Greetings from Charlotte, North Carolina, where summer is in full swing (the opening picture is yet another from our trip to Willard over the Independence Day holiday – Abby and Gus in “full throttle”).  This week we will discuss the never-ending engagement that is the T-Mobile/ Sprint merger.

A quick note before we dive into this week’s topic:  We are posting a Deeper section on the Website with links to key articles.  I found this living, breathing bibliography to be very useful with clients and welcome your feedback (articles we should have included, format, etc.).

A Chronicle of the T-Mobile/ Sprint Courtship

For those of you who have been hiding under a rock, here’s the timeline of the T-Mobile/ Sprint courtship from the past five years (we’ll have more timeline for readers in the Deeper version of this article on the website): 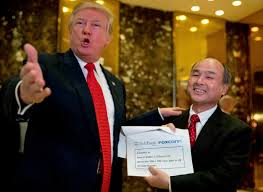 December, 2016:  Masa Son visits President-elect Trump and commits to a $50 billion investment in the U.S. that would create 50,000 jobs.

February, 2017:  Rumors begin to surface that Sprint and T-Mobile will merge and that Sprint is willing to cede control (Reuters article here).

November, 2017:  Sprint and T-Mobile announce that they had ended merger talks (NYT Dealbook article here and joint press release here).  Talks break down this time over who would control the new company’s Board of Directors (WSJ inside story here). 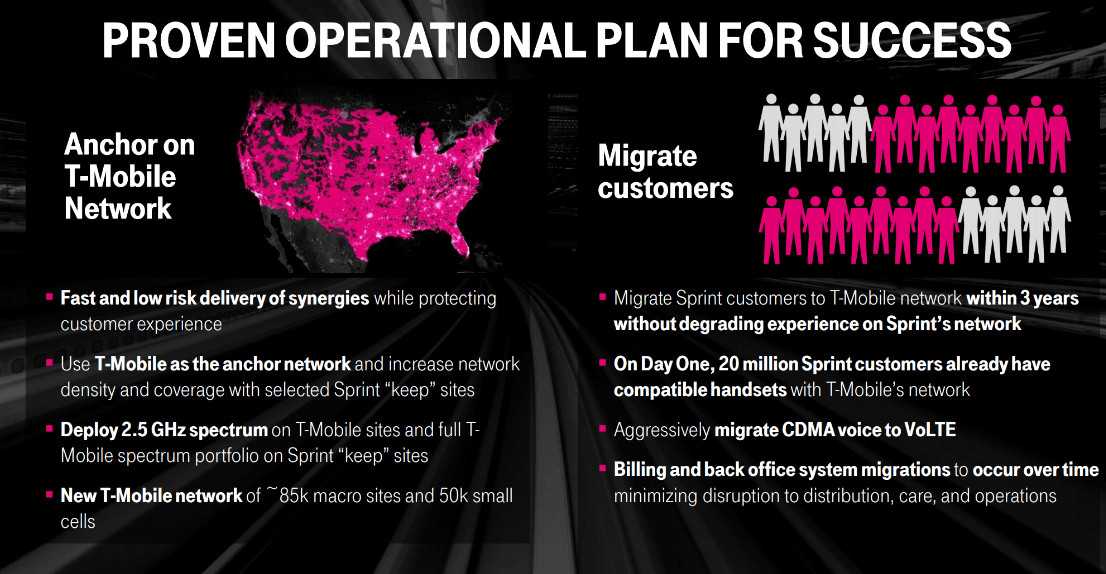 April, 2018:  T-Mobile and Sprint agree to merge in an all-stock deal valuing Sprint at $26.5 billion.  The combined company would have $55 billion in enterprise value and $60 billion in debt.  T-Mobile parent Deutsche Telekom (DT) would own 42% of the new company but control 69% of the voting rights and appoint 9 of the 14 Board seats (WSJ article here; formal announcement here; investor presentation here).  John Legere to serve as CEO and Mike Sievert to serve as COO of the new entity.

September 2018, January 2019, and March 2019:  Federal Communications Commission (FCC) stops the merger clock three times to obtain and analyze information related to the merger.  As of this writing, the 180-day merger approval clock is on Day 222 (FCC timeline here).

December, 2018:  Committee on Foreign Investment in the United States (CFIUS) approves the merger.

April, 2019:  T-Mobile and Sprint delay the merger deadline to July 29 (Reuters article here and CNBC interview referenced in the article is here).

May, 2019:  The Federal Communications Commission’s (FCC) Chairman throws his support behind the merger under the conditions that rural broadband coverage is increased, 5G rollout commitments are met, prices are frozen for the next three years while the buildout is underway, and that Boost is divested (see FCC statement here).  The formal vote is expected in the next few weeks.

May 30, 2019:  Reuters reports that Amazon is interested in buying Boost Mobile and any wireless spectrum that would need to be divested.  Amazon neither confirms nor denies the report.  Craig Moffett pens one of the best blog posts on the topic called “Sprint and T-Mobile: Welcome to Crazy Town” in which he dismantles the arguments that a) Amazon would want to buy, and b) that Deutsche Telekom would want to sell to Amazon.

May 31, 2019:  Comcast issues a statement saying that they are not interested in buying the Boost Mobile business or wireless assets after David Faber (of Comcast-owned CNBC) reported that they might be interested.

June 11, 2019:  Thirteen states and the District of Columbia sue to block the merger.  A start date for the trial is set for October 7.  Two additional states (Texas and Indiana) report to the FCC in June that they are investigating the merger but do not join the lawsuit.  (Articles here and here).  T-Mobile, in their response to the court, claims that these states are “Living in the past” (full document from Scribd here).

June 18, 2019:  Bloomberg reports that Charlie Ergen, CEO of Dish, is close to striking a $6 billion deal with T-Mobile to purchase Boost and some wireless assets.

July 12, 2019:  T-Mobile and Sprint delay the merger deadline past July 29.  Deal terms imposed by T-Mobile and Deutsche Telekom surrounding maximum network usage percentage of the new Sprint/T-Mobile network for the interim period and third-party ownership of the new Dish are reported to be the holdups (WSJ article here).  Note:  per the merger agreement, the drop-dead date is October 29, 2019 – see page 33 of the Letter to Shareholders).

Are you exhausted yet?  Hopefully not, because this ballgame is going to go a few more innings.  The bottom line from this timeline is that Sprint/Softbank went from an acquiring position to an acquired position in a short amount of time.  Because of their large debt load (driven in part by ~$13 billion in Sprint and Nextel affiliate acquisition debt incurred a decade earlier), Sprint’s competitive options are limited.  Meanwhile, Verizon and AT&T continue to tap the capital markets for network buildouts and spectrum purchases to build their lead.

Is Sprint as Attractive Now as they were in April 2018?

One of the issues with long engagements is that things can change.  The beauty of the merged entity vision, the promise of network and distribution synergies, the allure of attractive competitive positioning can dull after 18 months.  The questions DT shareholders might be asking are “Is Sprint still worth 0.10256 T-Mobile shares?” and “Can we achieve more value by just buying Dish or pursuing another structure with Sprint?”

Nearby is a snapshot of Sprint’s postpaid phone, prepaid phone, and net debt situation.  Here’s what’s going on: 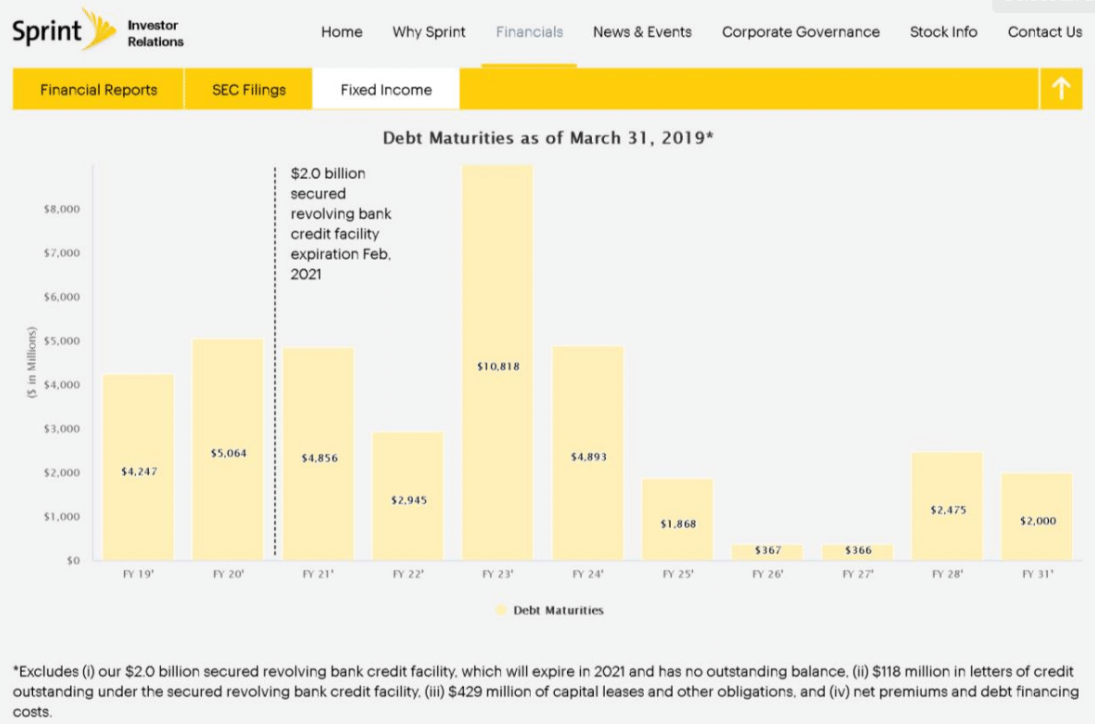 Is Sprint as attractive as they were in April 2018?  The short answer is yes, but they were quite homely a year ago.  How Sprint can persevere while spending money on needed network upgrades given the $9.3 billion in redemptions coming due over the next two years remains to be seen (see chart from Sprint’s Investor Relations website nearby). It’s likely to be a painful financial restructuring should the merger end up being scuttled or significantly delayed.

I’ll close this week’s discussion with the last Q&A on Sprint’s May 7 Earnings Conference call:

There is the possibility that at some point over the next weeks or months that we wake up in the morning and the likelihood of a T-Mobile merger comes down quite a bit. Given these concerns and comments that you have just expressed to us, what should we be then making of the prospects for the company looking out a few years from that?

… We remain optimistic that the government will see a compelling argument in support of our merger…If the merger doesn’t go through, we expect to continue to make improvements to the business, including our Nexgen Network deployment… We will have to reposition the company, reposition the company in how we play and which battlefield will be ours. While Sprint has made a lot of progress improving network and financials, as I have just mentioned, we still lack, let’s say, we still have offsetting challenges that I’ve mentioned, which means that we will have to reduce, of course, our promotional activity in the market, we’ll have to narrow our geographic focus. So at the end of the day, that means that we will be less of a nationwide competitor to AT&T and Verizon. So that’s site based, and we’ll have to reposition the company that way.

Next week, if the merger has not been approved, we will attempt to answer the question “Should T-Mobile buy Dish instead?”

Until then, if you have friends who would like to be on the email distribution, please have them send an email to sundaybrief@gmail.com and will include them on the list.  We have been overwhelmed by requests this week (over 200 added since last Sunday) and greatly appreciate your continued interest and advocacy.