Smartphones and Rate Plan Announcements – Do Any Make Sense? 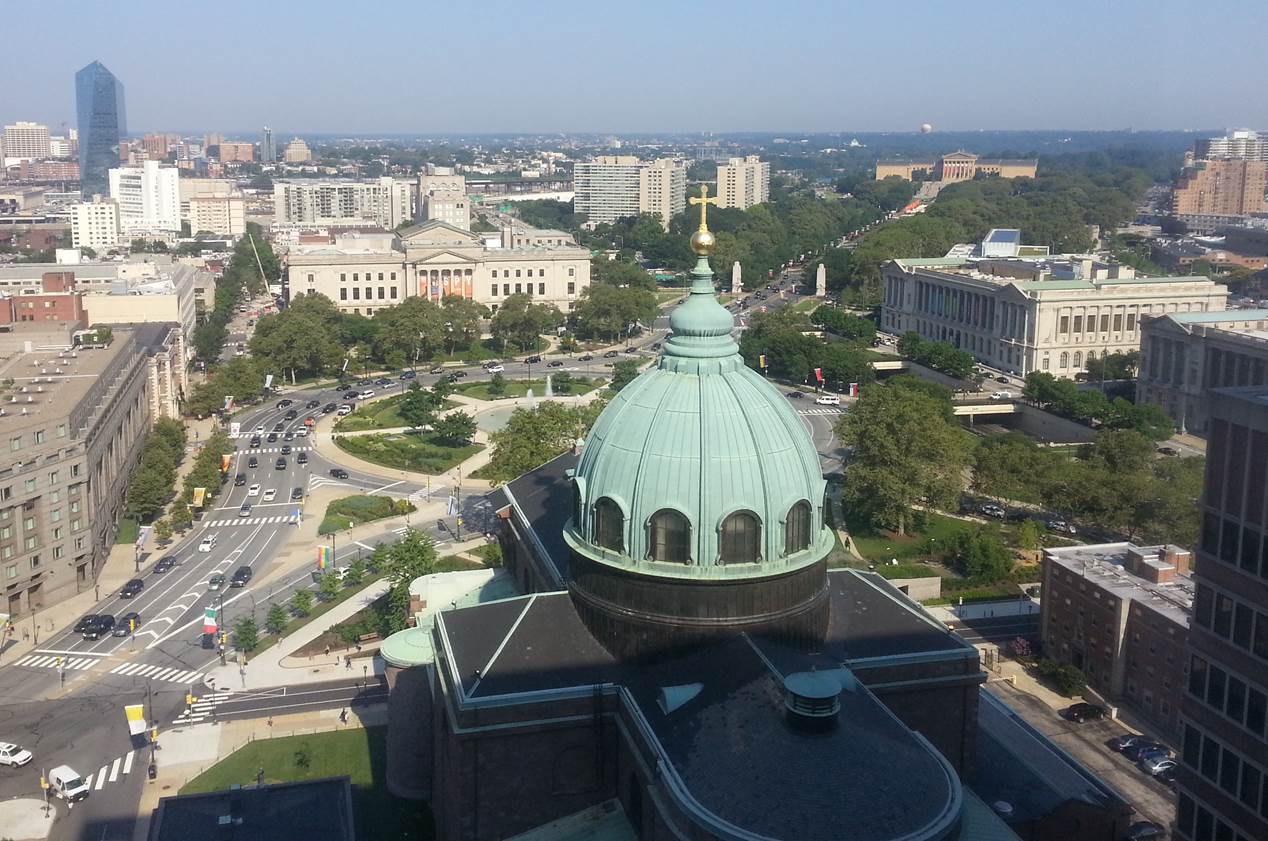 Greetings from Dallas, Denver, Philadelphia (pictured) and the overheated New York City.  This week was full of change, from Microsoft’s $900 million Surface RT tablet write-off (see the Tech Crunch article here) to the dismal Nokia earnings (BGR summary here), to Google’s mixed earnings release, to Charter’s seismic aspirations to acquire Time Warner Cable, to what could be the largest “going dark” event in the ongoing retransmission saga between cable and content, the week did not lack for big news.  On top of this, Verizon Wireless had their quarterly earnings call.

Before digging into the pricing and phone plan changes announced by each of the four largest carriers over the past month, let’s get a quick “health check” of the industry through the eyes of Verizon.  On Thursday, the telecommunications giant announced impressive earnings and cash flow growth, driven almost entirely by their wireless segment.

First, the bad news:  Verizon has a wireline unit that, despite continued investments in fiber, cannot manage to offset its losses from legacy technologies to earn a profit.  With the exception of FiOS Internet and Video, the rest of the business is largely a victim of increased wireless substitution, VoIP (as opposed to traditional TDM voice) penetration, cable competition, and the cloud.

Structural issues create competition within the company for enterprise wallet share.  New markets, such as cloud, have new competitors who are more expert in computing and data center management than Verizon.  If there is an economic recovery, it’s not showing up in the results.  If you are managing the wireline business, there’s plenty to be worried about at Verizon.

In fact, as we have said many times, if all they had were a wireline unit, they would not be a going concern.  Have a look at Verizon’s consolidated liabilities (note: Verizon reported $2.41 billion in cash & marketable securities):

On the conference call, Fran Shammo responded to a question about Verizon Wireless’ share of that.  He responded:

On the update of the net debt for Wireless, gross debt is at $10.1 billion and net debt is $9.7 billion. And as you know, we did a distribution at the end of June of a total of $7 billion out of the partnership to both of the owners.  Also just to keep in focus here, we have about $1.5 billion of Wireless debt coming due in the fourth quarter this year and another approximately $3.5 billion coming due in the first quarter of next year and we plan to pay that debt off at this point in time.

But that is not the case.  As we have discussed many times, wireless is a growth and cash machine.  As Fran says above, they have $10.1 billion in debt and are generating $8.5 billion in EBITDA per quarter ($31.8 billion the past year).  When they finish paying off $5 billion in debt at the end of the year, they will have a cash flow to debt ratio of 0.16.  That’s a Google or Apple level, and, most importantly, it’s not a Sprint, T-Mobile, or AT&T level. 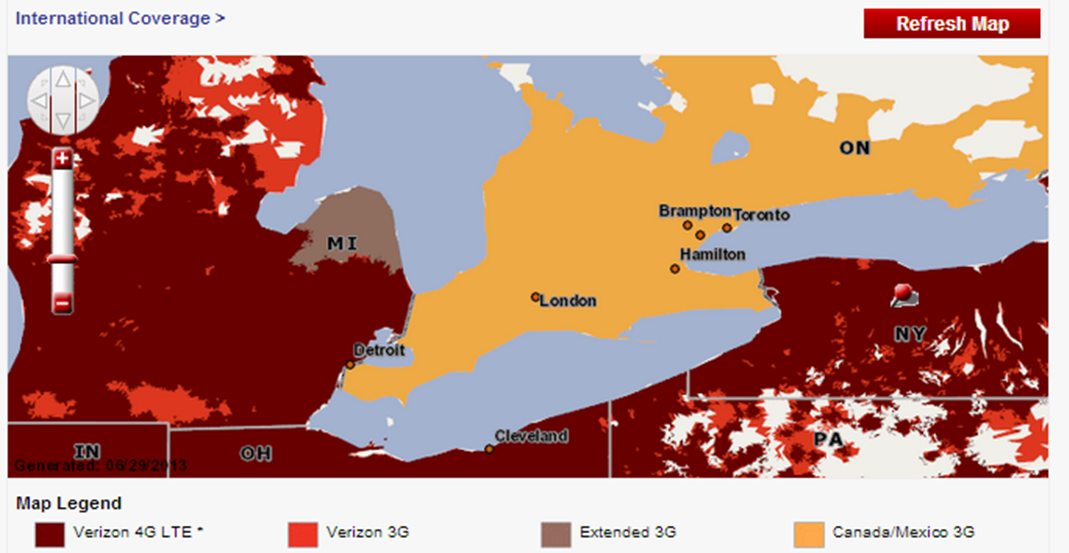 What will Verizon do with the over $6 billion in quarterly post-capital expenditures free cash flow it generated in the second quarter?  They will not make a bid for Leap.  They will actively explore the Canada market (Fran’s quote: “If you look at the population of Canada, about 70% of that population is between Toronto and Quebec. That’s adjacent to the Verizon Wireless properties. Again if you look at the spectrum auction, it mirrors up exactly what we launched here in the United States on the 700 megahertz contiguous footprint.”).  Looks like someone has been reading The Sunday Brief (the picture is the same one we used in the July 1 earnings preview issue of TSB).  How will Verizon invest its free cash flow?

Verizon Wireless will also have to sing a few verses of “He’s Ain’t Heavy, He’s My Brother” (a classic video link worth watching) as they assist in lowering the liabilities of the Telecom unit.  But where would you rather be – with a pre-Clearwire (Q1 2013) Sprint of $4.4 billion of annual adjusted EBITDA and $16.7 billion in net debt (3.8x net debt to EBITDA ratio) with several quarters of LTE investment and Clearwire integration remaining, or at Verizon Wireless’ 0.16x end of 2013 ratio with $24 billion in post capital spend free cash flow over the next four quarters to invest?

One thing is for certain, Verizon has chosen not to invest in acquiring postpaid customers through aggressive plan changes at this time.  Their Edge announcement is great if you have to have the latest technology.  For example, if you wanted the latest Nokia Lumia 928 (retail price = $450), you could pay $18.75 per month for 24 months for a) the right to upgrade after the first year, and b) no contract limitations.  Or, if you paid the same $100 as you would in a traditional post-paid agreement, you could get a new phone after 7 months (50% of the balance is paid off).   With a Samsung Galaxy S4 ($650 retail price), the new phone interval with $200 down is 17 months.

The issue with Verizon’s Edge and AT&T’s Next programs is that they fail to couple plan relief with the handset subsidy.  To the consumer, both represent short and long-term drains on disposable income (and we have discussed many times how many Americans live paycheck to paycheck). 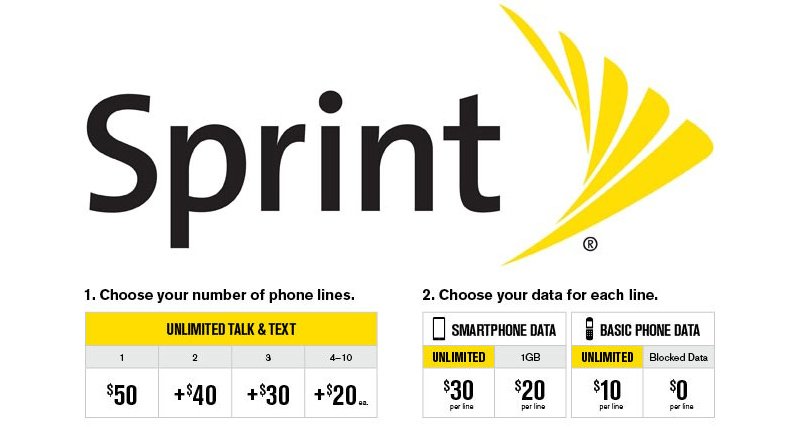 Let’s consider a family of four that wants to move to Verizon from another carrier.  They have four smartphones and will consume 6GB of data per month.  With Verizon’s Share Everything, that would cost $240 per month plus $108 per month in Edge payments.  With Sprint’s new My Way Plan, that would cost at least $220 per month ($140 + $80) and yield 2GB less total data and no sharing capabilities.  However, with current promotions, the family could get four new Samsung Galaxy S4s for $400.  If the family could determine who would be using the most data (it’s probably inversely related to age), there’s a strong case that Sprint’s plan could be of equal cost but more valuable over the short and long-term than Verizon’s.

T-Mobile has a new, but not necessarily as compelling, offer.  For the same four Galaxy S4 phones, and on the JUMP (Just Upgrade My Phone) plan, the family of four would be paying $140 (2.5 GB per line) + $80 in phone installment payments + $40 in JUMP plan payments (which includes phone insurance and mobile security) + $600 in phone deposits.   That’s $260 per month + $600 in out of pocket costs.  If the family has good credit, Verizon’s Edge/Share Everything plan is competitive.  Sprint’s smartphone promotions (which will not end with the BOGO Galaxy S4 promotion) are compelling as well.

The problem is that consumers have to do a lot of math to figure this out.  Store reps do not like to do a lot of math and neither do consumers.  They have been trained to look for 2-yr promotional pricing, and, with T-Mobile’s recent success, perhaps consider this against a monthly payment plan alternative.

The bottom line for consumers is “WAIT and SAVE.”  After 120 days from initial launch, the Blackberry Z10 went from $200 to free for both Verizon Wireless and AT&T customers.  The heavily subsidized $100 Nokia Lumia 928 is now $30 on Amazon with contract.  A family of four can get free Samsung Galaxy S3 devices on Amazon if they are switching.  More phones, including a bunch of free LTE devices can be found on the attached table in a recent Sunday Brief post.

If consumers can wait six months to a year prior to buying their next device, they are probably better off pocketing the savings and using the balance to self-insure their device.  That will certainly not end up being the case for many Americans, but the surcharges required for “latest and greatest” phone status are generally not worth it.

Next week, we’ll put the microscope to AT&T’s earnings.  Until then, if you have friends who would like to be added to this email blog, please have them drop a quick note to sundaybrief@gmail.com and we’ll add them to the following week’s issue.  Have a terrific week!