The Domino Effect of Contagion and Market Turbulence

Greetings from Davidson and Charlotte.  Contrary to the cacophony of conjectures regarding the market impact of the convergence of cartels and contagion, we choose to place the inspiring “young guns” from Lucid Drone Technologies front and center this week.  Andrew Ashur, their CEO, is standing on their new trailer setup.  After what appeared to be a never-ending string of successes (and my continued assertions that “It’s never this easy”), they recently learned a lesson about their award-winning solution:  No matter how well the drone performs, if the pump isn’t working, you can’t clean.

While Andrew and the rest of the team quickly adjusted and easily replaced their pump solution, they provide a lesson for these turbulent times:  Recovery is imminent if you keep focused and power through the problem.

The Domino Effect of Contagion and Market Turbulence

Enough preaching.  It was a very turbulent week in the markets with all sectors giving back some portion of 2019’s gains.  Here’s a quick summary of action from the past 3 weeks:

Even with the terrible week that was (over half a trillion dollars lost between these 10 companies), we have 83% of 2019’s gains for the Fab 5 and 63% of the gains for the Telco Top 5 still intact.  There’s still a lot of news to be made (Apple’s decision to shut all non-China stores is going to hurt), but Apple is still up 79% from the beginning of 2019 (interestingly, Apple’s share closed higher on Friday than Feb 28 – perhaps they follow the Chinese economy as much as the rest of the world).

More “fibernating”  (working from home) is going to strain broadband networks this week (and, with kids home, Mom’s Zoom videoconference is going to be contending with junior’s Rocket League play – isn’t net neutrality great?).  Can Comcast, AT&T, FiOS, Spectrum and other networks handle increased daytime data needs?  Of course (more on that assessment here from David Belson of The Internet Society) .

Will wireless networks be able to keep pace with the increased Minutes of Use (MOU) brought on by telecommuting (VoLTE, VoIP, and good ol’ 3G technologies)?  That could be more of a challenge in some locales, but likely yes (for those Spectrum, Cox, and Comcast Sunday Brief readers, perhaps a “work at home” digital phone conference call promotion might be useful).  Corporate VPNs will be taxed (along with Slack usage) but overall, the network can support a longer busy hour in residential neighborhoods.

The question after fibernation ends is “What’s the new normal?”  Management and collaboration will adapt to a more disparate work environment thanks to products like Microsoft Teams and Evernote for Groups.  A 30-second versus a 30-minute commute will cause many to rethink their schedules (we don’t think it’ll be a binary change, but summer scheduling in many office environments will likely be more accommodating – in a very strange way, this might even help WeWork).  And, like we saw in 2001 and during the Great Recession, home office improvements will increase.  Better laptop cameras, portable green screens (with great digital backdrops), noise-cancelling headphones, Bluetooth speakerphones, Wi-Fi access points (with smartphone apps that control how much data Mom gets for the aforementioned Zoom videoconference), lighting, work spaces (beyond the kitchen table), and even “work from home” attire will all be purchased.  We also think it helps the local coffee and sandwich shops – please support them!

When it all ends, however, economic pressures will result in more video cord-cutting (see regional sports network discussion below).  Cable MVNO revenues ($45 for unlimited talk/ text and 20 GB of Verizon data, taxes and fees included) will look increasingly attractive up through two- line family plans (and by-the-gig for very low users).  And phone lines could drop even further post-fibernation as alternatives (VoWiFi, VoIP) are more widely adopted.  Without a doubt, economizing will be an important theme through the end of 2020.  Launches of AT&T TV (new platform that is 20-30% more than YouTube TV and has 2-yr exploding contracts) or HBO Max or Quibi will face headwinds.  Interestingly, Comcast could be a big winner here with their Peacock OTT launch which comes free to select Comcast users (same for Disney+ and their on-going relationship with Verizon).  Outside of the Comcast family, it’ll be the same struggle as Quibi and AT&T face – less discretionary spending as hours (and pay) are cut.

The biggest economic concern, however, for the telecom providers is regional sports networks (RSNs).  Baseball season is right around the corner, Spectrum owns the rights for all Los Angeles Dodgers broadcasts, and opening day is delayed by at least two weeks.  The NBA playoffs might be cancelled (The Wall Street Journal reported this week that ad revenues for the 2019 NBA playoffs alone were over $970 million) – what’s the effect on AT&T’s TNT network?  And Comcast has their own RSNs, the Olympics, NHL and NBCSN (and NBC regional sports networks) – what’s their impact?  Then there’s CBS (no Masters or March Madness) and Disney/ ESPN.  Would a weakened value (Viacom CBS market cap down 62%; Disney down 29% YTD) suddenly become attractive to Verizon, or even Google/ Apple?

Bottom line:  Market forces, by nature, attempt to price in risk.  There are many variables in play, and companies like Comcast, Spectrum and AT&T face more headwinds than Verizon and T-Mobile.  The economy was strong (last jobs report is here), but recovery, while inevitable, takes time.

This rest of this week’s Brief will focus on several other events that were overshadowed by the market’s turbulence.

Frontier skips their coupon payment: Let the fun begin.  In the middle of the swirl of market headlines this week came an expected thud – Bloomberg reported Tuesday that Frontier Corporation was going to skip the coupon payment of their March 15 debt and trigger a 30-day grace period, an event that will result in a pre-packaged Chapter 11 bankruptcy filing.

The company’s shares, which traded at $1.00 to end 2019 (and which touched $11.60 as recently as April 2018), closed on Friday at $0.35. Frontier was one of the most frequently mentioned merger candidates in the mid to late 2000s (article here implying an equity takeout value of $4.4 billion from Reuters here).  That valuation preceded their deals to purchase the former GTE assets from Verizon (in 2009 and again in 2015).

We have written on Frontier’s missteps many times, most notably here in our column titled “Fiber always wins (until it doesn’t)” and will refer new readers to that column for a primer on how the Stamford-based company drove into the ditch (full bibliography on that article here).  A cocktail of high dividends, high debt, and poor acquisition execution is driving what will likely be the third largest bankruptcy in telecommunications history (joining WorldCom, Global Crossing, Adelphia, NTL, Exodus, PSINet, Metromedia and others).

After the filings and finger pointing, the question will quickly become “Who will buy this asset?”  For a look at what territories are available (by acquisition phase), here’s a slide from Frontier’s Q1 2015 earnings presentation:

The purchaser answer could be dependent on who wins the Cincinnati Bell asset (which appears to be Macquarie based on this week’s activity).  There is also an opportunity to split rural and metro locations with multiple buyers for each.  More to follow in upcoming Briefs.

T-Mobile announces their new leadership team.  On the heels of the California Public Utility Commission (PUC) and multi-state Attorneys General announcements last Wednesday (both great news), T-Mobile announced their new senior leadership team on Thursday (SEC filing of internal companywide email here).  It does appear that CFO Braxton Carter might be staying on longer than July 1, and the company promoted wireless industry veteran Susan Loosmore into the #2 role reporting to Braxton.

On the technology side, no real surprises, although very pleased to see John Saw, one of the global experts on 2.5 GHz spectrum, named as EVP – Advanced and Emerging Technologies.  He’ll be joining current T-Mobile CIO Cody Sanford and current T-Mobile CTO Abdul Saad as part of Neville Ray’s team.

On the consumer and business segments, it’s largely the T-Mobile senior leadership team as expected.  Dow Draper will be joining the team from Sprint in a new role as EVP – Emerging Products.  Deanne King will be taking the reins as the new Chief Human Resources Officer, and current Sprint COO Nestor Cano will serve in a transformation officer role.  Overall, this is an extremely strong leadership team which largely builds on the relationships forged through T-Mobile’s eight-year transformation.  Sprint will add a lot of enterprise relationships to new T-Mobile as well as a Tier 1 Global IP Backbone.  It’s likely business (SMB and Enterprise) will have more Sprint influence than the senior leadership announcement shows.

What can more deployment of Band 41 do for Sprint’s RootMetrics results?  A lot.  Last week, we discussed the significant speed improvements that AT&T experienced as a result of their FirstNet deployments (RootMetrics metro reports are here).  As we were analyzing the results, however, we kept coming back to Sprint’s download speed improvements (Note that none of these markets are on the current True Mobile Sprint 5G list):

There are another eight markets with similar improvements. As a former Sprint MVNO (Flash Wireless), we searched high and low for download strength.  Denver, Salt Lake City, Chicago, Houston, San Jose, Dallas and most recently Los Angeles and New York were consistently strong, but secondary markets were not a focus.  We would be extremely happy if Sprint ever broke out of 4th place, let alone tie for 2nd in Minneapolis, Hartford, and Scranton.  What could this mean?

Bottom line:  While we wrote about T-Mobile’s pre-preparation efforts, we did not think about Sprint’s parallel network activities.  At Day 0 (which we presume is now May 1), there will be a very robust LTE network ready for new T-Mobile customers in the cities above as well as at least eight others.   This is also excellent news for MVNOs (including a Dish-owned Boost).  I can hardly wait to see what RootMetrics finds when they test the True Mobile markets listed in the link above (although, if all of this improvement came simply from deploying more Band 41 spectrum, one really has to question Masa Son’s and Marcelo Claure’s judgement).

Senator Kennedy sounds off on $9.7 billion in C-Band relocation payments: “You can get a better deal… You are going to get sued anyway.”  This week, the FCC went before the Senate Financial Services Subcommittee to get their 2021 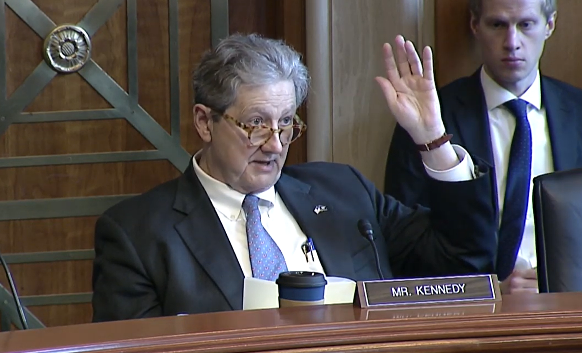 budget approved.  That hearing turned into a 10-minute discussion on C-Band relocation funding.  Rather than go into too many details, I’ll just include a picture of the Senator as well as a YouTube link to Senator Kennedy’s portion of the questioning (best comments are at the end of the link).  Verizon needs mid-band spectrum and cannot afford lengthy court delays.  More to come on this in the following months.

The telecom industry responds to Coronavirus with more data and broadband availability.  While most of us have seen individual announcements, here’s are links and summaries of the changes being put into place by each carrier:

This list will change periodically – please send any corrections to sundaybrief@gmail.com.  If your company is not included in the list above, we will be posting the complete list (with links) as a Deeper post at www.sundaybrief.com.  Many thanks to each company above for their support and concern for customers and employees during these turbulent times.

That’s it for this week.  Thanks again for your readership.  Please keep the comments and suggestions coming, and, if you have time, check out the new and improved website here.  If you have friends who would like to be on the email distribution, please have them send an email to sundaybrief@gmail.com and we will include them on the list (or they can sign up directly through the new website).

Have a great week!