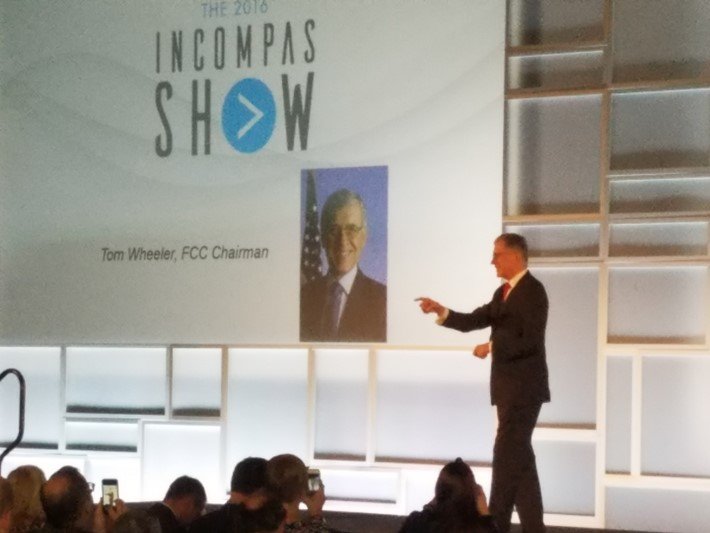 Tax Day greetings from Washington DC (where I chaired a terrific discussion at INCOMPAS), Chicago, Charlotte, and Dallas.  Thanks to everyone who showed up at the panel and participated – all of the speakers on Monday were great, including Chairman Tom Wheeler (pictured).

This week, we continue to chronicle the developments of the Set Top Box saga as the Obama administration weighed in through the NTIA with comments.  We’ll also weigh in on the controversial “Ghettogate” ad.  First, however, we’ll look at a study of balance sheets across the telecom industry which was released last week by Craig Moffett.

With continued densification (smaller cell sites in more places), spectrum acquisition, and competition, many investors turn to leverage ratios to benchmark long-term financial health and viability.  These ratios are not the first thing that companies highlight in their press releases, but many calculate and discuss their net debt to EBITDA metric.  Here’s that definition according to Investopedia:

Using that standard definition, communications company metrics would look like this: 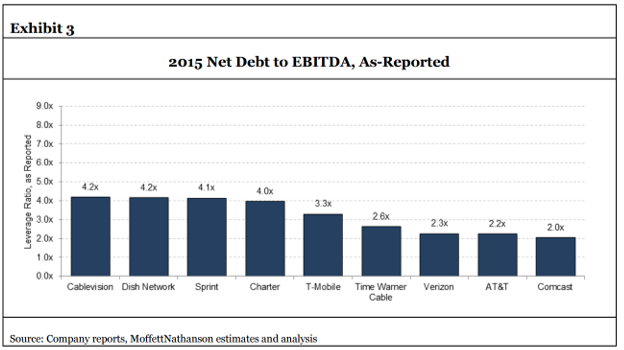 From a first glance, this looks as expected to most who follow the telecom industry.  Verizon and AT&T maintain low leverage ratios and as a result are afforded low interest rates.  Cablevision, Dish, Sprint, and Charter have historically been able to use high-yield debt markets to finance operations, spectrum purchases, stock buybacks, and other investments.  T-Mobile and Time Warner Cable lie somewhere in between.

Telecom is not a typical industry, however.  With Equipment Installment Plans (which entails moving away from subsidy and into subscriber-paid devices) and phone leasing proliferating, more “debt” is being created and sold to third parties at growing rates.  Operating leases create pressure on EBITDA but also frequently mean long and non-cancelable commitments for telecommunications carriers.  And pension obligations represent a promise to employees that rarely enters into leverage discussion dialogue. 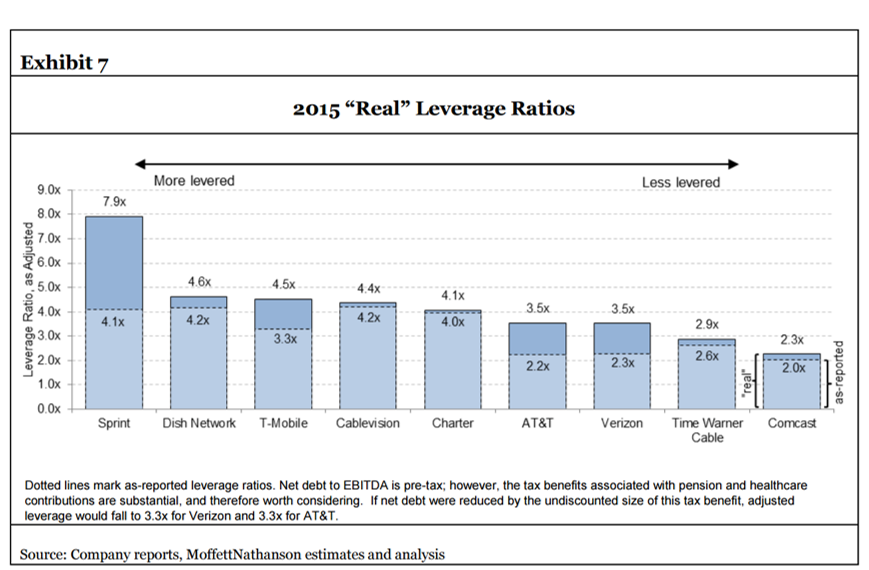 MoffettNathanson’s adjusted leverage ratio schedule is shown to the right.  In this view, the relative health of each carrier is different than what was previously reported.  Verizon and AT&T look more like Cablevision and Charter thanks to large pension liabilities, even when the undiscounted size of the pension contribution tax credit is considered.  Comcast appears to be the healthiest of the industry with Time Warner a distant second.  Sprint’s revised ratio is a whopping 7.9x driven in large part by the reversing of the leasing construct.  While it should be emphasized that nothing is truly “real” in the accounting world, this analysis provides some insights into the high-yield market’s reluctance to lend the company money at reasonable rates.

Craig Moffett did a Bloomberg interview on the topic (see here) and his detailed analysis is only available to MoffettNathanson clients.  However, if you can get a copy of their work, it’s worth digesting and is on par with the seminal analysis on telecom affordability Craig did in his Bernstein days.

Since our article analyzing the Notice of Proposed Rulemaking was written (see here), there has been a lot of discussion across many constituencies as to who would benefit and suffer the most.  In the Sunday Brief devoted to the topic, we mentioned how this is pitting entrepreneurs against established programmers.  It’s also pitting Democrat Congresswoman Anna Eshoo (California), the ranking member of the House Energy and Commerce Subcommittee on Communications and Technology against Democrat Senator Bill Nelson (Florida), the ranking member of the Senate Commerce Committee.  Representative Eshoo is a supporter of the FCC’s initiative while Senator Nelson wants to study the implications of opening up the Set Top Box market in greater detail (Nelson is supported by the National Urban League, the National Action Network, and the Rainbow/ PUSH Coalition).

To make matters more complex for policymakers, President Obama decided to weigh in on Friday, devoting his weekly radio address to the set top box issue.  Here’s the situation assessment according to the White House (full blog address here):

… the set-top box is the mascot for a new initiative we’re launching today. That box is a stand-in for what happens when you don’t have the choice to go elsewhere—for all the parts of our economy where competition could do more.

Across our economy, too many consumers are dealing with inferior or overpriced products, too many workers aren’t getting the wage increases they deserve, too many entrepreneurs and small businesses are getting squeezed out unfairly by their bigger competitors, and overall we are not seeing the level of innovative growth we would like to see. And a big piece of why that happens is anti-competitive behavior—companies stacking the deck against their competitors and their workers. We’ve got to fix that, by doing everything we can to make sure that consumers, middle-class and working families, and entrepreneurs are getting a fair deal.

If that weren’t enough, the President’s National Telecommunications and Information Administration (NTIA) filed supportive comments with the FCC (read more about them here).  For those of you who are new to the process, the NTIA is managed under the Department of Commerce and the administrator of the Broadband Technology Opportunities Program (BTOP), one of the biggest boondoggles of the past decade (see New York Times article on BTOP titled “Waste is Seen in Program to Give Internet Access to Rural U.S.” here).

As we saw with the President’s actions on Net Neutrality (his YouTube message following the 2014 election is here), this administration is not afraid to use the power of the bully pulpit to influence the FCC.  Without rehashing the previous article, and to continue in the spirit of problem-solving, here’s a few questions I would suggest the FCC carefully consider:

No one can defend the current state of the Electronic Programming Guide (with the exception of the Xfinity X1/X2 and the Tivo Bolt).  But to state that there is no set-top box competition when Tivo clearly positions itself as an alternative for digital cable providers is deceptive.  And to fail to acknowledge that Google will financially benefit from search result rankings, and that entrepreneurs will have to pay up to achieve a top page ranking, is equally deceptive.  The transition of value from cable companies to Google, Apple and Microsoft is apparent to anyone who digs deeper, and should receive the same bright spotlight that communications service providers have received throughout the entire Open Internet process.

More than a few heads turned when Sprint released (and subsequently retracted) the following ad:

Sprint CEO Marcelo Claure, talking to focus group but specifically addressing woman sitting to his right: “I’m going to tell you the carrier name, and I want you to basically tell me what comes to your mind.  T-Mobile.  When I say T-Mobile to you, just a couple of words.” 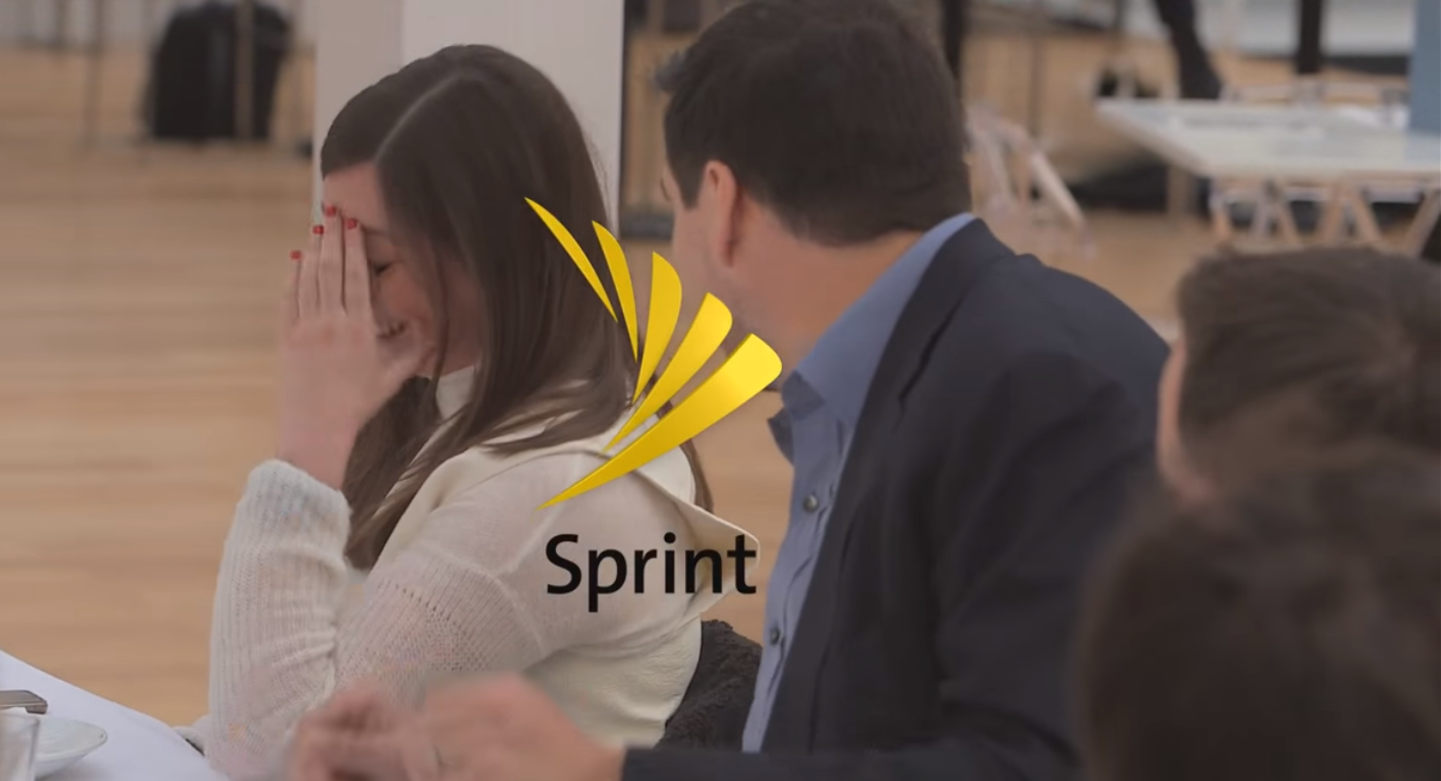 Woman sitting to Claure’s right: “Oh my God, the first word that came into my head was ghetto (laughter, Claure nods and smiles in approval).  That sounds like terrible.  Oh my God, I don’t know.  Like, I just felt like that there’s always like three carriers.  It’s AT&T, Sprint and Verizon.  And people who have T-Mobile, it’s like “Why do you have T-Mobile?” I don’t know.

For those of you who are struggling with the definition of ghetto, here’s the version from dictionary.com:  a section of a city, especially a thickly populated slum area, inhabited predominantly by members of an ethnic or other minority group, often as a result of social or economic restrictions, pressures, or hardships. 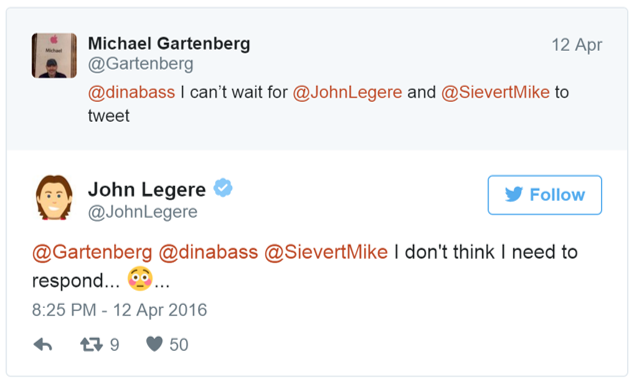 Sprint had the sense to pull the ad, and Claure apologized, but his Twitter posts triggered intense reaction from many of Claure’s followers.  Interestingly, John Legere, T-Mobile’s CEO, declined to comment other than the exchange nearby.

This is probably an innocent mistake, a miss due to personnel changes occurring within Sprint’s marketing department.  Or perhaps Claure did not understand the racial undertones of the word ghetto.  Regardless, it provided some unneeded attention this week for the struggling carrier, and Sprint (and Boost) customers can rest assured that it will not occur again.

Thanks for your readership and continued support of this column.  Next week, we’ll dive into Verizon’s earnings as well as the Open Internet Order ruling if it is released.  Until then, please invite one of your colleagues to become a regular Sunday Brief reader by having them drop a quick note to sundaybrief@gmail.com.  We’ll subscribe them as soon as we can (and they can go to www.sundaybrief.com for the full archive).  Thanks again for your readership, and Go Royals and Sporting KC!