Greetings from Davidson, North Carolina, home of the Jay Hurt Hub for Innovation and Entrepreneurship (known locally as “The Hub”).  They had their 1st Birthday party last Thursday and 230 turned out (including yours truly).  The Hub serves not only as a world-class incubation center, but also as a “door” between Davidson College and the surrounding community.  It was great getting to meet several dozen entrepreneurs who are making it happen, including my good friends at Lucid Drone Technologies.

This was an extremely busy week with second quarter earnings, a landmark antitrust lawsuit, and DOJ approval for the Sprint/ T-Mobile merger.  We also gave two major presentations this week: 1) Basics of IoT (given to Charlotte-area CIOs), and 2) Ten Telecom Trends Worth Watching (given to several dozen institutional investors).  While we are going to cover each of these topics in future TSBs after earnings season has ended, we would be glad to quickly cover/ discuss/ debate these with your teams.  Please let us know if there is interest and we will schedule.

AT&T:  Continued high dependence on Communications division stability to provide cash for remaining divisions (and ~50% of Net Revenues and ~60% of Communications EBITDA is coming from Mobility); FirstNet deployment ahead of schedule; Prepaid mobility net adds strong (completely offset by reseller losses); Postpaid upgrade rate lowest ever at 3.3% of base (helped Mobility EBITDA); DirecTV and DirecTV Now subscriber metrics down a combined 940K+  (Dish announces financial and operating results Monday); Fiber net adds of 318K and they now penetrate ~25% of current deployed footprint (fiber gains offset by non-Fiber U-Verse losses of the same amount and 34K DSL losses); Business revenues growing (sequentially including wireless up 2.9% and y-o-y up 2.3%), but margins still soft with legacy voice/data product losses outstripping gains; Debt is being serviced (gross debt down ~$6 billion, net debt down $9 billion since beginning of year) and a buyback contemplated beginning in 2020.

Comcast:  Good times for Cable segment with strong revenue growth (up 3.9% year-over-year – lower than current dollar GDP growth of 4.6%) and margin expansion (up 7.4%);  High Speed Internet additions up 209K in quarter, with video down 224K and phone down 65K; Cable wireless MVNO growth of 181K customers (nearly all should be considered postpaid phone as eSIM for watches not added until end of 2Q) but $88 million EBITDA loss (equal to $20/ mo. per customer driven primarily by phone subsidies and advertising expenses); Cable Capex down to 11% of revenues but expected to rise in second half to 12-13% overall; NBC Universal flat; Sky reported revenues down driven by currency fluctuations (up year-over-year on constant currency basis).

Charter:  Similar to Comcast (as Craig Moffett correctly points out, “Comcast would look better if its portfolio looked more like Charter’s.  Charter would be better if its execution looked more like Comcast’s”); Overall growth of 258K High Speed Internet (includes business) subs in quarter, with losses of 182K voice and 151K video; High Speed Internet now has 51% penetration of total homes passed (this includes New York City – Verizon, and Los Angeles, Dallas, Ohio and North/South Carolina – AT&T); 208K MVNO subscriber growth but larger EBITDA loss than Comcast ($119 million or about $95/ sub/ mo.); Appears to be faster migration from residential phone to mobile than is seen at Comcast; Video programming costs only up 0.9% in the quarter; Commercial services growth up 4.7% (Comcast up 9.8%); Residential Capex down $850 million vs 2Q 2018; 99% of all cable plant DOCSIS 3.1 ready.

Overall, all three stocks are doing well this year and the story for each is one of post-merger integration performance.  On this front, as the chart nearby shows, Charter continues to outpace their nearest rivals when it comes to short-term value creation.

As this column spends a lot of time looking at challenger business models, it is definitely worth mentioning an excellent article in LightReading this week related to cable MVNO data usage (the assumptions are “in the ballpark” according to a well known consultant to the cable industry). We will discuss more in an upcoming TSB but worth pointing out the link for those of you who are following cable MVNO success.

Bottom Line:  Cable continuing to win disproportionate share of broadband decisions (likely above 100% – have to wait for CTL, VZ, WIN, Altice earnings releases) which continues to be worrisome; Charter/Spectrum needs a commercial services kick in the pants to get to a peer growth rate (and their recent reorganization which changes to reporting to the CFO will hurt, not help); AT&T reduces debt by riding a relatively stable wireless pricing environment to higher cash flows and preserves their dividend in the process; capital needs are stable to growing for wireless and plummeting for cable.  T-Mobile, which deserves its own earnings segment, grows revenues and free cash flow amazingly well in 2Q – more on that next week.

Software development is, by nature, soft – there’s no hard asset.  As such, the creation of new software is one of the lowest barriers to entry in our modern business economy.  Lots of people creating lots of software and making it as useful as possible to as many as possible is progress (and, as this column has argued over many years, there’s a lot of bad code out there that needs to be improved). Continuous process improvement creates user loyalty.  Lots of loyalty on the Internet creates an ever-larger communications/social network/base.  These large networks tend to be hard to break unless a) other software companies create more useful products/ user experiences (think Facebook vs. MySpace, or Snapchat vs. Vine, or Facebook vs. Google+), or b) they violate user trust (perhaps by selling or using information for nefarious purposes or not asking for user permission when it’s the right thing to do), resulting in less engagement.

Should the government exercise greater scrutiny over acquisitions?  Perhaps, if it appears that the effect of the acquisition will be to thwart competition (many saw Facebook’s acquisition of Instagram and WhatsApp as exactly that).  There’s a stronger case to be made that these acquisitions were made by Facebook to create an ad network to rival Google (and it got a lot bigger – see here), and that’s a good thing, right?

This does not excuse short-sighted and wrong-headed actions on the part of large participants.  Protecting freedom of speech is critical to the functioning of our society (and what separates us from regimes like China and Russia and Iran).  On a very small scale, I think Apple’s decision to not allow incoming phone numbers to be interrogated so we improve the communications experience (and better identify robocallers, scammers, and their ilk) is misguided, but that’s Apple’s call (pun intended) – Google, Samsung and companies like Hiya have made a mint providing really good call blocking/ identification solutions.  Apple is assuming carriers (and not WhatsApp/ Google Voice/ others) will control the person-to-person voice calling market for the indefinite future – I happen to disagree (as do many others – see below).

As this investigation pertains to communications, I am hoping that the DOJ of Justice and Federal Trade Commission (FTC) will find that the Federal Communications Commission (FCC) could do more via regulation (or at least persuasion) to drive a better consumer experience.  Universal carrier smartphones (now championed by Apple/ Google and Samsung, but resisted by carriers with cumbersome network certification processes), stored voicemail portability, over the top call/text identification, carrier equipment interoperability, and eSIM (which new T-Mobile and Dish have both agreed to and which would create significant competition) would all create a better experience for minimal cost.  Why did Assistant Attorney General Makan Delrahim choose to insist on eSIM as a part of the merger and not Chairman Ajit Pai?  It’s a question that should be asked.

I have not gone over the deep end (I started out my career in Sprint’s Local Telecom Division creating ARMIS reports and have resisted the heavy hand of regulatory bureaucracy over the past 25 years).  But if more competition can be created with better interfaces and information, and the inertia of size prevents a more open and competitive environment, then the FCC should intervene. 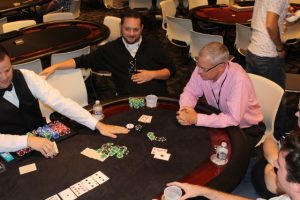 After leaving ACN at the end of June, I immersed myself in the T-Mobile/ Dish/ DOJ process (from this recent WSJ article, it sounds like Charlie Ergen, Dish’s CEO, was not engaged in the broader discussion until late May).  DOJ approval came on Friday, thanks to a lot of last minute negotiations (Dish’s SEC filing outlining their obligations is here).

This is a very good deal for Dish, and T-Mobile gets $40 billion in debt but also gets enough 2.5 GHz spectrum to provide a lot of wireless broadband to America.  We’ll play John Legere’s (and Mike Sievert’s) hand in next week’s TSB but here’s what Charlie has:

Medium card:    Access to capital to pay for the network

Medium card:    Ability to pay a fee and not take the 800 MHz spectrum

Low card:          Ability to earn revenues for leasing some 600 MHz spectrum to T-Mobile (although in his interview with LightReading, Charlie mentions it as having more value)

*How Dish is marketed to existing Boost customers is a topic that will get some discussion this week in the media.  Unfortunately, marketing Boost to rural current Dish customers is not feasible today but will be if new T-Mobile keeps their commitments.

It’s presumptuous to provide any advice to a brilliant card shark like Charlie, but here’s what might make his good deal even sweeter:

Next week’s issue will balance remaining earnings news with a discussion of T-Mobile’s hand.  If you would like a copy of either the Top 10 Trends or the IoT Basic presentation, please let us know at the email below and we’ll get you a copy.