More Than A Feeling

This is not a Sunday Brief, but is a Sunday post.  I was talking to a friend and analyst colleague about the fact that I felt different about the recovery now that I lived in Texas.  I described it in the same manner as I had from 1989-1992 living in Charlotte and Raleigh.  Yes, there is a recession, but it felt like someone else’s recession.  That’s how I feel in Texas.

So I sat down over the weekend to see if there was any justification for this feeling.  Here’s the data (source is the Bureau of Labor Statistics and the Department of Commerce.  Both sets of information, including a state-by-state analysis of job growth is found here). 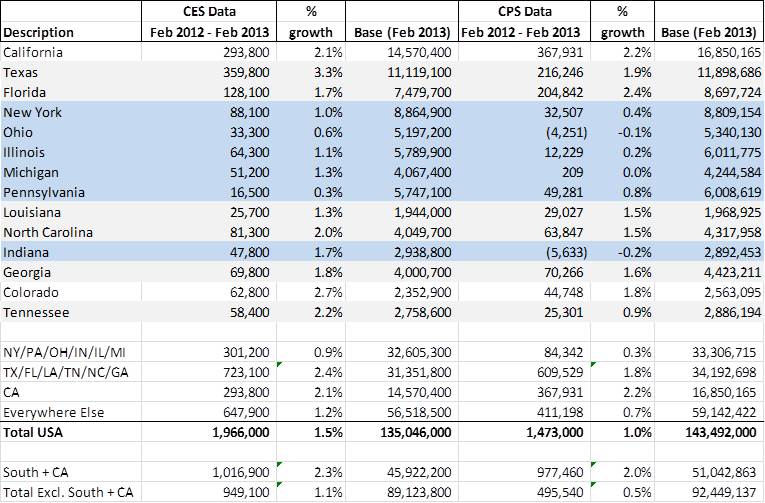 There is a lot of data in this chart, but one thing is clear:  If you live in Texas, Florida, Louisiana, North Carolina, Georgia, or Tennessee you have a different economic perspective than if you live anywhere north of the Mason-Dixon Line.

In fact, Texas alone has grown more jobs in the past 12 months (regardless of the survey) than New York + Pennsylvania + Ohio + Indiana + Illinois + Michigan.  They have done this on an employment base that approximately one third as large as the six states mentioned.  In fact, if one were to include New Jersey, Connecticut, Massachusetts, Vermont, New Hampshire, Delaware, Maine and Rhode Island – the resulting 14 state job growth total would only be slightly larger than that produced by Texas.

The growth picture could not be more different.  Using CES data, the South is creating 2.4 jobs for every job created in the North.  This ratio swells to 7.2 using the CPS data (CPS data us used to determine the unemployment rate; CES data is used to determine the non-farm payroll jobs added or lost, a.k.a. the “headline jobs number”).

In fact, adding in California to the South Six, we see that seven states (34% of the employee population of the US) are generating more than half (52% in the CES survey; 66% in the CPS survey) of all job growth.

To quote the rock group Boston, this is truly “More than a Feeling.”  It’s an emigration from North to South (and West).  In next week’s Sunday Brief, we will look at the effects of this on increased broadband investment.  Comments welcome.