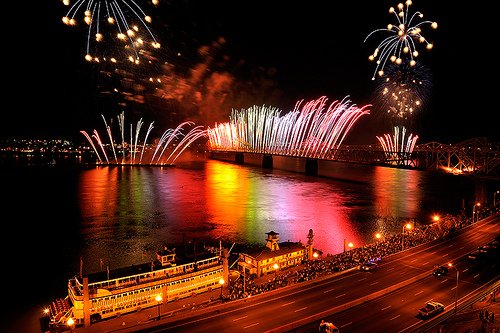 April greetings from Louisville (last night’s Thunder Over Louisville pictured), Dallas, and, by the time most of you read this, Paris.  There has been no verdict yet from the Appeals Court on the Open Internet Order (kind of surprising), so this week’s column will focus on Verizon’s earnings.  However, to get started, we’ll talk about the latest foray from Comcast in the set top box kerfuffle.

This week, Comcast announced an alternative to the FCC’s set top box mandate: the development of the Xfinity TV Partner Program (and App).  This enables Comcast subscribers to access their programming from Roku boxes, Samsung Smart TVs, and other devices that enable access (Comcast even committed to customizing their app for devices that do not support HTML5).

In the aforementioned blog post, Comcast has an interesting reference to its search feature:

As part of the Xfinity TV Partner Program, Comcast is prepared to provide consumers with a capability to search through Comcast’s video assets from a device’s user interface with playback of a selected asset via the Xfinity TV Partner app.  However, in order to provide a cohesive customer experience, such integrated search needs to include more than just this app; it must also include similar data from other video apps as well.

Comcast appears from this paragraph to not only be providing an alternative to the $230/ yr annual expense many pay for set top boxes, but also appears very open to allowing other video content to be shown alongside their app.

In a related announcement, Comcast and Roku (see nearby picture) have joined forces to bring the Xfinity TV app to the Roku player and Roku TV.  As we discussed in our first column on the topic, Roku has a meaningful market share in the streaming device market alongside Amazon, Apple, and Google (see nearby chart).  Enabling each of their devices with Comcast’s app will reduce the number of Xfinity set-top box rentals that are needed.  This also might allow expansion of existing video services to rooms where set-top boxes do not exist (Time Warner Cable used this tactic when launching their Roku partnership in 2013 and has a very unique trial going on with Roku in the NYC area described here).

Comcast enabling Xfinity without a cable box; Time Warner trialing plans that include free Roku equipment instead of a traditional cable box; Suddenlink actively offering TiVo in lieu of their cable boxes.  All of these innovations should make the FCC happy, right?  Their regulatory initiative forced Comcast’s hand and now consumers will have a choice between a cable box and more innovative solutions.  Here was the FCC’c comment on the Comcast announcement to electronics publisher CNET:

While we do not know all of the details of this announcement, it appears to offer only a proprietary, Comcast-controlled user interface and seems to allow only Comcast content on different devices, rather than allowing those devices to integrate or search across Comcast content as well as other content consumers subscribe to.

This seems to indicate a “goal post move” by the FCC.  President Obama clearly stated that the FCC was trying to solve the $230/ yr set top box rental problem in last week’s weekly radio address (device competition is the basis of section 629 of the 1996 Communications Act which gives the FCC the authority to issue the NPRM).  Now that Comcast has announced their willingness to allow Xfinity content in a manner that is not tied to owning/renting a Comcast box, but the FCC has redefined the problem to be unintegrated content and the lack of comingled choices.  Simply put, the FCC does not believe that Comcast, Time Warner Cable, Charter, or their partners Tivo or Roku solve the content organization problem, which has replaced the set top box affordability problem.

Bottom line:  Comcast’s actions are a step in the right direction.  The FCC is wrong to move the goalposts, and it’s highly unlikely that they have the authority to define how Electronic Programming Guide content is organized.  They should let the market determine how channels are presented (if you do not have a Roku or Tivo box, I would urge you to find a friend who does, look at their experience and imagine a Comcast TV channel alongside the current pay and free choices).

Verizon reported earnings (link here) that generally met expectations on Thursday.  They have already completed several items on their 2016 “To Do” list.  Here’re some takeaways on their earnings release:

Our retail prepaid is above market. We’re really not competitive in that environment for a whole host of reasons and it’s because we have to make sure that we don’t migrate our high-quality postpaid base over to a prepaid product.  If you look at the competitive nature, they are doing it with sub brands. They are not really doing it with their brands. And quite honestly, we use the Tracfone brand as our prepaid product.  Tracfone has been extremely successful for us. It’s not something that we disclose any more on reseller, but it continues to increase on the high-quality base of Tracfone, so that’s really where we use and go after the prepaid market. More to come on this during the year, but currently that’s how we operate under the prepaid model.

This alliance makes a lot of sense.  AT&T is likely to bundle Cricket with DirecTV in the (near) future, and T-Mobile is using MetroPCS to take share from Boost/ Virgin (Sprint) and Tracfone, so the opportunity to have a strong relationship with any particular carrier is limited.  While not surprising to those who follow the wholesale wireless industry, it was a pretty big statement from Verizon.  It will be interesting to see if America Movil, the parent company of Tracfone (and a direct competitor to AT&T Mexico), views the relationship in the same manner.

Since many teens do not watch content in the den or family room, this is a different but wise strategy nonetheless.  For most in this demographic, the screen in their pocket is their TV.

Here’s the rub:  While available to all wireless subscribers, Go90 isn’t zero-rated unless you are a Verizon postpaid wireless customer.  Perhaps the announcement to which Verizon was alluding in the quote above with Tracfone was a deal that zero-rates Go90 content.  That would be a game changer. 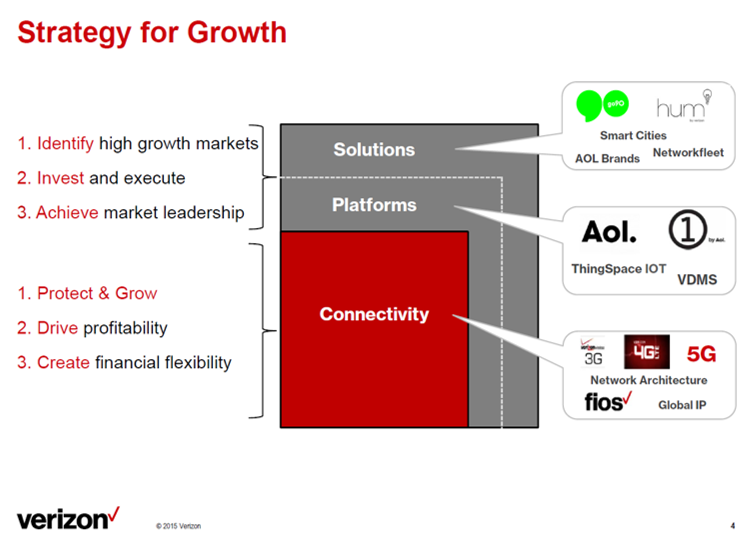 Verizon is changing.  They led off their investor presentation with the chart to the right.  While this may seem like déjà vu for those of us who remember the AOL/ Time Warner merger, it is different.  Mobile advertising and targeting did not exist, and Time Warner Cable did not have a national wireless footprint capable of distributing zero-rated content to 100 million existing customers.  Verizon has the unique opportunity to create a vertically integrated entertainment company, and, unlike AT&T, will emerge as a focused challenger.

History is not kind to transformations like the one Verizon is pursuing.  Regulations change (although Title II freedom from the anticipated Court ruling would be a plus to this strategy), organizational catharsis sets in, and cost challenges tend to take these ambitious efforts off track.  As soon as Verizon shows signs that their content strategy is impacting their wireless gross additions, we at the Sunday Brief will become believers.  There are many risks to this strategy, however, and we remain skeptical.

Thanks for your readership and continued support of this column.  Next week, we’ll compare AT&T and Verizon’s wireless and broadband results as well as examine the implications of the Open Internet Order ruling if it is released.  Until then, please invite one of your colleagues to become a regular Sunday Brief reader by having them drop a quick note to sundaybrief@gmail.com.  We’ll subscribe them as soon as we can (and they can go to www.sundaybrief.com for the full archive).  Thanks again for your readership, and Go Royals and Sporting KC!