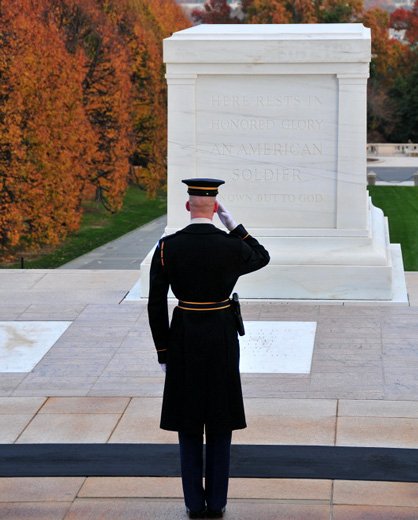 Veterans Day greetings from Seattle and Dallas.  Thank you to all who have served and are continuing to serve.

This has been a week filled with earnings news.  Before diving into Sprint’s and cable earnings, however, a quick shoutout to Scottsdale-based Telesphere as they were acquired by Vonage this week for $114 million ($91 million in cash and $23 million in Vonage stock).  This transaction represents a 2.3x return for Greenspun, Rally Capital, and Hawkeye Investments, the three principal fund sources over the past six years.  Kudos to Clark Peterson and the entire Telesphere team on a successful exit.

Sprint:  Down, But Are They Out?

Sprint reported dismal earnings on Monday.  As a result, the stock dropped 24% this week ($1.48/ share), and is down 55%, or $5.75, year to date.   In an interview with Bloomberg BusinessWeek, incoming CEO Marcelo Claure stated “I was aware of the challenges facing the business, but not to the level of detail I saw when I became the CEO.”  Interestingly, a similar statement was made by Dan Hesse during first quarter earnings in 2008 (see here for the BusinessWeek article).  Some things never change.

The difference between Sprint’s and the industry’s performances is stark, as shown in the postpaid retail net additions trend in the table below:

As if that weren’t bad enough, Sprint apparently loosened credit standards to juice tablet and family plan growth earlier this year, which drove up monthly retail postpaid churn to 2.18% on the Sprint platform and 2.22% overall.   According to the earnings call commentary, it will take six months to run the involuntary pig through the churn python.

There were additional problems  as well.  Equipment Installment Plans (EIP) were supposed to provide short term cash flow relief due to their popularity, but only amounted to 20% of gross adds in late summer.  Net promoter scores were touching on the lowest levels ever seen by Sprint.  And the wireline unit, once a supplier of cash ($120 million in 3Q 2013), became a cash consumer (EBITDA negative) in their most recent report.

Bottom line:  Things were bad, but are they better now, and can Sprint stay healthy?  Without a doubt, Sprint was healthier in September and October than they were during the summer.  But achieving net add positive status when others are growing 3-5 million net new subscribers per year only causes Sprint to fall behind less.

The Verizon and AT&T pricing actions discussed last week hurt Sprint’s ability to recover quickly.  Reorganizations and work force reductions create short-term operations disruption.  And Sprint’s potential competitive advantage, a large holding of data-friendly 2.5 GHz spectrum, is less valuable in a world where SIM card swaps (as opposed to new device purchases) are the expected way to switch carriers.  Having “special” spectrum (versus 700 MHz spectrum) is not an asset in a SIM card swap world.   There are more headwinds facing Sprint than revenue pressures caused by postpaid retail phone losses.

One of the leading telecom analysts, Craig Moffett, put Sprint’s value in perspective earlier this week when he wrote:

Today, Sprint trades at 8.6x 2015E EBITDA, despite rapidly declining revenue and subscribers.  T-Mobile trades at 6.1x ‘15E.  If Sprint were to trade at the same multiple as T-Mobile – something that we would view as overly generous given that T-Mo has already proven its strategy works while Sprint hasn’t – then Sprint would trade at $1.95/ share. 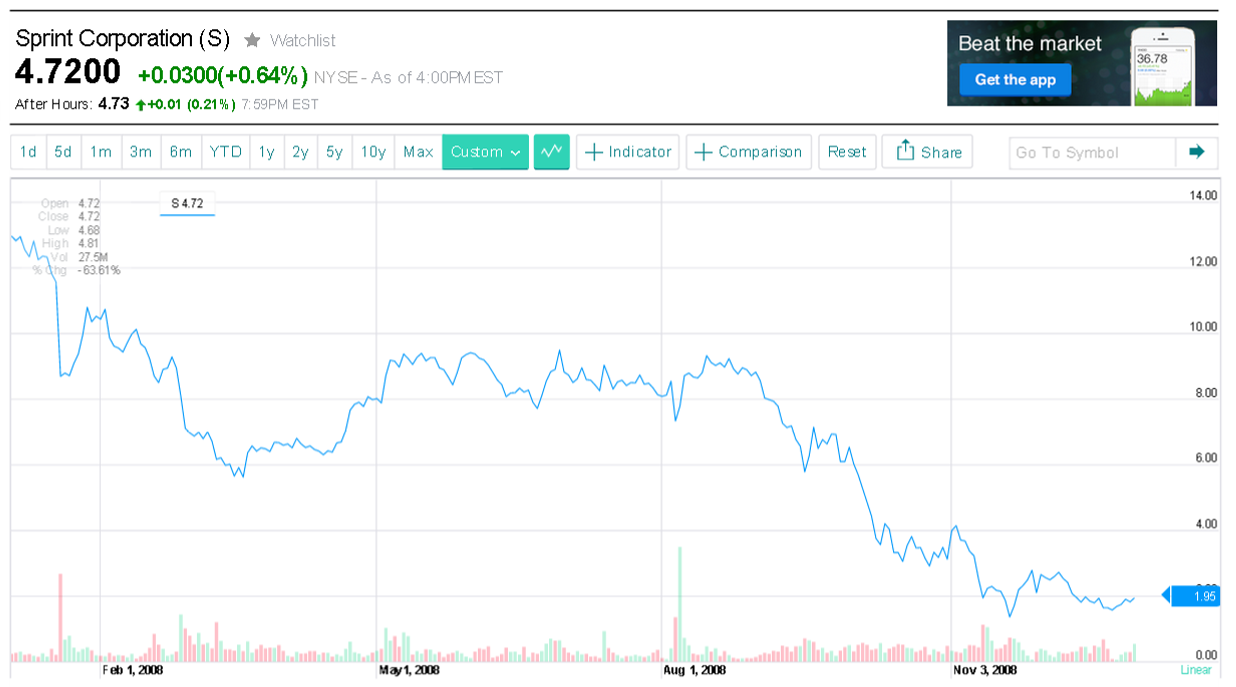 This lower share value would mirror the drop in Sprint’s stock during the first year of Dan Hesse’s tenure (Jan 1 2008 = $13.13 per share; Dec 31 2008 = $1.83 per share, an 86% drop – see nearby chart).  As mentioned earlier, Sprint’s stock is only down 55% so far this year.  While no one is predicting additional declines, the last time we saw a stock price decline this steep was in the first year of Dan Hesse’s tenure.

Sprint’s value cannot recover until their competitive advantage is established.  This includes in-home/ in- building  coverage for 2.5 GHz spectrum (not just 800 MHz spectrum), something that Sprint is attempting to get right for 3-5 unannounced cities in the next several months, and hopefully replicate across the country in 2015/2016.  It also includes stronger relationships with partners such as the cable industry and the new and improved Level3/ tw telecom.  Sprint has been unsuccessful in their single-threaded strategy, and a partner-dependent recovery plan is needed.

With all of the changes occurring in the wireless industry, we’ve been derelict in our analysts of the cable industry.  The following table outlines one of two key metrics the industy is currently tracking:

Two surprising trends emerge.  First, Charter has largely been going about their business growing their High Speed Internet (HSI) penetration by nearly 600 basis points over the last eight quarters.  Their penetration now exceeds Comcast’s and is tied with their one-time acquisition target Time Warner Cable.  Charter did this by separating their bundle offerings into a) triple play, which stands at 32.6% penetration, up slightly from 32.2% in 3Q 2013, and b) stand-alone HSI which is approximately 10% of the total residential Internet relationships.

The most interesting statistic in Charter’s earnings is the relationship between Video and HSI subscribers.  In 3Q 2012, Charter had 4.0 milion Internet customers and 4.3 million video subscribers. Those figures are now 4.7 million and 4.2 million – over 500,000 more Internet than video relationships.  Time Warner Cable has also seen a similar change, but Comcast and Cablevision still maintain parity between their video and HSI relationships (more data available upon request).

The second observation above is that everyone is continuing to grow data even as penetration rates reach (or in Cablevision’s case exceed) 40%.  Time Warner Cable is set to have their best High Speed Internet growth year since 2010, thanks in large part to increased competitiveness in Los Angeles and New York City and favorable demographic shifts to the Carolinas and Texas.  As the chart above shows, Comcast, even with their very large footprint (54.4 million homes and businesses passed as of 3Q 2014), has grown their Internet penetration by 370 basis points over the past two years, on par with Verizon’s FiOS growth.  Without revisiting the profitability of HSI (we’ve talked about this in several earnings review columns), it’s safe to say that between faster speeds (leading to higher ARPUs) and scale efficiencies, additional growth continues to be very profitable.

While High Speed Internet is the primary bright spot on the residential side, there’s a lot to cheer about with cable’s commercial services business.  The table below shows the growth of commercial services across four leading cable providers (Cox Communications is not included as it is private):

Including Cox, Brighthouse, and the remaining Top 10 cable providers (and reclassifying some of Cablevision’s small business HSI revenue as commercial services), the cable industry represents approximately $11 billion of annualized business revenue growing at 20% per year.  While economic pressures exist in the business environment, it’s the competitive pressure from cable that is halting Verizon, AT&T and CenturyLink’s business growth.

Cable’s remaining constraint is their inability to deliver a single (global?) network management platform to medium and large enterprise customers.  This service suite would include associated cloud services (infrastructure as a service, desktop as a service, etc.).  As a result, they need to rely on their relationships with large systems integrator partners to drive additional penetration.   Following the closing of the Comcast/ TWC merger, it is expected that the next cable move will be to jointly invest in a network monitoring and management provider.  This, combined with an HP (EDS), Amazon, and/or an IBM partnership, would put cable broadband into a new league and open up a large and profitable addressable market.

While the headlines will be on regulatory approval and the increasing threat of Over the Top (OTT) services, the most important metrics to watch are High Speed Internet and Commercial Services growth.  This is where cable is either extending their lead or taking market share.

Next week, we’ll publish our semi-annual comparison of wireless devices (formerly known as “It’s An Android World”).  Until then, if you have friends who would like to be added to The Sunday Brief, please have them drop a quick note to sundaybrief@gmail.com and we’ll subscribe them as soon as we can (and they can go to www.sundaybrief.com for the full archive).