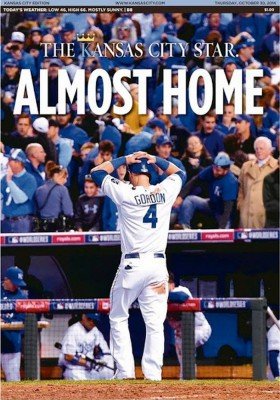 Greetings from Kansas City and Dallas.  This was a week of stunning victory and disappointing defeat.  For those of you who read this column but do not follow baseball, the World Series went to the seventh game for the first time since 2011.  Despite media reports that this would be the least watched World Series, it wasn’t (Game 7 drew 23.5 million viewers and was Fox’s highest ratings outside of Super Bowl weekend).  And, even though they won, the San Francisco fan base managed to turn it into an occasion to loot and pillage (more stunning footage on Giants’ fan reaction here).   It was a run that few Royals fans will ever forget, and a testimony to the admonition to “never … ever … ever give up.”  Kudos to the Giants on their third World Series victory in five years.  Hopefully we will see you next year.

The Royals remind me a lot of T-Mobile.  For years, pundits tracked the decline of T-Mobile as they slipped behind the market (the Royals lost 90 or more games for 9 out of 11 seasons from 2002-2012).  But then, the AT&T merger failed to transpire, and T-Mobile received cash, spectrum, and a roaming agrement as a result.  The Challenger Strategy was born.

While many (including myself) thought the Challenger Strategy was an attempt to market network expansion only, it ended up being more.  Here were the original planks of the strategy (see original announcement here): 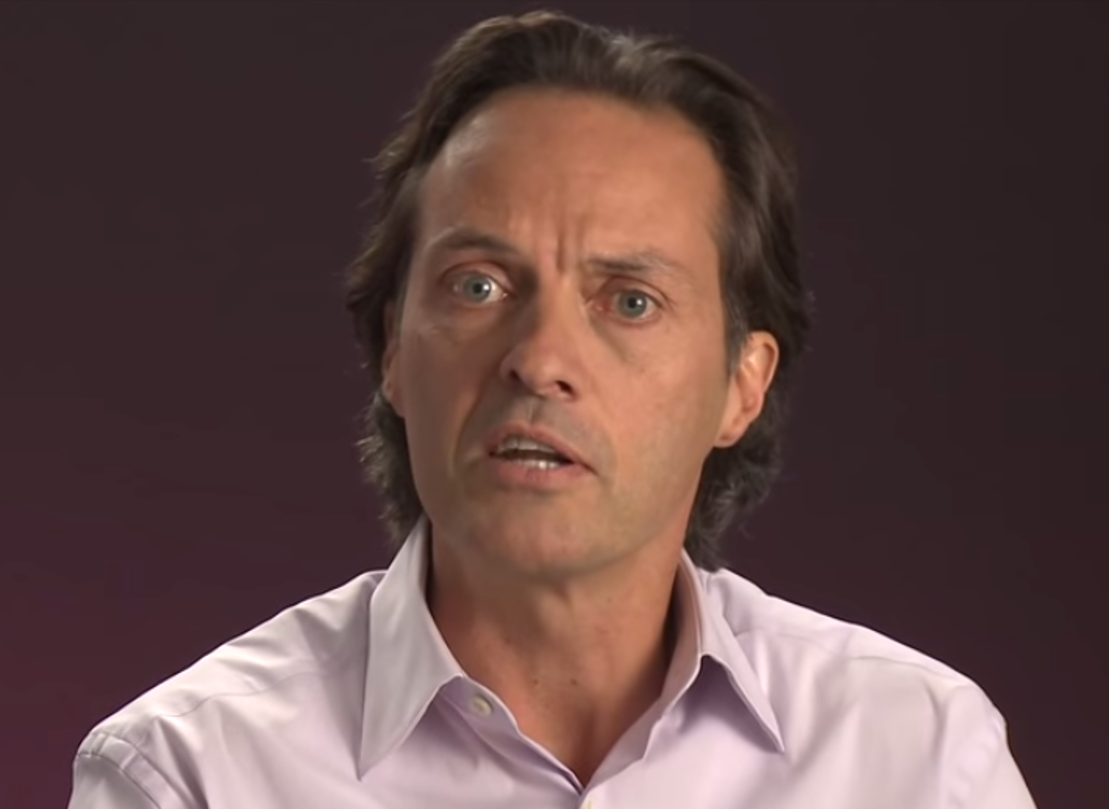 That was February 2012.  There were 37,000 cell sites to upgrade and progress to track.  This looked like a traditional upgrade network/ grow data ARPU/ find-a-way-to-survive-at-the-low-end of wireless model.  T-Mobile reported third quarter earnings on November 8, 2012 to little fanfare.  Newly announced CEO John Legere (pictured nearby) promised that the proposed Metro PCS merger would be a transformative event, and that T-Mobile would be the market leader in Bring Your Own Device (BYOD).  T-Mobile had a new manager (who publicy looked a lot like previous managers – see here) with farm team promise.

Like the Royals, the 2012-2013 season was a glimpe of what could be.  T-Mobile needed to build momentum, but also needed to best in something.  Their competitive advantage needed to translate into more wins, and to catapult them into the playoffs.

In 2014, T-Mobile could have focused on being best in a metric (postpaid net adds) through a well-defined tablet strategy (it’s a part of their plan, but not the main source of postpaid net adds).  They could have focused on dominating a particular segment like prepaid (they overtook Sprint in this category in the second quarter).  While T-Mobile is very good at serving this segment, it’s not as lucrative as postpaid, and meeting Apple’s phone commitments would require a significant postpaid acquisition effort.

T-Mobile decided to focus on the fan (customer) experience.  Deliver what they want (lower ticket prices, better/ unlimited food, a refurbished ballpark) and they will return with their friends.  More fans = more fun = more wins = more fans.  It was a cycle that was worth a shot. 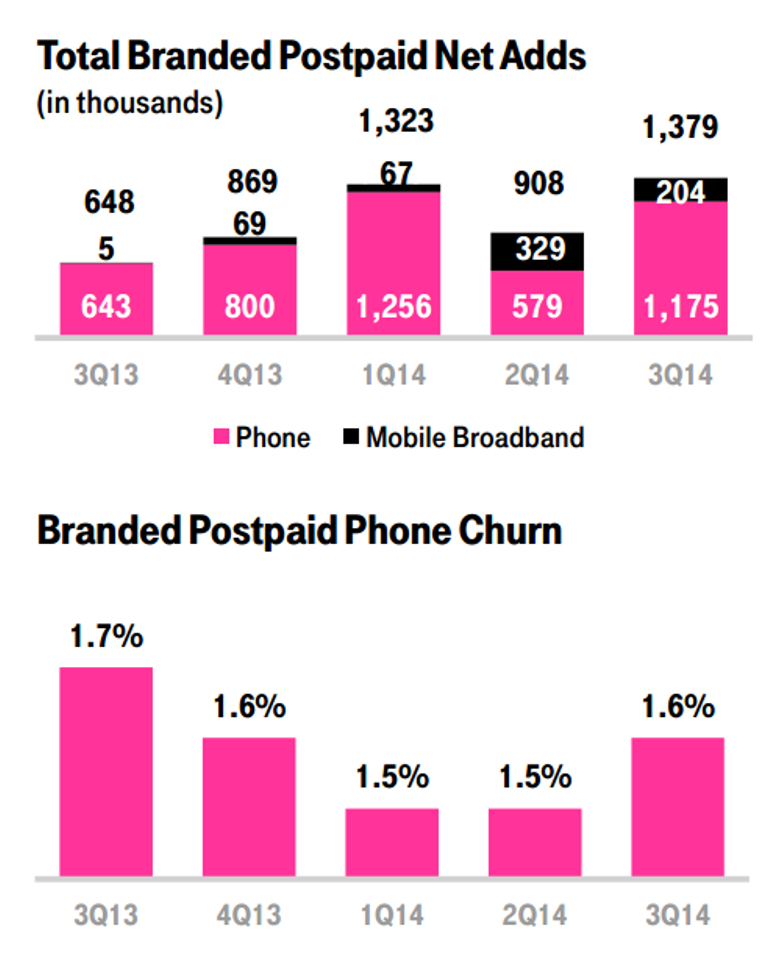 We are in the late innings of 2014.  In baseball, we would call for the closer to notch the save and collect the win for the team.  (For those of you who have not followed the Royals this season, they reinvented the middle relief process with the “gradual” close – Herrera in the 7th, Davis in the 8th, and Holland in the 9th to great success.  It even prompted them to be featured in The Economist).

T-Mobile is relying on a backlog of iPhone demand, increased network capacity, and aggressive trade-in promotions to win the year.  Unlike the Royals in Game 7, they have the lead going into the seventh inning, but their well-funded competitors have lots of hitting power.

The swings at T-Mobile began to be felt in October.  At the beginning of the month, division rival AT&T began to increase their higher end data plans, introducing 30 Gigabytes (GB) of shared data for $130 (unlimited voice and text charges extra).  Sprint doubled the data offered in their plans to offer 60 GB of data for $130.  For a family of four, this would involve consuming 500 MB of data per family member per calendar day.  That’s a lot of video consumption, and much higher than averages of 1.5-3.0 GB per month for each of the Big 4 wireless carriers.  (Note: a similar storyline is playing out in the commercial services wireless space between Sprint and AT&T/ Verizon.  More on this in a future Sunday Brief).

Not many phones will share 1 GB of data, however.  This is why AT&T increased it’s low end family plan speeds from 2 to 3 GB ($40) and from 4 to 6 GB ($70).  With unlimited voice and text, two people sharing a data pool would be charged $90 for 3 GB of shared data and $120 for 6 GB.  Given their focus on the 10GB family plan users, this change was as inevitable as having the designated hitter swing on a 3-0 count.  However, to those who have not been closely following the game, this action (and Verizon’s price reductions on higher pooled plans) seemed to indicate a price war.

Embedded in this $46-48 is some amount of subsidy (the vast majority of new AT&T gross adds in 2012 and 2013 were on subsidized and not monthly device payment plans).  Analysts have spent a lot of time trying to determine the exact amount, but it is likely $9 or so (averaging in the cost of the latest iPhone/ Galaxy with accounts who are no longer in plan and therefore are not under subsidy).  This leaves $37-39/ mo. to cover service costs.

In 2012 and 2013, average smartphone data consumption for AT&T and Verizon was less than 1 GB per user (lower in 2012 and growing in 2013 with the advent of the Galaxy 4 and iPhone 5/5c/5s).  As these figures have grown, so has the nature of their networks (LTE is “3 to 4 times more efficient” according to Verizon’s latest conference call transcript).   Supporting 6 GB of data for $70/ mo. equates to $15/ GB if the plan only uses 78% of their alloted data ($15/ GB happens to be the overage charge for the 6 GB plan).  And to get to 3 GB of data for two users, a customer needs to be either a) streaming music, or b) watching video on a somewhat consistent basis.  Even normal (teenage) Facebook or Instagram usage will not yield 3 GB of data.

The bottom line is that Sprint and AT&T are stepping up to the plate to battle T-Mobile for their sweet spot customers as 2014 comes to a close.  At least AT&T can make money at these levels given their scale and LTE network density (we will discuss Sprint next week after they announce earnings).

T-Mobile has good relief, but is it good enough for AT&T’s giant bats?  Will T-Mobile join Alex Gordon at 3rd base?  They need a hit, and iPhone 6 backlog is not going to do the trick.  Neither is the soft SIM card in the iPad (John Legere’s explanation of this during his Re/Code interview this week is superb).  Neither is free streaming music.  All they need is a single (or a wild pitch).  What will it be?

Next week, we’ll continue our discussion of third quarter earnings with a focus on wireline/ cable and Sprint.  Until then, if you have friends who would like to be added to The Sunday Brief, please have them drop a quick note to sundaybrief@gmail.com and we’ll subscribe them as soon as we can (and they can go to www.sundaybrief.com for the full archive).