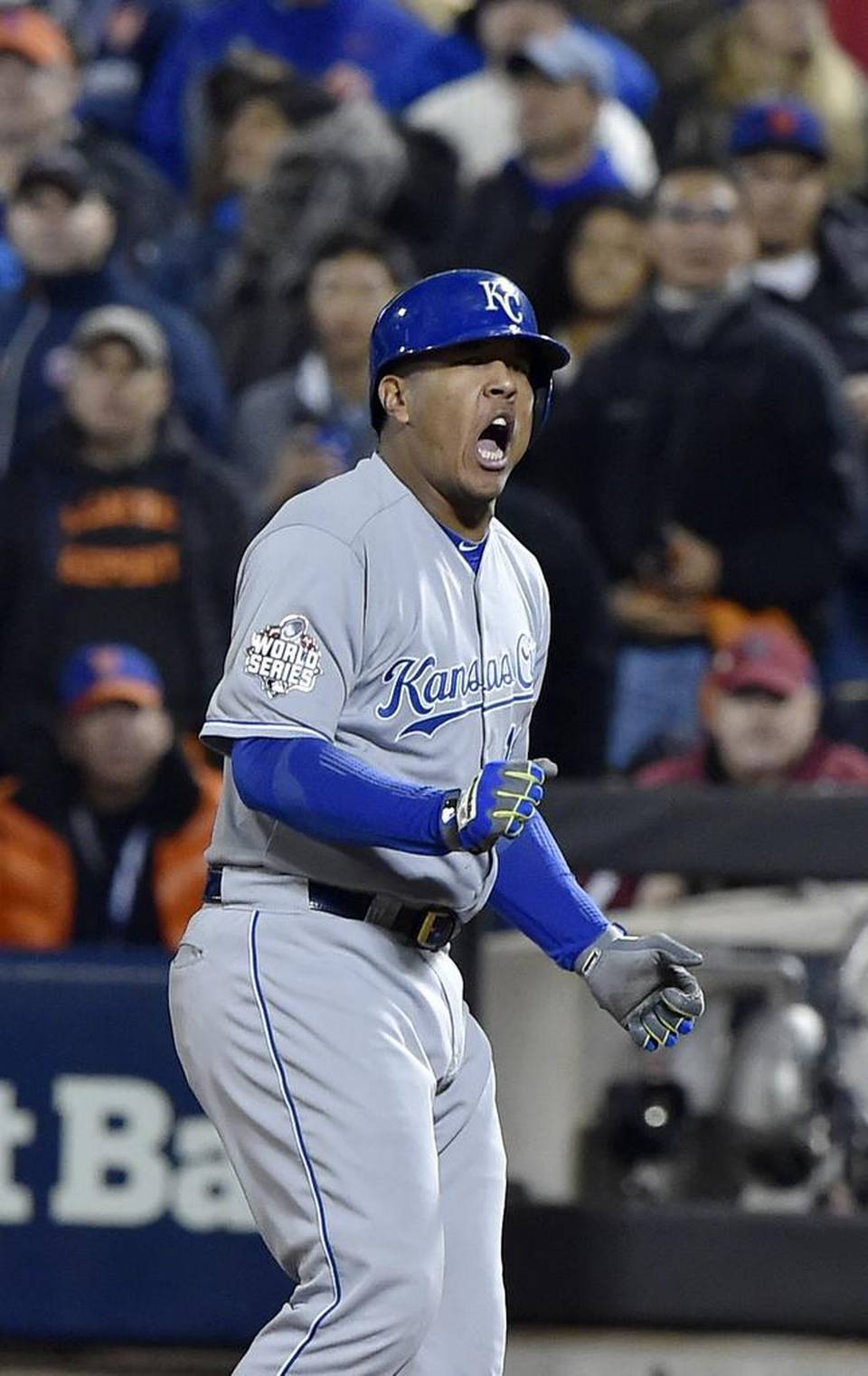 Royal November greetings (a jubilant Salvador Perez pictured after his hit in the 8th inning of World Series Game 4; Photo courtesy of The Kansas City Star) from Kansas City, Charlotte, and Dallas.  One more win…  This week we’ll look at earnings from T-Mobile and several cable companies.  We’ll also talk about the Google’s potential combination of Chrome and Android operating systems.

The Wall Street Journal reported this week that Google will combine their Chrome and Android development teams with the goal of releasing a single system in 2017.  This change is not trivial, and indicates that development teams have bridged many of the gaps that have traditionally kept laptop/ desktop and tablet/ smartphone operating systems separate.

Many questions arise from this news.  First, it’s no secret that the adoption rate of Android releases has been much slower than their Apple counterparts (see nearby chart – note that KitKat, which was released in September 2013, continues to be the most frequently installed version).  Can Google use the consolidation with Chrome to tighten up concentration?  This, of course, assumes that Google will be able to continue their annual pace of major Android releases. 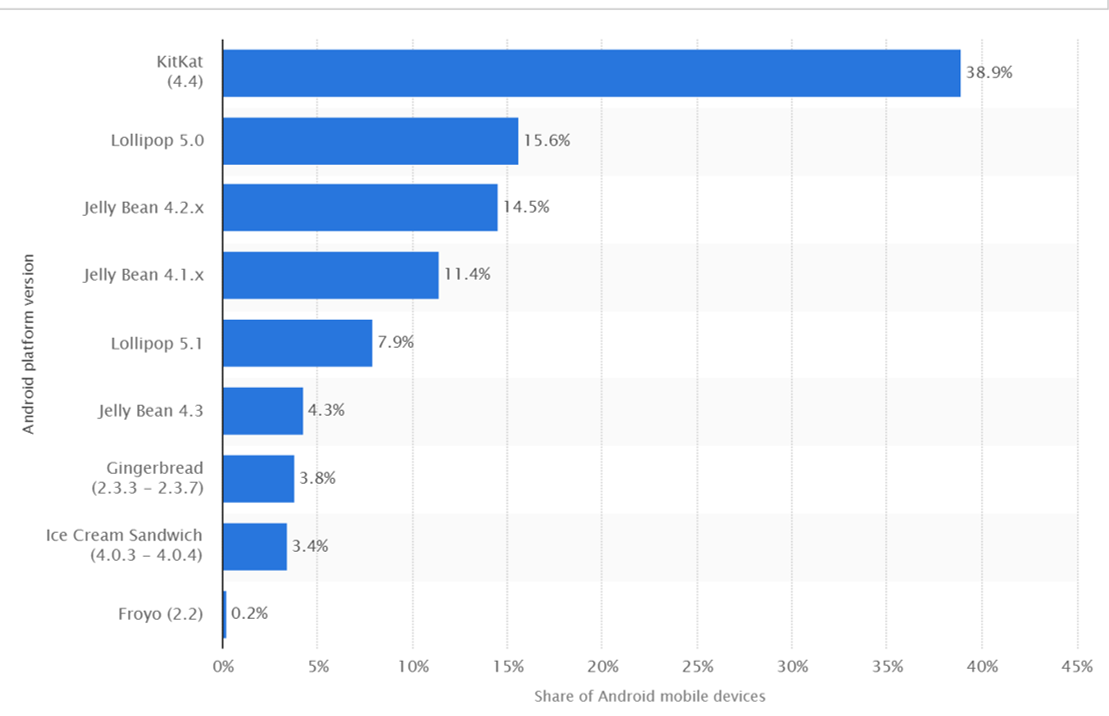 Questions also arise about the future of Chrome from this announcement.  Google was quick to state their support for Chrome on Friday after the WSJ report came out, and many tech publications actually stated that the end state might be the continuation of Chrome and Android plus the formation of the hybrid operating system (the “something for everybody” scenario that Google loves to deploy).

There is no doubt that the characteristics of operating systems (touch vs. type, screen rotation, zoom through pinching, etc.) are trending mobile.  But there are a lot of reasons why iOS and Mac OS will likely remain separate for the foreseeable future on Apple devices.  A good indicator of adoption will be when Apple launches their 12.9 inch iPad Pro in mid-November.  If developers begin to balk at the requirements of the extra large screen, look for Apple to make changes that begin their own merging process.

T-Mobile announced earnings on Tuesday morning (full details here), and held a lengthy earnings call that covered all aspects of their operation.  The bottom line is that T-Mobile added 895,000 net new postpaid retail phone customers (185,000 of these came from T-Mobile’s prepaid base) on top of 595,000 net new additions of retail prepaid subscribers (also inclusive of migrations to postpaid).  Postpaid churn came in at 1.46% which was up sequentially but down from 1.64% in 3Q 2014.

Most importantly, T-Mobile grew service revenues sequentially at 2.6% and annually at 10.9%, a reflection of the state of their transition from subsidy-based to EIP/ lease plans.   They also did this while decreasing Cost of Service sequentially (down $19 million) and annually (down $110 million).

While these results were strong, they missed many analyst expectations that were likely elevated by the preliminary net add figures shared by CEO John Legere at a mid-September investor conference as well as perceived momentum heading into the launch of the Apple iPhone 6S.  T-Mobile COO Mike Sievert stated on the earnings call that this was the “best quarter ever” for iPhone sales (measured as a percentage of total sales), so it’s likely that the issue was not selling, but rather fulfilling backlogged orders (see our post-iPhone launch coverage for the trends; provided that customers did not cancel their orders, T-Mobile has a robust launch backlog that it will continue to fulfill into November).

T-Mobile showed excellent discipline and focus throughout the summer, building their LTE network to 301 million POPs, and adding New York City, Portland, and Seattle to the 700 MHz coverage footprint.  The company also announced that they came to an agreement for 700 MHz deployment in several new markets covering an additional 20 million POPs, including Phoenix, Tucson, San Diego, Las Vegas, Norfolk, Baton Rouge, New Orleans, Fayetteville, Macon, and others.  They had a strong month in tablets (242K net additions), but did not try to juice the number with end of quarter promotions.  Spending scarce marketing dollars on acquiring the most profitable [phone] customers is a good thing to do, and building a farm team of potential postpaid retail subscribers through the prepaid channel is good business.

Even bigger than the addition of 20 million 700 MHz POPs, however, is the sheer growth in the footprint.  T-Mobile’s marketing messages reflect this:  Over 1 million square miles of LTE coverage have been (or will be) added in 2015.  John Legere recently commented that 260,000 new homes will receive T-Mobile network coverage each week in the fourth quarter.  As we have commented on previously, this creates a large “new store” (as opposed to “same store”) sales opportunity for T-Mobile at the end of 2015 and throughout 2016. 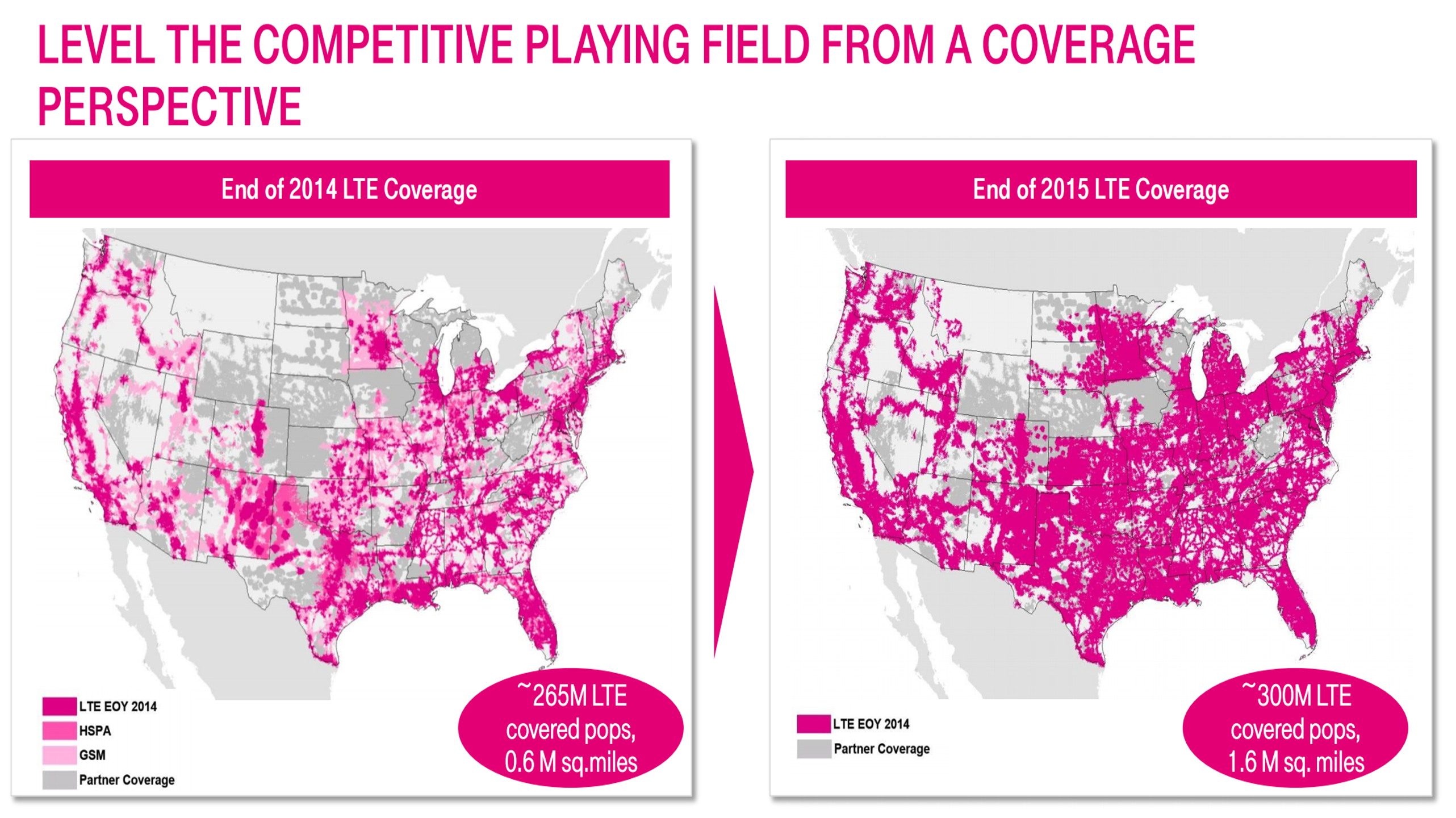 We’ll take more time with this in a future Sunday Brief, but it is clear from comments made on the call by T-Mobile CFO Braxton Carter as well as a disclosure about sequential sales and marketing expense increases that T-Mobile is investing heavily in these new territories.  As we have discussed previously, not only will they have to convince previous T-Mobile customers that they can deliver a parity (or superior) network experience, but that they can sustain that experience as they continue their rapid growth.  To a lesser extent, T-Mobile will have to convince Wal-Mart as a channel of the same items above as they revamp their Family Mobile plans (see nearby screen capture of their current compelling rates).

Bottom line:  Another strong quarter from T-Mobile.  With Metro PCS integration nearly complete (the last of the transition expenses should be reported in the fourth quarter), and 93% of subscribers already on Simple Choice plans, the new focus for T-Mobile is on territory expansion.  There’s no one better for secondary and tertiary market retailing than Wal-Mart, particularly during the Holiday season.  It’s a double tailwind that none of their competitors have as we exit 2015.

A trio of the nation’s largest cable companies reported earnings this week (Comcast here, Time Warner Cable here, and Charter here).  Just a few quarters ago, the professional hand-wringers were lamenting the rise of the “Cord Never” segment and projecting their immediate impact on the long-term profitability and value creation capabilities of the industry (even as late as October, Forrester was out with a survey suggesting that in 10 years, half of the under 32 demographic will never have subscribed to a cable video service.  It reminds me of a recent State Farm Insurance commercial).

The cable industry faced the dual forces of higher satisfaction from satellite (see JD Power study results here), as well as the long-term secular trend away from residential phone service.  This left one option in the opinion of many analysts:  raise broadband prices while trying to get consolidation approval (and after that, to wring out any cost reduction possible).

It seems like someone forgot to tell the cable industry that broadband “Price ups” (a Verizon term) was the only lever left.  Here’s what the net subscriber additions look like for the companies that have reported through October 30:

Charter and Time Warner Cable, on a pro forma basis, are actually growing video subscribers.  With respect to High Speed Internet, the Charter+TWC entity has grown more residential HSI subscribers (363K) than Verizon has over the past three years (and adding in Bright House Networks only makes the total better).

This trend cannot continue forever.  After all, DirecTV and AT&T were in the process of merging and they are coming out with fervor in the fourth quarter.  Verizon is in the process of divesting some of their more profitable FiOS properties to Frontier (California, Texas, and Florida).  And voice – everyone knows that the cable companies are just throwing in voice for free to increase their conversion rate – no one is really using the voice product.  These gains are merely temporary and are driven by merger-related activities.  So goes the conventional wisdom.

What’s interesting about conventional wisdom is that few in the cable industry listen to it.  Those price hikes – Charter’s data ARPU was up 0.50% quarter-over-quarter (7.3% y-o-y), and Time Warner Cable was up 0.66% (3.7% y-o-y) – hardly the activities of revenue desperate entities but instead the product of increased triple play penetration and customer-requested speed upgrades.  Video is in a secular decline, but it’s being managed through different (skinny) bundles as well as OTT (see this article on Charter’s OTT efforts).

Comcast is taking a more expansive task with the X1 platform (which will get its own Sunday Brief this December) rather than withdrawing from the market.  Depending on the outcome of the Cox Communications trials, it might become the de facto standard for cable video transmission.  Purchasing volumes would help the X1 platform enormously.  Satellite providers are taking notice.

Then there is wireless, an opportunity no one wants to talk about publicly but there’s lots of private chatter.  Could a cable consortium emerge as a “dark horse bidder” (John Legere’s term)?  Could they actually implement a data-first network that would extend Sprint and T-Mobile signals farther into buildings/ neighborhoods (assuming they were cable broadband customers) while opening up the door to significant Wi-Fi or 600 MHz local coverage?  It would require Radio Access engineering and network operations competence that cable does not have today.

Is there a cooperative model that could work between Sprint, T-Mobile, and local cable providers?  Where there’s a will, there’s a way, and it’s been a decade or more since the last major product platform (VoIP) was launched.  Don’t count cable out of wireless – there are too many reasons for the industry to enter – now.

Next week, we’ll continue to sort through earnings news as CenturyLink (Nov. 4) and Sprint (Nov. 3) report earnings.  Until then, please invite one of your colleagues to become a regular Sunday Brief reader by having them drop a quick note to sundaybrief@gmail.com. We’ll subscribe them as soon as we can (and they can go to www.sundaybrief.com for the full archive).  Thanks again for your readership, and Let’s Go Royals!