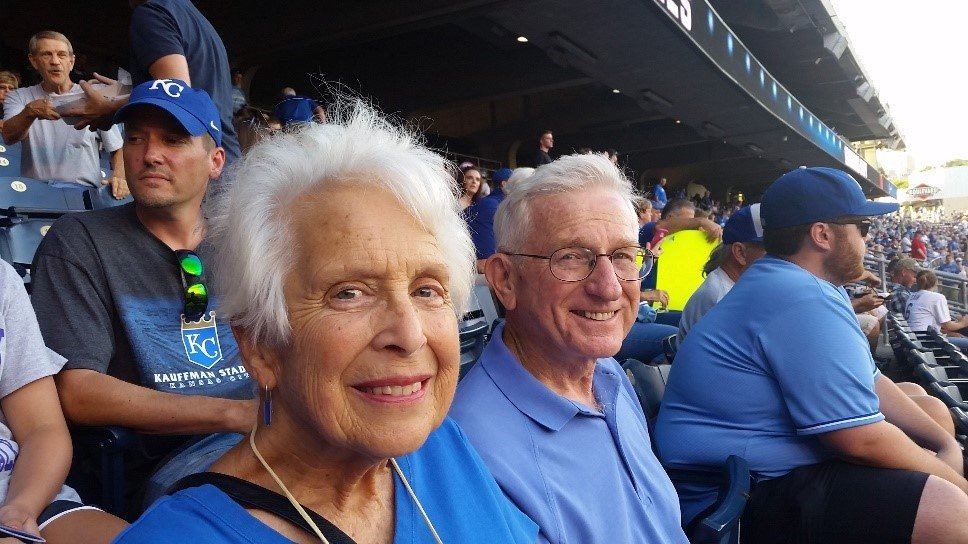 Greetings from Kansas City, home to some of the greatest sports fans (including my folks who are pictured at Thursday’s Royals/ Angels game) and Dallas, currently the home of some of the warmest sports fans in America.  This week’s column will be devoted to a review of Sprint’s performance over the past year and includes some suggestions for the next.  Unfortunately, the Samsung product announcements (which will have a larger impact than many expect), AT&T analyst day observations, and a host of “you might have missed” stories that many of you forward each week will have to wait.  But please keep forwarding your thoughts and observations (including to my Twitter account @pattersonadvice).

Last August, Sprint was in turmoil.  The T-Mobile merger continued to elicit a “No means no”  response by the FCC.  Framily results, while initially strong, were being impacted by a resurgent T-Mobile. 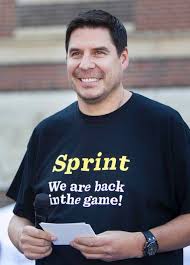 Something had to change, and on August 6,  and on August 6, Dan Hesse stepped down as Sprint’s CEO and Marcelo Claure, a Board member, took over.  A billionaire telecom executive with a passion for soccer and a love of celebrity was moving to Kansas City (and forcing his entire executive team to do the same)!

Could this be the desired turnaround?  Could Marcelo restore the lustre last seen when Candice Bergen was the “Dime Lady?” and Free Fridays were the rage for business customers? There was hope for a stronger Sprint.

In that light, we penned one of the most read Sunday Brief articles called “Dear Marcelo” where we offered some unsolicited advice:

Overall, Sprint has done an excellent job in reducing subscriber loss and reducing churn, thanks to an eye-popping 20 GB family plan that depended on high breakage (average data usage with industry growth rates) to be profitable.  They have also leveraged Brightstar and other Softbank relationships to improve their overall costs.  The 800 MHz and 2.5 GHz network upgrades have helped out a lot in major cities (including Dallas), and overall LTE coverage is broader than many expected.

Sprint also gets the innovation and leadership award for their All-In phone leasing plans (although adjusted EBITDA now has to be readjusted if one is performing competitive comparisons).  They have made it easy for prime credit customers to get a new Apple iPhone 6/ 6 Plus or the new Samsung Galaxy Note 5 for an attractive monthly payment.  While the “Cut Your Bill in Half”, “Direct 2 You” and Radio Shack store expansions are still unfolding (Radio Shack being a real head scratcher), the core family and All-In offers continue to resonate a year later.  That’s the sign of a powerful first 90 days as CEO.

Given all of these changes, Sprint’s stock should be soaring (as most stocks do when analysts realize that the worst financial results are in the past and earnings growth is just around the corner).  Why then, has the stock price fallen 29% (and as much as 47%) since last August?   Why has T-Mobile’s stock risen by 38% since the day Claure took over as CEO (see Yahoo! Finance chart nearby) while Sprint has fallen 29%?  Why is T-Mobile’s equity value now twice that of Sprint? 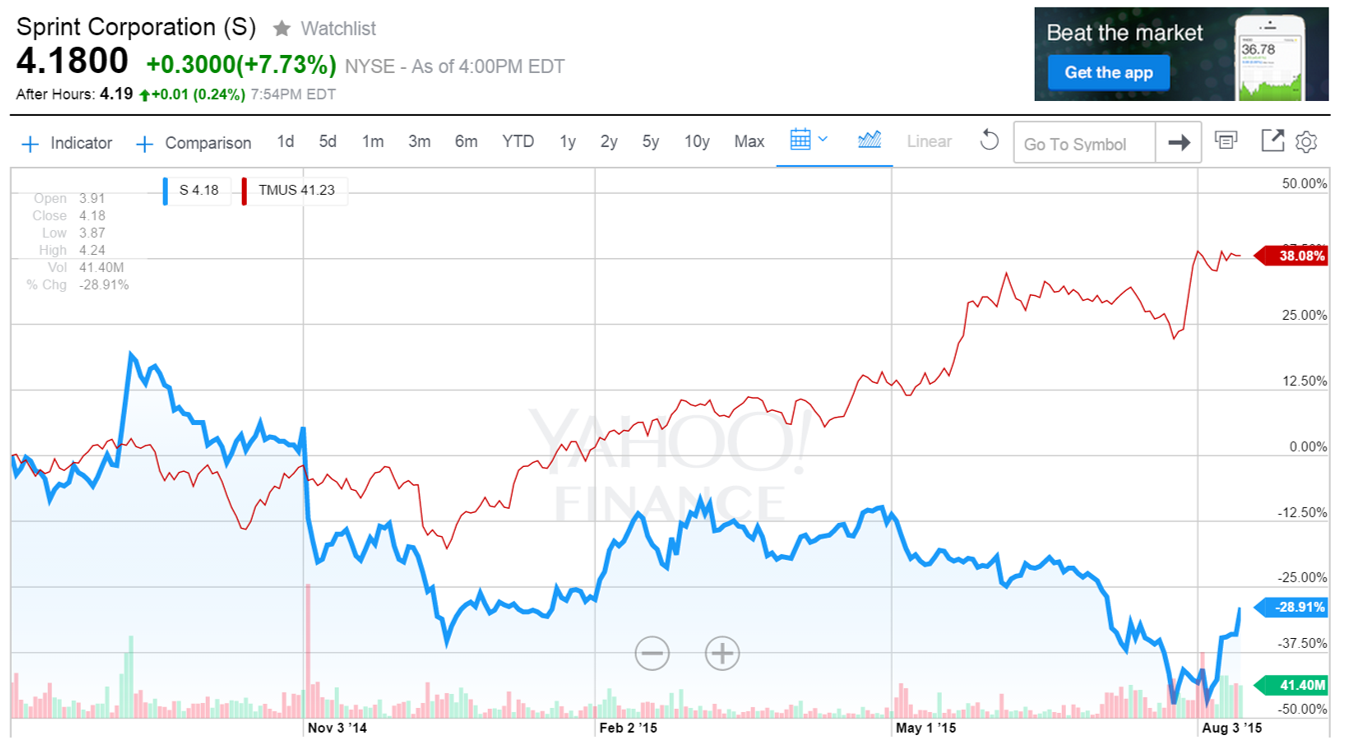 The simple answer can be summarized in one word:  horizon.  Not Verizon, although T-Mobile’s #neversettle campaign was directly aimed at their larger counterpart, but horizon.

Sprint is doing a lot of things – cutting costs, deploying networks, improving the customer experience – but to what end?  Is merely a positive postpaid phone net additions number an acceptable “finish line” when T-Mobile has just posted 1 million branded postpaid retail net additions for the fourth consecutive quarter (driven by a 1.3% monthly churn rate)?  To Sprint’s credit, getting to positive is an achievement, but T-Mobile is getting stronger – a lot stronger.  And Verizon and AT&T are beginning to use their size and industry clout to create meaningful differentiation in content delivery.

Sprint’s current horizon is “above water.”  No doubt there is a 300-year plan tucked away in a secure safe in Japan, and there are myriads of 3-year plans being modified to reflect $15 billion in spending on mini-macro architectures with large employee reductions, but there is no rank and file elevator pitch for how Sprint will lead the wireless industry.  Here’s the best  elevator pitch the Sunday Brief has heard from a Sprint employee/ officer recently:

Some of you are probably reading this thinking that most employees could not begin to communicate this with as much clarity as is outlined above.  To Marcelo’s credit, however, I have heard renditions of this pitch from several current employees over the past three months.  To many of them, it’s Network Vision (Sprint’s LTE deployment and 3G upgrade) done right plus a couple of sizeable layoffs (cue the nervous laughter) and a side shot of empowerment.  The current employee base are skeptical yet believers – not blind to “I’ve got a secret” promises over the past 15 years (Sprint ION being the costliest technology promise of the past two decades), but willing to take the next step.

The harsh reality is that the rank and file Sprint employee does not understand the concept of victory.  This is not achieving a budget goal or being retail postpaid phone net add positive or receiving an RootMetrics award, but an acknowledged defeat of the incumbents.  Without a doubt, few if any of the legacy Sprint employees have ever existed in an environment where victory was defined.  The concept of beating an opponent is completely foreign and not “Sprint nice.”

To be victorious, someone needs to surrender.  Who is going to surrender tens of millions of customers to Sprint?  In fact, what should the victory horizon look like?  Here are some thoughts:

Residential broadband customers have two choices according to www.broadbandnow.com (enter zip code 23860):  Verizon DSL (no FiOS) – 3 Mbps for $29.99/ mo. (regular rate is $35) and Comcast with 25 Mbps for $39.99/ mo. (regular rate is $67).  The same monthly circuit cost for a small business customer is $48-53 (VZ) and $100 (Comcast).  Guess who is winning?  To make matters worse, see below for Sprint’s wireless coverage in Hopewell as of August 16 – a bad mosaic for sure (and to think of the data experience cliff that customers go through moving from Spark yellow to Verizon 1xRTT purple roaming speeds – the net promoter score in Hopewell must be outrageously negative). 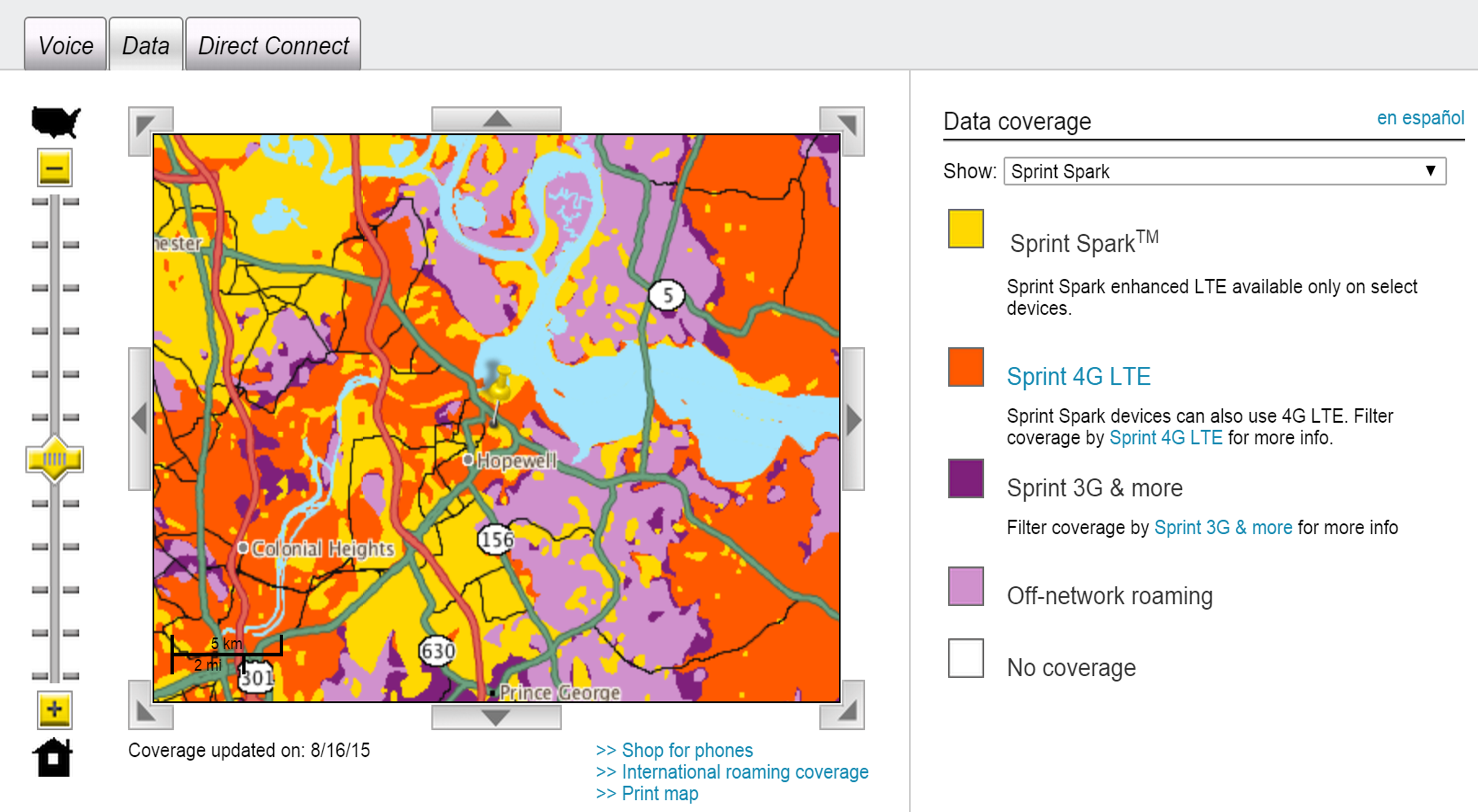 With the new BHAG described earlier, Sprint needs to stop thinking  solely about handsets and start thinking about connections (and these need not be wholesale connections exclusively).  Turn the nearby map solid yellow and offer small business customers a $70/ month “fast as possible” circuit with a minimum of 10 Mbps and a 35GB cap.  Or, better yet, pull a Google Fi on data access and charge a one time fee of $500 to connect, and annual fee of $500 and have business customers pay only for the data that they use!

As you can see, there are plenty of opportunities to add connections.  Handsets are going to continue to be important, but enterprise branch connectivity can move the needle without breaking the bank.  Many of the former Clearwire employees realize this and have specifications already written for a premiere business data backup product.

For the largest metropolitan areas, Sprint needs to control and manage its metamorphises.  For the suburbs and the byways, that’s a different story.  Why not bring the Alamosa, US Unwired, Ubiquitel, iPCS, and other affiliate bands back together to lend a hand?  This is more than network management – give them the rights to “fight local” against Verizon and AT&T.  Protect the entity from any parent bankruptcies (just as has been done with the Special Pupose Entities described in your most recent 10-Q), and reunion is possible.

This “re-affiliation” accomplishes two important objectives:  a) it spreads the financial and deployment risk of the new mini-macro architecture beyond Sprint, and b) it allows historically weaker market share areas to regrow without the fetters of Sprint’s dwindling advertising budgets.

Transformational change is hard.  Creating competitive advantage against AT&T and Verizon is even harder.  Sprint needs to define a victory horizon and engage external parties to help secure success.  Time is running out.

Next week, we’ll hit the AT&T and Samsung announcements.  Until then, please invite one of your colleagues to become a regular Sunday Brief reader by having them drop a quick note to sundaybrief@gmail.com. We’ll subscribe them as soon as we can (and they can go to www.sundaybrief.com for the full archive).  Thanks again for your readership, and enjoy the remainder of your summer!