Free AT&T Broadband- What Does it Mean to 2014 Exchange? 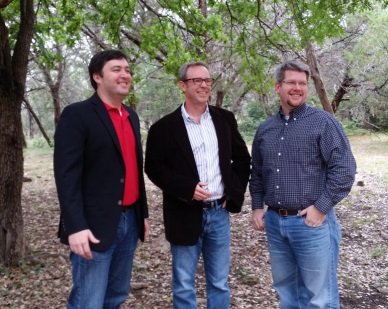 Mid-May greetings from Chicago, Boca Grande (FL ), Austin, and Dallas.  Before revisiting Thursday’s FCC meeting, a quick shout out to my friends at StepOne (the three founders are pictured here) who announced a $4 million A Round from Austin VC firms Live Oak Venture Partners and Silverton Partners.  It was a big day for the founders, their employees, and their customers.  Their perserverence and business planning reflects the three decades that they have been tackling the issue of self-service.

For those of you who are unaware of what StepOne does, they have deployed the first commercially viable (and search-free) recommendation engine for customer service.  While this will be initially deployed for communications service providers, there are plenty of expansion opportunities.  Mo

The May 15 FCC Meeting:  Theater at Its Finest.

Last week’s column served as a brief of this week’s May 15 FCC meeting, which lived up to the hyperbole and drama expectations.  While it would be impossible to cover the entirety of the meeting in the remaining space of this brief, suffice it to say that the tone of this meeting was more passion-filled than all of this year’s previous meetings – combined. re on what they do here (GigaOM article) and here (VentureBeat article).

The full contents of the first hour of the May 15 FCC meeting (courtesy of CSPAN) which covered the Open Internet are here.  There is a lot of information covered with these three topics, and, while this blog is not focused on regulations per se, the outcomes of the FCC meeting impact the values of communications services providers, software services, and device/ equipment manufacturers.

From a quick (and not in-depth) read of the Fact Sheets found in the links above, two major definitions emerge that are important to understand:

If you can watch one definition evolve over the next sixty days, focus on “commercially reasonable.”  As you contemplate the effects of this definition, think about how a FiOS or Xfinity attorney will revise the marketing message of each of these products to allow Verizon and FiOS to continue deliver a high-bandwidth product to the home, yet accommodate time of day congestion.  (Note:  this “throttling” already occurs in the wireless industry and is the underpinning of most of their unlimited services).

It is extremely difficult to derive a commercially reasonable standard  for a product with unlimited usage.  If the Commission wanted to drive the industry to metering (which they did in the case of the wireless industry), they could have done nothing better than to introduce the “commercially reasonable” concept.  More on this in a future Sunday Brief (note: I am going to recruit several of you to help me write that column).

So the FCC is going to study any merger regardless of the quantity of spectrum holdings, but all transactions that result in 33% or more of low band spectrum will receive “enhanced” scrutiny.   So much for clarification.

The comments in this fact sheet presume that there is no remedy for the high-band spectrum issue – that no in-building innovations can occur that can create an equal or better experience to the low band spectrum and be economical.  As Verizon and AT&T will demonstrate over the next two years, AWS spectrum can be a very effective in-building solution (as can the 5GHz Wi-Fi band) IF wireless companies can begin to think like wireline companies.

There’s a lot more to write on these topics, and, overall, I commend the Chairman on his leadership on these issues (and remind Commissioners Pai and Rosenworcel that their recommended “deliberate and study” approach is what delayed the adoption of Voice over IP (VoIP) as today’s protocol of choice and resulted in billions of dollars of lost value for last decade’s innovative VoIP providers).  If the FCC’s actions prod additional legislative action, then even better.  But waiting is the worst option to take at this time.  (For my thoughts on this topic in August 2010, see my RCR Wireless column “The Internet Needs a New Roof, Not a New Set of Shingles.”).

There are many aspects of wireline operations that impacted tradtional/ incumbent telecom provider first quarter earnings:  Continued voice weakness across residential and business segments, acceleration of wholesale revenue declines driven by carrier disconnects of traditional (TDM) circuits, and the rise of cloud computing/ managed network services over carrier-provided Ethernet networks were echoed by each of the traditional/ incumbent carriers.

Revenue growth, however, was driven by consumer data (and, in the case of AT&T and Verizon, by their video services).  The chart above shows the penetration gains in consumer High Speed Internet services for four large cable providers (Suddenlink, while private, reported a 1.7% annual penetration gain in Q1 2014.  AT&T, CenturyLink, Cox, Mediacom, and Brighthouse do not report penetration figures).

The key to wireline growth is faster data.  In their quarterly earnings bulletin, Verizon disclosed that over half of their FiOS High Speed Internet base is on speeds of 50Mbps (downstream) or higher.  One of the many factors behind Charter’s penetration success is their baseline advertised speed of “up to” 30 Mbps.  The promise/ expectation of faster data, delivered in a consistent manner, will continue to drive penetration gains IF those promises are kept (see here

for one example of a Charter customer who is not receiving advertised speeds.  Wonder what Chairman Wheeler would think of that?).

Speeds (and ARPUs) in consumer High Speed Internet are expanding.  On the small business side, however, a price war is beginning to brew.  In the regions where AT&T is the local U-Verse provider, they are offering one year of free Internet for small businesses (or a $35/ month credit on higher bandwidth packages) with the purchase of an accompanying AT&T Wireless bundle.  The chart on the right shows their rates for various speeds.

While AT&T does not separate small business from total broadband connections, their revenues over the past several quarters have been trending 3-5% lower.  As we have discussed in several Sunday Briefs, given AT&T’s presence in Texas, California, and the Southeast, they stand to gain first from any economic recovery.  This “free Internet for a year” offer, if implemented properly, will turn AT&T’s consistent 3% annual small business wireline revenue declines into 3-4% gains.  To some extent, this also decelerates  T-Mobile’s small business wireless gains as well (bundling has a two-fold effect).  This represents an interesting wireline development that could drive gains in both divisions of AT&T (see commercial here).

Due to the Memorial Day holiday (yes, it’s here already), there will be no Sunday Brief next week.  The following week, we will cover wireless handset lineups for the industry (a part of our “It’s an Android World” series).  If you have friends who would like to be added to The Sunday Brief, please have them drop a quick note to sundaybrief@gmail.com and we’ll subscribe them as soon as we can (and they can go to www.sundaybrief.com for the full archive).