Four Questions for the FCC Chairman

Valentine’s and Presidents Day greetings from Charlotte and Dallas.  This week, we’ll review the FCC Chairman’s recent comments on proposed regulation, look at CenturyLink’s earnings, and provide some overall comments on the state of the industry as we await T-Mobile (19 Feb) and Comcast (24 Feb) earnings.

Four Questions for the FCC Chairman

Many of you have called/ written me about the general chatter about regulatory changes proposed by FCC Chairman Tom Wheeler.  The telecom industry needs to take Tom Brady’s advice and “R-E-L-A-X.”  While it is strangely undemocratic that the Chairman would be very collaborative in the process to date yet embargo the release of the proposed Report & Order from the public, the report will be released in a matter of days and, as AT&T CEO Randall Stephenson said in his CNBC interview on Friday, the industry will ask for a stay of the order pending the completion of court action.

Chairman Wheeler made some statements last Monday at the Flatirons event which can be seen here.  They describe the three elements of a regulatory framework:  a) Establish a higher “bar” for Internet speed to reflect the changing consumption patterns of Americans; b) Provide the regulatory cover to enable public sector (in this case, municipal taxpayer) monies to be used to compete against incumbent networks, and c) Establish rules that prevent incumbents from using their monopolistic or duopolistic structures to further thwart the advancement of a faster and fairer Internet.

Rather than pick apart the Chairman’s speech (see article here providing a lot more detail on why NABU failed – it had less to do with the cable industry in the 1980s and more to do with a business model that predated email, the browser, and Wi-Fi enabled devices), let’s focus on four questions that this Report & Order should address:

There’s a lot the government can do to improve broadband availability and affordability.  Competition is the catalyst for success.  If the FCC cannot promote capitalistic solutions to solve these problems, the issue will be left up to either a) judges, or b) the Congress and the President.  More to come after the details are released.

CenturyLink’s Earnings:  Caught in the Middle

CenturyLink provided a quarterly and full year earnings report last Wednesday.  As we have stated in several previous Sunday Briefs, they provide a fairly good proxy for the state of the incumbent local exchange provider section of the telecom ecosystem.  Like their peers, CenturyLink is in the midst of a transition, although it appears that the worst declines are behind them. 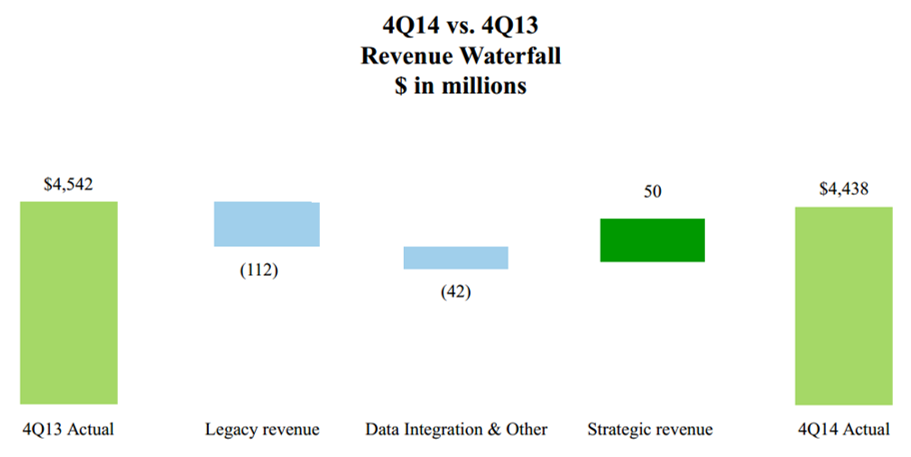 Their fourth quarter waterfall chart provides a good visual of the transitions affecting the company.   Legacy revenue, consisting mainly of voice and low speed access services continue to be under pressure, although it appears that the largest declines are behind the company.  Data Integration revenues (Customer Equipment and special construction revenues) were also down from the fourth quarter of 2013.  In total, these revenues represent just over 3% of the beginning revenue balance (revenue losses from local lines net of strategic revenues have been as high as 6% in recent years).

Of greater concern is the inability to grow new revenues.  CenturyLink spent $160 million on AppFog and Tier 3 in the last half of 2013 (net of cash on hand), and these acquisitions should have started to show meaningful revenue gains.  Fifty million of revenue growth (with no material sequential revenue growth due to collocation revenue pressures) is very slow, especially on a quarterly revenue base of over $2.3 billion (note: even a “normalized” figure shows a strategic services growth rate of 3.5%).

To increase the sales opportunity base (and to get the right salespeople in place to sell cloud and security services), CenturyLink reorganized.  While the full extent of this reorganization is not yet known, management tempered H1 2015 expectations to reflect the transition time needed to sell and provision cloud services.  Two CenturyLink veterans (Karen Puckett and Maxine Moreau) now run the company – this number had been as high as five in recent years.  Provided that the bureaucracy of a large corporation can be minimized (meaning decisions can be made more quickly and that market performance can be localized), this is a recipe for success.  There are many who doubt that this can translate into the growth expectations established by the company – any growth above 3% will be viewed as a positive sign.

Bottom line:  CenturyLink needs a win before the Comcast/ Time Warner Cable merger is completed.  The Data Gardens and Cognilytics acquisitions are good starts, but there must be a sales force to create a compelling value proposition to customers.  This starts with end-to-end service performance and pricing that reflects marketplace realities.   More earnings detail is available here and here.

While there are a lot of events swirling throughout the telecom ecosystem, here’s some undeniable trends based on recent news:

Next week, we will wrap up the Big 4 with T-Mobile’s earnings.   Until then, if you have friends who would like to be added to The Sunday Brief, please have them drop a quick note to sundaybrief@gmail.com and we’ll subscribe them as soon as we can (and they can go to www.sundaybrief.com for the full archive).