Four (or more) Earnings Questions We’d Like to Ask 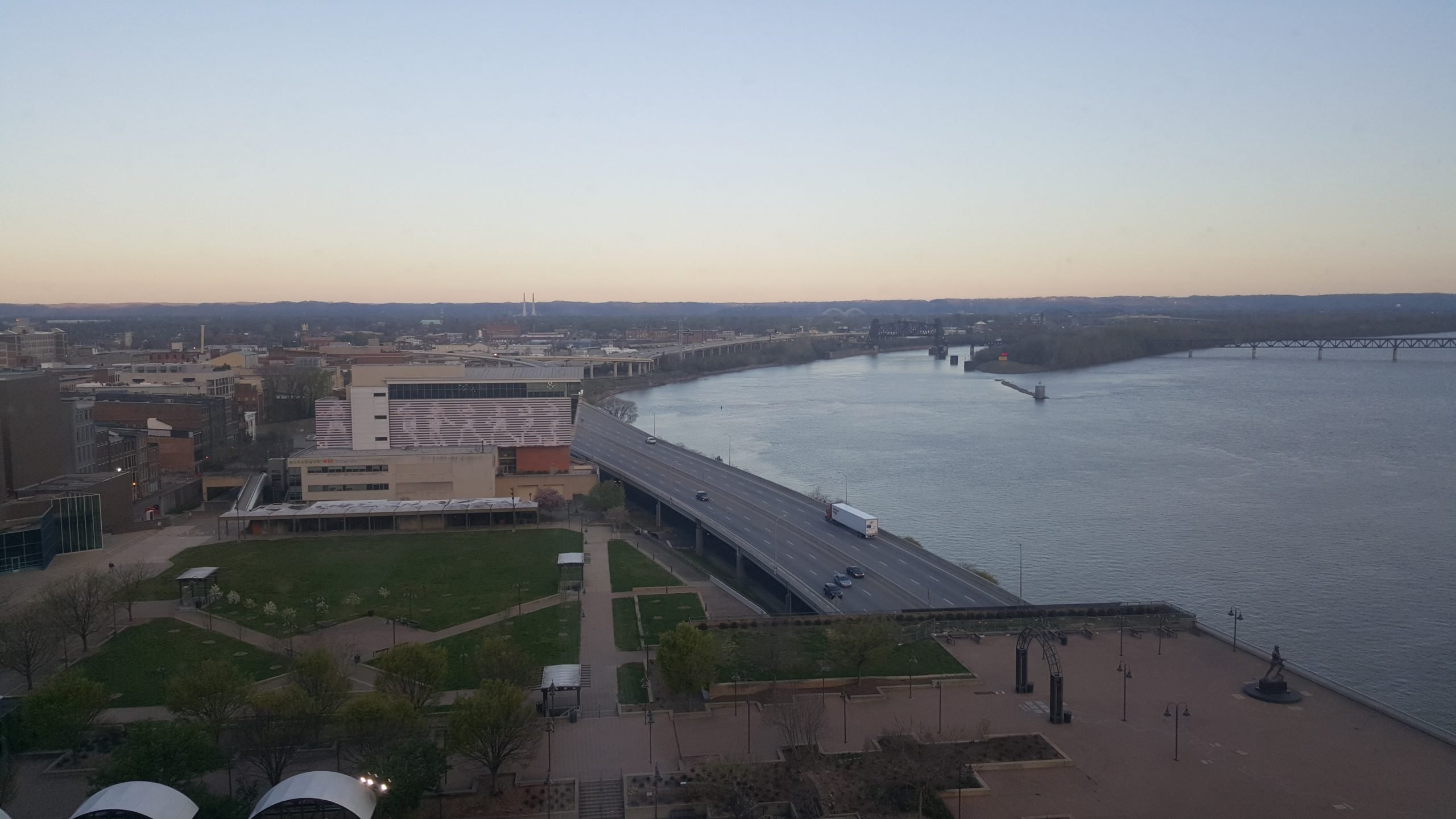 April greetings from Louisville (pictured is the view of the Muhammed Ali Center and the Ohio River from my room at the Galt House Hotel) and Dallas.   This week, we begin the earnings watch list with some questions for AT&T, Verizon, Sprint, and T-Mobile.

Before diving into the questions, I wanted to let you know that Roger Entner, Jan Dawson, and I will be hosting a conference call a few days after the Appeals Court Open Internet Ruling comes out.  Please check my LinkedIn feed or check www.sundaybrief.com for the details.  If the ruling comes out next Friday, I’ll provide the details on the conference call on Monday.

Also, for those of you who will be at the INCOMPAS (f.k.a. COMPTEL) show this week, I’ll be leading a panel discussion Monday morning on trends in wireless with representatives from Microsoft, T-Mobile, and Lumos networks.  Please join if you are at the show and ask a probing question or two.

Four (or more) Earnings Questions We’d Like to Ask

As of the end of last year, AT&T Mexico had 8.7 million wireless subscribers, while Telefonica and Telcel (America Movil) had 23.4 and 73 million wireless subscribers. That equates to just over 8% market share for a brand that’s worth at least 15% market share just for showing up.  Adding a million customers in a quarter is newsworthy, but, considering the capital investment AT&T is making ($3 billion) as well as the brand, it’s not an unexpected number.

While AT&T has not disclosed a long-term target number, it’s hard to imagine that 20% market share by the end of 2020 is a moonshot given their fiber and LTE funding levels.  Assuming the market in 2020 is at least 120 million subscribers (~2.7% wireless subscriber annualized growth rate), that would equate to 32 million subscribers by the end of 2020 or roughly a $10 billion unit (it entered 2016 at a $2.5 billion annualized revenue run rate).  Said another way, AT&T has completed 1.6 million net adds or 7% of their (minimum) 23 million net addition five-year goal.

With $7.5 billion in growth over the next five years in Mexico alone, AT&T deserves a global communications provider designation.  The follow up question is “What’s the halo effect of the Mexico investment on US (likely Cricket) wireless growth?”  We commented a few weeks ago that Cricket is poised to have a very strong quarter (~400K net additions which will be their fourth consecutive quarter at this level), and, while a lot of this is attributed to solid execution, some of their growth has to be tied to a stronger Mexican operation.  Note:  the Sunday Brief post mentioned above focused on the possibility of bundling Cricket with DirecTV. There’s a growing sentiment that more Mexico success will spill over into retail prepaid net additions.

Bottom line:  AT&T’s broad and global strategy needs a corresponding scorecard if they are to receive the credit due for their execution in the financial markets.  If they fail to steer the conversation, they will fall into the same retail postpaid wireless comparisons that will mask the full extent of their efforts.  Communicating the full impact of Mexico is a good starting point.

To answer the question above, let’s look at the performance of AOL since Verizon acquired the company:

The old thesis that “Verizon will screw it up” just isn’t holding up.  Go90 is doing well (top 5 in the Entertainment category in both the iTunes and Google Play stores and Top 100 in free apps overall), and signing up new content (see latest signings here).

Verizon’s potential acquisition of Yahoo would add $8 billion to the bet (using the figures from the Bloomberg article).  That would bring the total media investment to $13 billion and make Verizon one of the top online/ app content producers in the world.  It’s a long way from DSL, Private Lines, collocation and wireless voice, but there’s a growing body of evidence that they could pull it off.

We have shown this chart from Morningstar several times (link is here), but it is worth providing one more time: 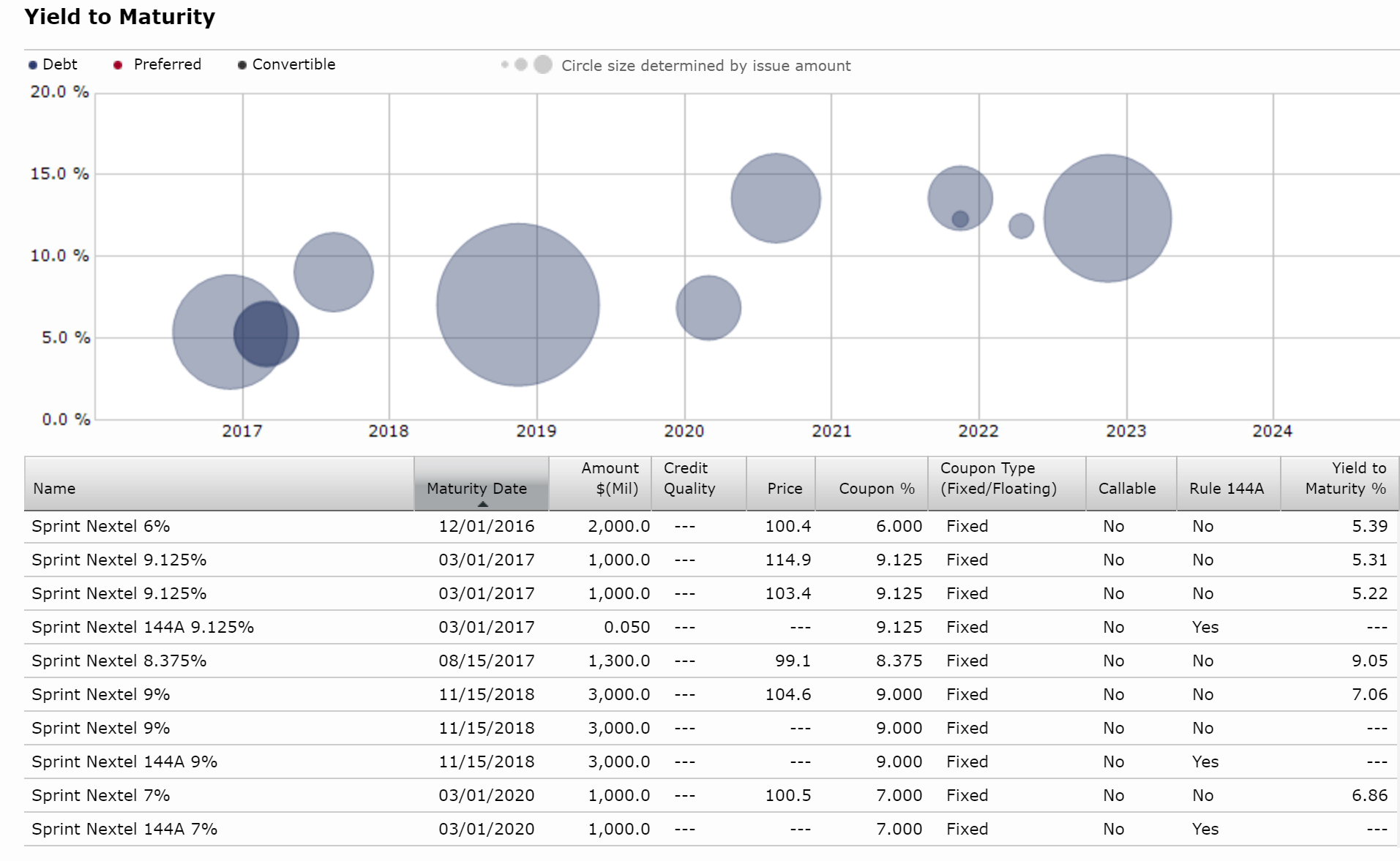 Sprint has approximately $34 billion in debt with $5.3 billion due in the next 18 months.  They have been cutting costs with vigor and constantly looking for ways to improve their network performance (we reported in a previous column that cost cutting will likely take precedent over growth in the first quarter results and result in negative postpaid phone additions).  A sale leaseback of network assets solves the December maturity but March is a different story.

Bottom line:  If the repayment of the December note restores bond market confidence, Sprint’s leasing transaction could trigger a refinancing of some of the March 2017 maturities.  However, if Sprint has to collateralize additional assets, including spectrum, the cash committed to repaying bankruptcy remote lenders could exceed the projected discounted cash flows of the company.  More to come with their April earnings announcement.

The biggest questions raised by many of you are “Does Binge On help or hurt growth?”  and “What are the long-term effects of Binge On?”  We’ll devote an entire Sunday Brief to the overall network pressure that their latest program brings, but the long and short of it is that Binge On helped the network in 2015 and will further help the network in 2016, and will hurt network performance in 2017 and beyond (when T-Mobile has network densification completed and more 600 MHz spectrum to deploy).  Overall, Binge On will put to rest the argument that consumers would gladly trade off paying more for higher resolution.  In fact, the results will likely show the exact opposite.

To support the “it has not hurt network performance so far” let’s examine the RootScore results since the beginning of the year.  As of last Friday (April 8), RootMetrics released 59 market results (out of 125 they review semi-annually).  Of these 59 that have been released, T-Mobile has won (including ties) 13 markets and finished second (including ties) 15 times.  Of these 28 first or second place finishes, they have beaten AT&T 10 times and tied with them 15 times (the other 3 times AT&T finished first and T-Mobile finished second).  These figures represent a big improvement over 2013 and 2014 and continue their LTE expansion and densification started in 2015.

There are no signs of a weakening network from these recent reports.  In fact, it’s very likely that T-Mobile’s quality metrics are improving because of the immediate network benefit Binge On provided.  SD quality is OK for consumers while they are out and about, but at home or in the office, WiFi speeds take over.

Bottom line:  While the long-term prospects of zero-rated data are uncertain, the short-term    benefits are clear – Binge On will be shown to attract and (more importantly) retain customers.  We will know more when earnings are (pre)announced.

Thanks for your readership and continued support of this column.  Next week, we’ll dive into the implications of the Appeals Court ruling on the Open Internet Order (due out this week).  Until then, please invite one of your colleagues to become a regular Sunday Brief reader by having them drop a quick note to sundaybrief@gmail.com.  We’ll subscribe them as soon as we can (and they can go to www.sundaybrief.com for the full archive).  Thanks again for your readership, and Go Royals and Sporting KC!