** Note – I will be at MWC-Americas on Wednesday (all day) and Thursday morning.  Please send a note to sundaybrief@gmail.com if you would like to catch up.  Thx, Jim **

Greetings from Lake Norman, NC (picture of a recent sunrise is shown).  This week, we will discuss four questions that should be asked during earnings calls (which start this Thursday with Comcast, followed by Verizon and Charter on Friday and AT&T and Google the following Monday, Apple and Sprint (likely) on Oct 30 and CenturyLink on Nov 6).  Please note that these questions are not in priority order.  Here’s four questions we’d like to see answered in upcoming earnings calls:

1. To Apple: If Goldman Sachs is correct, and the Apple Card truly is “the most successful credit card launch… ever” how will Apple use these new relationships to increase the iPhone renewal rate?

To AT&T and Verizon:  Do you anticipate that Apple’s new credit card will disintermediate the store purchase and financing experience?  If that occurs, and customers finance their new device through Apple directly, how will that impact revenues, margins, and churn?

We received a strong indication of Apple Card’s success from Goldman Sachs this week when CEO David Solomon revealed on his earnings call that “we believe [the Apple Card] is the most successful credit card launch ever.”  Solomon went on to disclose:

…we have seen a pretty spectacular reception to the card as a product. The approval rates early on have been lower, and I say that that’s a decision, obviously, Goldman Sachs is making as the bank, but we’re doing that in concert with Apple. And it is because we’re quite vigilant from a risk point of view, of not being negatively selected out of the box. Meaning, over time, we’ll start to see better credits appear and the approval rates will go up, where we’ve seen an enormous inbound, we’ve issued a considerable amount of cards. We’ve just been through our first bill cycle, which went smoothly, and so from an operational point of view, it’s gone well

Apple announces earnings on October 30th.  It’s likely that they will not actively promote anything until after the Holidays (if demand is good, and they are throttling activations through selective credit scoring, probably not best to get promotionally aggressive).  However, if Apple attracts 10 million US card holders in the first year (we would not be surprised if this happens), you have to think that the ability to finance select transactions at 0% a.p.r is inevitable.

2.To AT&T: Do the list of divestitures you are working on with Elliott Management include unprofitable local phone exchanges?

To each of the other local exchange providers (particularly rural):  How will you more effectively compete against a clustered (and therefore operationally efficient) cable industry?  Was your concern over valuation when you considered clustering in the past unfounded given the deep losses that have occurred in broadband acquisition over the past decade?

We briefly discussed this in the TSB focused on the Elliott Memo.  In our note, we described the diseconomies of scale arising from island or isolated exchanges in North Carolina.  To prove that the Tar Heel state was not a fluke, we show below the local telephone provider exchange map of South Carolina (link here): 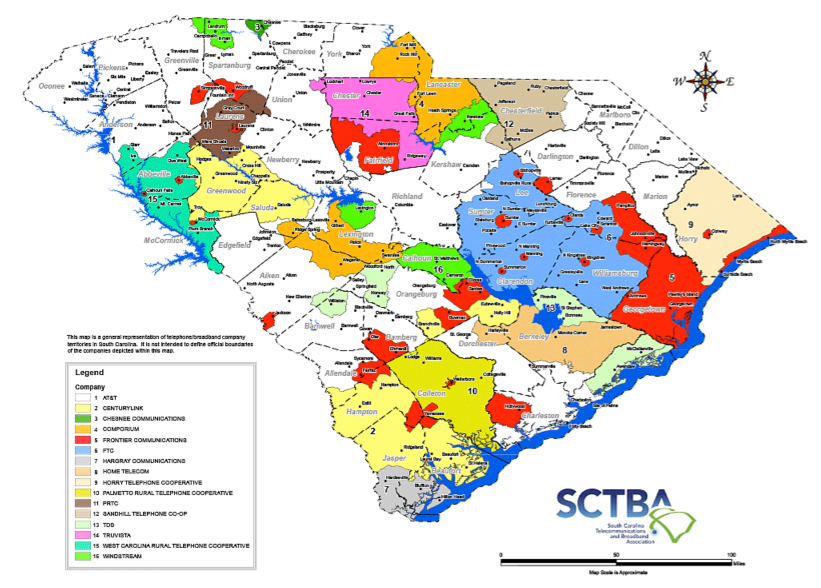 In contrast with this menagerie of local exchange properties, cable broadband providers in South Carolina consist of the following (from the South Carolina Cable TV website and company websites):

With a total population of about 5 million, to have more than 3.6 million (72%) covered by just three providers and more than 4.3 million (86%) by seven providers shows why cable broadband has an advantage:  they have clusters which produce economies of scale.

What is the critical importance of owning and operating the telephone exchange in Florence, SC (population just under 38,000) for AT&T?  Why not pursue a structure with other phone companies in Northeast South Carolina that mirrors the one proposed by Apollo Management for combining Dish and DirecTV assets?  What efficiencies (and increased business opportunities) could be realized from greater exchange consolidation?

How bad is it (likely) for AT&T?  Look at the May 29 Frontier sale announcement of their Northwestern exchanges, where they disclosed that the sold properties passed 1.7 million locations yet Frontier only had 350,000 consumer and business customers (20% relationship penetration).  Does AT&T (U-Verse/ Internet) have a relationship with 30% of the homes passed in Florence?  What are the value prospects, and how do they fit into all of the other things that AT&T is managing?

As for the other local exchanges, how long can they compete with the new T-Mobile, who, like we discussed in last week’s TSB, is promising 100 Mbps fixed wireless service to the vast majority of the United States (including Florence) in a few years?  Is it too late to change?

3.To T-Mobile: How do you continue to drive increased postpaid retail gross additions?  How much of it is driven by new device launch promotions (iPhone 11/ 11 Pro/ 11 Pro Max) versus increased 600 MHz footprint?

We have reported for the last several weeks on the lack of availability of both the iPhone 11 and the iPhone 11 Pro Max at T-Mobile (note: in last weeks report, most of the iPhone 11 issues were driven by specific colors).  Here’s the data for this week: 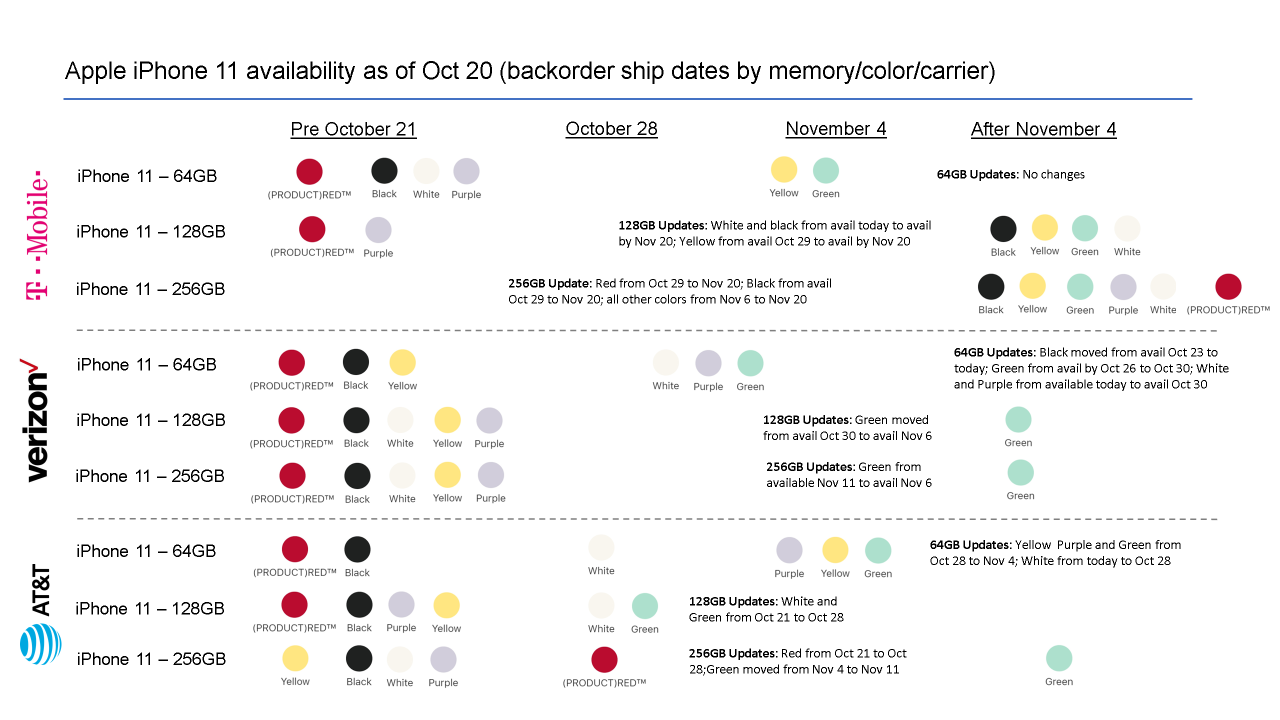 T-Mobile has really been selling a lot of iPhone 11 devices.  Their shortages on the 256GB storage level have been ongoing for three weeks, leading us to believe that this may be a supply chain miss (and perhaps a sign of economic good times).  Not surprisingly for Apple, the iPhone 11 in green (and, to a lesser extent, purple) is harder to come by than more standard red, white, and black.  Now the chart for the iPhone 11 Pro: 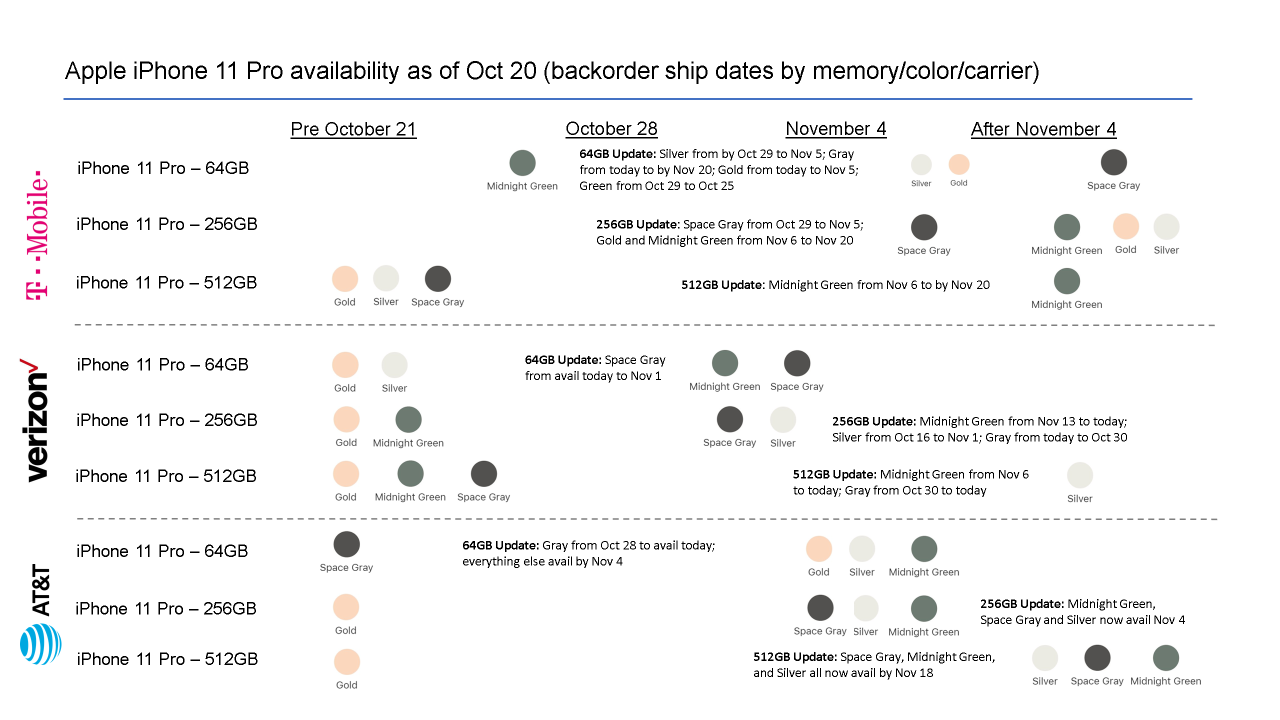 This is also an interesting chart for T-Mobile.  As we have pointed out several times, Magenta does not have a $0 option for either the iPhone 11 Pro or the iPhone 11 Pro Max.  Our guess is that the T-Mobile shortage is continuing for all but the 512GB memory model for two reasons:  a) greater upgrades within the T-Mobile base (presumably to get the 600 MHz coverage and all of the other iPhone features), and b) some movement from other carriers (Sprint?) to Magenta.  These are educated guesses (not stabs in the dark) and should not take away from any 600 MHz progress as a factor.

AT&T’s shortages (basically out of everything that is not gold colored) are likely much more weighted to upgrades.  A lot of changes have happened in AT&T’s network since the iPhone 7 (along with the 6S, most likely phone upgraded to the 11), and the business upgrade cycle is also in full swing (spending any available budget to improve corporate liable handsets).  There may also be a small amount attributable to the FirstNet initiative as their LTE band was not included until last year’s models (XR, XS, XS Max were the first models with LTE Band 14).

Similar trends are seen with the iPhone 11 Pro Max: 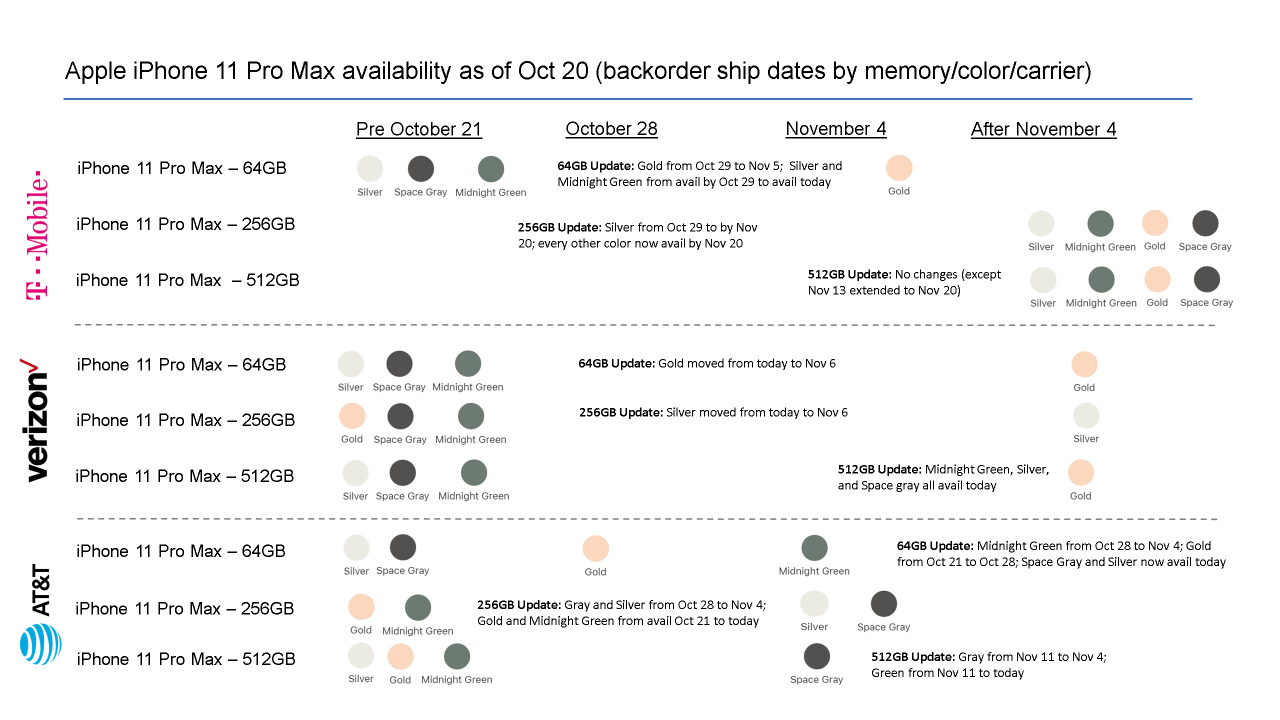 The backlog seems to be much more manageable here than for T-Mobile.  It’s likely that T-Mobile’s iPhone 11 Max shortages are attributable to supply chain/ forecasting, and nothing more.

4.To all carriers (especially CenturyLink): If low latency applications are critical to the value creation of 5G (basically keeping 5G more than a special access open expense reduction), what is your edge data center strategy?

This is a particularly important question for the large wireless carriers (including T-Mobile) and enterprise focused companies such as CenturyLink (who now owns Level3 Communications).  It’s hard to remember, but there was a time when both AT&T and Verizon (and Sprint and T-Mobile) owned several data centers apiece for internal use – both AT&T (Brookfield Infrastructure partners – $1.1 billion – 2018) and Verizon (Equinix – $3.6 billion in late 2016) sold their data center assets.  Investing in dozens (hundreds?) more could be necessary, however, if no closer solutions exist.

Also of interest with respect to edge is the entrance of Pensando Systems, who announced last week that they raised an additional $145 from Hewlett Packard Enterprise and Lightspeed Partners  to fund their edge computing interests.   Pensando has now raised a total of $278 million dollars (3 rounds in 3 years) with a high degree of interest from a wide variety of potential partners.  More on the startup (certainly a candidate for our next “Companies to Watch”) in this CNBC article (John Chambers of Cisco fame is their Chairman).

Also of interest are companies such as Qwilt, an edge video server company that has raised over $65 million from various partners including Cisco, Accel Ventures, and Bessemer.  Verizon has deployed Qwilt as their application edge delivery platform.

Understanding edge strategies is critical with the increase in over the top solutions (such as last week’s Hulu 4K device announcement which broadens their base to include Amazon Fire Stick, Microsoft’s Xbox One, and the LG WebOS TV platforms).  More capabilities will lead to higher expectations and even higher consumption.

Several of you issued lengthy replies to last week’s TSB.  There is no doubt that strong feelings exist supporting maintaining equal outcomes of data packets.  There’s equal certainty that others see S.B. 822 (California Net Neutrality bill) as a stepping stone to more activist state proceedings with respect to cable unbundling (which would clearly deter new incumbent investments in the Golden State).  We decided not to go there in last week’s TSB (our focus was on how wireless companies would treat throttling) but see how and why the ghost of Brand X is more than a mirage to many of you.

One item that I think is undebatable – Congressional action would clearly eliminate the newfound love of Federalism that is breaking out in many state legislatures.  We will write more on this in the future, but we at TSB offer up the following bill parameters for consideration:

The rationale behind this is twofold:  a) Regardless of bit prioritization practices, the presence of 200 Mbps for 4-5 simultaneous users clearly provides a healthy broadband baseline.  This would be based on achieved as opposed to advertised speeds.

This also provides the ability to have lower speeds but uses market mechanisms to drive the mix.  If AT&T wants to offer Gbps speeds for $90/ month, then they will have a smaller fraction achieving this higher speed than if they offered the same product at $50.  The market will reach an equilibrium.

This would also greatly encourage the adoption of 5G services across wireless carriers.  If 50% of the base is wireless and achieving LTE speeds of 100 Mbps, they would need to be offset by 50% of the base experiencing average speeds of more than 300 Mbps.

It would also create a competitive mechanism assuming either telco or cable did not achieve the figure in the first measurement.  Some incremental capital expenditure would also occur (and this can be done prior to having a larger infrastructure spending bill if that is desired).

If Type II were properly enforced (penalties properly monitored and assessed), there would be more impetus to be classified as an information service.  This is a fault of all regulators – state and federal – and should be addressed.

These are very measurable, practical legislative remedies which refocus objectives to weighted average usage (including testing price elasticities to a greater extent) and increased competition.  We clearly believe that the current approach will create a patchwork of network procedures as well as full employment for telecom attorneys.

Next week, we’ll look for clues from Comcast, Charter, and Verizon’s announcements, as well as some previews for AT&T’s earnings and the Time Warner analyst day (Oct 29).  Until then, if you have friends who would like to be on the email distribution, please have them send an email to sundaybrief@gmail.com and we will include them on the list.