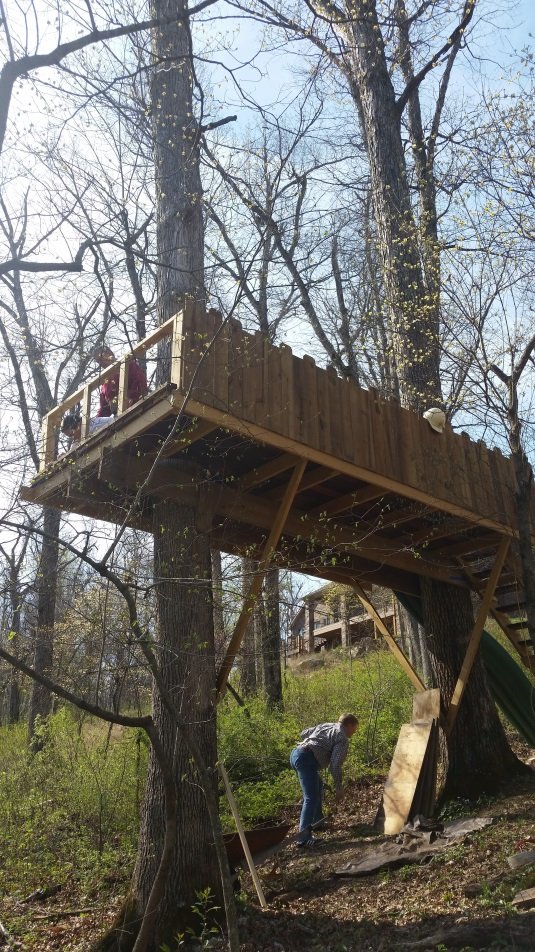 Greetings from Willard (MO), Monroe (LA), Toronto, Austin, and Dallas.  Hopefully you were able to fill last week’s Sunday Brief absence with some family and fun.  As the picture shows, we spent most of our Easter weekend with a giant treehouse construction project on the farm in Willard.  Great times, and elated nephews and niece.

Before diving into first quarter earnings, a quick note on an important acquisition announced last Monday.  Cbeyond, one of the last competitive local service providers in the industry, agreed to be purchased for $9.97/ share by Birch Telecom.  This is an all cash transaction which pegs the value of CBEY at about $323 million (4.1x trailing adjusted EBITDA).  CBEY has long been an innovator in the small business space, providing superior VoIP services, rock solid nationwide Ethernet services, and integrated wireline/ mobile capabiliites.  They are a terrific client, and I wish them all the best.  Full transaction details can be found here.

Many companies announces earnings last week.  In the last Sunday Brief, we reiterated several themes that would mark the first quarter:

a) the disruptor role of T-Mobile in the wireless marketplace (leading to healthy gross and net additions for them, as well as for AT&T, but weaker additions for Verizon and Sprint);

An absolutely giddy CFO usually worries me on conference calls, especially when it’s the CFO of a company the size of AT&T.  John Stephens’ ebulence showed throughout Tuesday’s earnings call and on interviews the following day.  He probably wanted to say “Finally, something worked!” but instead led off the call with “the shift to Mobile Share plans was nothing short of incredible.”  That’s giddiness for a CFO, and there were plenty of reasons for it.

The Mobile Share plan changes announced in February were in response to T-Mobile’s aggressive ETF buyout plan.  As John hinted on the AT&T earnings call, January’s churn and net porting numbers must have been worrisome, not only for T-Mobile but for Sprint (who introduced Framily) and Verizon.  But the new Mobile Share plan introduction had an even greater impact:  AT&T beat Verizon in the first quarter.

February’s Mobile Share for Families announcement drove the number of Mobile Share plans up by more than 50% (really in the last two thirds of the quarter).  This, combined with the announcement that AT&T will allow any customer who has been a postpaid customer for more than six months to switch to a Mobile Share plan free of charge (see here for analysis) resulted in 40% of all smartphone gross adds and upgrades to be on Next (compared to 15% in 4Q 2013).

The end result was nothing short of incredible for AT&T as the following table shows (note – Verizon started selling the iPhone in Q1 2011):

For years, the best AT&T could hope to achieve against their larger rival was a 60/40 net add split.  This occurred, in part, because AT&T lagged Verizon in LTE deployment (Verizon now has 304 million POPs covered; AT&T just under 280 million), but also because AT&T lacked a first-mover advantage.  In an extremely ironic twist, it’s the “noisy competitive environment” (John Stephens’ term used throughout the earnings conference call) that caused AT&T to move into a leadership position. 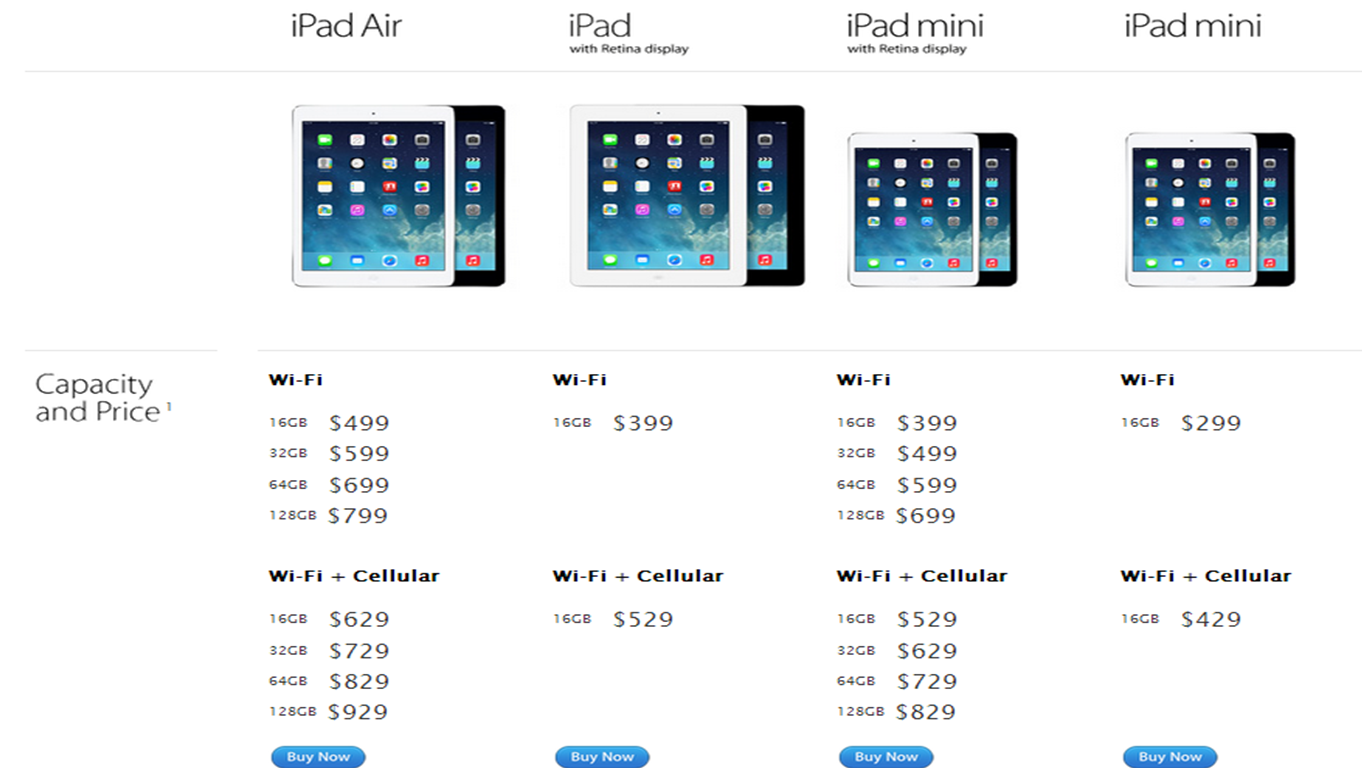 AT&T can maintain this leadership position by taking a play out of the T-Mobile playbook and following them into the “no additional upcharge” for tablets that are equipped for the AT&T network (these charges currently run $100-130 more – see picture on right for exact differences for the iPad lineup).  This would drive an entirely new growth curve for AT&T and the entire industry.  Verizon and the rest of the industry would likely follow suit, at least with LTE-only iPads and Kindles.

There are plenty of things at AT&T that are not working:  Transport (down 12.2% year-over-year) and non-strategic IP services (down 9.7% y-o-y) continue to collapse, and voice compression continues in both business and consumer (down 10.4% year-over-year which represents an improvement).  AT&T’s wireless reseller division has lost more than 1 million subscribers over the past year (a lot of this very high margin 2G machine-to-machine traffic).  And wireless SMS and voice traffic growth is non-existent and in secular decline.

But for now, AT&T is the leader of the pack, thanks to More Everything for Families and their Next pricing plan.

Verizon announced earnings on Thursday morning, after AT&T earnings had a full day to sink in.  Verizon CFO Fran Shammo was very matter of fact in his description of the quarter and of Verizon’s strategy in general:

The ingredients for success are unchanged:  solid operational execution and a disciplined focus on meeting our financial objectives and creating value for our shareholders. With an eventful first quarter behind us, I would say we are off to a strong start.

Verizon reported very strong EBITDA margins (with or without the effect of incremental Edge sales) on service revenue growth of 7.5%.  But their ability to keep the basic phone and 3G smartphone customers weakened in the quarter, and it likely came as a benefit to T-Mobile (and, at a smaller level, to Sprint).  Verizon lost visibility to the “edge cases” (pun intended), and some of the core base also went along with these customers for the ride.

As a result, as the following table shows, Verizon lost accounts in the first quarter:

First off, we did a price increase in the fourth quarter and every time we do a price increase we always see some pressure in the churn in the following quarter.  But also we had probably one of the worst winters on record here and people did not want us in their houses to install FiOS…  Competitive pressure did increase in the first quarter.  We did not respond immediately because of the environment that we are dealing in with the weather.  So we waited.  We became more aggressive in March.  And I would tell you that exiting the quarter our pipeline has grown and I have a viewpoint that the second quarter will be back on track from a net add perspective.

The winter was bad, but was it really that different from Comcast’s (where High Speed Internet net additions were down 12%) and Time Warner Cable’s (who had their best High Speed Internet net additions since 4Q 2012)?  There is more going on here than meets the eye on the FiOS vs. Xfinity/ Optimum/ Roadrunner matchups.  FiOS is losing on price/ value below the 50Mbps speed tier, and cable knows it.

There’s a lot more to say about Verizon’s wireline earnings (they continue to be sick, and not in a good way).  We’ll get to that in next week’s column.  For now, Verizon must consider two very important decisions:  1) How to prepare for a resurgent AT&T and a disruptive T-Mobile, and b) How to regain price/ value consideration versus Comcast and other cable competition below 50Mbps.

Next week, we will have a lot more on cable earnings (I am out at the cable show in Los Angeles Monday through Wednesday) and get additional insights into the wireless industry when Sprint announces earnings.  If you have friends who would like to be added to The Sunday Brief, please have them drop a quick note to sundaybrief@gmail.com and we’ll subscribe them as soon as we can (and they can go to www.sundaybrief.com for the full archive).