Fiber Always Wins (Until it Doesn’t)

Greetings from Davidson, North Carolina, where the hazy days of summer will soon give way to the bustle of orientation.  There’s plenty to cover in this week’s TSB, and our main topic will be on the importance of fiber in the telecom industry.  But first, a brief comment on Verizon’s wireless pricing changes.

Before diving into commentary, a quick reminder that we will be posting a “Deeper” section for each TSB on the website.  Here is the Deeper section from last week’s TSB (State AG’s case against the T-Mobile/ Sprint merger).  We usually post these by Tuesday evening.

Verizon’s Bouquet of Plans – Something for Everyone?

When Verizon announced their pricing plan changes on Friday, August 2, the collective response was “Why?” 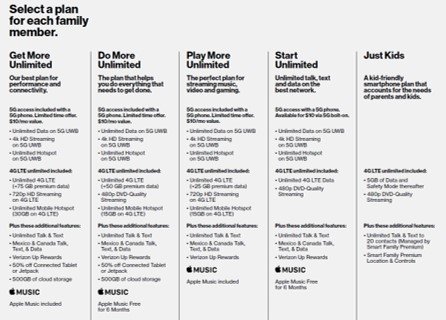 A deeper inspection of each change explains Verizon’s strategy.  They are continuing to lead with a plan that includes no fixed allotment of high-speed data (the Go Unlimited legacy plan was changed as well to “Day 1” deprioritized data).  Verizon also put a stake in the ground:  the minimum rate for any individual 5G plan (or first line in a multi-line scenario) is $80/month.  Why one would purchase a Start Unlimited plan for $80, and forego a fixed allotment of high-speed data (and Hotspot capabilities) offered by the Do More Unlimited (50GB, 15GB can be Hotspot) or Play More Unlimited (25GB) is a head-scratcher.  Bottom line: the 5G pricing tier starts at $80/month with no 4G LTE premium data allotment.

The other interesting development (outside of the $5/ line/ month across the board price decrease) is the continuation of 720p HD video streaming on Verizon’s best plan.  Customers can get 1080p 4G LTE streaming for an additional $10/ month (total cost of $100/ month with taxes & fees versus T-Mobile’s 1080p Magenta Plus plan which includes 50GB of premium data as well as taxes and fees for $85/ month or AT&T’s 1080p Unlimited & More Premium plan which includes 1080p but only has 22 GB of premium data allotment for $80/ month).  It baffles me that Verizon sells devices with amazing screen solutions like the Samsung Galaxy Note 10 (3040 x 1440 pixel screen – Quad HD+) and the Apple iPhone XS Max (2688 x 1242 pixel resolution), advertise (and win) speed test awards, yet limit video streaming to ~5-8 Megabits/ second.  In the past, the argument was that smartphone resolutions weren’t good enough to tell the difference, but manufacturers have caught up and 5G adoption is still several quarters away for most wireless customers.

Bottom line:  There are likely no broad implications to the wireless industry from Verizon’s recent pricing changes.  This should not trigger a response from AT&T, T-Mobile or Cable (although making Full HD (1080p) standard on all pricing plans would be a very un-carrier move for T-Mobile).  It’s likely that if AT&T were to change their pricing plans as a part of a broader 5G announcement, they would align monthly rates to speeds (e.g., Cricket Wireless is cheaper but download speeds are capped).  Big Red is in a holding pattern until they can fully deploy 5G (more on that below).

Fiber Always Wins (Until it Doesn’t)

Meanwhile, Verizon was building their FiOS network which at peak (2015, prior to the sale of former GTE properties to Frontier) passed 20 million homes.  While the current number of homes passed is not published, most analysts peg the post-Frontier total at 15.5-16.1 million homes.  Given Verizon’s current FiOS internet count of 5.84 million, they have approximately 37% share, with about 5-10% subscribed to copper or wireless alternatives and the remainder (50-55%) subscribing to cable.  FiOS comprised 87% of the total 2018 Consumer Markets division revenue.

Verizon’s FiOS fiber experience and the acquisition of XO Communications led to the formation of the One Fiber initiative (2019 RCR Wireless article on Fiber One is here which includes details of Verizon’s multi-year purchase agreement with Corning).  This cross-company cataloguing and joint planning is reshaping how Verizon invests billions of annual capital dollars nationwide.  As a result, as they stated in their most recent 10-K, “We expect our “multi-use fiber” Intelligent Edge Network initiative will create opportunities to generate revenue from fiber-based services in our Wireline business.”

Bottom line:  FiOS fiber deployments throughout the Northeast are extremely valuable and provide Verizon with a time-to-market advantage.  Nationwide, the fiber that is being deployed for 5G will improve wireline/ Ethernet/ cloud competitiveness.  One division feeds the other. 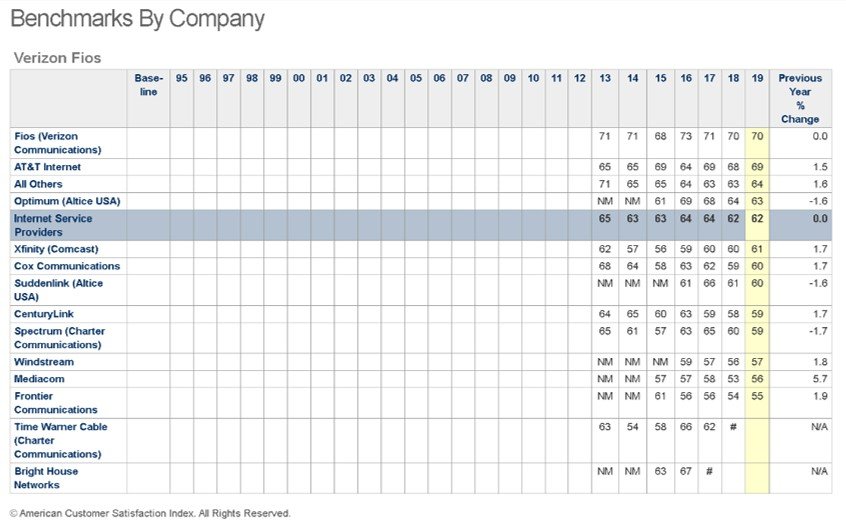 Customers love FiOS.  The nearby American Customer Satisfaction Index (ACSI) Internet Service Provider satisfaction survey results clearly show that both Verizon and AT&T (U-Verse fiber now passes more than 12 million homes) are preferred over cable.  Notably, Verizon’s lead over Altice (Long Island cable provider) is back to seven points.  This is one of several factors driving Altice to deploy fiber to the home (the only US cable company to commit to a 5 million home buildout).

Similarly positive results can be seen from the most recent J.D. Power Residential Wireline Survey, with Verizon taking top honors for both Internet and Television service.  Fiber speeds result in higher spending per household, and the long-term maintenance costs for fiber have been proven to be much lower than copper.

When does fiber not win?  Overbuilders using fiber are having mixed results.  The most heavily marketed competitive fiber provider over the past ten years, Google Fiber, has been a dud – there’s no two ways about it.  Experts like Blair Levin and Larry Downs (Harvard Business Review article here) believe that Google was using the Fiber effort simply to prod incumbents to accelerate their broadband deployments, but that’s inaccurate – they are still investing, expanding, and trying to be a disruptive broadband provider in their markets.

Google Fiber is generating the majority of Alphabet’s “other revenues” ($162 million in 2Q) and contributes in a small part to the content commitments needed to make YouTube TV affordable (Google TV customers are less than 75,000 and YouTube TV likely has more than 1 million paying subscribers).  Analysts estimate that Google Fiber probably serves no more than 475,000 broadband subscribers today, with 20% of those in their first market – Kansas City.  Google’s efforts to expand in Louisville using nano-trenching (two inches into the asphalt as opposed to six for micro-trenching) failed miserably and, as a result, Google Fiber ceased operations in Louisville last April (CNET article here).  Their acquisition of Webpass, which uses 60GHz spectrum to transport wireless data between fiber-fed buildings, is finally beginning to expand beyond their legacy markets to Austin (see blog post here).

Google Fiber would best serve its shareholders by either a) selling the asset or b) initiating efforts to wholesale fiber to wireless providers and business-focused managed service providers.  The value of deployed fiber in highly desired suburban neighborhoods would be welcomed by a variety of telecommunications companies.

Which brings us back to Verizon.  Could they have a joint build and/or fiber swap relationship with Google?  At least enough to enable Webpass (through Verizon’s XO communications asset) to expand rapidly to 60/80/100 markets? That would shake things up considerably, and multi-dwelling units are not a target of Google’s 5G initiative.  It isn’t lost on most telecom industry followers that Google decided not to initiate any builds in Verizon’s legacy Northeast telco territories.  Given their fairly strong corporate relationship (Pixel, YouTube TV), why not deploy together?

While Google was busy doing their initial rollouts, Frontier was acquiring the former GTE properties from Verizon.  They did this in two primary transactions:

At the end of 2016, Frontier’s service territory looked like this (5.4 million customers including 4.1 million broadband lines spread across 29 states): 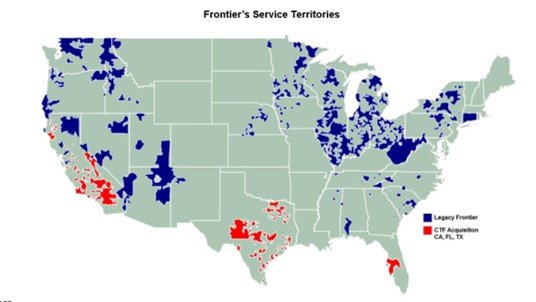 Since that time, the rest of the broadband industry has continued to grow, but Frontier has managed to lose 1.1 million customers (> 20% of its base) including 0.5 million broadband customers (> 12% of the base) in a mere 10 quarters.   Customer churn is rising and currently exceeds 25% on an annualized basis.  Even though the fiber base is being upgraded to 10 Gbps capacities, the FiOS base continues to lose customers.

We talked at length about Frontier’s woes in the TSB titled “What’s Changed Over the Past Three Years?” Last week’s stock performance (down an additional 27%) has significantly narrowed Frontier’s options.

Bottom line:  When does fiber not win?  When it’s the secondary/ tertiary focus of the company (Google), and when it’s hampered by the pressures created by aging copper plant (Frontier).

Billions of dollars of value have been created from fiber deployments, and local exchange providers (AT&T and Verizon) should be able to leverage previous fiber deployment for small cell and other high-bandwidth deployments.  Fiber wins… most of the time.

Next week’s issue will explore the industry implications of Apple’s new credit card (CNBC teaser article here).  If you would like a copy of either the Top 10 Trends or the IoT Basic presentation discussed in last week’s TSB, please let us know at the email below and we’ll get you a copy.