Everyone Gets a Headline This Week 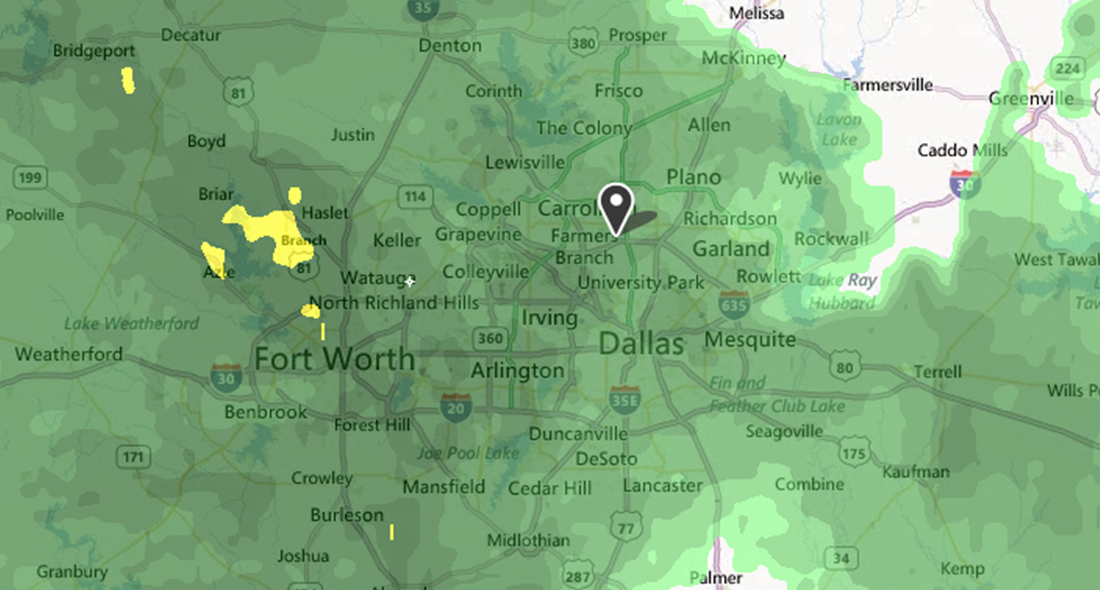 Greetings from Dallas, where the traditional summer heat is breaking for two days (Minneapolis is forecasted to be 10 degrees warmer today and 15 degrees warmer tomorrow than Dallas).  However, there is no break from the blistering pace of telecom news that occurred this week.

On Friday, AT&T announced that they were acquiring Leap Wireless for $15 per share in cash.  The transaction, including the acquisition of $2.8 billion in net debt as well as proceeds from the sale of the Chicago “A Block” 700MHz spectrum, is valued at just under $4.2 billion.  While this transaction represents an impressive premium to Leap’s closing share price on Friday, it’s one fifth of the amount MetroPCS was willing to pay for Leap’s assets just six years ago (see the Fierce Wireless article here.  It’s a “What were you thinking?” moment for the Leap Board).

Leap Wireless (a.k.a, Cricket) has a lot of spectrum, particularly in the AWS band, that AT&T can pair with its spectrum portfolio to produce a large LTE coverage area.  Here’s the AWS coverage areas for Leap (the hashed area is the result of Denali Holdings’ win of the Great Lakes spectrum band) as well as for Cingular: 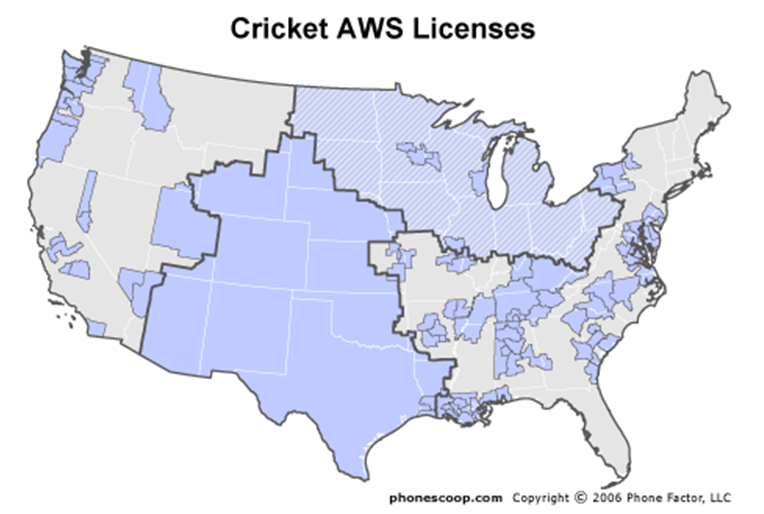 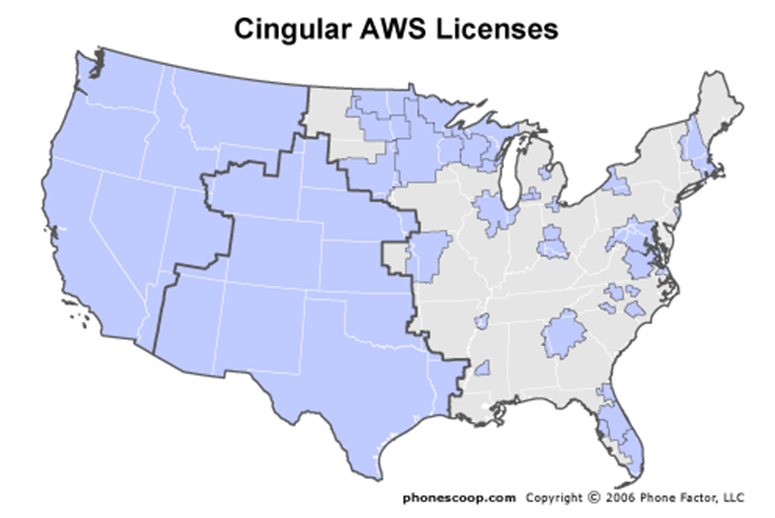 While is important to note that the large swaths of blue above are not in the same AWS block, they are in the same band.  This improves AT&T’s coverage in the Great Lakes area, and complements AT&T’s 700MHz LTE coverage in the Eastern US.  For a good spectrum band chart, click here for Phone Scoop’s tutorial.

That announcement dropped late Friday, and it’s nearly certain that there will be another bidder for the Leap Wireless asset.  Regardless, this transaction will drive up spectrum values for remaining holders of 700MHz, 1900MHz, and AWS spectrum bands.  C-Spire, US Cellular, Ntelos and other smaller (private) companies will be receiving phone calls.  It’s a good day to be an asset owner.

It’s not a good day, however, to be a smartphone provider.  This week, we learned just how bad sales of the Blackberry Z10 were in the second quarter as AT&T commenced a fire sale on the newly released Blackberry.  Here’s the listing on Amazon – $49.99 (down from $199.99).  Best Buy has the Blackberry Z10 listed at FREE. 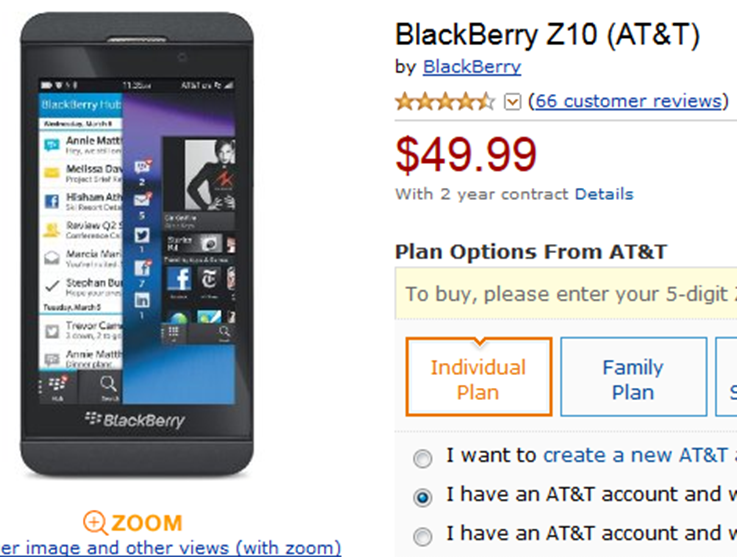 This does not appear to be because the phone itself is defective.  Over 225 people have reviewed the device on www.verizonwireless.com and it is clear that those who own the phone adore it (4.4 stars out of 5.0; 85% or reviewers recommend the phone).  However, it lacks enthusiasm from shartphone switchers, at least compared to the other new phone entrant, the Nokia Lumia 928.  It’s one of the highest rated devices on Verizon Wireless with 4.8 stars and a 95% recommendation level.

Blackberry’s CEO, Thorsten Heins, referred to “lessons learned” at Blackberry’s annual shareholder meeting this week.  One of those lessons learned is that the bar for switching phone manufacturers and operating systems is very high.  Blackberry has a real price point problem on its hands as they ready the US rollout of the Q5 in a few months.  Not much room for a “scaled down” version of the Z10 or the Q10 with pricing for the Z10 at or nearly free.  There are many chapters left to unfold with Blackberry, but the Z10 launch will be remembered as one of the most taxing times in the Canadian company’s history.

On the opposite end of the spectrum comes the super-premium Nokia 1020.  As one reviewer put it, “You can sum up Nokia’s just-unveiled Lumia 1020 in three words:  41, mexapixel, camera.”  Nokia held a pretty well attended launch in New York City this week, where reactions to the camera were generally positive.  C|Net proclaimed, “The Lumia 1020 puts the mega back in megapixels.”  However, there are concerns that there is too much camera focus in this model, and more than one analyst worried that it could relegate Nokia to the “niche” market. 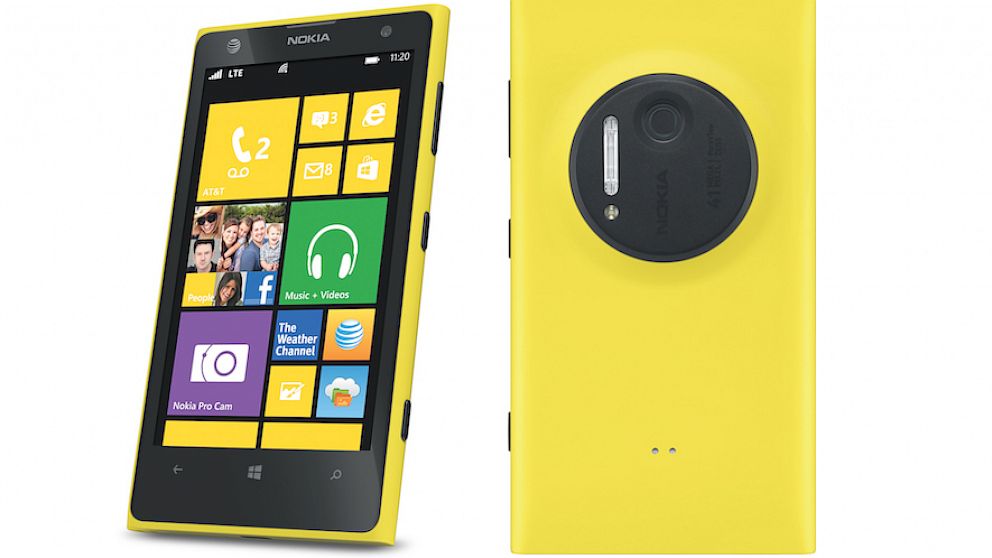 I think there is a much larger market for image capture than many expect, especially with the social media-focused crowd.  This is a phone that consumes LOTS of data (even with a 5 MP “shrunk for social” version of the picture, there’s the potential for many more uploads), and with the blogosphere continuing to demand higher resolution photography, there are many who will want this device.  The accessories are fantastic.

Admittedly, this is not a device for everyone, and Nokia will need to balance this with a lineup that satisfies a palate of diverse smartphone budgets and interests.  Without a doubt, Blackberry owns the keyboard phone.  And now, without a doubt, Nokia owns the picture phone.  They are both feet in the very large and unforgiving doors of smartphone incumbency.  If Nokia can turn the corner on (business) applications, and then offer free Gigabytes of wireless data usage over AT&T for new 1020 buyers, we could have a challenger to the Galaxy S4 in the making.

In case you missed the significance of the last statement, let me reiterate:  Smartphone differentiation, particularly for challengers, can be achieved with a) more storage (Microsoft Drive) and also b) application-driven subsidy (e.g., first 500MB of data charges to and from Microsoft Drive are free for the first year).  AT&T can accommodate these changes today, and I would not be surprised if a “limited time offer” is extended to new Lumia 1020 users to allay fears about the increased data usage a 41MP/ 5 MP phone can drive.

As Nokia moves to change its position in the US phone market, their chief partner, Microsoft, announced a substantial restructuring on Thursday.  The chief outcome of the reorganization was a functional structure, led by four engineering-focused groups:  OS, Apps, Cloud, and Devices.  This change should help Nokia as they integrate the Lumia product line into the Xbox2 and other products Microsoft will introduce.

There have been many debates about Separate Business Units (SBU) versus functional organizational models.  Clearly, Microsoft sees a more integrated software/ hardware future (which seems to be the trend), and the change from traditional PC to Mobile/ Tablet computing is occurring at a very rapid rate.  However, the SBU function allowed Microsoft to be competitively focused in the Enterprise space against business-oriented companies like Oracle and Cisco.  This is not impossible in a functionally-aligned organization, but it’s certainly a lot harder to hear the voice of the customer when there is no division “lead” with P&L authority and responsibility.

Also, Windows 8 has not been wildly embraced, which goes to show that too much change can backfire.  At the end of June, Microsoft announced Windows 8.1, which contains a host of features specifically designed to ease the transition from Windows 7 to Windows 8.  A full recap of the Windows 8.1 features is here.  Any reorganization should be able to definitely answer the question “How will Microsoft’s customers benefit?”  I’m not sure that the Windows user community benefits from this reorganization.  If anything, it’ll result in more changes with less regard to the velocity of the user impact which could backfire on Microsoft’s PC-based business.

Microsoft’s reorganization helps apps.  It definitely helps their consumer business, especially Microsoft Drive integration.  But will it improve customer interest in Windows, and will it create a more competitive Enterprise presence?  That appears to be seen.

If spectrum-driven acquisitions, super-premium smartphone announcements, and the reorganization of one of the most important forces in technology aren’t enough, we had individual and family pricing plan changes announced from two of the four largest US wireless carriers this week.  Given the length of this week’s article, we’ll devote the entirety of next week’s Sunday Brief to an economic analysis of T-Mobile’s JUMP (Just Upgrade My Phone) and Sprint’s Unlimited, My Way plans.

Until then, if you have friends who would like to be added to this email blog, please have them drop a quick note to sundaybrief@gmail.com and we’ll add them to the following week’s issue.  Have a terrific week!