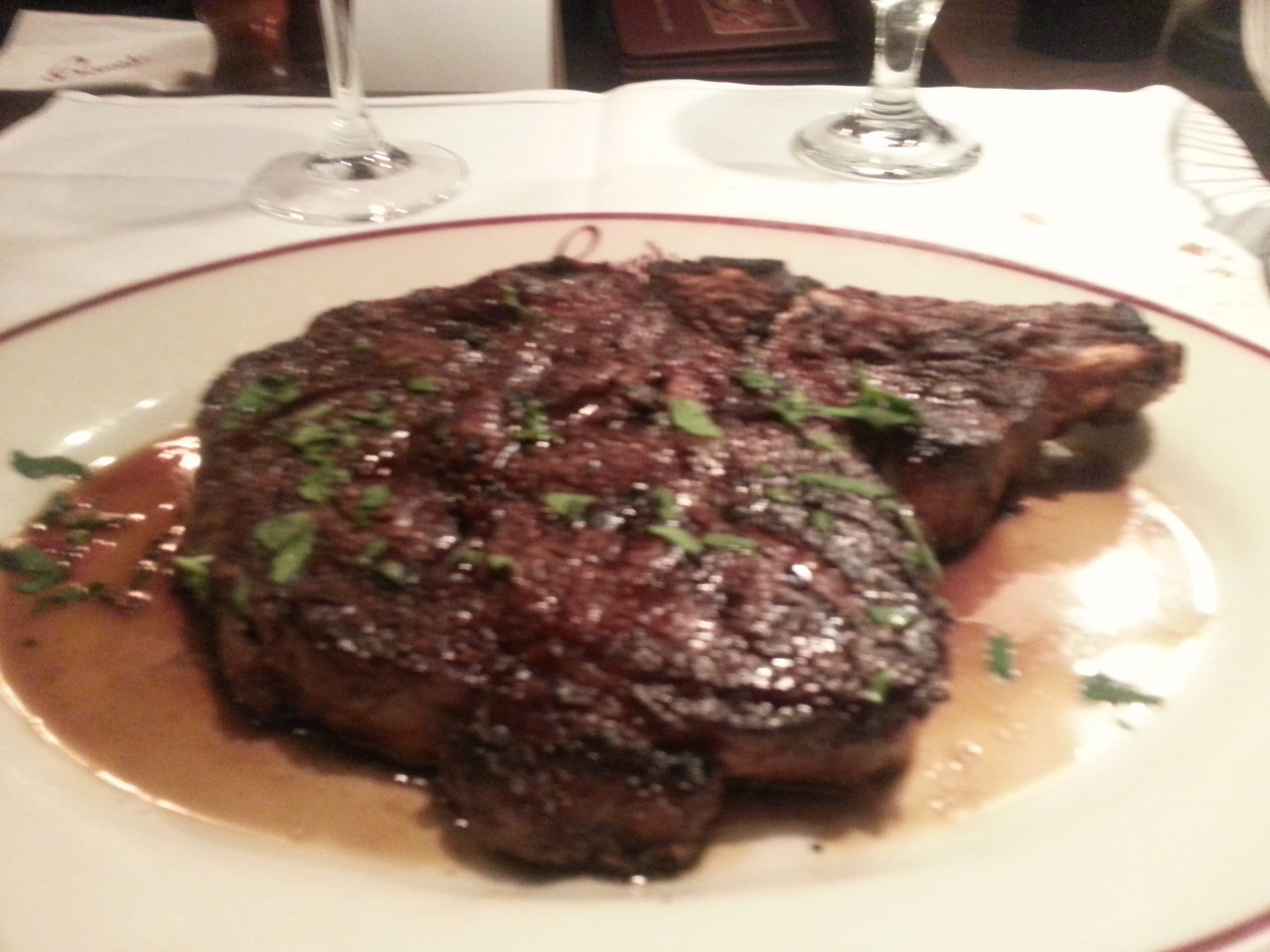 Greetings from Kansas City, Austin, Atlanta and Dallas.  The picture to the left is of the bone-in ribeye at Bones in Atlanta.  It’s the best steak outside of Kansas City.  Great ambiance, terrific food, and a fabulous conversation with several of you.  I needed a few extra hours at the gym after eating it, however.

Before we analyze Verizon’s earnings, a couple of comments on last week’s article.  Net neutrality is an emotionally charged topic, and it’s clear that both sides of the issue make strong arguments (I have listened to both sides for the past eight years).

As an entrepreneur with a particular interest in getting a “fast lane” through wireless networks (delivering caller information as fast as possible to the mobile device was the heart of the Mobile Symmetry value proposition), there were many roadblocks erected to success.  Nonetheless, even with no fast lane available, we were able to consistently deliver detailed caller information (relationship to calendar, shared groups, internal customer databases, even in-app short messages) by or during the second ring.  Short, direct calls to a small number of databases made this possible.  Congested 2G and 3G networks increased the array of delivery times.

While Mobile Symmetry was ahead of its time, the need for greater access to operating systems and networks is increasing rapidly (as of today, Mobile Symmetry and other real-time caller ID apps will not work on iOS as it is the only operating system without an open call control interface).  The decision-making process is very complex, as all of the major smartphone operating systems work on a global basis.  However, the “weak link” principle applies to applications, and in many cases, consistently fast network access is the weakest link.

Is regulatory oversight needed?  Definitely.  Should equal regulatory oversight be applied to Apple’s and Google’s Android operating system decisions in the future?  Absolutely.  However, if customers (and application providers) want priority, there’s no reason why operators should not have the opportunity to further monetize their networks, provided that bandwidth to the home continues to grow. 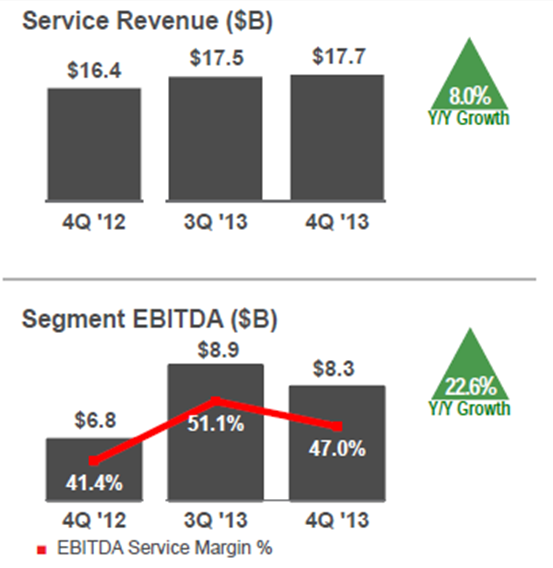 This is a perfect segue to Verizon’s earnings.  Fran Shammo, Verizon’s CFO, led the fourth quarter conference call which was heavy on fourth quarter information but expectedly light on 2014 and 2015 projections given the pending shareholder votes.

“Impervious” was the word that came to mind as Fran recited improved metrics and earnings.  Verizon’s monthly postpaid churn (0.96%) was impervious to the Bring Your Own Device offerings that T-Mobile/ Metro PCS accelerated in the fourth quarter.  Verizon’s stringent upgrade rules appeared to be impervious to the frequently advertised plans from competitors to upgrade devices at discounted rates.  With all of the Machine-2-Machine activity, Verizon managed to continue strong growth outside of smartphones.

All of these changes translated into consistent profitability, with wireless service EBITDA margins hovering around 50%.  Capital spending was $16.6 billion for 2013, consistent with the guidance provided by Verizon at the beginning of the year.  Free cash flow for the year exceeded $22 billion, more than Sprint and T-Mobile combined for the past five years.

Fran was unable to share specifics about how Verizon would accelerate shareholder value after the Vodafone transaction closed.  However, there were plenty of hints dropped in the conference call.  Here are three areas where Verizon will seek to capitalize on the combined asset capabilities:

What does this mean?  First of all, when Verizon Wireless devices connect to a Verizon FiOS router, they will receive a significantly improved experience.  To the extent that the Verizon network is the bottleneck (and not the content’s server), customers will see a faster connection.

Verizon Wireless devices will seamlessly connect to the router.  Interfaces on the device will periodically remind the customer how much they are saving on overages because they are connected to FiOS (Quantum).  And the connectivity ease of over the top content to the TV will be apparent.

Verizon may also try to apply these same rights to FiOS locations outside of the subscriber’s home (small office, friend’s FiOS home, etc.), just as the cable industry is trying to do with their Cable Wi-Fi SSID initiative.

If you are an AT&T, Sprint or T-Mobile customer connecting to Verizon’s in-home router, you will receive “best effort” performance which is what exists today (or they could negotiate a premium Wi-Fi access agreement with Verizon).  Verizon Wireless customers will receive differentiated service.

I would not be surprised to see Verizon take even bolder steps than these (e.g., the ability to access highlights/ full shows over mobile devices of things you watched over FiOS last night).

Because of the corporate structure that previously existed, this degree of integration was not possible.  Verizon Wireless did not care about FiOS TV/ Internet market share and Quantum (premium Internet tier) adoption.  Now it matters a lot, and Verizon is going to improve their wireline consumer growth as a result.

Now, under one service level (which should extend to the cloud server), Verizon offers a business-grade product with unique discounts based on total spending.  Need a secure backup file sharing service with that tablet?  There will be several to choose from, and some might even include 1GB of free “synching” data per device per month.

Also, in the enterprise space, Verizon could make a very bold move into time-shifting of data delivery.  Some data (e.g., point of sale transactions) would be synchronized immediately, while others would be delivered during lower load hours (1-4 a.m.).  This process is widely underway in the wired world, but adoption of this for wireless integration has been lower.

For the small branches of enterprise accounts (e.g., every Burger King or Exxon gas station location), the business equivalent of Home Fusion would be a welcome addition, especially outside of franchise territory.  When combined with enhanced security and service level agreements, a wireless broadband alternative would pose a real threat to CenturyLink,  Windstream and Frontier.

Product innovation is not the only area where Verizon will benefit from a single organization.  Applying the Six Sigma Lean principles will remove a lot of duplicative sales and support resources.  Aligning incentives and compensation as early as possible in 2014 will be critical.

The mere thought that wireless and wireline technologies live in parallel universes is laughable.  Eventually every wireless radio connects to fiber, whether it’s a FiOS router or a Gigabit Ethernet connection to the tower.  Verizon knows the power of integrated connections, and, while they are not quite impervious to competitive pressures, they now begin a multi-year process of making the wireline and wireless worlds indistinguishable.

Next week, we’ll compare and contrast Verizon’s and AT&T’s earnings (due this Tuesday).  For a quick primer on AT&T’s 3Q, their previous release is here.  Verizon’s fourth quarter and full year financial results are here.  Until then, if you have friends who would like to be added to The Sunday Brief, please have them drop a quick note to sundaybrief@gmail.com and we’ll subscribe them as soon as we can.  Have a terrific week!