Greetings from snowy Nashville (where I was a technology speaker at the 2020 Country Radio Seminar) and Charlotte, NC.  This has been a very busy week for all of us (our Mobile-World-Congress-canceled schedules were quickly filled), and there is a buzz in the telecom industry that I have not heard for some time.

A quick thank you for the dozens of comments on last week’s column. We had our strongest week since the Sunday Brief was relaunched last July, and the depth of questions were substantial.  I think I addressed everyone’s questions and am reposting one response as a part of a larger follow-up column this week.

Several of you asked that we talk about device compatibility from Boost and Sprint to the new T-Mobile (referred to going forward as just Sprint).  As we hinted in the column last week, there’s not as much transition for smartphone customers as existed in the Metro PCS acquisition.  The chart below (and avail as a PDF here: device compatibility) summarizes 50+ devices using the categories “Easy,” “Firmware Update,” and “Avoid.”

The best scenario for an existing Sprint customer is to have a device that works well on the existing Sprint and T-Mobile networks – in industry jargon, a “Universal” or “U SKU” device.  Ideally, this device would also have T-Mobile’s low-band LTE spectrum available as well (LTE Band 71).  All of the devices shown in the chart carry T-Mobile’s 700 MHz spectrum (LTE Band 12), but in-home and rural coverage will significantly improve if the customer has LTE Band 71. 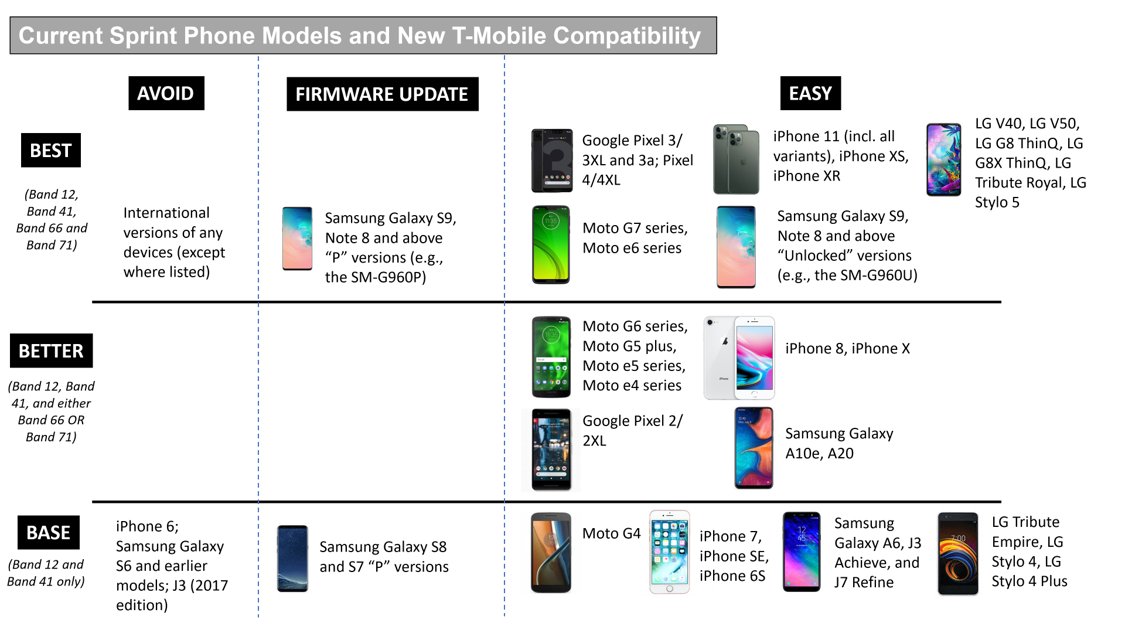 On top of this, all Sprint smartphones sold since 2013 (and perhaps earlier – we only went back seven years) have the Clearwire (2.5 GHz) band (LTE Band 41) which, as we discussed in last week’s column, is going to be more robustly deployed by New T-Mobile in the coming months.

Here’s a summary of the rows in the above chart:

Apple:  Good news for current Sprint Apple customers.  Starting with the iPhone XS/XR introduction in 2018, all devices were compatible across all US carriers.  So the iPhone XS/XR/11/11Pro/11 Pro Max are easy conversions to New T-Mobile (in fact, new activations are likely roaming on some T-Mobile bands already – expect to see roaming changes to incorporate more T-Mobile low-band networks in the near future).  All of the above models would be classified as “Best case” using the designation above.

All is not lost, however, for earlier Apple models.  The iPhone 8/ 8 Plus and iPhone X models that worked on Sprint also had all of the T-Mobile networks except for the 600 MHz spectrum (Band 71).  So iPhone 8 and iPhone X will work really well in the metro areas (and will use T-Mobile’s 700 MHz/ LTE Band 12 if existing device signal degrades and will have T-Mobile’s AWS spectrum for additional data throughput).

It’s important to note that even iPhone SE, 6S/6S Plus and 7/ 7 Plus models that worked on Sprint should have a very smooth transition to the New T-Mobile network.  (And, existing T-Mobile customers also have the benefit of having the Clearwire spectrum already on their devices since the iPhone 6S, so when New T-Mobile augments their spectrum, device performance will improve).

Sprint has not announced what percentage of their base is using Apple smartphones, but, if other carriers are any indicator, it’s in the 4X+% range.  For a little less than half of all Sprint retail customers (and probably 3X% on Boost), the transition should be a breeze.

Samsung Budget Android:  Currently, Sprint retail carries one Samsung budget SKU, the Galaxy A20 (note: they previously carried the Galaxy A10e model and the builds/conclusions are the same for the A10 and A20 series).  This version has both Band 12 and Band 71 and should be easily transitioned to New T-Mobile.  According to the Samsung website, however, this SKU does not have LTE Band 66 so there may be pockets where download improvements are limited.  Also, the Unlocked version of the device (popular at places like Best Buy and B&H) does not have LTE Band 71 (but has LTE Band 66 – confusing).  While we hope we are incorrect, it does not appear that an Unlocked version of the Galaxy A20 will be able to access T-Mobile’s 600 MHz spectrum.  (Note:  Owners of the T-Mobile variant of the Galaxy A20 will be able to access Sprint’s LTE Band 41 out of the gate).

The bottom line for Samsung Budget comes down to these two important questions:

If the answer to these questions are both “yes” then the device’s performance on the New T-Mobile will be improved and no upgrade will be needed (assuming this is not a power user).  If, for example, the device is the 2017 version of the J3, it’s probably worth looking into an upgrade.

LG: Like Samsung, there’s a compatibility split between the premium and budget models.  The following models have all bands and should be fully compatible:

There was not enough information on the LG Stylo 5 but, since it was launched last June, it’s probably safe to assume the Sprint version it has LTE Band 12 and LTE Band 66 (the T-Mobile version has LTE Band 71).

LG has a lot of brand loyalty and their device performance tends to be consistently good.  But LG’s importance in the premium level is diminishing, and the budget device space is becoming crowded.  Motorola has been a leader in the budget segment along with the J (and now A) series from Galaxy.  And companies such as BLU are eager to integrate LTE Band 41 into their new devices.  While Sprint and Boost were important customers for the last decade, in the New T-Mobile world, the future of LG is more uncertain.

Google has had a long-standing policy of making universal devices.  The Pixel 3, 3XL, 3a, 4, and 4XL are all fully compatible and should have an easy migration to the New T-Mobile.  Even the Google 2 and 2XL have LTE Band 66.

Bottom line:  As the chart shows, and as our estimates indicate, the conversion process to New T-Mobile for either Boost or Sprint will be modest.  Approximately 70-80% of all devices will deliver a better LTE experience than prior to the merger (or at least the roaming agreement).  T-Mobile customers will likely enjoy LTE Band 41 quickly as well.  Of the remaining 20-30%, there are universal devices at all price points that can address Android needs.

“Thanks in part to a doubling in iPhone trade-ins versus last year, our retail and online stores set an all-time record and delivered strong double-digit growth in iPhone.”

“So, retail stores did fantastic on iPhone, very strong double-digit growth in iPhone from a year-over-year point of view. And one of the factors that enabled that was … getting to monthly payments on the Apple Card to make it very simple.”

The synchronicity between Card, Care, and iPhone within each store is impressive.  With all of the talk about a smartphone super-cycle, one has to think about the headwind Apple is creating for increased carrier store device sales.

Does this mean that there will be less exclusivity and marketing?  Maybe less exclusivity, but certainly no less marketing.  YouTube TV is now a fixture in the Verizon FiOS lineup, and the Pixel has been a solid seller for Verizon (it’s a very good device, although non-5G). 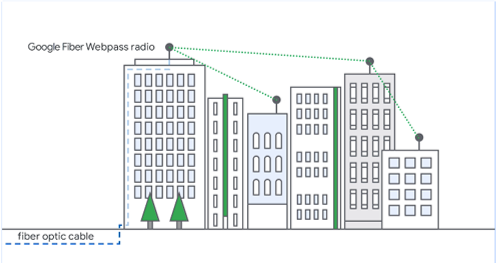 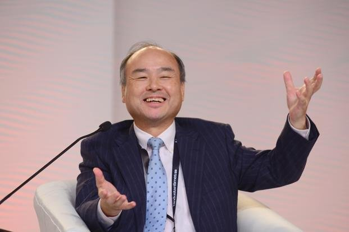 As the saying goes “He who laughs last laughs best.”  This amended agreement will likely result in the return of the 48.8 million shares to Softbank (which will then have a value of $7.3 billion).

There’s another disclosure in the link, however – Softbank agreed to indemnify T-Mobile from all future liabilities above $200 million related to the ongoing LifeLine overcharging investigation and other third-party claims.  T-Mobile and Softbank will share the risk evenly for all amounts up to $200 million.  This eliminates nearly all of the financial “gotchas” that started to surface last September.

Next week, we will dive into the future of the incumbent telco after we hear from Frontier (Feb 25) and quickly check in on Samsung Galaxy S20 sales.  Until then, if you have friends who would like to be on the email distribution, please have them send an email to sundaybrief@gmail.com and we will include them on the list.

One last pic from the CRS 2020 show – I had the privilege of seeing several “up and comers” on the Universal Music Group label including Mickey Guyton singing “What are You Going to Tell Her” at the Ryman Auditorium in Nashville this week.  After several new artists, out came Luke Bryan, then Carrie Underwood, then Keith Urban (who closed his set with a duet with Carrie).  Then the big surprise when Reba McIntire came out and brought the house down.   The closing picture is of the Queen herself (Carrie Underwood looking on behind curtain).  An unbelievable performance. 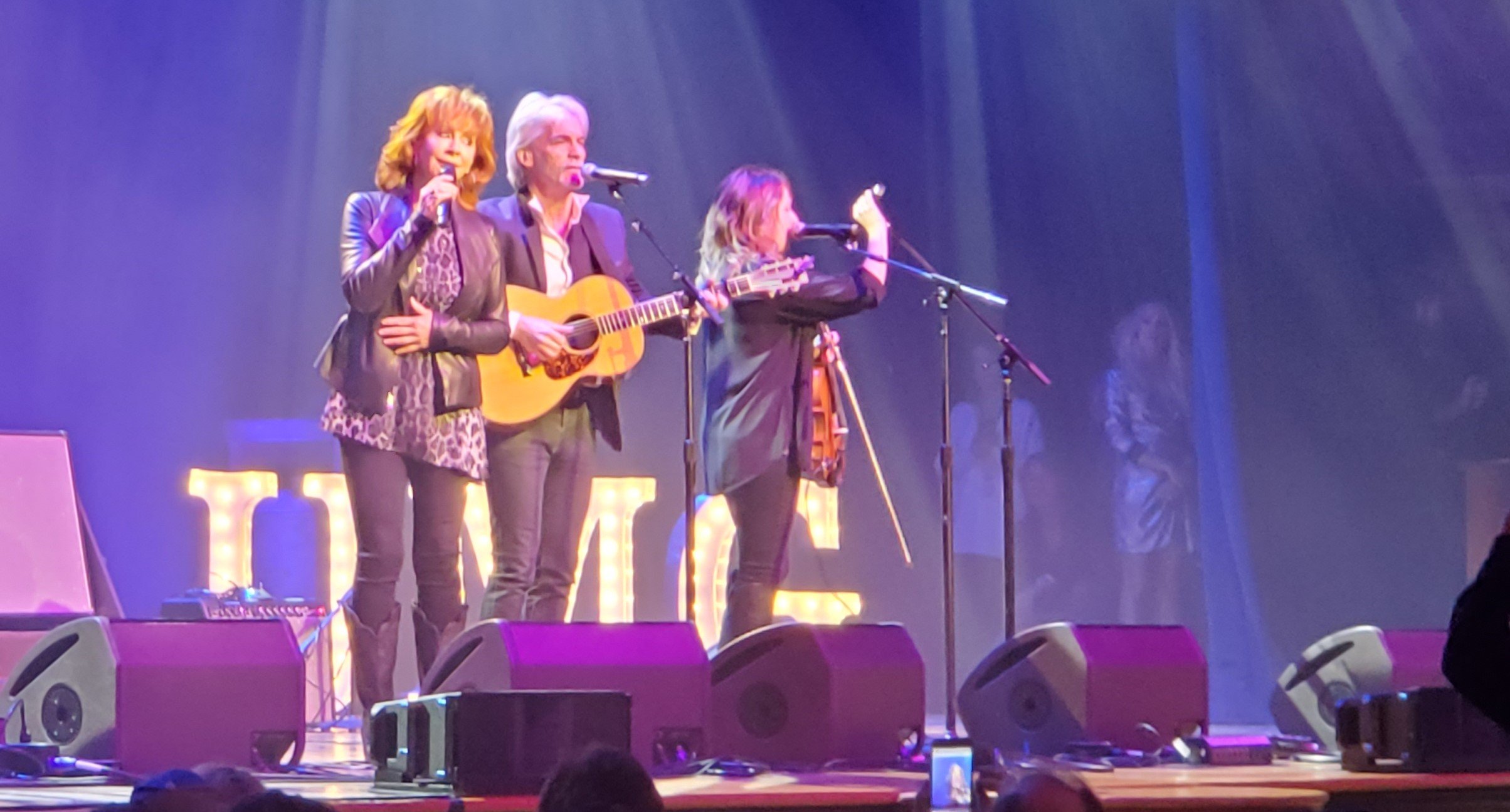