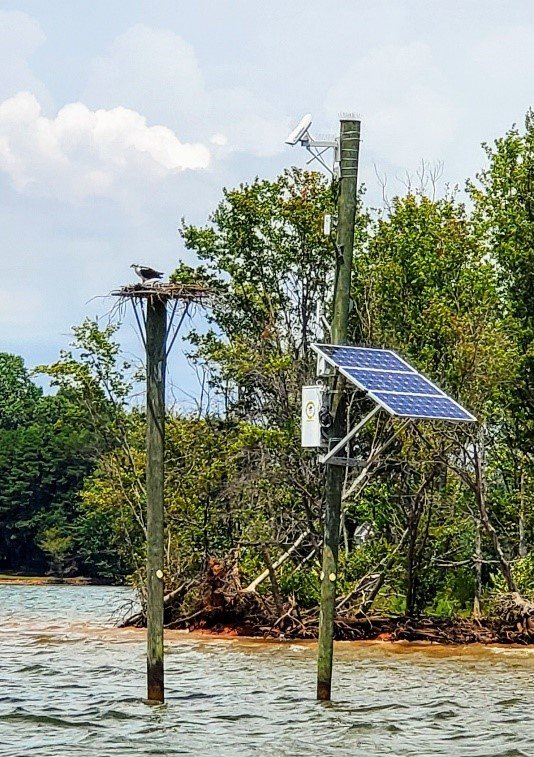 Greetings from Lake Norman, North Carolina, home to one of four Osprey Cams on the Catawba River (and near our home).  More information on this initiative is here from the North Carolina Wildlife Federation.

We have had an overwhelming response to the TSB re-launch over the past three weeks with many new readers, contact information updates, and ideas for future columns.  As of July 21, we are current with requests to be added to the newsletter.  Please keep them coming!

As of Sunday, there was no Deutsche Telekom/ Dish Network/ Department of Justice merger deal, and it appears from recent reporting (CNBC – David Faber) that each party was going to work through the week and likely not extend the deadline past July 29.

While it appears that there is one final issue remaining (Dish change of control and capitalization restrictions following the completion of the Boost/ spectrum deal), it’s important to note that previously negotiated items could come into play as well.  Here’s likely what’s on the table:

There are likely a few more critical items that have been negotiated, but these five sections likely comprise the major part of any deal to be struck between the government, Dish, and Deutsche Telekom.  Move one lever, and another likely will change.  Too much activity, and the deal is likely off the table.

With that as a backdrop, let’s look at the alternatives that Deutsche Telekom, the Department of Justice (along with the FCC), and everyone else are considering. 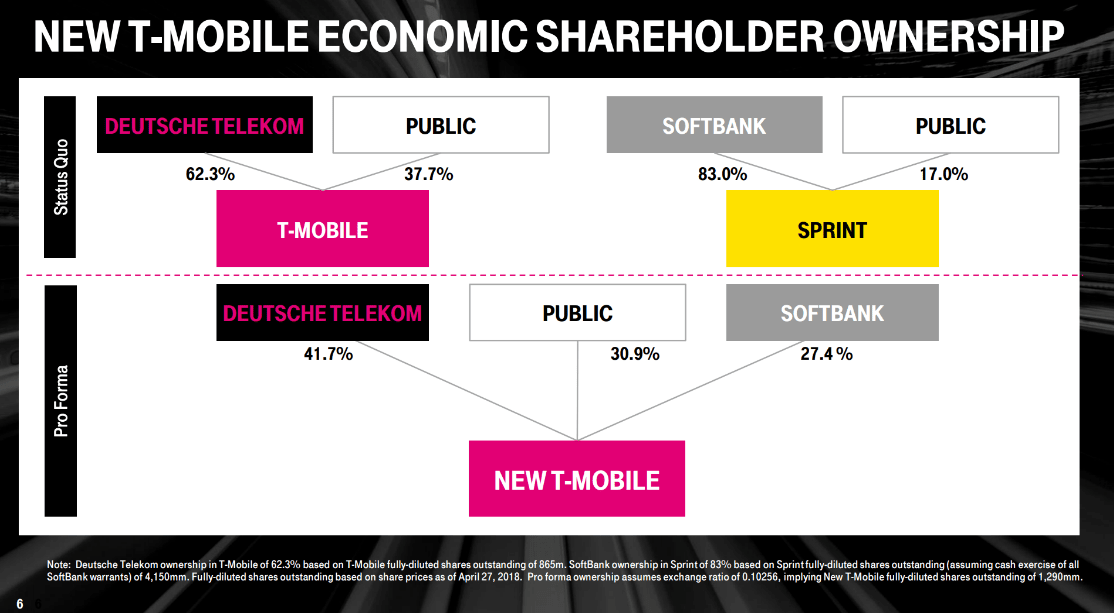 Objective:  Enable T-Mobile USA to have the scale, cash flow and access to capital necessary to effectively compete against Verizon and AT&T.

It’s important to note that Deutsche Telekom’s (DTEGY) market cap is about $79 billion and T-Mobile USA’s (TMUS) market cap is about $66 billion.  Assuming the ownership chart from the merger announcement is correct, around 52% of the German parent company’s value is derived from TMUS.  And, with the parent company value stagnant for the past five years (see chart here), the US subsidiary has been the primary source of increased equity value (around $40 billion in market cap increase in the last five years, of which $25 billion would be attributable to the DTEGY market value).

Here are the two most likely alternatives to a Sprint merger:

Either of these options presents fewer challenges than integrating Sprint into their current operations.  The network migration from Sprint to T-Mobile is much more complex than turning up more 600 MHz capacity in second and third-tier markets and partnering with in-building providers to enable mid-band spectrum for current and future customers.

Bottom line question:  Which is the greater competitive threat, a recapitalized Sprint that could be eventually acquired by a cable or technology company, or Dish + Boost + AWS-3 Spectrum which receives tens of billions of dollars in additional capital from cable, technology and private equity companies?  The answer to this question likely determines what happens this week.

Objective:  Enable long-term competition (defined as four or more robust wireless service providers) by providing as many options for consumers and businesses in as many places as possible.

The general consensus is that the government did the right thing when they blocked the acquisition of T-Mobile by AT&T in 2011 (chronology here and November 2011 Wall Street Journal article here – subscription required).  T-Mobile at that time was on the ropes and headed for the trash heap.  Sprint wasn’t much stronger as they were still saddled by debt from the Nextel merger (specifically the affiliate acquisitions – see last week’s column) and from network upgrades (called Project Vision).  4G (LTE) investments could only be made outside of the most densely populated areas by a few parties (a weak justification for the merger).

While it seems like we are at a similar set of circumstances as 2011, it’s important to consider the following alternatives to approving the Sprint merger (specifically, holding fast to their requirement that anyone can invest any amount in Dish at any time to create a strong fourth wireless option):

1. Auction more (low and mid-band) spectrum faster.  The FCC has both low and mid-band spectrum that they can bring to the table quickly.  They can create rules that allow a large portion to be accumulated by competitive parties, and they can fast track and otherwise encourage Apple, Samsung, and IoT manufacturers to quickly bring modules and devices to market that can use this spectrum within quarters, not years.  The Wall Street Journal has a good spectrum primer here and more on spectrum actions that the FCC is taking as a result of their FAST plan is here. 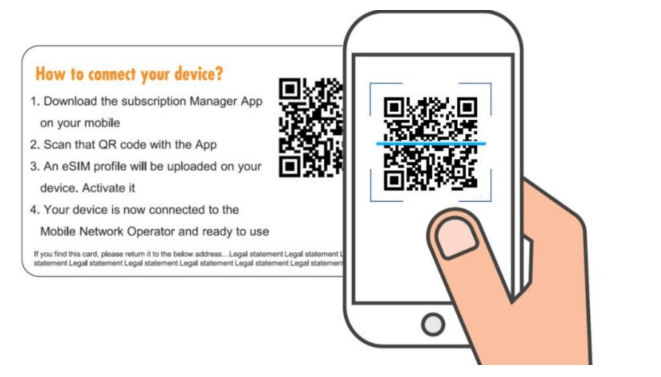 2. Foster and drive the growth of disruptive technologies and processes such as eSIM while regulating phone universality and equipment purchase agreements.  Technically, it’s a combination of dual SIM (more than one choice) + electronic SIM (easy to switch) that is probably required.  This would make it easier to switch from one network (e.g., Verizon’s macro network on the highway) to another (e.g., a secure private LTE network in the office building).  Moving these two changes along would make it easy for prospective customers to try out a T-Mobile MVNO like Ultra Mobile for a week while still keeping the incumbent network as a backup.

Apple and Google Pixel devices are already carrier neutral, but the FCC could do a lot more to make the device certification process easier for low end Android devices, and making those devices capable of carrying the full feature set (e.g., Voice over Wi-Fi for some Verizon or Sprint MVNO customers on certain devices).  Best Buy is leading the way with universal device promotion (which makes perfect sense for a retailer – less Stock Keeping Units or SKUs), but there’s a long way to go with low-end Android devices.

Finally, there are Equipment Installment Purchase (EIP) and leasing plans.  EIP is an 18/24/30-month contract by another name, substituting the legacy post-paid carrier subsidy (which was covered through higher monthly service charges) with monthly equipment installment purchase fees, which may or may not have anything to do with the underlying cost of the smartphone.  The dual + eSIM solution may alleviate some of the EIP pain, but equipment installment plan portability and device universality would do a lot more to stimulate competition than a Dish/ Boost/ AWS-3 solution.

3. Go “nuclear” and adopt the European model for MVNOs.  David Faber, in the CNBC link above, outlines the clear competitive impact this has had on Europe.  The nuclear option would be to mandate new network connection points between wireless carriers and the MVNO community.  This option warrants an entirely separate TSB, but for some reading on how this would work, this white paper is very useful.

Bottom line:  Antitrust lawsuits are but one of many tools governmental agencies have to complete their objectives.  If four is the magic number of networks needed to facilitate a competitive environment, then they need to be more active.  Congress should be a part of this solution as well.

What is Everyone Else Thinking?

Here’s a brief synopsis of what a few of the other important players are thinking:

Hopefully this is all resolved soon.  Until then, it’s decisions, decisions…

Next week, we will publish our annual strategic planning primer.  It’s a must read for anyone who is trying to make sense of the telecommunications industry.