Greetings from Dallas.  As many long-time Sunday Brief readers will remember, in October 2012 the Sunday Brief had a column called “Dear John (Legere)” which talked about the bold radical moves that would be necessary to change fourth-place mentality into innovative market leader (this also started a terrific relationship with John and many of his team).  In that spirit, here’s a letter to Marcelo Claure, the new CEO of Sprint.

Congratulations on your new position!  As one who spent fifteen years at Sprint, first as a manager in Sprint’s local division (now a part of CenturyLink) and leaving as President of Sprint’s Wholesale Services unit five years ago, I have seen the company you now lead from many perspectives.  I witnessed the Sprint PCS buildout, the formation of GlobalOne, the blocked WorldCom merger, the telecom bubble collapse (I was running Access Management while Scott Sullivan at WorldCom was making those access-related accounting entries), Sprint ION, Pivot, Nextel, Cable VoIP, Kindle launch, and Clearwire.  I dutifully served Bill Esrey, Gary Forsee, and Dan Hesse.  I still bleed yellow.

Like you, I co-founded a business to serve the telecom industry.  It was nowhere as successful as Brightstar, but, like you, I sold it to a global telecommunications powerhouse.  I had to meet payroll, pay developers/ lawyers/ advisors, acquire and maintain customers, and raise money during very tough times.  I learned through the process how to make better decisions with less information.  I learned to ask for help, most times for free.  I learned how to cherish time.  Most importantly, I learned how to manage risk rather than eliminate it.  I understand your perspective. 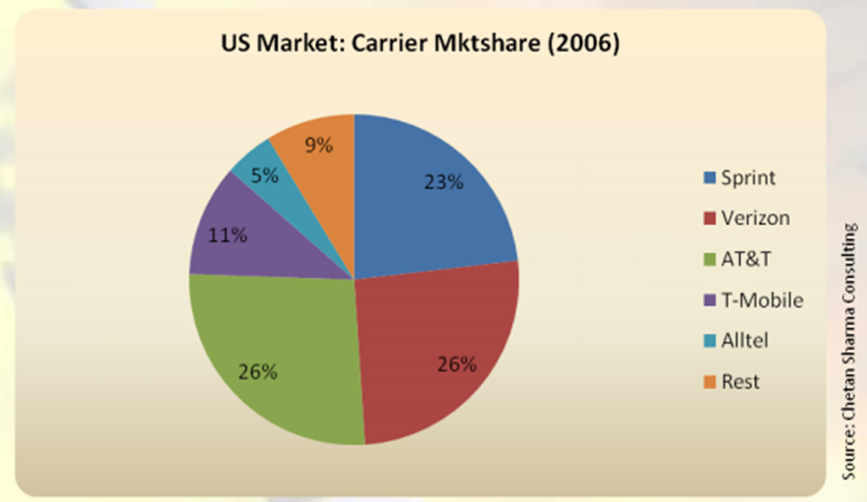 This is a tough time for Sprint.  By all counts (including Friday’s $1.8 billion market capitalization differential), Sprint is a fourth place finisher.  There’s no ribbon for fourth place.

It wasn’t always this way.  At the end of 2006, Sprint Nextel was nearly the same size as AT&T Wireless and Verizon (see Chetan Sharma’s link here – page 12 is most telling).  I am sure you remember those days when you called on Sprint.  They had a first class CDMA data network powered by EVDO-Rev A technology and connected to a Tier 1 IP backbone (AS1239).  The iDEN network, while aging, was practically indispensible to certain business verticals.  The wireline IP network was growing at double digits (42% growth in 2007) and commanding equal headlines with wireless.  Sprint was known for network quality and pioneered innovations in M2M (DriveCam/ Lytx, CardioNet, Kindle).  The world was their oyster.  What happened?

Understanding the legacy of Sprint is critical to understanding its cure.  Here’s my perspective on where things went wrong and how you can right the ship – quickly.

First, it’s important to see the success of wireless as coexistent with wireline networks.  Many at Sprint, including your predecessor, saw wireline as a competitive network and not as an enabler.  This was right for voice (and wireless substitution figures prove this out), but it’s wrong for data, especially business applications such as M2M.

Sprint needs strong wireline partnerships to be successful.  They have not owned local connectivity (direct into buildings) since the spinoff of Sprint’s Local Division (Embarq).  As a result, a lot of expertise related to connecting to buildings (specifically authorization agreements), riser rights, and the like are missing.  Sprint is still conflicted between “offload it to Wi-Fi” (which supplesses incremental revenue opportunities) and “power up” existing macro and other sites.  Neither is a competitive solution for the 80,000-90,000 buildings that make up 12-15 billion square feet of 2.5 GHz unfriendly office space.

The initiative pays for itself with rejuveated wireless business revenues.  Stop going after the small business customer segment on a national basis  – cover the 80-90K buildings in metro areas that matter and use that as the first proof point of a superior network.

Second (and related), make peace with cable (before T-Mobile does).  It’s not OK to have the relationship in its current tattered state.  Current Verizon FiOS offers (see here) and AT&T’s Project VIP (especially with DirecTV) are going to quickly eat into cable’s High Speed Internet gains.  They need a wireless partner.  And the third time in the past decade might be the charm. 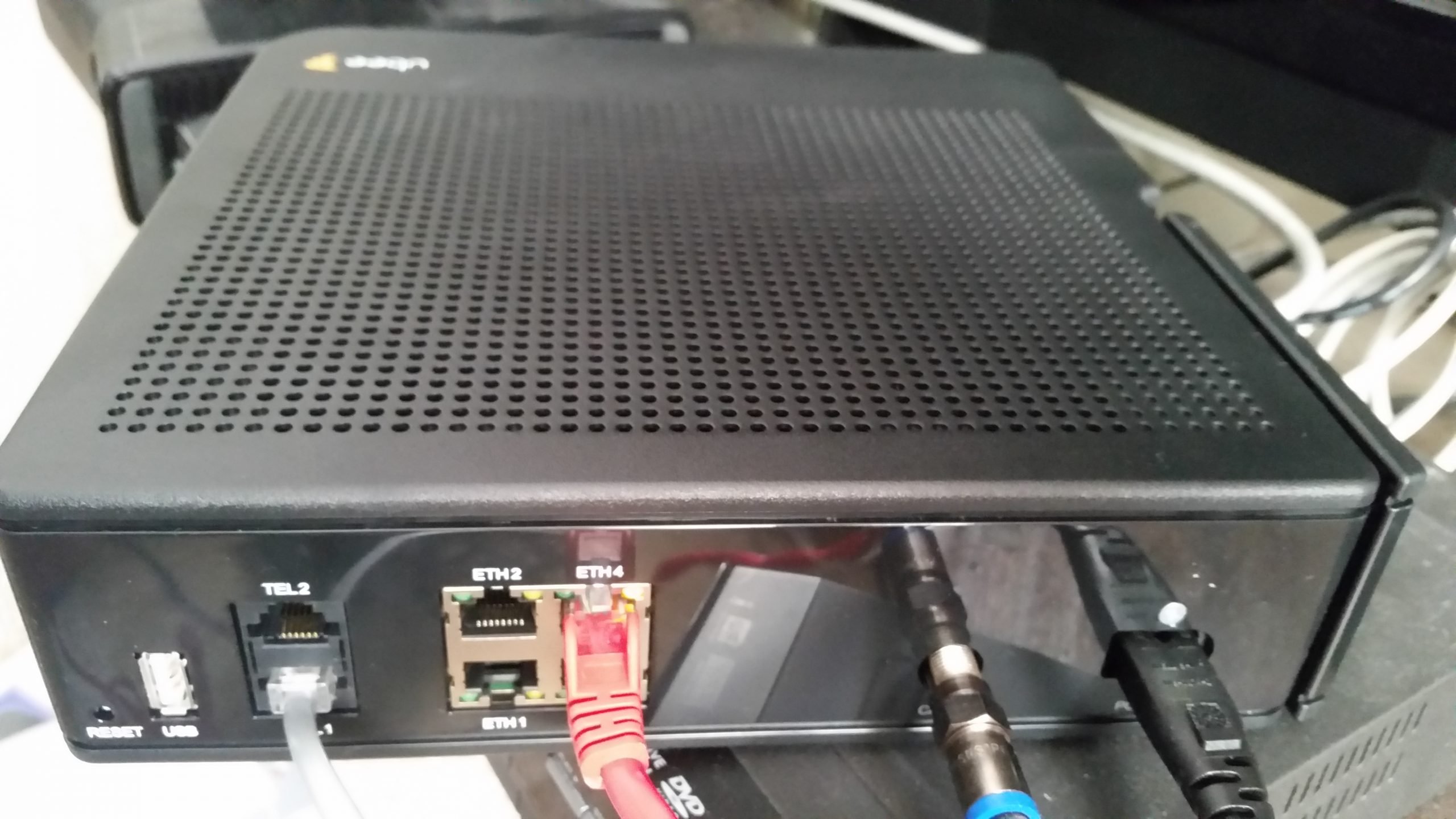 Here’s a picture of the back of my ETMA (cable modem + phone service).  It’s powered, has battery backup, and generates 30GB of data on average per month (its an older modem with average speeds of 50 Mbps).  As you can see, it happeneds to have a USB port at the back.  What could Sprint do to with cable to generate improved coverage from that USB port?  I bet engineering teams could figure something out that enables whole home coverage pretty quickly.   As you probably saw from last week’s Sunday Brief, cable continues to grow their relative share vs. telco incumbents.  Both are growing, but cable is growing faster – a lot faster.

There’s a lot of emotion around the cable issue as a result of Clearwire and the loss of hundreds of millions of cable VoIP revenues (there’s a good story about the Time Warner Cable negotiaiton process we should discuss).  As a new CEO, you have the ability to reset the agenda.  Make cable an integral part of Sprint’s partnership strategy.  If you don’t do it, and T-Mobile does, it’s unlikely you will ever to get back to “ribbon status.”

Third, measure your team through the customer experience, not some arbitrary and capricious budget metric.  Vision was an important project, but covering 245 million with LTE means nothing if customers cannot get adequate coverage in the St. Louis/ Denver/ LaGuardia / DFW or Dallas Love Field airports (measure the difference between Sprint’s and AT&T’s data performance in these airports – it’s in multiples, not percents, and outright astounding).  Stop focusing on average, and start focusing on the 95th percentile.  Specifically, be able to make the statement “Ninety-five percent of our customers receive a text message within one second from the time we receive it” or “Ninety-five percent of our customers receive 10 Mbps (or greater) downstream speeds throughout the day.”  These measures exist for voice (dropped/ blocked calls), but not for SMS or data.

These are promises that focus Sprint on end-to-end experiences.  How robust are Sprint’s connections to Pandora (or Spotify or Rhapsody or LastFM)?  What if Sprint stored the most frequently needed Rhapsody + Spotify + Pandora music catalogs at major cell sites (it would probably require storage the size of the previously pictured EMTA for each of them)?  What about other commonly cached content, like YouTube/ Vimeo/ Netflix?  What about Content Delivery Network servers for Akamai, Limelight, Level3 and others?

Sprint’s nework delivery is falling behind the competition.   Measure it and fix it.  Then watch churn improve and ARPUs rise.

Finally, institutionalize the assumption throughout Sprint that the innovative solutions needed to produce sustainable competitive advantage will not come from Cisco, Microsoft, Ericsson, Alcatel-Lucent, or Nokia Siemens Networks.  Too many times, large carriers actively discourage trying new companies.  That has largely been Sprint’s practice, but not Sprint’s historical tradition.  For example, when Sprint was pioneering network advances in the 1990s (and carrying as much as two-thirds of the global Internet backbone), Sprint enabled companies like Fore Systems (sold to Marconi in 1999), Cerent (sold to Cisco in 1999), and Ciena.  I could not imagine asking Sprint’s network organization to be the first purchaser from three VC-backed startups today.  (Note:  US Robotics, 3Com example).

Devote 10-20% of incremental 2015 spending to companies that have been in business less than five years.  Create a culture where the “play it safe” mantra results in lower evaluations and fewer promotions.  You might be able to regain third place by playing it safe, but a second or first place finish involves a reputation for technical innovation not seen from Sprint in over a decade.

Localize everything except the culture of innovation.  Partner with cable partners who are natural enemies of AT&T and Verizon to secure long-lasting competitive advantage (and hobble T-Mobile in the process).  Measure the customer experience and honestly assess the inconsistencies of Sprint’s current data network.  Be known as the first company innovators should turn to for sponsorship, validation and feedback.  These are the foundations on which to build a broad-based recovery and set the standard for which all other companies are measured.

Best of luck to you, Marcelo.

Your friends at The Sunday Brief

More insights to follow Monday morning on Bloomberg television (approximately 9:10 ET).  For those of you who will be unable to watch, a copy of the segment will be posted to www.sundaybrief.com on Monday afternoon.

Next week, The Sunday Brief turns five years old.  This will be a very special edition on the future of telecommunications.  If you have friends who would like to be added to The Sunday Brief, please have them drop a quick note to sundaybrief@gmail.com and we’ll subscribe them as soon as we can (and they can go to www.sundaybrief.com for the full archive).