Cortana Becomes the Voice of Microsoft 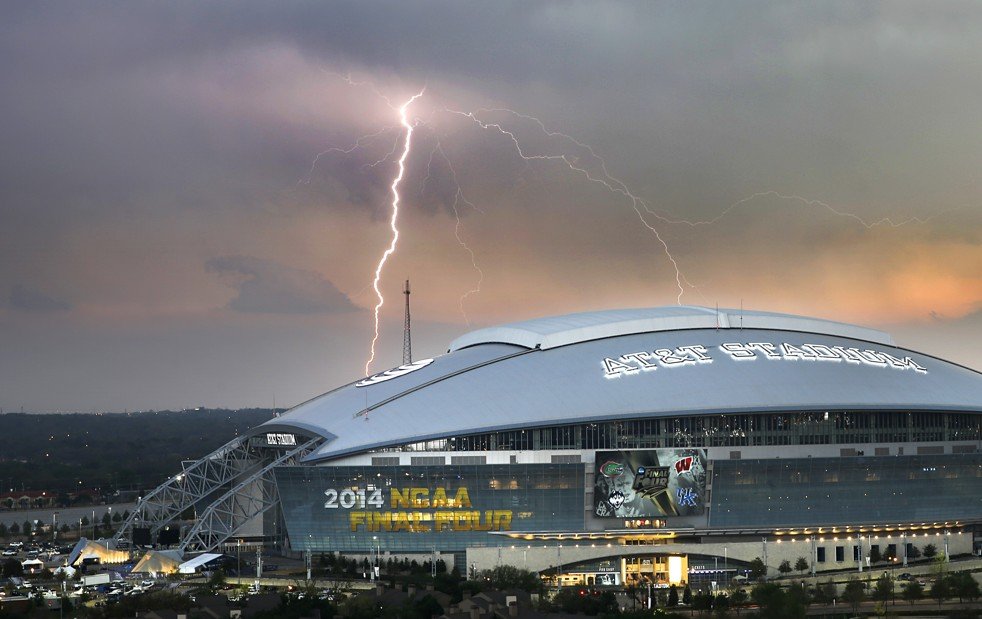 Bracket-busting Final Four greetings from Austin and Dallas, Texas.  To call it anything other than madness would certainly be an understatement.  2014 will certainly be knows as the year of the underdogs.  While the tourney (and the opening of the baseball season) grabbed a lot of sports headlines this week, there are plenty of great things to highlight in the telecommunications and Internet worlds. 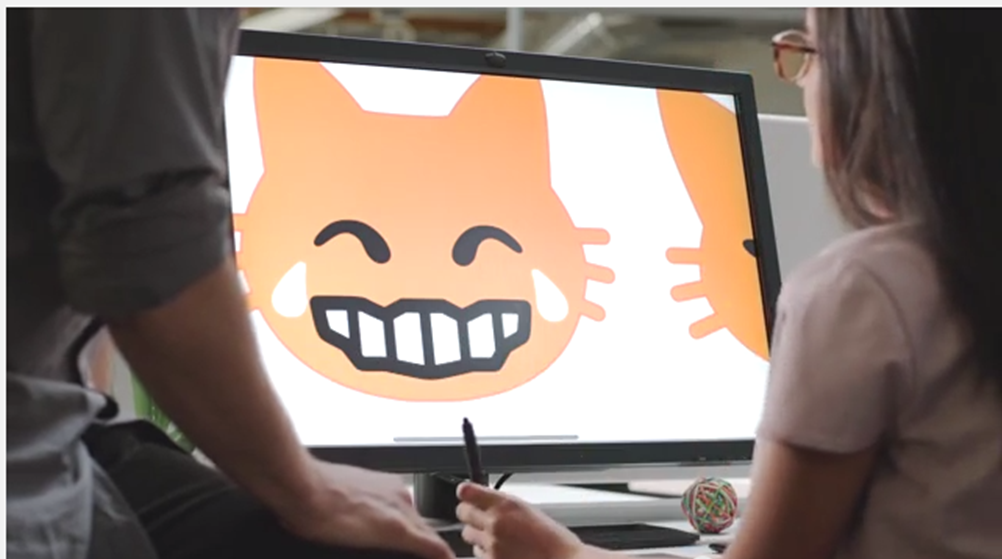 You cannot go too far into the headlines this week without covering some of the most creative April Fool’s Day pranks ever played.  First, there’s Google with their emoji translation feature, complete with the “I am laughing so hard I’m crying, and I’m a cat” emoji (pictured).  There’s also a hilarious “You Tube Viral Video Trends 2014” video which introduces many new memes including “clocking” and “bun-nutting.”  Tech humor, for sure.

Next, the folks from Airbnb formed a new product called Airbrb (“be right back”) that allows folks to rent out their office/ cube/ desk for a few hours (there is a bosses’ office for rent in the video – wonder what mine could have gone for at Sprint?).  I have a feeling there’s a bona fide idea here waiting to break through, but first I need to get my home office cleaned.

Finally, in the subtle and therefore most effective category, there’s the folks at Toshiba (not to be confused with the folks at Fujitsu who got a lot of headlines at this year’s Consumer Electronics Show for their sensor-equipped gloves prototype).  They came out with their new DiGiT product line.  It even begins with a quote from famous philosopher Unknown, who said “He who has technology at his fingertips holds the world in his hands.”  Toshiba, you get my vote for content.  (More here from the DiGiT website).  I wonder how many people clicked on the “Sign Me Up” button…

On a more serious note, we have been tracking the pricing changes occurring in the wireless industry, and this week, Verizon joined the “4 lines for $160” party, matching AT&T’s offer to the penny (see full details from Verizon Wireless’ webpage here).  Some analysts (The Sunday Brief included) read this more as a “Why fight it?” gross addition play versus a “Must respond” net addition maneuver.

It’s important to note that Verizon’s 4Q 2013 Average Revenue Per Account (ARPA) is $157.21 with 2.76 retail postpaid connections per account (roughly $57/ subscription).  This compares to $64 at Sprint and $66 at AT&T.  Each of these figures largely reflects the traditional model of large subsidies offset by higher monthly charges (the subsidization effect on ARPU is $15-19 monthly on a 2-yr contract).  If Verizon can attract families at an $160 ARPA before subsidies (to get this rate, customers need to be on the Verizon Edge plan), their overall metrics will actually improve, not deteriorate. 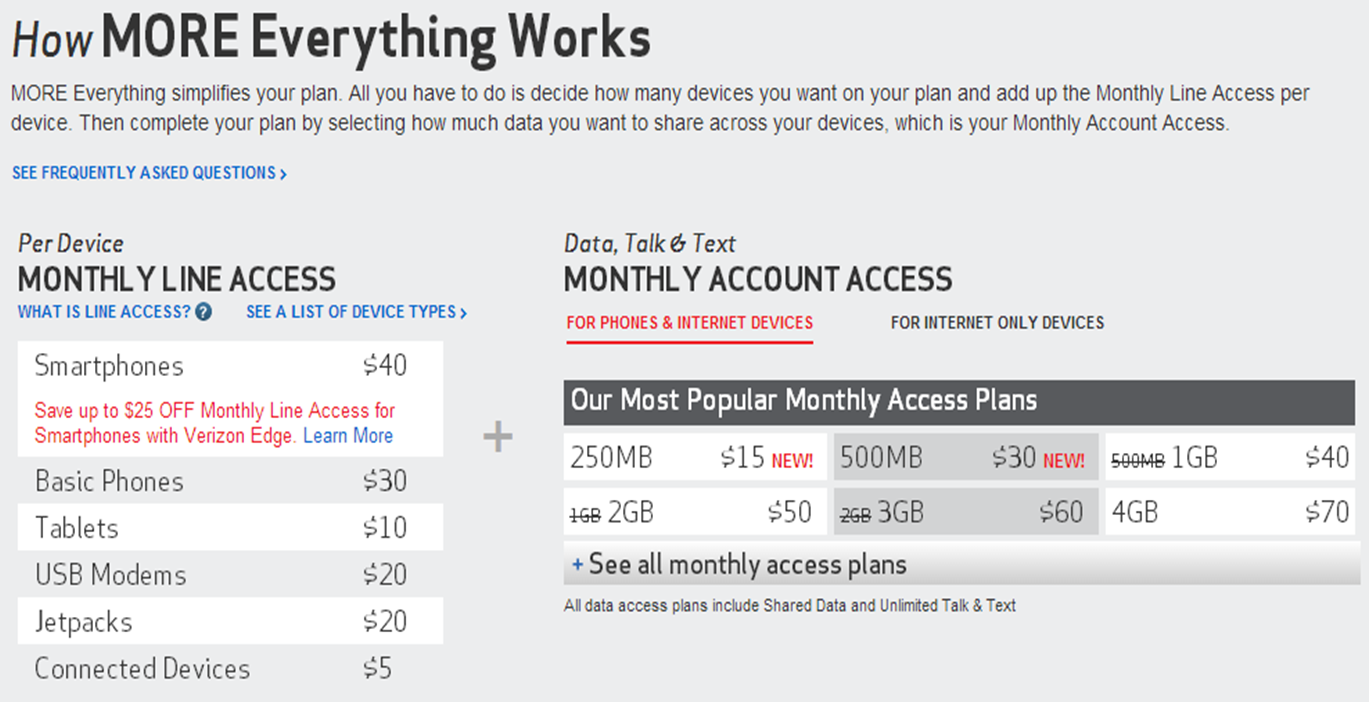 That’s not all Verizon did this week to mirror AT&T’s offers.  For lighter data users, Verizon now has 250MB and 500MB shared products (see full chart below).  Interestingly, the 250MB and 500MB straddle AT&T’s 300MB offer ($20 for data and $25 for unlimited voice and text = $45 total cost).  For $45, Verizon offers 200MB more data.  At the 1GB tier, however, AT&T’s pricing is better ($50 vs $55 for Verizon).  These are subtle changes aimed at voice and text-centric subscribers who have not formed a wireless habit yet (and neither  download any files included with their emails nor have DropBox).

On a slightly different course, Verizon rolled out a BOGO (Buy One, Get One free) offer on the upcoming Samsung Galaxy S5, the HTC One (M8) that we profiled in last week’s Sunday Brief, and the Samsung ATIV (Windows 8).  Interestingly, none of the DROID devices, and specifically the Maxx gets the BOGO offer.  Don’t know if we can read anything into this yet, but the omission of DROID has not gone unnoticed.

To get the BOGO offer, customers need to stay on a traditional Verizon MORE everything plan (up to $25/ month more).  It’s a slightly better proposition to forego the BOGO offer using two Samsung Galaxy S5s as an example ($21 savings per month in handset subsidy vs. $25 in MRC savings from using Verizon Edge for two lines), but it’s a bold move to put a pre-order phone on sale with a BOGO promotion.

Bottom line:  Verizon has shored up their low-end and family plan pricing to match AT&T.  In the process, they have bested Sprint’s Framily plan for two lines ($100 for 2 lines with 2GB of data and no sharing).  Expect the collateral damage to be at Sprint, not AT&T.

Cortana Becomes the Voice of Microsoft 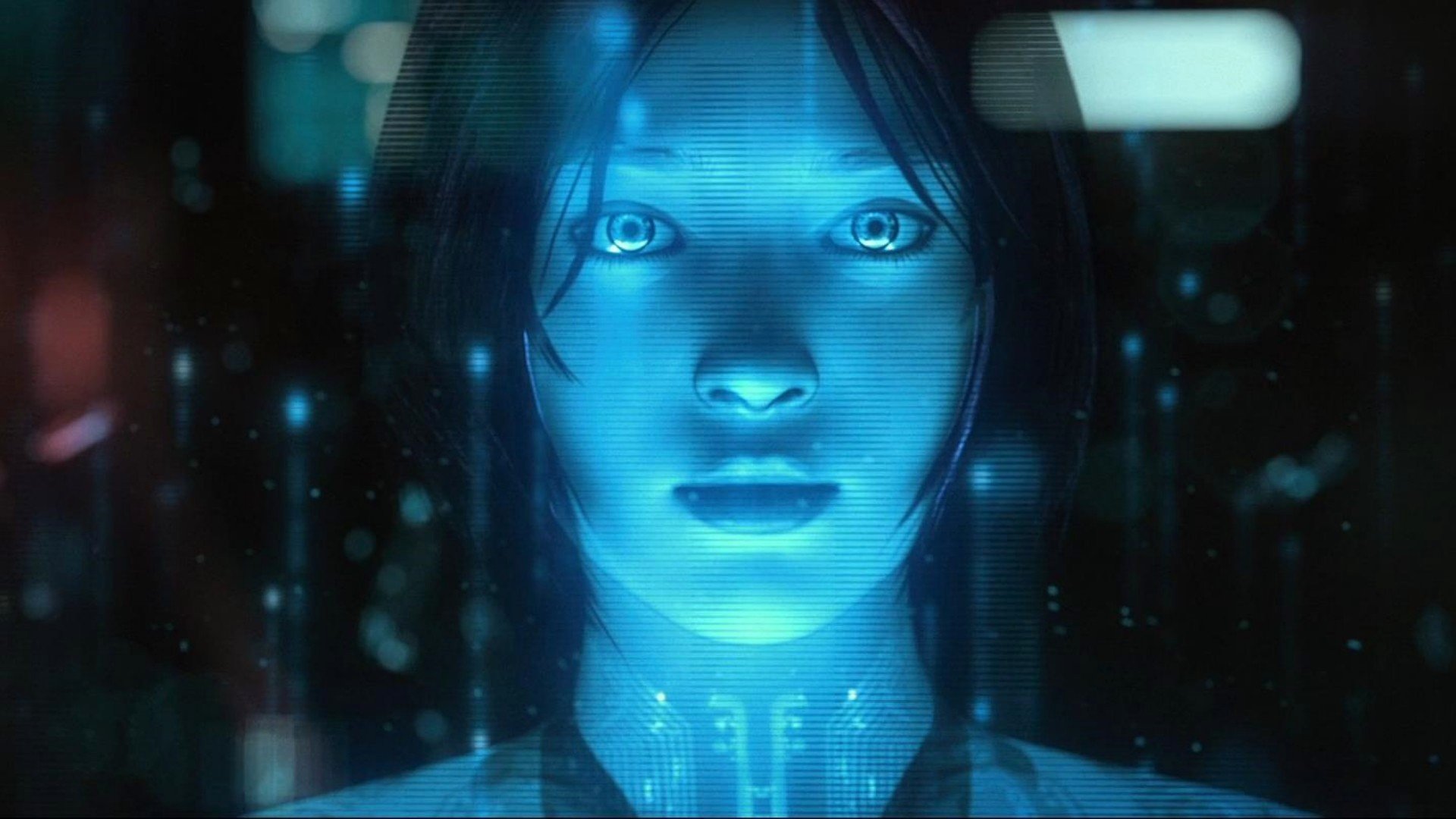 One of the key gaps in Microsoft’s Windows mobile product portfolio is digital organization.  Apple led with Siri, and Google has their ever-improving Google Now platform.  Voice recognition is an essential element of all smartphone operating systems.

This week, Microsoft took a character from Halo, a video game exclusive to the Xbox gaming platform, and named their digital assistant Cortana.  Doing this is not just clever, it’s downright brilliant.

First, unlike Siri and Google Now, Cortana can be visualized.  She is sexy and attractive.  She has a shared history (if you are a Halo player), and her reputation is to inform and protect.  To many gamers, she is almost human.

Why would Microsoft choose Cortana?  Instant recognition to tens of millions of Halo players across the globe.  If you have a Windows 8.1 phone, and you use Cortana, that makes you the Master Chief (John-117).  Just the allure of mixing virtual and physical communications worlds is extremely intriguing to many who do not see smartphone advances as particularly exciting.

On top of the direct association with tens of millions of Halo users, however, Cortana will appeal to smartphone users who want to put a face with a name.  Microsoft is going to use Jen Taylor as the voice of Cortana whenever possible, and use Jen in various promotional venues.

One of the key features of Cortana is choice and privacy.  Several reviews of the service mention the same thing – the ability to guide Cortana, remove or add items, and ignore – makes it a far better experience than Siri or Google Now.  While the ability to learn over time has not been fully tested, the user interface and the directed choices available make Cortana a reason to consider switching.  From the review of Cortana in The Verge comes the best bottom line opportunity summary:

Microsoft has seen what Apple and Google have done, wrapping some of the best ideas from Siri and Google Now into one attractive, easy-to-use interface — but now, the real trick will be to leverage Xbox, Windows, and Microsoft’s other products to get Cortana everywhere. The Bing home page will be updated in the coming weeks with notifications and information displayed in Live Tiles, personalized for each user, perhaps a small sign of things to come. The company has an always-on microphone in millions of houses through Kinect, hundreds of millions of computers running Windows, and a healthy new attitude toward iOS. For now, Cortana lives in your pocket, but her voice might soon be everywhere.

Well, we ran out of time to do a good Wearables analysis justice.  Barring any major headlines next week, we’ll take a look at the evolution of smart attachables and talk about the role of Samsung, Google, Microsoft and Apple in the developing ecosphere.

Also, thanks for the many visitors to the  www.sundaybrief.com.  We set a record for number of unique visitors last month (still in the hundreds, but we had visitors from 10 countries), and had our second highest number of page views (in the thousands).  As always, if you have friends who would like to be added to The Sunday Brief, please have them drop a quick note to sundaybrief@gmail.com and we’ll subscribe them as soon as we can (and they can go to www.sundaybrief.com for the full archive).