Late January greetings from Charlotte, where one of the start-ups I am advising, Lucid Drone Technologies, won two awards this week (pictured are the happy founders David Danielson, Andrew Ashur, and Adrian Mayans). The Charlotte Inno Fire award includes a red blazer which Adrian is wearing.  For more on what Lucid does, check out this YouTube video.  They will be demonstrating their capabilities in Atlanta this week, so keep your eyes to the skies if you are in the Big Peach (especially downtown)!

This week, we will do our best not to over-extrapolate Comcast’s quarterly earnings announcement.  The Philadelphia-headquartered global media and infrastructure giant exceeded on nearly every front, confirming that consumer spending is strong and broadband competition isn’t.   We also have a large number of TSB Follow-Ups thanks to articles and notes that you sent in (we appreciate and read every one!).

One reminder for the Denver TSB faithful – I’ll be keynoting the 5th Annual Colorado Wireless Association Education Conference a week from Wednesday (February 5th).  It’s a full day of panels, speakers, and networking.  More on the conference here.

Before diving into Comcast’s earnings, one erratum:  We incorrectly attributed the “Let them compete” quote last week to the T-Mobile defense team and were reminded by an advisor to that team that the quote should be attributed to Mr. Glenn Pomerantz who represented the 13 Attorneys General.  My apologies to both Glenn and David Gelfand.

In earnings season, it’s hard to go first because there are no other company comparisons.  And it’s always hard to live up to expectations when, at a highly publicized event a week prior to the announcement, your chairman touts a “record year and an exceptional fourth quarter.”  How did Comcast do?  Here’s a brief summary of their customer metrics, courtesy of their news release:

The most striking aspect of the nearby schedule is that 97% (342/352) of residential customer fourth quarter relationship growth is coming from single product customers, and the predominant new revenue generating unit (RGU) is high speed internet (HSI).  In the year ago quarter, 37% of net new customer relationships came from double or triple play bundles– that number is now 3%.  And, for all of 2019, Comcast, even with their innovative X1 set top box, lost 3% of their customer base, roughly double the rate of 2018.

It’s also important to note that this slowing growth is occurring as new home construction is picking up (Denver, Houston, south Florida, and Atlanta are all growing faster than the rest of the country).  In their cable customer metrics disclosure, Comcast indicated that their new homes and businesses passed grew by 181K in 4Q and 904K for all 2019, up from 136K and 565K for 2018 and 791K for 2017.  They are still grabbing share (and arguably the foundational HSI relationship) as shown by net additions of 1.4 million Internet customers, but the incremental revenue per new residential relationship is down – significantly – versus 2018.  Peacock cannot come soon enough.

What is surprising is the continued strength in Comcast Business (revenues +8.8% 4Q 2019 vs. 4Q 2018) and the iPhone-driven growth in wireless (+261K net additions).  The commercial services business unit is now chugging along at an $8 billion annual run rate across 2.4 million customers (roughly $280 monthly ARPU per customer), with roughly 55% of them taking voice and 40% of them taking video.  The vast majority of customers are still on the “small” or “very small” side of SMB, which makes them prime wireless targets (with the exception of T-Mobile, the remaining wireless carriers have struggled for decades to effectively manage the needs of multi-line small business customers).  Just a 10% penetration of the existing business base would help immensely, and the product line (including data usage distribution) for small business customers is slightly favorable to family usage (fewer high-bandwidth users as a percentage of the total business base).

This leads us to wireless.  Nearby is a chart showing actual net additions for Comcast

and our estimate for Charter/ Spectrum (we tend to be less optimistic than others about Spectrum’s performance in the quarter, although we do think that they will slightly outpace Comcast’s performance).  Assuming our estimates for Spectrum are correct, they will have achieved ~ 7% more net additions in the first six quarters of operation than Comcast.

Comcast’s wireless unit had an EBITDA loss of $116 million for the quarter (4Q 2018 comparable figure was $191 million) and $401 million for the year (2018 = $743 million).  While these are certainly an improvement, each customer is still, on average, losing $20/ mo. (4Q 2018 was ~$56/ mo.).  And, most importantly, we estimate that slightly less than half of their 2.052 million ending subscriber base is on their profitable “by the Gig” plans.  If our estimates are correct, then ~1.1 million unlimited customers are still breaking even or slightly losing money at the gross margin level (meaning that data volume increases are outpacing voice and data rate declines).   Offload solutions (CBRS, more Wi-Fi options, etc.) and core control cannot come soon enough, and adding Peacock streaming to a large subset of unlimited wireless (5G?) customers in a few months is going to create additional bandwidth requirements and EBITDA pressure.

“In wireless… the keys there are a little bit of maturity. We talked about the reasons why we’re doing it. We’re real pleased with broadband retention. The area that’s beginning to pick up that we’re really pleased that we wanted to focus on is just growing consideration using wireless because I think it does help broadband. But getting people into retail stores, they didn’t really think about doing that before, beginning to see real traction in retail. Most certainly, when you see a solid product introduction, like Apple, that they had, and other wireless devices, I think we benefit. We’re in a good position for Bring Your Own Device. I think we’re uniquely positioned in the ability to have a combination of unlimited and by-the-gig pricing. So you add all those things up, and we’re really pleased with our overall wireless momentum as well.”

Brian Roberts later commented that this quarter’s performance “shows we can get some scale.” All of these comments are true, and we have to be careful about any further extrapolation, other than to say that there will be great relief when an Apple launch quarter is accompanied by positive EBITDA and wireless can stand on its own attributes and not be dependent on being a churn-reducer or brand-builder.

Bottom line:  Comcast has the best High Speed Internet product (and in most locations, value) in the US, and it’s only going to get better in 2020.  Despite increased fiber competition, they are holding their own and establishing a stronger foothold in the residential and SMB markets.  Slowly, cable revenues are beginning to concentrate as viewing habits shift away from the set-top box.  Stand-alone 5G is coming, which will lower the cost to enter the wireless market as a facilities-based provider (and unleash a new home broadband competitor).  Wireless results will continue to improve, but there’s the lingering issue of addressing the profitability of unlimited Xfinity Mobile subscribers.

Given the bevy of upcoming earnings releases (which are going to take up all of next week’s TSB), we thought we would go ahead and address five this week.  Here they are (in no particular order):

Verizon is seeing something in their 4Q numbers which is driving this decision.  We’re sure that they will talk about it more on their earnings call, but this could be as much about improving their cross-product rewards proposition as it is about responding to the Apple Card (we doubt that this is the case – it’s all about Apple).   As we discussed in the original TSB concerning the Apple Card (see here), there’re a lot of things that can be combined with consumer credit which can be very attractive, and top line discounts do not need to be front and center to make it more attractive (in fact, if “5% off your bill for signing up for the Verizon Card” is the headline, it’ll pressure profitability just like the Southwestern Bell fiasco 24 years prior).

No doubt, a credit card option will make family switching/ 5G adoption easier and strengthen the customer relationship (versus a Verizon month-to-month contract with Apple or Samsung financing the device).  Our guess is that the mix of BYOD upgrades and gross additions spiked at Verizon with the iPhone 11 launch.  More details after we look at equipment revenues in their earnings release on Thursday.

The company entered last August with a share price below $4, caught up in the Windstream/ Frontier valuation downdraft.  As of Friday, they had recaptured all of the 2019 losses but the share price still isn’t back to 2018 levels.  This is not a story of acquisition windfall, but rather a reward for management investment discipline and operational perseverance through the storms of financial uncertainty that plagued many of their peers.  Kudos to Leigh Fox, Andy Kaiser and the rest of the management team. 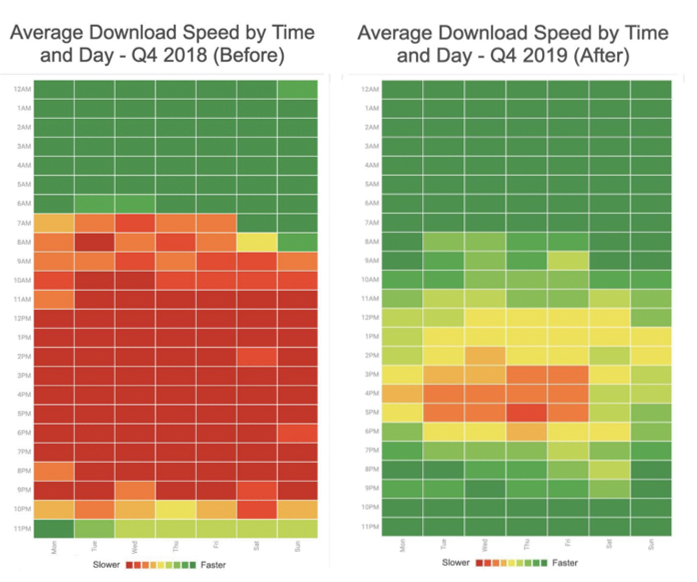 While not eliminating capacity issues (there’s still some orange and red times throughout the week), the impact of AT&T’s latest efforts is significant.  With data growing at 30-40% this year, we expect this is not a “set and forget” event for AT&T, and can only wonder what the before and after pictures will look like for both Sprint’s and T-Mobile’s networks if their merger is approved.

That’s it for this week.  Next week, we’ll comb through Verizon, AT&T, Charter and other earnings releases in what promises to be a super TSB issue.  Until then, if you have friends who would like to be on the email distribution, please have them send an email to sundaybrief@gmail.com and we will include them on the list.

Have a great week – and GO CHIEFS!