Comcast Moves On to Another Battle, But is Still Best Positioned to Win the War

Greetings from Pairs and Dallas.  This week was already overflowing with earnings news (we will cover AT&T and Verizon earnings in great detail next week), when Bloomberg broke the story Thursday of the likely Comcast/ Time Warner Cable merger demise.  CNBC confirmed this rumor on Friday morning, and a few hours later Comcast CEO Brian Roberts went on the CNBC Squawk Box set to confirm that the merger was off (full interview here). 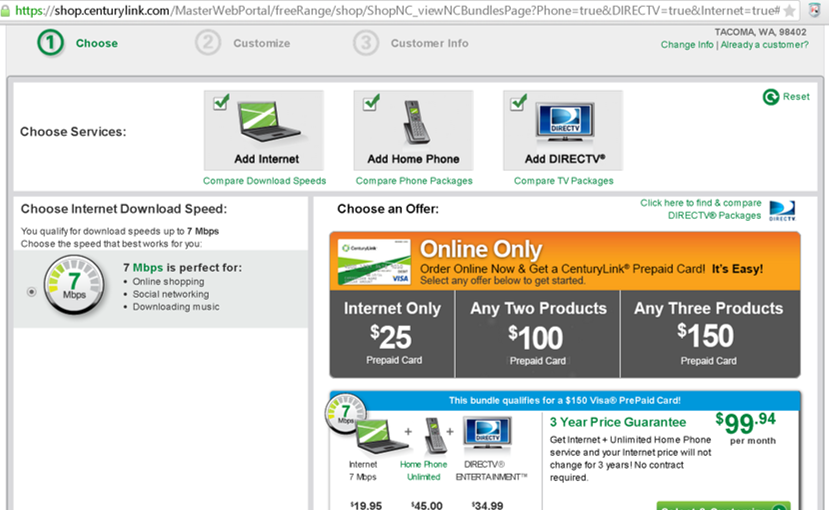 Several dozen of you asked me for my thoughts on these events.  Well, a sense of merger danger started on February 4 when the FCC redefined what the new broadband standard should be (it is now 25 Mbps – see ruling here).  This rule change served two purposes: 1) for companies like Comcast, it increased their broadband market share because they were the only company offering 25 Mbps or higher service in many areas, and 2) companies like CenturyLink (in Tacoma, Washington, for example) were not counted as a broadband provider because they did (and do) not offer residential broadband speeds above 25 Mbps in many parts of their service area (for the Jim Patterson in Tacoma, Washington, used in the example shown, his max speed is 7Mbps, perfect for “online shopping, social networking, and downloading music.”  No other speed choices are offered by CenturyLink.  Comcast Xfinity offers for the same address reached 150 Mbps).  There are hundreds of these examples across the Comcast footprint where they have been a victim of their own success.

This redefinition allowed the media a clear way to highlight Comcast’s (either stand-alone or combined with Time Warner Cable) broadband dominance (see Ars Technica article here).  Forget the fact that AT&T has just finished a substantial upgrade of their plant (which now covers 57 million homes at speeds up to 75 Mbps, according to their recent earnings call) and is rolling out 1 Gigabit per second speeds in seventeen markets.  On top of this, wireless broadband speeds are also continuing to increase (some analysts, including those of us at the Sunday Brief, contend that the change from 10 to 25 Mbps was partially chosen to eliminate LTE as an alternative broadband standard).  Regardless, the sound byte was clear: 57% of the broadband circuits would be held by one company, and that was too much for the FCC to stomach.  Suing to block the merger will do nothing to increase broadband penetration.

Second, the states of California and New York became actively involved in the decision.  We wrote about this in a March Sunday Brief entitled “Did California Kill the Comcast/ Time Warner Cable Merger?”   On February 13, Comcast and Time Warner Cable received an early “Valentine” from the California PUC approving the merger with significant conditions.  (In April, one of the five Commissioners, Mike Florio, went so far as to submit a competing 89-page proposal to his fellow commissioners blocking the merger).  While it is likely that Comcast could have resolved its differences through the arbitration process (and picked up Los Angeles as a result), the question of precedence loomed.

As California flexed its regulatory muscle, New York State consistently developed a “wait and see” mode, delaying a decision on the merger six times (most recently April 20).  In many previous mergers, the states followed the leads of the DOJ and FCC.  California decided to break with that tradition, and New York State was positioning itself as the last approval required (and hopefully to get the last concessions).

Finally, there was the Open Internet ruling itself.  From the President’s unprecedented move of publicly weighing in on his desires in November 2014 (see YouTube address here), to the accusations by Commissioner Pai of continued “editing” of the actual Report and Order after the FCC Vote had been taken (see page 4 of his written testimony here), any future procedure seemed to be subject to the approval of multiple (and historically new) parties.  The meaning of “(un)just and (un)reasonable” will play out in the coming quarters as the FCC rewards industry laggards with an easier approval process.

In hindsight, the path to a federal blockade of the merger was fairly clear:  a) redefine the market to redefine market dominance; b) engage key states to coordinate opposition, and c) elongate the approval process through additional rulemaking which creates the aura that either/ both of the merging parties cannot be trusted.  It makes us wonder what can be approved over the next several years.

What Comcast Should Do Next

Brian Roberts, in the aforementioned interview, stated that it was “time to move on.”  Where should they move?  Here are three areas they should attack with vigor (and, IMHO, divert share buyback funds to do so):

These are three easy to solve problems that can run in parallel with bandwidth development, Wi-Fi and customer service initiatives.  As we discussed in a previous column, Comcast has generated over $7 billion in organic revenue growth over the last decade from non-core products (residential VoIP and commercial services).  Their ability to grow wireline revenues in the midst of overall market stagnation is a feat few outside of the cable industry have accomplished (at least not without significant M&A activity).

Comcast lost the battle, and now it’s time for them to win the war.  It starts with customer service recognition (a tall order) and continues with undisputed leadership in technological innovation (specifically the relationship between content delivery and network engineering).  Development and business partnerships will be essential, along with well- defined problems for the entrepreneurial community to solve with Comcast’s IT and network units.  Finally, it’s essential that “Philadelphia thinking” be replaced with “global excellence” as Comcast sources the best technology minds across the globe.

It’s time to move on.  Comcast still beats the telcos, but can it beat Google?

Next week, we’ll cover AT&T and Verizon earnings in detail, and provide any additional insights on the overall market.  Until then, if you have friends who would like to be added to The Sunday Brief, please have them drop a quick note to sundaybrief@gmail.com and we’ll subscribe them as soon as we can (and they can go to www.sundaybrief.com for the full archive).

Thanks again for your readership, and don’t forget to send in your use case for a “mobile first” event! Have a terrific week!