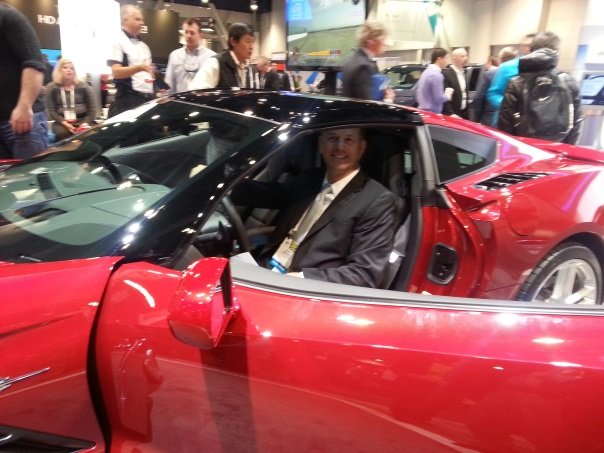 Greetings from the Consumer Electronics Show in Las Vegas.  Each year, when I head to CES, I think about the dreaded show floor.  Those of you who have been to repeat CES shows know exactly what I mean:  iPhone cases, stereo speakers, and (more recently) headphones as far as the eye can see.

There were a lot of accessories at this year’s CES.  But there were also many connected cars on display which turned a portion of the floor into a spectacular car show.  Chevrolet (John Braun, CEO of TIP Solutions, pictured in a Corvette Stingray), Lamborghini (with a 750 Watt Monster stereo system), Audi, Mercedes, Lexus and others were touting their ability to connect the driver and passengers to their car and the outside world.

Cars take up a lot of space.  They also are not a “quick look” especially if you are a car guy like me.  That creates a crowd, and the CES show floor has needed more “crowd” for the last several shows (which means a lot when you think about half of the 150,000 attendees are on the floor at the same time).

Health care also had a more prominent role at this year’s show, sharing the South hall with the home automation and security displays.  While many folks I talked to thought there was a heavy emphasis on personal fitness (and the effect of friendly competition on meeting or exceeding personal fitness plans), I found many of the booths (including the Reebok CHECKLIGHT concussion indicator and the dog health care monitoring system called Voyce) to be very interesting and timely.

In last week’s Sunday Brief, we batted around the fact that there does not seem to be a coordinated effort to consolidate the dozens of messages that smart home appliances generate.  Several of you indicated an interest in exploring how to bring this concept to market, but I found a company at CES who is well down this path.  The Arrayent Connected Platform hosts Whirlpool, LiftMaster, Chamberlain, Maytag and other brand name applications in the cloud, allowing manufacturers of connected devices to focus on hardware and connectivity, not the latest iOS or Android release.  While the company is still new, this was the first attempt to deliver customer-focused messaging for the connected home.   We agreed to stay in touch through the spring and perhaps feature their company in an upcoming Sunday Brief. 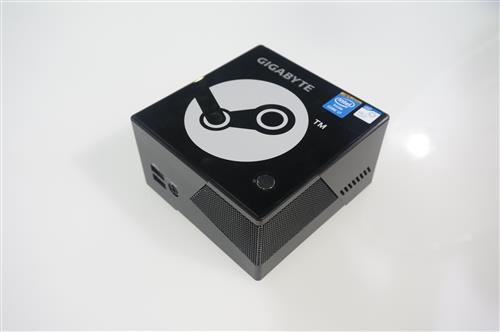 There were a lot of other very interesting developments:  The introduction of 13 Steam Machines using the recently developed Steam OS software (Steam has 75 million customers worldwide and is the leading distributor of online games through PCs – I especially liked the Gigabyte Steam Machine (pictured), the launch of the Sony Xperia Z1 Compact (many comments like “I could go back to small with this device”), and the launch of the LG Flex, a curved phablet with a six-inch screen (good video of the Flex is here).

Connected cars, wristbands, even beds – what next?  At this point, we stumbled on to the Corning booth and the best kept secret of the show:  Corning’s new Antimicrobial Gorilla Glass.  Yes, healthy glass, as the product person put it to me, “our claims are EPA validated.”  Using a patented ionic silver coating, Corning’s new product inhibits the growth of algae, bacteria, fungi, mildew and mold.  I never really thought about mold growing on my device, but I did think about germ spreading when I loaned one of my tablets to my four year-old nephew (who was just getting over a cold) over the Holidays.

While I am sure the antimicrobial glass will carry a steep premium, imagine the opportunities to use this at the ticket kiosk for a busy Metro station in Washington, DC, or in a busy hospital (or Walgreen’s pharmacy where all registrations are done through a touch screen).   Touch screens have long been germ carrying agents, and Corning is at the forefront of healthier communications.

The show was a good one for me, and I would be interested in getting your take if you attended.  For more details, have a look at reviews from the RCR Wireless, the Verge, CNET, and Engadget.  I also liked the ever cheeky “Worst of CES” post from ZD Net (the iPad periscope does look like a torture device).

Product features and functionality are only part of CES.  There’s also the presentation and presence associated with CES.  Take, for example, the highly reported presentation of Michael Bay of Transformers fame.  Stymied by the failure of his teleprompter, he simply said he was sorry and walked off the Samsung stage to stunned silence.  According to this report from The Guardian newspaper (which includes a video of his bizarre exit), many in the Twitter world responded with their dislike of Mr. Bay’s movies:

“Haven’t cringed like that since Transformers 2,” said one commentator. “I’ve often wanted to walk out of a Michael Bay [in] embarrassment too. Can’t blame him for seizing the opportunity,” said another.

Oh to have been a fly on the wall at Samsung World Headquarters in Korea during that botched presentation.  There was likely stunned silence, then lots of shouting. 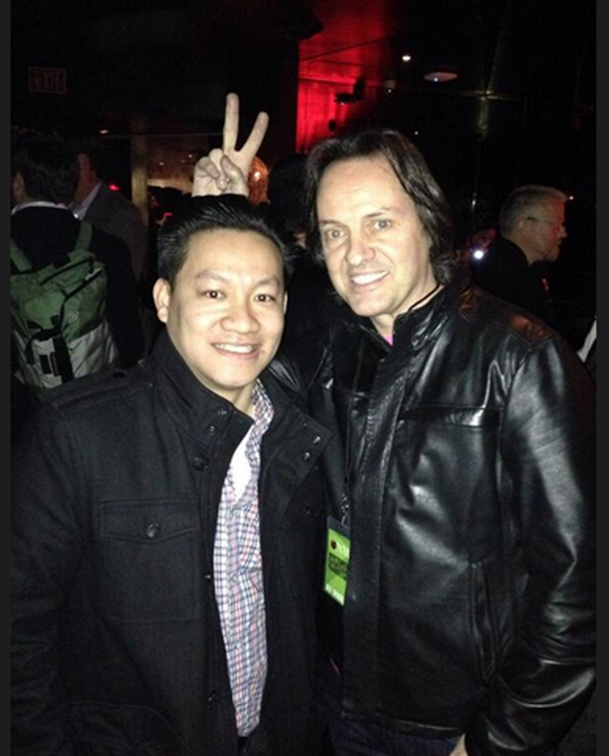 But that was not the only appearance garnering headlines at CES on Monday night.  In a true Uncarrier move, John Legere crashed the AT&T Developer Summit after-party which featured Seattle-born Macklemore.  He is pictured with Roger Cheng of CNET, who writes about how his Tweet likely got John and Braxton Carter (yes, T-Mobile’s CFO was also in on the action) kicked out of the party.  And, as the article goes on to describe, they got the passes from Macklemore’s agent!  John’s response:  “I want to to be free, I just want to live” which is a line from one of Macklemore’s more popular songs.

The party crash was one of the boldest moves I have seen by a public company CEO in years.  As many of you shared, the only thing that would have been more bizarre would be to see John and Sprint CEO Dan Hesse crashing the party together!  However, judging from T-Mobile’s preliminary fourth quarter earnings announcement, Dan is probably not on a first Tweet basis with T-Mobile right now.  For those of you who missed it, T-Mobile announced the following preliminary results:

There is a lot in this table, and we will have more dialogue on this after AT&T’s earnings announcement on January 28, but T-Mobile has staged the most remarkable one-year turnaround in telecom history.  They will have gained close to four million branded postpaid subscribers on their next largest competitor (Sprint) in one year, even as both are furiously building out LTE networks (and as Sprint decommissioned the Nextel network).  And, while Sprint will likely have eight million more total subscribers (one million more prepaid and about eight million more postpaid subscribers) than T-Mobile when year-end totals are announced, T-Mobile will likely generate more EBITDA than their third place rival. 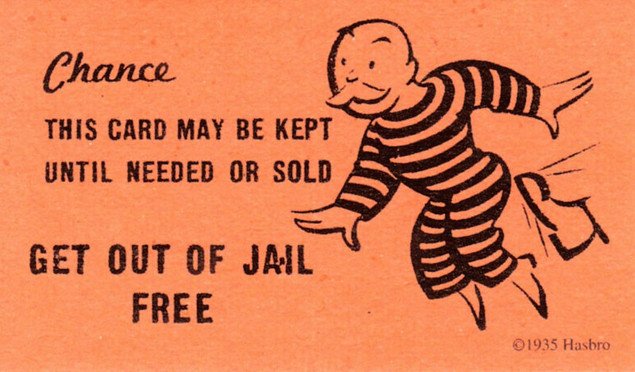 For most wireless companies, CES would be the perfect time to take the 2013 victory lap.   For John Legere and Mike Sievert, CES was the perfect time to launch their 2014 gross addition initiative.  While the plan lacks a formal name (unless they can negotiate a magenta “Get Out of Jail Free” card with Mattel), every current postpaid wireless customer knows that it’s an Early Termination Fee promotion (up to $350 per line).  It also includes an instant credit for up to $300 for every phone that is traded in (and a trade-in is required).

Whether this promotion spawns the wireless equivalent of “switch to [Long Distance Carrier] and cash this check”, which many of us remember as a common acquisition staple 15 years ago, remains to be seen.  Without a doubt, it’s going to drive up churn, particularly family churn for those who cannot afford or see incremental value in metered data plans.  That number is a lot larger than many in the industry realize – T-Mobile cited a Nielsen study which indicated 40% of postpaid customers feel inhibited because of high switching costs.  Regardless, it will drive more comparisons and more store traffic to T-Mobile.  How Sprint and Verizon will respond remains to be seen.

Next week, we’ll cover another important announcement from AT&T that occurred last Monday (Sponsored Data) and start to look at the fourth quarter earnings drivers.  Until then, if you have friends who would like to be added to The Sunday Brief, please have them drop a quick note to sundaybrief@gmail.com and we’ll subscribe them as soon as we can.  Have a terrific week!