Greetings from Lake Norman/ Davidson, North Carolina, where the college football season has started.  We took in the Davidson College home opener and the Wildcats (red jerseys) defeated Georgetown 27-20 to a crowd of more than 2,300.  It was an exciting part of the Labor Day weekend and a good win for the Cats.

This week’s Sunday Brief focuses on the potential of Citizens Broadband Radio Service (CBRS) to change the telecommunications landscape.  We will also have an update on C-Band spectrum auction news.  First, however, a quick follow up to last week’s article on AT&T’s system and network architecture changes.

We had greater than expected interest concerning last week’s TSB including receiving several background articles that we had not uncovered in our research.  One of the most important of these was a blog post by AT&T Senior Vice President Chris Rice on their Domain 2.0 developments that was posted on August 21.  In this article, Chris describes their major architectural change:

We started on a path for a single cloud, called AT&T Integrated Cloud (AIC). This was our private cloud, meaning we managed all the workloads and infrastructure within it. Originally, AIC housed both our network and several of our “non-network” IT workloads and applications.

But we quickly learned it wasn’t optimal to combine both types of workloads on a single cloud. It required too many compromises, and the IT and network workloads needed different profiles of compute, network and storage.

We opted for a better approach: Create a private cloud for our network workloads, optimize it for those workloads, and drive the software definition and virtualization of our network through this cloud approach and through the use of white boxes for specific switching and routing functions.

The change to last week’s article is subtle but not insubstantial:  AT&T’s network cloud (formerly AIC) is optimized for network traffic loads and functions (but still built on white box/ generic switching and routing), while non-network functions are operated in the public cloud through Microsoft and IBM. 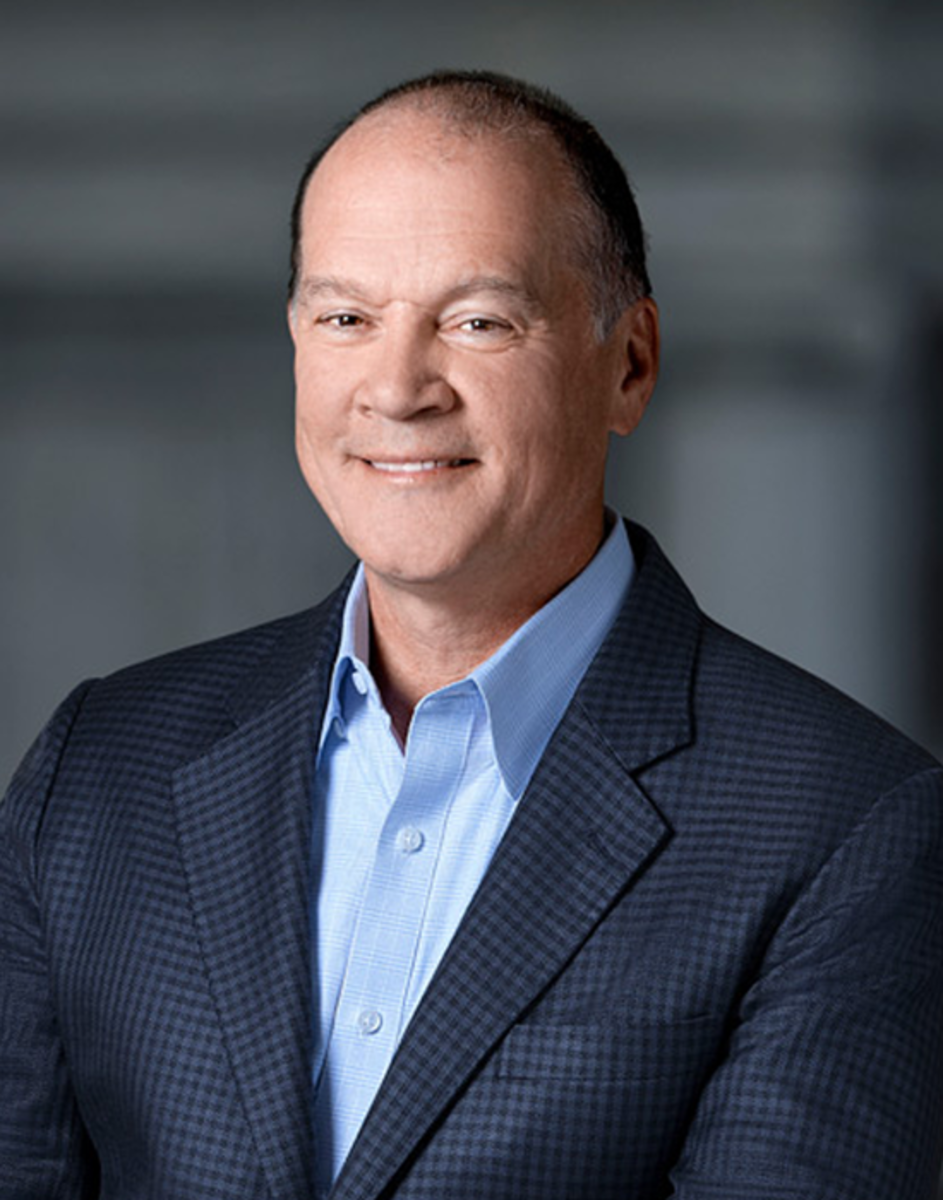 It’s important to note that the executive champion of this cloud strategy, John Donovan, is going to be retiring from AT&T on October 1 (announcement here).  We have included an early speech he gave on AT&T’s Domain 2.0 strategy in the Deeper post on the website.  John brought engineering discipline to AT&T’s management, and, while the parlor game of his replacement has begun, the magnitude of his contributions to Ma Bell over the past 11+ years should not go unnoticed.

When we put together a list of Ten Telecom Developments Worth Following in mid-July (available on request), we were surprised by a broad range of CBRS skepticism in the analyst community, especially given the breadth of US wireless carriers playing in the CBRS alliance.  “Nice feature” or “science experiment” was the general reaction.  Many of you chose instead to focus on the C-Band auctions, which are important and addressed below.

After some reflection, we have come to the conclusion that the most important feature of CBRS is neither its mid-band position (3.5 GHz), nor the mid-band spectrum gap it fills for Verizon Wireless (more on that below), but the fact that at times all of the spectrum band can be shared.  Customers receive the benefits of an LTE band without a costly auction process.

If you are intimately familiar with CBRS, you can skip the next couple of paragraphs.  For those of you new to TSB or the industry, here’s a copy of the slide we used to describe CBRS in the Ten Telecom Developments presentation to start your education: 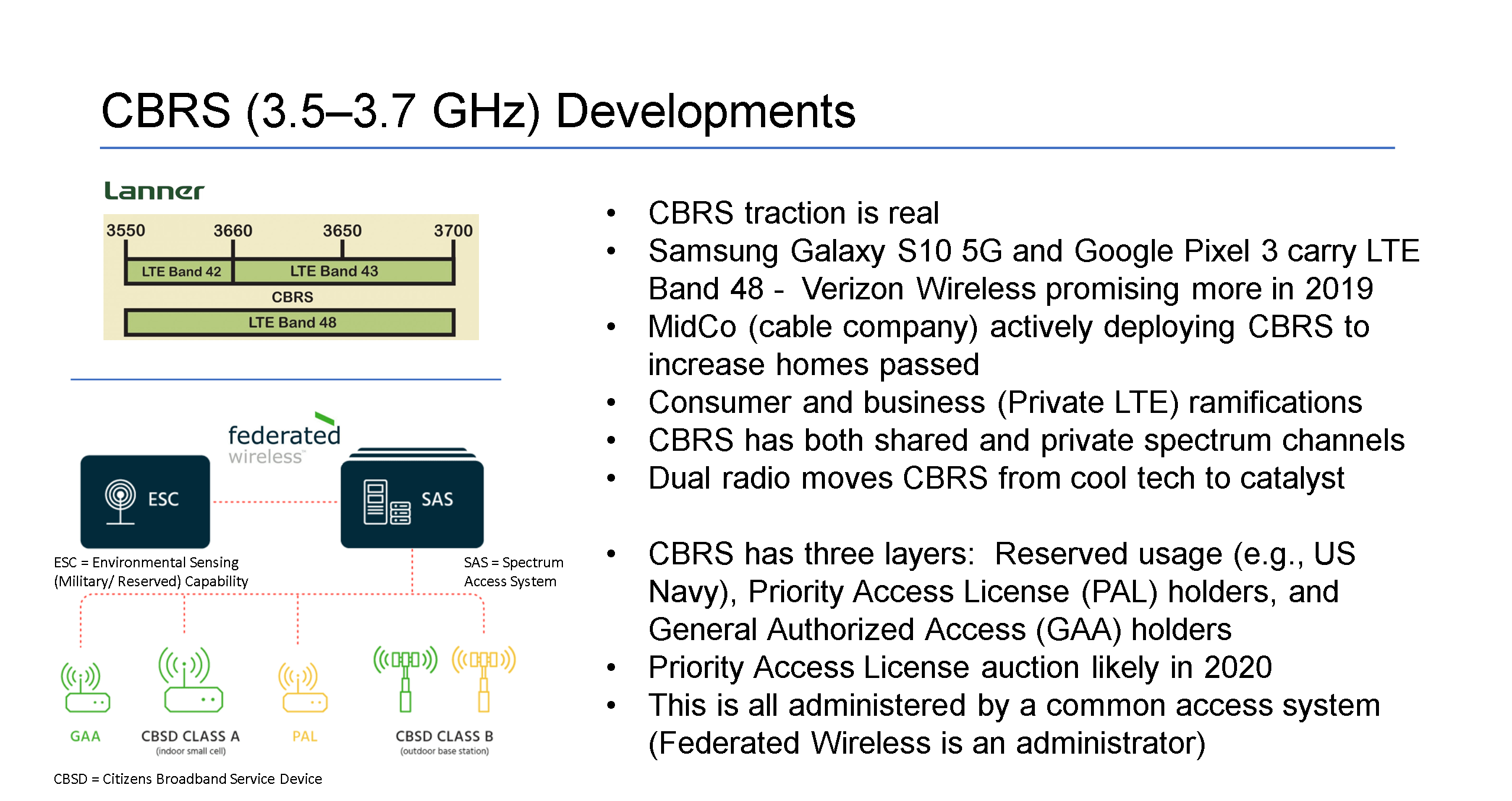 The commercialization of shared LTE bands is pioneering and one of the reasons why it has taken nearly a decade to move from concept to commercialization (the original NTIA report which identified the CBRS opportunity is here).  This does not appear to be a singular experiment, however, as Europe is proceeding with shared spectrum plans of their own in the 2.3-2.4 GHz frequencies (more on that here).

To enable this sharing mechanism in the United States, a system needed to be developed that would prioritize existing users (namely legacy on-ship Navy radar systems) yet allow for full use of the network for General Authorized Access (GAA) users when prioritization was not necessary (opening up to 150 MHz of total spectrum for GAA which could power 5G speeds for tens of millions of devices nationwide).  A great primer on how CBRS generally works and how spectrum sharing is performed is available here from Ruckus, a CommScope company and one of five Spectrum Access System providers.

It’s important to note that the Environmental Sensing Capability (which determines usage by priority) and the Spectrum Access System (which authorizes, allocates and manages users) are two different yet interoperable pieces of the CBRS puzzle.  And, while the ESC providers have been approved by the NITA (CommScope, Google, and Federated Wireless), the SAS providers have not been approved (more on that here in this Light Reading article).  While all of the SAS providers have not been made public, it’s widely assumed that they include the three ESC providers mentioned above.

Delays in the SAS approval process have not kept the CBRS Alliance from heavily promoting a commercial service launch on September 18 (news release here).  This event will feature FCC Commissioner Michael O’Rielly, Adam Koeppe from Verizon, Craig Cowden from Charter, and others who will celebrate the Alliance achievements to date and place the development as a central theme going into 2020.

CBRS Use Cases:  Not Everyone is Waiting for Private Licenses

The myriad of CBRS use cases mirror the different strategies for telecommunications industry players.  Here are four ways carriers are using CBRS in trials today:

AT&T has been testing CBRS as a similar “last mile solution” in Ohio and Tennessee using equipment from several providers including CommScope (ESC, SAS) as well as Samsung (network).  These trials are expected to wrap up in October.  If AT&T can find a more effective last mile solution for copper-based DSL in rural areas, revenues and profitability will grow (by how much depends on Connect America Fund subsidies and service affordability).

AT&T has been mum on their trial progress to date.  In June, however, AT&T asked the FCC to allow them to turn up antenna power in these markets to test various ranges and speeds (bringing the power allowances to a similar level of the WCS spectrum that AT&T already owns and operates in the 2.3 GHz spectrum frequency).  This was met with strong opposition by a coalition of providers, and it’s not clear that AT&T’s request was ultimately granted.  More on the AT&T request and response can be found in their FCC filing here, and in this June 2019 RCR Wireless article.

We spent some time a few weeks ago talking about the evolution of Verizon plans, specifically how their cheapest unlimited plan now includes no prioritized high-speed data (article here).  Is CBRS a better alternative to deprioritized LTE?

The short answer is “not yet.”  LTE Band 48 is only available across the most expensive devices, and, presumably, if customers can shell out $1000-1500 for a new device, they can probably afford extra LTE data allowances above 22-25 Gigabytes (see previous article linked above).  Notably, the new Moto E6 (budget-minded Android device) includes neither CBRS nor Wi-Fi 6 (specs here).  The new ZTE Axon 10 Pro phone does not include Band 48 or Wi-Fi 6 (specs here).  The OnePlus 7 Pro, however, does include Band 48 but not Wi-Fi 6 (specs here).  And, if rumors are to be believed, the upcoming Apple device announcement in a couple of weeks will disappoint everyone – no 5G, no CBRS even though the new device will likely support the 3.5GHz spectrum band in Japan, and likely no Wi-Fi 6 (which is why the Apple Card will likely be used to offer attractive financing options).

This leaves cable companies with a good selection of Samsung and Google devices that can use CBRS (Galaxy Note 10, Galaxy S10 5G, upgraded Pixel 3X and 3XL, and likely the upcoming Galaxy 11 release).  For cable to win on this front, they may need to provide plan incentives to influence the pace of upgrades and request this band for Moto and low-end Samsung devices.

The question that will be answered in the next quarter or so is whether CBRS is valuable enough to be a part of Verizon’s licensed portfolio (e.g., they buy 20 or 30 MHz worth of private CBRS licenses, or whether they use the GAA portion in the same License Assisted Access (LAA) manner as they use 5.0 GHz Wi-Fi).  It’s likely that if CBRS is important, they will be at the auction table.

It appears that the C-Band (3.7-4.2 GHz) license quantity and auction schedule is in flux, if the latest report from Light Reading (and the corresponding New Street Research analysis references in the article) is true.  This also impacts Verizon’s near-term interest in CBRS PALs.

Verizon’s interest is important as they can drive manufacturers to quickly include Band 48 in devices.

Bottom line:  CBRS is a real solution for rural broadband deployments and will attract the interest of large and small rural providers.  CBRS will be important to wireless carriers when Samsung and Apple join Google and Facebook in building a robust ecosystem.  This is a good/great but not an industry-changing technology.  If the first commercial applications are successful in 2019 (the odds are good), demand for Private Licenses will be significant (if not, expect more pressure to resolve C-Band spectrum allocation issues quickly).

What makes CBRS great is dynamic spectrum sharing among carriers.  Should that continue with all new frequencies auctioned (including C-Band), you should expect to see competitive pressures grow in the sector, particularly with private LTE/ indoor applications.

Next week we will provide the first of two third quarter earnings previews, focusing on wireless service providers ahead of the Apple event.  Until then, if you have friends who would like to be on the email distribution, please have them send an email to sundaybrief@gmail.com and we will include them on the list.