Can Sprint Restore its Luster? 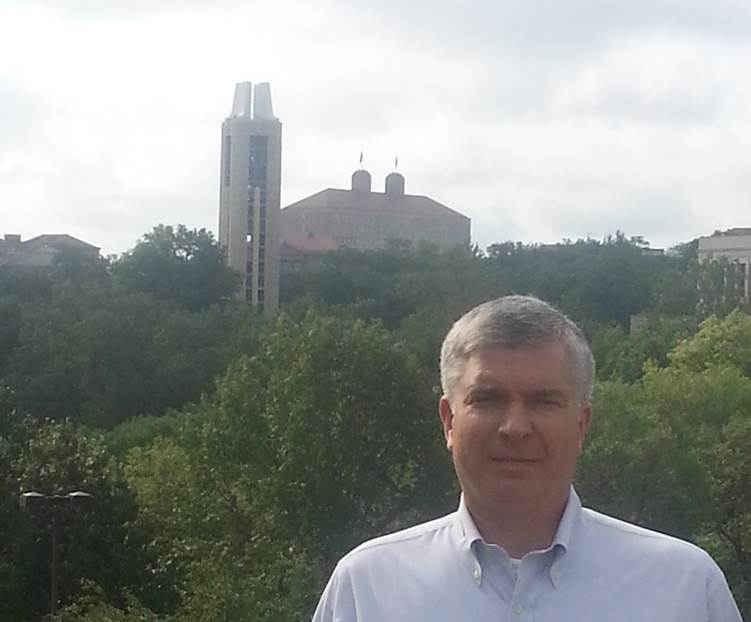 Greetings from Lawrence (KS) – pictured, Kansas City, and Dallas.  It’s been a busy week in the telecom world, with continued speculation about potential cable marriages (the latest on Friday was a combination of privately-held Cox Communications and Charter), robust cable earnings from Comcast, an entire network shut down as CBS and Time Warner continue their dispute, and the Obama administration’s intervention to overturn an International Trade Commission ban on certain older (3G) Apple products that was the subject of a lengthy lawsuit with Samsung.  Our industry is dynamic and multi-faceted, driven by speed to market.  We wouldn’t have it any other way.

Against this backdrop, Sprint announced earnings on Tuesday and, after a day or two of absorbing the earnings picture, Sprint’s stock rose 10%.  Since issuing post-Softbank shares (July 11 was the first full trading day – Sprint closed at $6.28), Sprint has performed better than T-Mobile USA, who will announce earnings this week.

What is motivating the resurgence in Sprint interest?  Here are several thoughts from discussions with many of you as well as a quick scan of recent earnings analysis:

The allure of Sprint’s recovery story, especially against the backdrop of Verizon and AT&T, is music to the ears of many Sprint shareholders who remember a double-digit share price just a few years ago.  However, as Sprint noted on the call, competition continues to be intense.  Here’s a short list of the headwinds Sprint faces:

Solving building/ floor level issues is Sprint’s Achilles heel.  It also happens to be an area of expertise for Verizon and AT&T, particularly where they are the incumbent wireline provider.  Relieving the pressure on the macro data network through in-building solutions is critical to spectrum optimization, customer satisfaction, and cost management.  It is not an optional strategy if Sprint wants to maintain their disproportionately high enterprise market share.

On top of this, cloud-based solutions (such as Desktop as a Service) are driving greater integration between office sites, remote servers, and wireless tablets/ phones.  Both Verizon and AT&T have the strategic pieces to assemble robust end-to-end service level agreements (Mean Time to Repair/ Fix, granular network reporting, applications monitoring and management).

Without computing and connectivity partners, Sprint will struggle to gain market share leadership in the enterprise space.   They will continue to struggle with connected device net additions (which were down 16,000 for the second quarter).  They will see more cable, Verizon, and AT&T in-region competition in the small business space.  They may even lose a partner because T-Mobile beats them to the punch.  Restoring the enterprise luster takes a lot of elbow grease and a lot of time – Sprint needs to apply the “enterprise polish” very liberally to remain relevant.

2. After Sprint completes 200 million LTE POPs, how do they get to 250/ 275/ 300 million?  When Sprint’s two larger competitors have completed or are near completion of 275-300 million LTE POPs covered, and T-Mobile has already announced a 200 million year-end POP coverage goal, how does Sprint respond?  Answering this question reveals how dependent Sprint is on Verizon (ALLTEL) for much of its non-metro/ non-highway coverage.  Here’s a good example of the difference in coverage between Sprint and Verizon:

From this picture, Sprint’s coverage is strong in the greater Atlanta metroplex (call it a 20-40 mile radius around metro Atlanta). 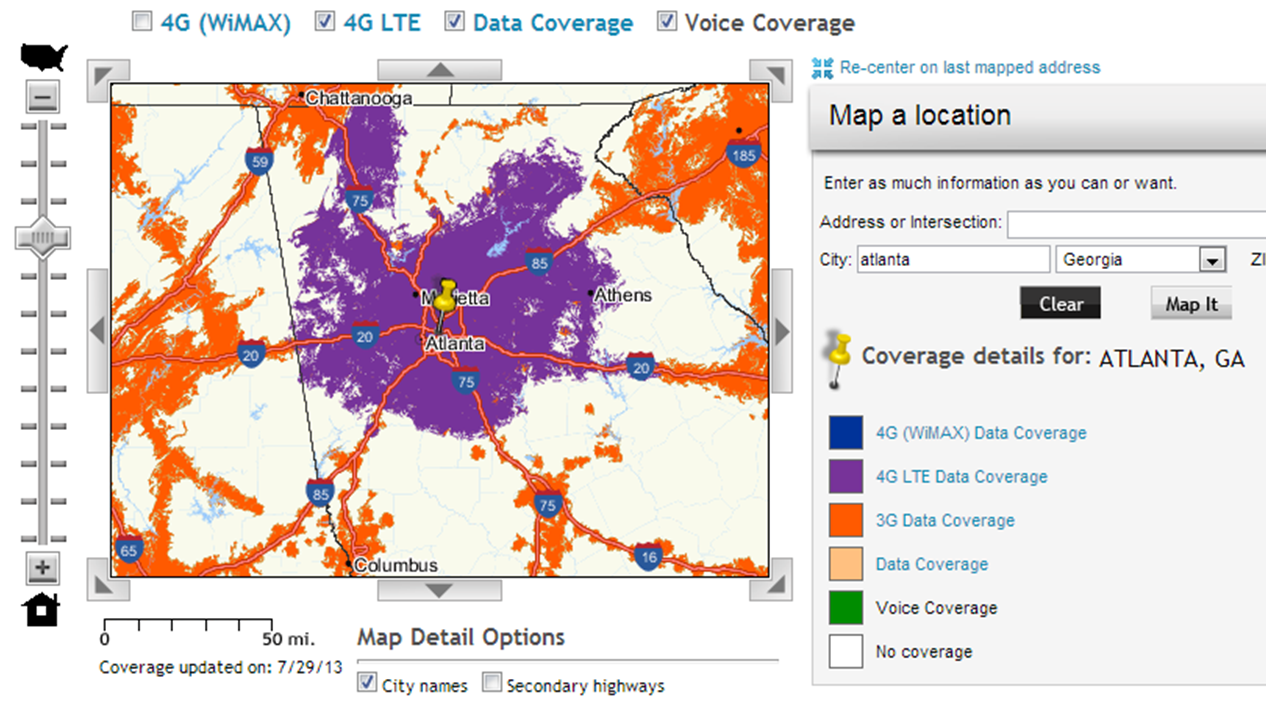 Here’s the same map for Verizon: 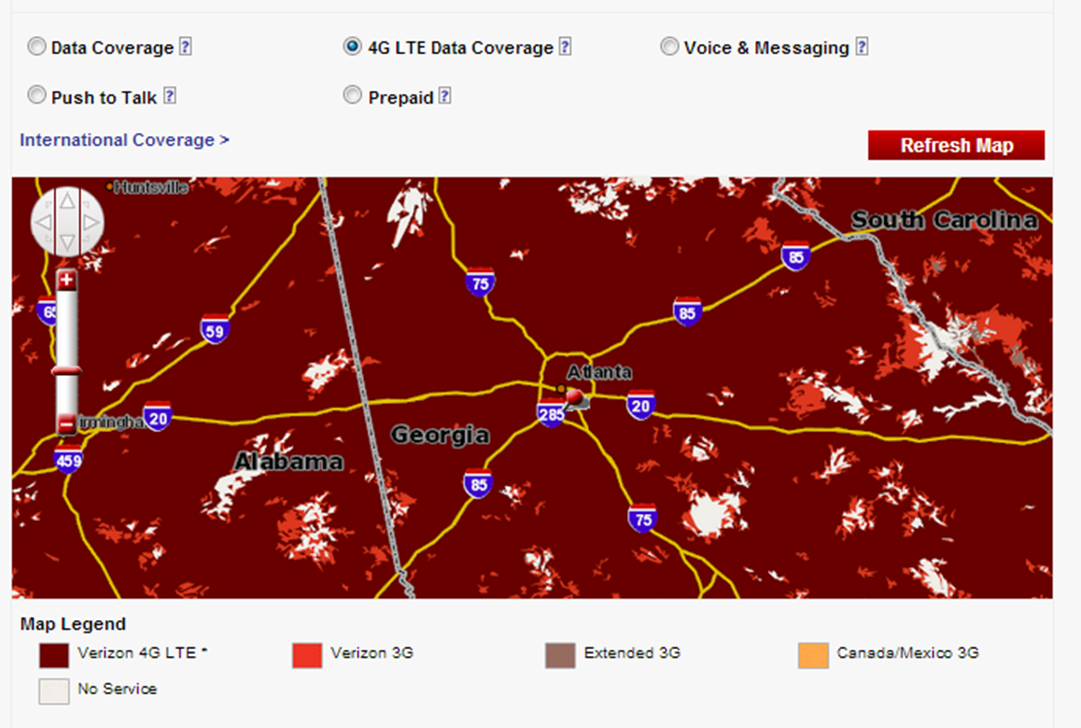 It isn’t hard to see the effect of different capital spending levels (over many years) when you look at these charts.  Verizon Wireless has spent $16.7 billion over the past eight quarters building out their LTE network and maintaining their legacy networks.  Sprint has spent $6.6 billion over the same period.  That’s $2.53 in Verizon spending for every dollar Sprint spent.  This ratio has largely held at a 2.5 level since 2008, resulting in a $24 billion difference in capital spending between Verizon Wireless and Sprint (I included all of Sprint’s capital spending in the above calculation.  The gap would be even wider if Sprint’s wireline capital expenditures were removed, but we would need to include some Clearwire capital expenditures as an offset).

Sprint (and T-Mobile) cannot compete without filling in the “white spaces.”  The Clearwire spectrum will be very valuable in metro areas, but Sprint could start today with their existing 1900MHz and 800MHz spectrum in these regions.  The best way Sprint could win against AT&T and Verizon is to partner with T-Mobile on attacking the “breadth issue.”  A cooperative effort might allow both companies to reach an additional 50-60 million POPs.

3. Sprint has new owners, but more debt than before.  Previously, this was defined as a payment issue for Sprint, and quarter after quarter Sprint had to reassure jittery bond holders that they would not default on their debt.  Sprint is far from these levels, and, as noted on the conference call, has seen their debt rating raised since the Softbank transaction closed.

However, prior to Clearwire, Sprint has done very well managing their balance sheet.  Here’s a snapshot from the quarterly presentation deck: 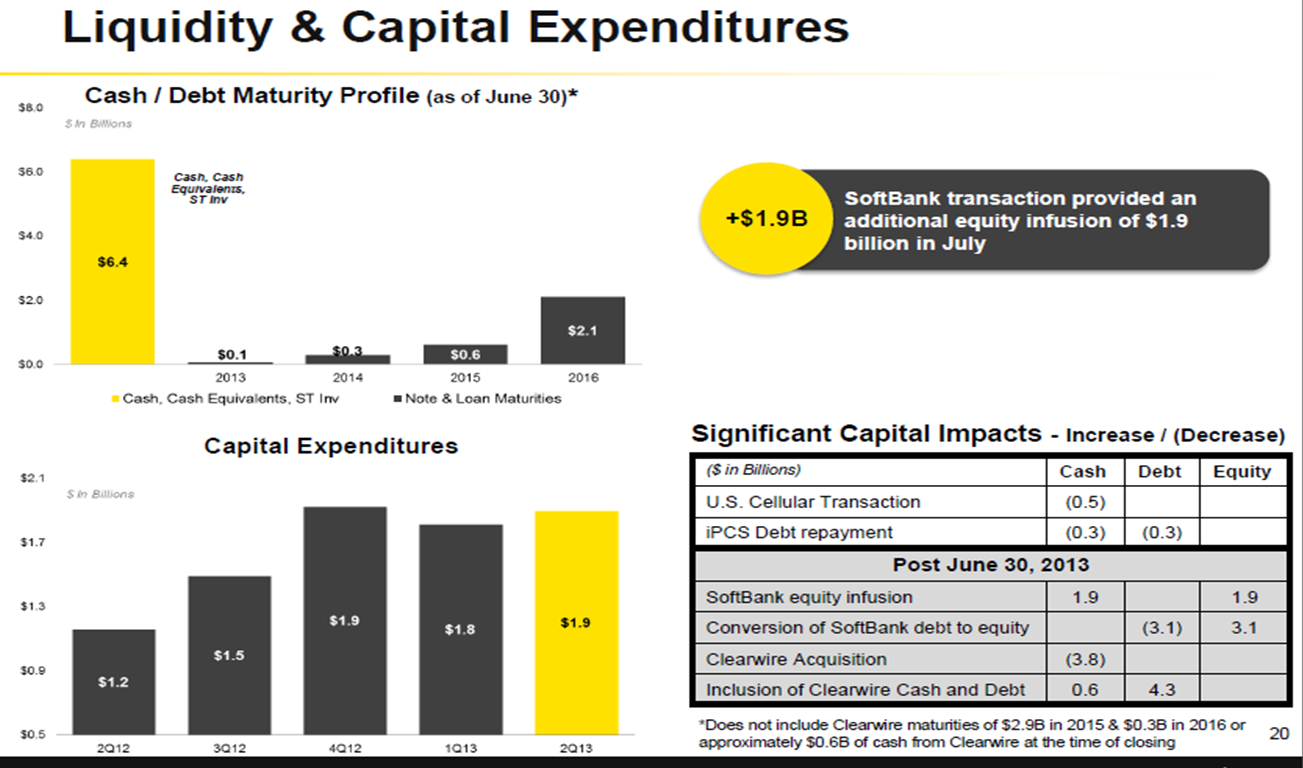 More debt reduces flexibility.  Verizon has options to expand in Canada – Sprint will likely pass on bidding for assets or spectrum.  Verizon has the opportunity to expand globally, perhaps through an acquisition of Vodaphone.  Sprint has to clean up Clearwire’s money-losing retail operation and decommission the Wi-Max network — a drag on earnings for several quarters. Verizon can focus on investments such as Home Fusion to bring LTE to less populated areas at economical scale.

Sprint needs to invest if they want to gain market share.  Their position is the best it has been in seven years, but Verizon and AT&T have also dramatically improved their balance sheets.  To win, Sprint will need to think differently – find the formula to restore the luster to their enterprise jewel, find the right partnerships to match Verizon and AT&T capabilities especially in well-populated but not urban areas, and execute flawlessly with their current capital resources.

There is a lot of blocking and tackling ahead for Sprint.  Moving from survival to leadership mode is not an easy thing to do.  But Sprint has surprised many before, and, thanks to Softbank, has the opportunity to prove them wrong again.  There’s a lot of buffing needed to remove layers of tarnish and restore the luster of 2005.

Next week, we’ll focus on wireline and cable earnings.  Until then, if you have friends who would like to be added to this email blog (over 100 in the past two months have been added), please have them drop a quick note to sundaybrief@gmail.com and we’ll add them to the following week’s issue.  Have a terrific week!