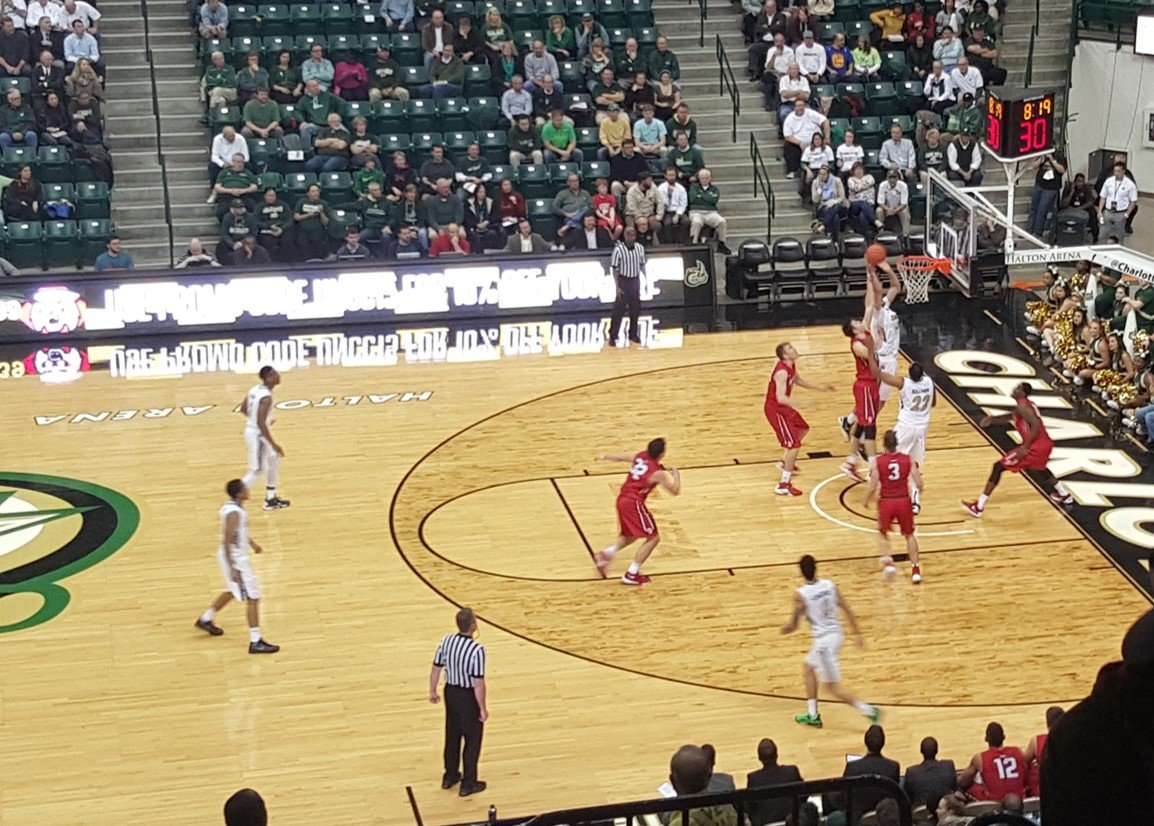 Holiday Greetings from Charlotte (this week’s Davidson College vs. UNCC basketball game is pictured) and Dallas.  Everyone is getting into the spirit of Christmas, especially the wireless service providers.  This week, we’ll cover the promotions landscape and dive into some of the deeper trends that will impact the industry in 2016.

Anyone who is looking for a deal in wireless this Holiday season is going to find one, especially if you switch.  Most of these deals are focused on new lines of service and ported devices.  Here’s a sampling of the most common deals available (by carrier):

(Editor’s note:  T-Mobile ran a similar upgrade promotion for all new iPhone 6S orders on Cyber Monday – 64 GB for the 16 GB price, 128 GB for the 64GB price.  $100 less impact than the AT&T promotion, but another good deal nonetheless for all of those iPhone 6S fence sitters).

Editor’s note:  Verizon also had terrific Black Friday promotions for Android lovers, with the Samsung Galaxy S6 for $3.16/ mo., the S6 Edge for $7.16/ mo. and the S6 Edge Plus for $15.33/ month.  These are Equipment Installment Plan (EIP) prices, not lease rates so the residual value accrues to the consumer.  All three of these devices can take advantage of Verizon’s XLTE network.

The LG Free TV offer was unexpected, however.  All existing customers who qualified, and all new customers switching to Sprint and purchasing an LG G4 for $18/ mo. (lease) were eligible to receive a free (S&H included) 24 inch LG TV.  Granted, a 24 inch LG TV has minimal value in today’s 60+ inch culture, but it is one of those things that stimulates in-store switching (e.g., customer likes Android but is torn or at least indifferent between a Samsung, HTC or LG.  “How about a free TV?”).  It kind of got us thinking about the sequel offer (wall ovens, washer/ dryers, laptops – the choices are endless), and I’ll leave you, the readers to devise your own “Buy One, Get ______ Free” offer.

On a more serious note, Sprint missed a huge opportunity here with their likely long-term partner, Dish Networks.  Simply receiving an HD TV is one thing, but its connection to the Internet and broadast networks is another.

What’s interesting about the plethora of wireless offers above is the absence of AT&T.  Their Black Friday special revolved around refurbished devices and subsidized plan (free phones with 2-yr commitment, not EIP) specials.  While AT&T’s post-DirecTV merger offer from the summer (4 receivers + 4 phones + 15 GB for $200/ mo.) still stands, their wireless efforts seem a bit light compared to their competitors.   Given the rumors swirling about a DirecTV name change (see here and here), AT&T might be waiting until the busy video/ broadband promotions season (Jan-Feb) to roll out new offers.

Bottom line:  Lots of promotions smoke, but little overall fire.  T-Mobile’s Binge On and Sprint’s “Cut Your Bill in Half” offers will have the broadest appeal, but there’s very little moving the largest carriers to cut rates or extend promotions to their base.  The Apple iPhone6S appears to be the big winner thanks to Sprint and T-Mobile’s lease offers (and presumably seasonally-driven upgrades at AT&T), but Samsung should get a bit of a bump thanks to Verizon.  And LG might see a slight electronics bump (I still don’t get that one).

The wireless industry is filled with a lot of change:

The next generation network (XLTE, T-Mobile’s 700 MHz, and Sprint’s LTE Plus networks) deliver anywhere from 20-40 Mbps downstream with growing consistency (see Atlanta’s 2H 2015 RootMetrics report for a good example – Sprint had 19.2 Mbps average downstream speeds and placed last), and 5G networks promise speeds up to 100 Mbps.  The next generation, spurred on by increased carrier aggregation and other innovations such as LTE-U, would imply a 500 Mbps rate.  While that may seem like a stretch to many of you, none of us saw a consistent 40 Mbps coming throughout a major metropolitan market in 2015.

In 2016, the name of the game will be consistency.  Can carriers deliver high data speeds without compromising voice and text quality?  The verdict is out for T-Mobile as Verizon and Sprint are consistently beating them in voice quality in the 2H RootMetrics reports.  Of the last 125 market scores recorded, T-Mobile’s score trailed the Call Quality winner by at least 3.0 points in 69 or 55% of them (T-Mobile won 26 or about 20% of the markets).

Can Sprint be known for (good) data consistency with the rollout of LTE Plus?  In the 2H 2015 RootMetrics reports, Sprint trails the market leader in network speed in nearly every market (Denver and Corpus Christi being the two exceptions).  That’s consistency of a different nature.  See the latest results for New York City and the Tri-State area nearby for an idea of how far Sprint needs to come to be “in the range.”  The New York results are not an outlier – see here and here and here for three recent Sprint last place finishes where Sprint trails the market leader by 25-30 points on Network Speed.

Lastly, can Verizon’s proven consistency translate into phone growth without compromising margins?  So far, Verizon has managed to grow connections per account and keep their enterprise business intact.  Can small cell and in-building deployments justify their premium rate?   Will the organizational changes that Verizon recently implemented result in diminished local focus?

Consistency requires strong cooperation and coordination between networks and content.  It requires superior engineering and a local market operations focus.  Most of all, with current market growth, it requires investment and patience.  Service consistency is a prerequisite for long-term market leadership.  The jury is out on who will best manage change and deliver consistent operating results, and the victor will be determined in 2016.

Next week, we’ll explore another key element to creating competitive advantage:  technology leadership.  Until then, please invite one of your colleagues to become a regular Sunday Brief reader by having them drop a quick note to sundaybrief@gmail.com. We’ll subscribe them as soon as we can (and they can go to www.sundaybrief.com for the full archive).  Thanks again for your readership, and Go Davidson Basketball!