Below the Surface, Why Wireless Carriers are Worrying 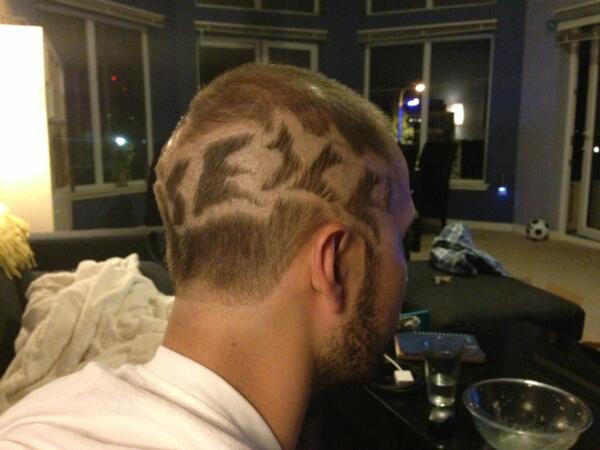 Greetings from Austin, Charlotte, and Dallas.  En route to Charlotte, I had the opportunity to meet Matt Wallaert, a behavioral scientist for the Bing! division of Microsoft.  Earlier in the week, Matt had been to the premiere of Star Trek Into Darkness in Los Angeles and had the Klingon word for success (see here) shaved into the back of his head.  (Bing! also launched the Klingon language translator this week).  I have to admit, I was a bit hesitant to strike up a conversation at first, but we had a terrific chat (most of it I will post on www.mysundaybrief.com this week).  Matt also has a terrific start-up background (Thrive, which was acquired by Lending Tree, as well as Churnless).  He was headed to the NASCAR race Saturday night in Charlotte.  Hopefully he found a good ball cap (or a razor).

Star Trek festivities aside, it was a pretty eventful week in telecom.  Google had their I/O conference this week in San Francisco (see here and here and here for the highlights – I still do not fully understand the value proposition of Google Music but this article does a good job of explaining the differences between six different music offerings).

Blackberry also had their Blackberry Live user conference this week in Orlando and used it as an opportunity to launch a low-end smartphone (3.1” screen) called the Q5.  A good summary of the phone from Engadget is here.  For a full take on the conference, Blackberry has a good blog on the topic here.

In the world of patent infringements, we had an earthquake of sorts when Alcatel-Lucent’s appeal of their patent infringement loss to Newegg was unanimously denied by a three judge panel.  This article from Ars Technica summarizes the case – definitely worth studying, as it was a terrific outcome for Overstock and Newegg.

Speculation is running rampant that the Clearwire shareholders are going to vote down the current offer from Sprint.  The vote is scheduled for Tuesday – look for the last minute offer modification (if there is one) early on Monday.  Meanwhile, Sprint closed its acquisition of US Cellular licenses and will soon use the spectrum to bolster their coverage in Chicago and St. Louis (Chicago has always been a spectrum-starved market for Sprint so chances are they have already started to put that spectrum to work).

Many more events happened in advance of the CTIA Conference in Las Vegas this week.  This year’s extravaganza features a power panel led by Mary Dillon, CEO of US Cellular.  On Wednesday, the focus turns to Latino marketing with Jennifer Lopez taking the stage.

CTIA is always a good show, but this year there is an undertone of concern and nervousness.  Each new smartphone announcement lacks the impact of previous years.   Consumer appreciation of camera quality can only improve so much.  Meanwhile, many phones, like the Blackberry Q5 and Nokia Lumia 520, are entering the market at very low price points (Nokia is rumored to have the 520 available for $150; it’s likely that Blackberry will be in the same range).  With more cases around more phones (thanks, Apple, for AntennaGate), there is an emerging market for trade-in/ reconditioned devices at $200-250 less than their newer counterparts.  The consumer has many choices, and subsidies are growing stale.

Meanwhile, three events have impacted the balance of post-paid power thus far in 2013:  1) Wal-Mart’s introduction of the iPhone5 (3G only) through TracFone/ Verizon.  We have spent some time on the million net add effect on Verizon’s Q1 and 2013 results as it has significantly impacted the landscape;  2) Verizon’s re-introduction of a $35 retail pre-paid feature phone offering in April 2013 and their recent announcement that they were increasing data speeds for their $60 and $70 smartphone monthly plans (2GB of 3G data, up from 500 MB, and 4GB, up from 2GB); and 3) T-Mobile’s introduction of their Simple Choice/ Less Money Down plans, especially the $99.99 (now $149.99) iPhone5 plan.

Pricing for each of these events points in one direction – down.  While there has been significant growth in smartphone adoption and shared data plans for families and small businesses, the unmistakable trends are lower cost devices, more replacement/ refurbished devices, and fewer contracts.   The postpaid subscriber is in the crosshairs. 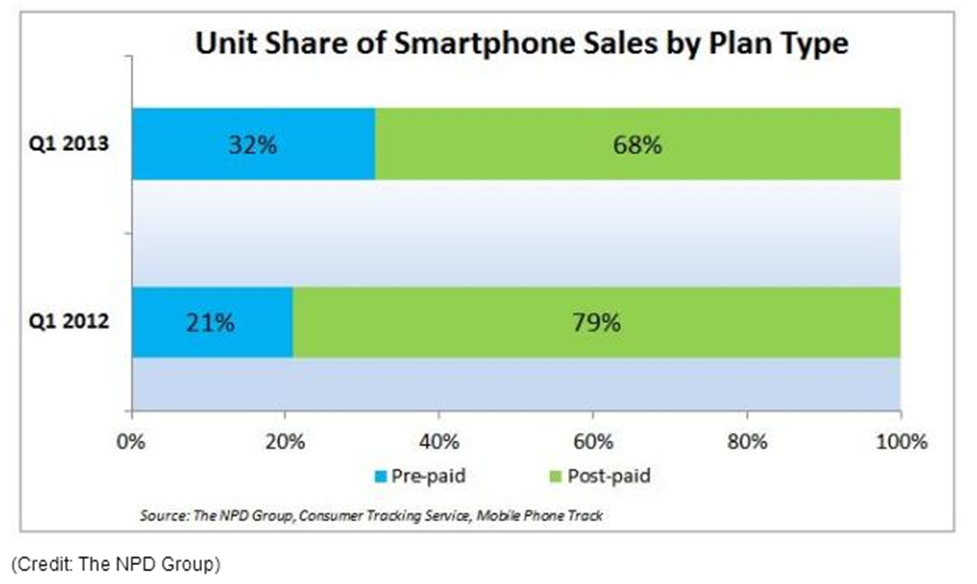 .  Here’s the first quarter year-over-year change in pre-paid smartphone additions as a percentage of the total:

That is a substantial change in mix with comparable (non) events in each quarter (no iPhone or Galaxy S III launches to skew the data).  Interestingly enough, it is a full 10 percentage points (1000 b.p.) higher than 4Q 2012, which was a big quarter for the iPhone5.

NPD goes on to say:

“In a quarter without a major product launch from either of the two market leaders, consumers refocused their attention away from the postpaid wars and toward finding the best value for their dollar,” said Stephen Baker, vice president of industry analysis at NPD. “Sales of prepaid smartphones doubled from the previous year, continuing a string of more than 12 quarters of triple-digit sales increases.”

We all know how a triple digit percentage increase on a small number can still result in an still small number (especially compared to post-paid) but 12 consecutive quarters of year-over-year sales increases cannot be ignored.

This is what keeps Sprint, Verizon, and AT&T up at night – customer refocus away from postpaid and on to no-contract.  They are asking “Can I get a good enough phone with good enough data to satisfy my needs from one of the top carriers?”  It’s a continual tug of war between the allure of smarter devices and bargains for the formerly smartest devices.

AT&T and Verizon Wireless have joined Sprint and T-Mobile in answering this question.  The matrix below compares their plans: 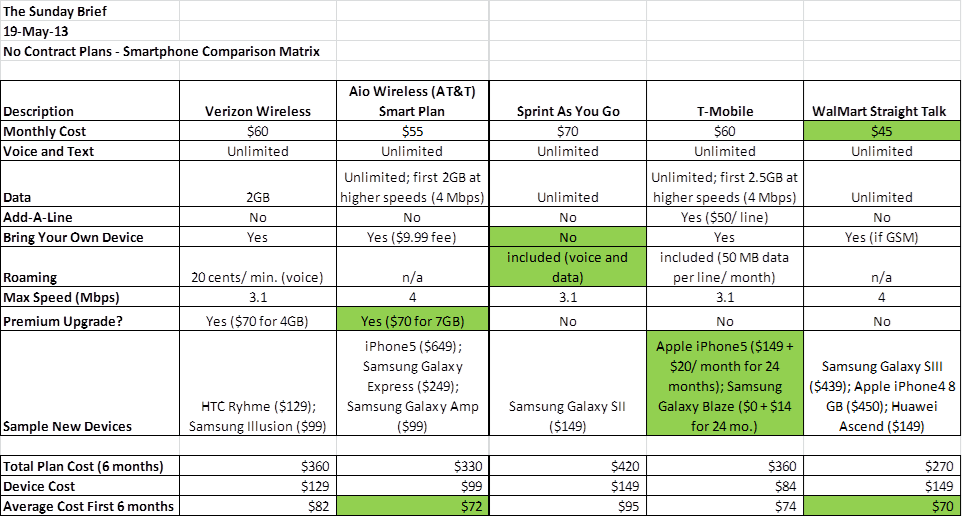 There are a lot of nuances between plans, but let’s look at the first two columns – Verizon Wireless and AT&T.  Both of the major carriers have competitive rate plans with sub-$100 devices (the Galaxy Amp is an Android 4.1.2 (Jelly Bean) device for $99; the Samsung Illusion is an Android 2.3 (Gingerbread) device for $99).  Both allow customers to bring their own device (with restrictions and potential one-time costs).  Both offer CDMA-Rev A and HSPA speeds (neither offers LTE) with generous data buckets for a mobile-dependent segment.  Neither plan offers the option of extending into a family plan.

This “first line” world is going to become intensely competitive over the next two years, particularly in areas where up to four networks are competing for the customer.  By the end of the year, some network plans (Sprint, T-Mobile) will include 4G LTE speeds and devices.  Also, by the end of 2013, a wave of GSM and CDMA iPhone 4S devices will hit the refurbished market (85% of these have been encased in silicone or heavy duty plastic since they were first used).  They will be more “like new” than any other refurbished Apple device.  T-Mobile is already adding 100,000 refurbished (AT&T) iPhones to its network each month.

When the average monthly cost of an unlimited plan (including the smartphone purchase) falls below a day’s wage (at minimum wage = $58), the “family” nature of postpaid plans begins to unravel.  This could happen at a $40 unlimited plan (with LTE as the predominant network, a 2GB plan is possible) and a $100 device.

T-Mobile is getting very close to this level with their 2-line cost of $100 and $0 down/ $14 per month new smartphone plans ($50 + $14 = $64/ line).  In fact, for three or more devices on a family plan, the costs are below $58/ line.  There are a lot of caveats to these plans (e.g., the $14 gets paid over 24 months which equates to a $336 commitment per device; T-Mobile’s network is not as large as AT&T’s; roaming and other charges are not included), but the point is clear:  For the ~ 200 million post-paid devices covered by four networks, the competition is about to get intense.

Where does customer loyalty reside?  Is it with Apple/ Samsung, or Verizon?  Does 4 Mbps/ second satisfy the needs of most smartphone consumers?  How big an impact will refurbished models have on the pricing and availability of new devices?  How does the availability of 100,000 Cable Wi-Fi Hot Spot devices affect the 2GB usage cap?  Does any of this matter when the user of the device is a teen or child?

The wireless industry was not asking these questions two years ago – phones were too expensive and showed signs of wear/tear, and we were thinking about the effect of the merged AT&T/ T-Mobile on the industry.  Two years from now, customers, not their contracts, will dictate their network provider choice.   That trend is causing many senior executives to pause and reassess their postpaid strategies, creating an extra wrinkle of worry on many management brows.

Next week, we’ll take a break for the Memorial Day holiday.  Following that, we’ll do our twice annual issue on which devices are being stocked for the summer season.  In the meantime, please support the fantastic entrepreneurs at TIP solutions by downloading their new application – CALL SNAP.