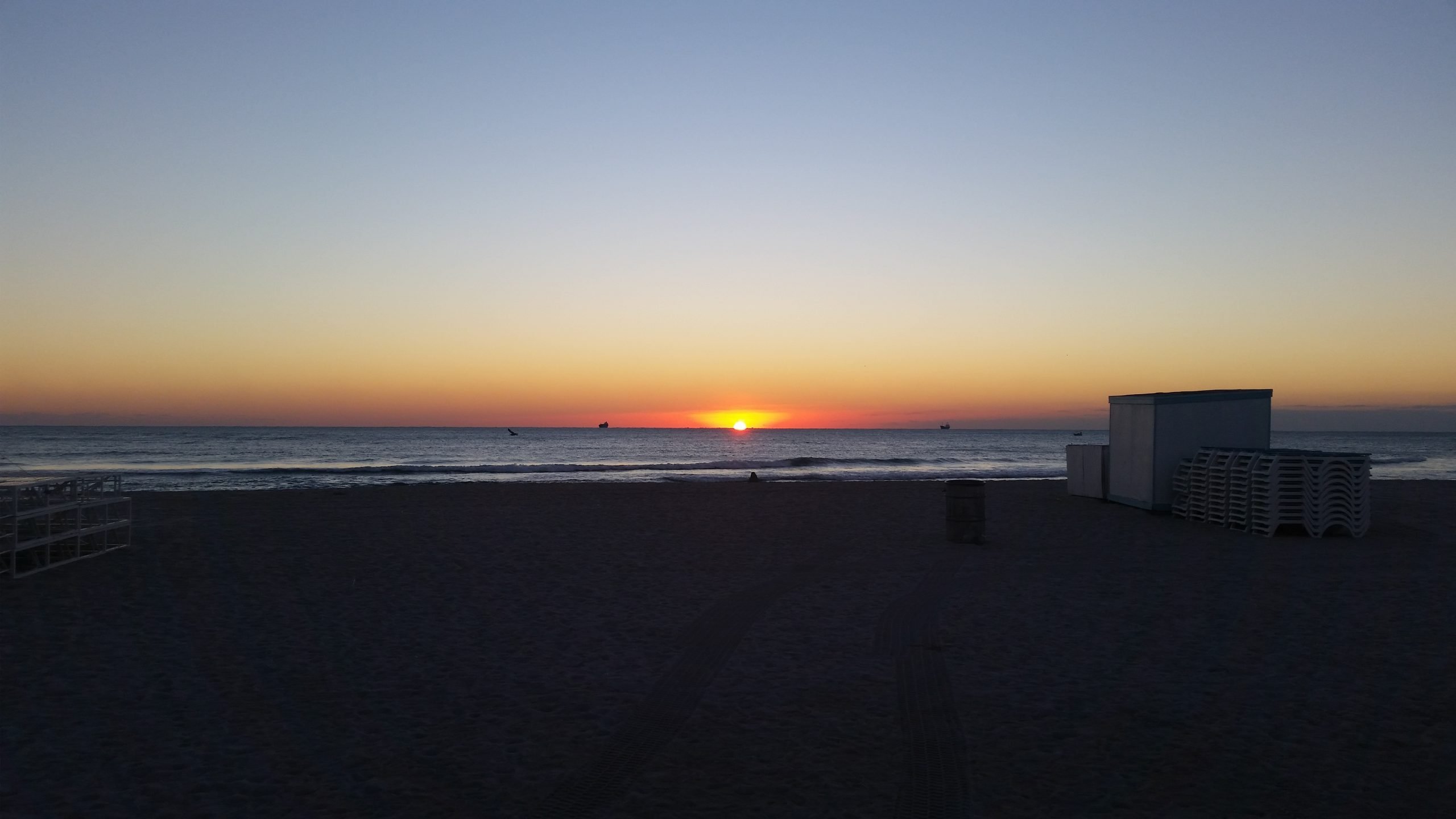 These three news items would be enough to fill three Sunday Briefs.  Believe it or not, we’ll only tangentially touch on them in this week’s Sunday Brief, and focus instead on AT&T and Time Warner Cable earnings. 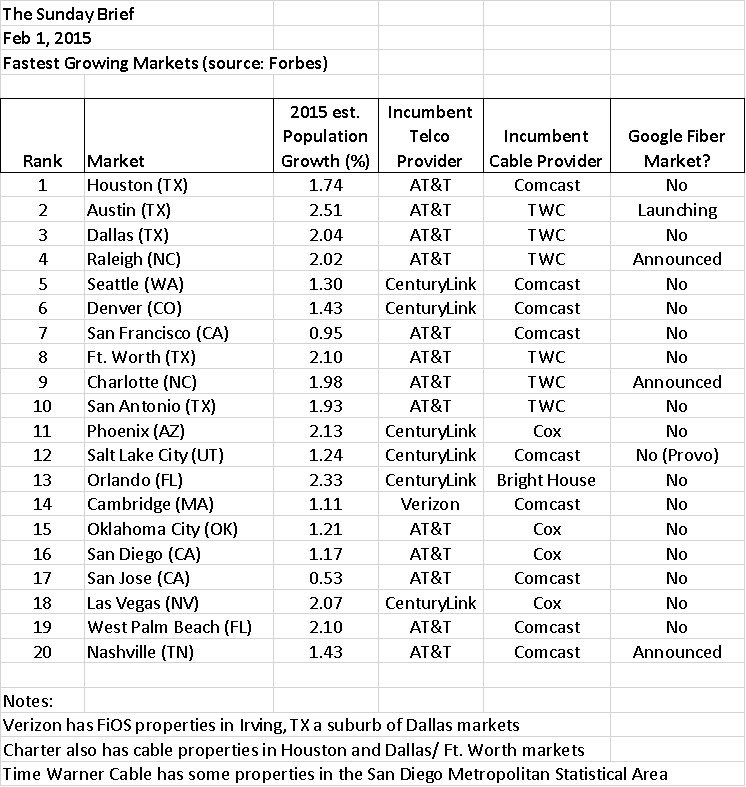 As a backdrop for the earnings discussion, a recent article from Forbes magazine listed the 20 fastest growing US cities (full article here).  If you are not familiar with the term DASH (which stands for Dallas-Austin-San Antonio-Houston), you should add it to your telecom lexicon.  Including Ft. Worth (sometimes included in the Dallas market), these markets account for half of the fastest growing cities in the United States.

This table (and other items within the Forbes article) help to frame the addressable growth markets for broadband and wireless.  Texas is the place to be, North Carolina is a close second, with California third.

AT&T reported earnings on Tuesday and the results were mixed.  While total retail postpaid subscribers rose, the phone portion of those net additions shrunk by 115,000.  Prepaid and reseller subscribers also fell in the quarter (although Cricket gained a small number of customers); these two segments combined have lost more than 1.1 million subscribers over the past four quarters, with most of them coming from the (AT&T branded) Go Phone losses.  Were it not for AT&T’s continued brilliance and strength in the connected device segment (driven by 800,000 automobile connections with free trial periods which begin to expire in Q1 2015), the wireless picture would have been solely focused on low-ARPU tablets. Even when accounting for Next (phone installment) payments, total phone-only ARPU customers fell by 2.3%.

Fortunately, the U-Verse picture was much brighter.  Revenues grew 21.9% after accounting for the sale of AT&T Connecticut, driven by Internet net additions of 405,000 and video net additions of 73,000.   AT&T reported 22% penetration of homes passed for video and 21% for broadband.  While low, this is a clear indication that there’s still a lot of room to grow (Verizon FiOS comparable metrics are at 36% for video and 41% for broadband).   Overall, broadband growth (U-Verse growth less DSL declines) was positive for AT&T and U-Verse is now a $15 billion dollar annual revenue stream.

Voice declines are halting EBITDA improvements, both in business and consumer markets.  The jury is still out on AT&T’s progress in their traditional DSL markets (75 Mbps is now available in more parts of California, Ohio, and Texas according to their earnings bulletin; 456,000 DSL losses this quarter).  The transition from legacy SONET-based services to lower-priced Ethernet services is impacting business and wholesale margins.  Few things at AT&T are in a steady state.

What to do when the core business is in decline but the balance sheet allows for additional leverage?  Buy spectrum ($18.2 billion to enable a nearly nationwide swath of AWS-3 spectrum) and expand competitive advantage through acquisition (DirecTV, Iusacell, Nextel Mexico).   AT&T established 2015 guidance of low to mid-single digit revenue and low single digit EPS growth including acquisitions.

As we have discussed in several previous Sunday Briefs, new revenue sources directly attributable to Project VIP need to account for approximately $50 billion in revenue for the next five to seven years.  Here’s the math:

Given these lofty (and potentially unachievable) expectations, AT&T has to expand.  They need a            greater share of broadband decisions (helped by people moving into Texas, California and North Carolina).  They need businesses to expand their wireless and broadband data and security needs (again helped by their geographic locations).  They need a rejuvenated AT&T Mexico to result in market share gains in California, Arizona, New Mexico, Colorado, and Texas.  Most of all, they need content differentiation and cost reductions from DirecTV.

The list is long, and, while the Cricket integration is ahead of schedule, merging satellite and Mexican operations is a lot different than local wireline and wireless integrations.  AT&T will lose market and investor confidence if they materially fail in any aspect of this multi-part program.  One misstep, and their cable and wireless competitors will be waiting to harvest additional gains.

Time Warner Cable also reported earnings this week (full details here), with triple play (voice+video+phone) and business growth driving total revenues and EBITDA up 3.8% and 5.6% in the fourth quarter.  The triple play story has two parts: a) upsell the single and double-play base (namely to digital phone), and b) acquire a disproportionate share of decisions of movers (see earlier in this Sunday Brief on population growth).

Voice is a high margin product when sold as a part of the triple play, however.  Think of voice as a narrowband application revenue stream riding over an existing voice or data stream.  While the incremental gross margins are not as high as High Speed Internet, they are still meaningful. 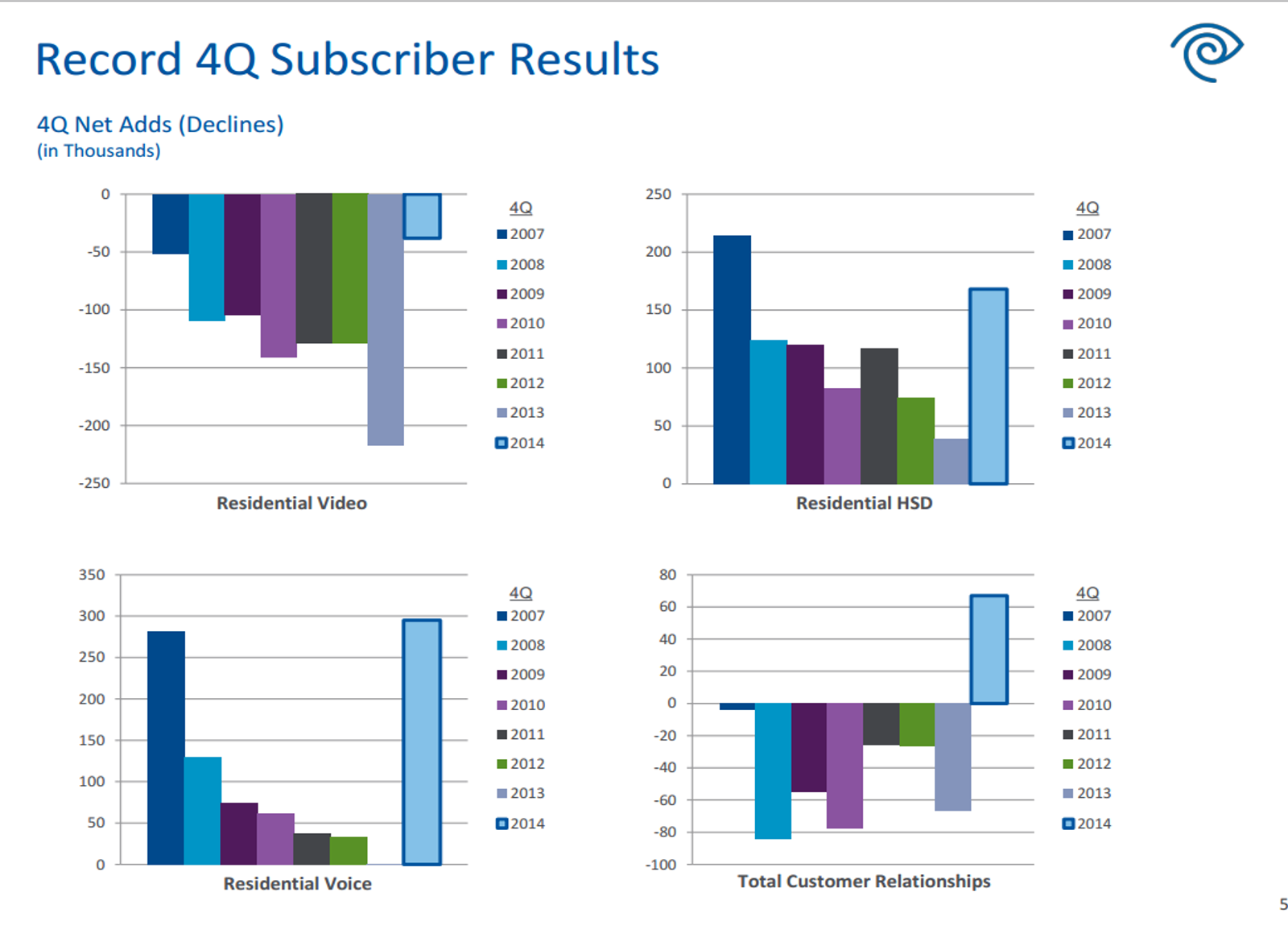 Nowhere are these trends more apparent than in the nearby chart (note: this chart does not compare sequential growth, but rather changes versus previous 4Q figures).  High speed data growth – best for a fourth quarter in seven years.  Same story for residential video losses.  Voice gains were the best on record.

This is exactly what Time Warner Cable should be doing ahead of their merger with Comcast – driving subscriber growth and customer relationships with a focus on high speed data and voice acquisition (leave further video penetration for the eventual introduction of Comcast’s Xfinity platform).

While this column has been critical of Time Warner’s failure to capitalize on opportunities in the past, it’s very clear from fourth quarter earnings that the company is placing its priorities on plant overhaul, connection quality, and speed differentiation.  Adding additional revenue generating units to the mix is a heck of a lot easier with healthier New York and Los Angeles properties.

More on cable’s overall situation after Comcast’s earnings (February 24).  Most companies in Time Warner’s case would have milked the last couple of quarters of earnings.  In this case, their “full steam ahead” activities in 2014 provides TWC momentum throughout 2015.

Next week, we will look at Sprint’s earnings and touch base on Microsoft/ Google/ Apple / Amazon earnings which all happened last week.   Until then, if you have friends who would like to be added to The Sunday Brief, please have them drop a quick note to sundaybrief@gmail.com and we’ll subscribe them as soon as we can (and they can go to www.sundaybrief.com for the full archive).