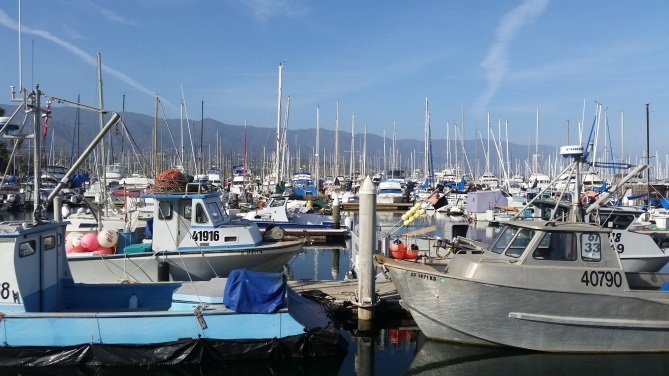 End of quarter greetings from Santa Barbara (marina pictured), Austin, Dallas, and the Outer Banks of North Carolina.  As a reminder, the Sunday Brief will take a brief hiatus next Sunday for the Fourth of July holiday (and my 47th birthday).   This week, we will attempt to cover wireless/ mobile software developments for Amazon (Fire phone), Google (MicroMax device; Android L; Android Watch; Android TV; Android Apps on Chrome), and Apple (iOS 8).  But first, a couple of newsworthy items.

On Wednesday, the Supreme Court ruled by a 6-3 vote that Aereo, an “over the top” television services company, violated US Copyright Law.  In the majority ruling, Justice Steven Breyer writes:

Viewed in terms of Congress’ regulatory objectives, these behind-the-scenes technological differences do not distinguish Aereo’s system from cable systems, which do perform publicly.

As a result of the ruling, Aereo suspended operations on Saturday

.  At the heart of the matter are two fundamental questions:  1) What is a “public performance” which is the basis of current copyright law, and 2) “How much content can be withheld from retransmission?”

Without going into all of the details of how Aereo works (you can find that here from CNET), it’s basically a centralized antenna combined with cloud-based DVR functionality for $8-12/ month.  Broadcasters alleged (and the Court upheld) that Aereo violated the “transmit clause” of the 1976 Copyright Reform Act.  This legislation clearly outlines that the retransmission of a signal is a public performance (and public performances are subject to copyright fees).

Because Aereo was found by the Court to be a “public performance” they are subject to retransmission fees for broadcast channels (and therefore subject to the Most Favored Nation clauses of the cable companies which guarantee a relative cost disadvantage for Aereo – today).  However, if Aereo were to configure their architecture to be one of “private” performance (it’s hard to imagine how a unique antenna per customer could be any more private), they would now face the issue of broadcast station blackouts (in other words, while the transmission may be legal, the broadcaster cannot be compelled to show all content (and especially live content), to companies like Aereo).  As an example, even though CBS shows a lot of content on their website (see here), they do not show all of the content, and what is shown is not live streamed.

For more details on the case and a good history of the the definition of “public performance,” have a look at these articles from Ars Technica here and here.  Politically, it pits content developers (who have large centers in Southern California and New York City) against West Coast (and New York City) disruptors who have already upended retail (Amazon), publishing (Amazon), advertising (Google), autos (Tesla), lodging (Airbnb), and hired car services (Uber).   It’s a tension that could impact political elections for decades to come as the West Coast begins to “play the game” with greater vigor.

On June 18, Amazon released their long-awaited Fire Phone (the full press event release is here).  It’s a high end spectacle of a device, fully equipped with 3D sensing capabilities (which allow you to see 3D products in the Amazon website more clearly), as well as collect information about your daily life through a unique feature called Firefly (bar codes, document capture, websites, etc. – an excellent way for Amazon to have many “eyes and ears” on the world). 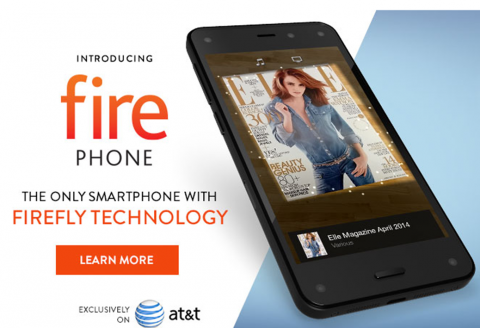 There are many features of the Kindle Fire phone, but none are as important as its integration into the lives of Amazon Prime users.  While likely dismissed as a gimmik by their smartphone rivals (and, without a doubt, Amazon is in the smartphone business now), offering free Amazon Prime services to Fire Phone customers is not a “passing thought” promotion.  Amazon has struggled with the concept of moving the allure of Prime beyond free 2-day shipping.  Prime Instant Video has enjoyed limited success.  Kindle Owners Lending Library and Kindle First have had equally “meh” responses.  But half off a killer smartphone over AT&T’s network?  That might work, especially for the AT&T base.

The key to Amazon’s success lies not only with AT&T + Amazon Prime customers, but also with the developer community.  VentureBeat ran a great article this week where they interviewed many developers in the gaming community.  To use a common Valley buzzword, they were “intrigued” at the prospect of existing game modification to include Amazon’s Dynamic Perspective.  However, the 3D feature is currently only capable on the Fire Phone – a similar device would need to be implemented for the Kindle Fire (Tablet) to be able to maximize the revenue potential of the application.

Given the emergence of Android L (which supposedly contains 5,000 new APIs), the growing acceptance of Android 4.4 (KitKat) as the “new” Android standard, and continued upgrades seen in iOS 8, will developers take time to develop for Amazon’s latest device?

The troubling answer for the Seattle retailing giant is “maybe.”  While Amazon’s developer support has been stellar (and, given their excellent support for other Fire Apps, there’s no reason to assume it will not continue), aligning exclusively to AT&T limits their addressable market.  Relying on AT&T’s in-store selling abilities in light of Nokia’s recent and repeated failures is risky and potentially very expensive. Without a doubt, AT&T has a good network, but they carry an Apple smartphone legacy that will be difficult to unroot.

On top of this, the applicability to “mass market” apps such as Pandora/ Spotify (and even Amazon’s Prime Music service) and Facebook/ Vine/ Instagram is limited without 3D photography.  If you watch the VentureBeat hands on demo embedded in the article, you will see what I mean when the reviewer gets to e-mail (a classic 2D app).  The Kindle Fire phone cannot excite email.  It may not be able to excite Pandora.  And if it cannot excite picture-focused social networks, fuggetaboutit.

Here’s what will likely happen:  Many developers will try once, and, with limited Kindle Fire sales, will not try again (absent Amazon throwing in aggressive payments or discounted cloud computing).  Amazon will develop a more affordable device that will be free to all users (across all carriers) with a paid Amazon Prime (and postpaid wireless carrier) subscription.  That’s when the fun will start and Amazon can then begin to offer “sponsored data” services (through AT&T and others).

Two and a Half Hours of Android – Three Big Developments From I/O.

Like many blogger/ analyst/ consultants, I begin each year thinking about trade shows and events:  CES, CTIA, COMPTEL, the Cable Show, and the coveted Apple WWDC.  This year, I was invited but could not attend Google’s I/O 2014.    It looks like I missed a lot in their 2.5 hour presentation.

First, Google introduced Android One, a reference platform that allows handset manufacturers to make less expensive (and slightly less functional) Android models.  This is critical for countries like India, where IDC reports that 78% of smartphones purchased in India were under $200 (see article here).  This reference platform can be used by Karbonn, Micromax (see phone that was featured at IO that was written to Android One specs), Spice and others to deliver maximum functionality for cost-conscious budgets.  The phone pictured has dual SIM-card slots, a 4.5 inch screen, and an FM radio for $100.  (To get an idea of what mobile devices cost today, have a look at the Micromax site on FlipKart here.  There are about 60 Rupees per US Dollar).

While the latest Android release (known as KitKat) is in full bloom, Google announced a new version of Android code-named “L.”  While some of the improvements are iOS catch-ups (e.g., lockscreen notifications, prioritized alerts based on phone activity, etc.), others are extremely innovative (e.g., integration into Android TV and Android Wear, the use of Wear device proximity to keep Android devices unlocked (and vice versa), and the ability to interlock information between Google and non-Google apps).  The new Android L appearance is both flat yet detailed – as one of you who saw an L-equipped device put it to me, a “clearer yet softer version than iOS8.” 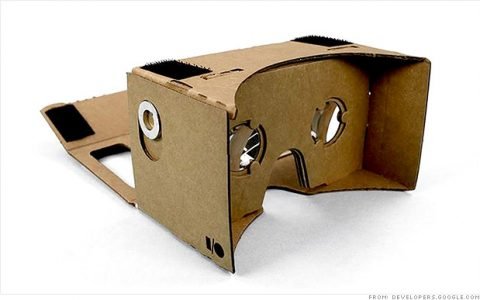 Finally, Google surprised everyone with the Google Cardboard giveaway.  This is no Oculus Rift, nor is it intended to be.  But, to get the developer community thinking about how to develop a mass market Virtual reality experience (a brilliant idea in and of itself given the overall public “meh” over Google Glass), they included a free cardboard cutout, a few magnets and a rubber band along with a link to some Google software.  Just slide in your Android-enabled smartphone into the cardboard contraption, and voila – you have a DIY Virtual Reality mechine.

The first reaction was an overwhelming “What the..” which has now been followed by a nearly unanimous “I get it – great idea!” chorus.  Rather than regurtitate the analyst reaction to Google Cardboard, read it yourself here and here (the video in the second link is hilarious).

In two weeks, we’ll have our second quarter preview.  If you have friends who would like to be added to The Sunday Brief, please have them drop a quick note to sundaybrief@gmail.com and we’ll subscribe them as soon as we can (and they can go to www.sundaybrief.com for the full archive).