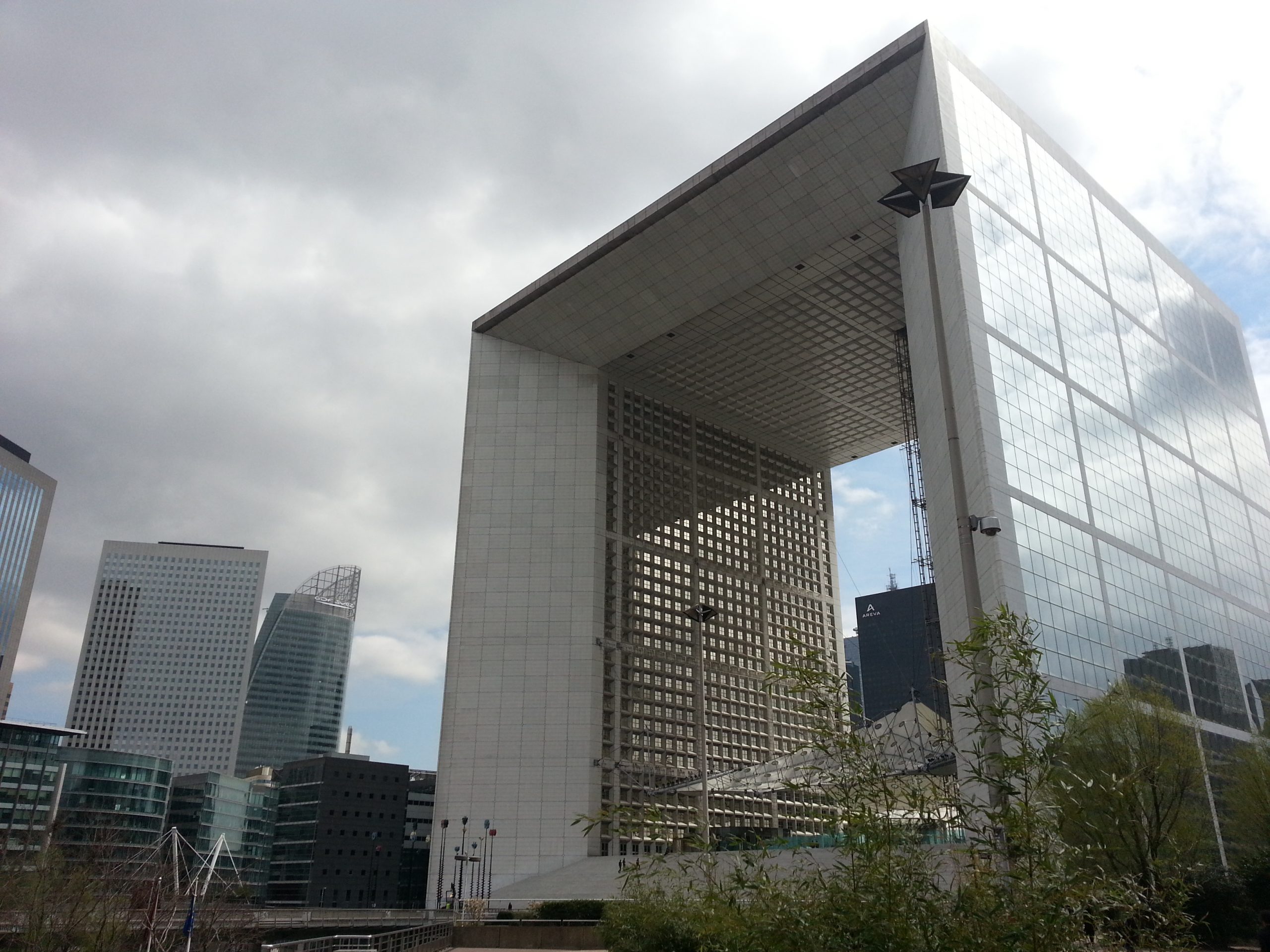 Greetings from Dallas and Paris, France, where the days are still gray but spring is definitely around the corner.  This has been a full week of telecom earnings, with AT&T, Sprint, and Time Warner Cable reporting Q1 2013 results.  On top of this, MetroPCS shareholders overwhelmingly approved the revised terms proposed by T-Mobile two weeks ago, and they began their telecom honeymoon.

As we highlighted in last week’s Sunday Brief, there was a postpaid net earnings surprise with both AT&T and with Sprint.  AT&T reported 296K net postpaid subscriber additions, but many analysts estimated that postpaid retail smartphone growth was zero or even negative.  Sprint’s situation was more acute, losing 560K subscribers overall and only gaining 12K on the Sprint CMDA/ LTE platform.  Overall, Sprint and T-Mobile are much closer on rolling four quarter losses than they have been in a while:

Speculation continued that Verizon Wireless would purchase Vodaphone’s portion of their JV for $100 billion, although many of Vodaphone’s investors believe that’s about $30 billion too light.  Regardless of investor posturing, VZW has the ability to retire all of their remaining debt in the next quarter, so decisions need to be made about earnings distribution.

In cable news, Time Warner Business filled their President position with Cox and MCI veteran Phil Meeks, the second time in seven years that Cox has produced business leadership for one of their larger cable peers (Bill Stemper moved from Cox to Comcast in August 2006).  As we will discuss below, while Time Warner Cable has done a good job with their current leadership, a higher gear is needed to capitalize on tremendous market opportunities.  Phil is a relentless individual whose kind style masks an intense competitive spirit and attention to detail.  Changes are coming at Time Warner Cable.

Lastly, as many of you noticed, I re-surfaced on Bloomberg last Friday, not because my plate was empty but because they agreed to let me write the script.  While I did not address WalMart’s launch of the iPhone (the segment was already at four minutes), many of the previous Sunday Brief themes were front and center.  Several of you are pros at doing TV interviews, and I welcome your constructive feedback as this was my first TV in seven years.

Before digging into earnings, a quick and painless request to help out two companies I am advising – StepOne, Inc. and SNAPJAW.  If you are attending CTIA, StepOne needs your vote for the Emerging Technology of the Year.  The company, which provides “Predictive Service Solutions for Connected Devices” is entering their first large growth period and accolades are important.  Please vote here and encourage your friends to support this innovative company who is reinventing service through your smartphone.

Serial entrepreneur Alex Panelli is the CEO of SNAPJAW, a product that allows your license place holder to reflect your feelings about life, the driver behind you, or your favorite sports team.  I have had a lot of fun with this company, and Alex and his team have put a lot of thought into keeping the product safe, cheap, and fun.  They have begun the Kickstarter process which includes a SNAPJAW at an incredible price.  Click here to learn about their cool product and help out these entrepreneurs.  They have 22 days left to raise $37K+.  If 10% of you participate at the $149 level, they have raised their money, and you will get a SNAPJAW ahead of everyone else and be the envy of the neighborhood.  That’s the power of the Sunday Brief.

As the title of this week’s Sunday Brief implies, we are entering a new phase in the Broadband Wars.  Last August, with recently introduced shared data pricing plans for consumers from AT&T and Verizon Wireless, the telecom world entered a brief “Golden Age.”  Revenues and margins were actually beginning to rise, smartphone and new application rollouts were keeping the industry hip and innovative, and new and faster networks were either promised or already implemented.  Capital was widely available on excellent terms, and valuations were good enough to attract foreign investment.  Life was grand.

As many of you point out to me each week, there are still profits, but golden is not the word to describe where the wireless industry is headed.  More postpaid customers are headed into no-contract arrangements (even for families), and data allocation between devices is not easy to understand and forecast.  Ubiquity of the iPhone and Galaxy lineups across the industry makes it easier to switch carriers, and the gap between new (promotional) and existing customer (upgrade) pricing is widening.  One of you went so far as to add the word “flake” in between Golden and Age.  The industry is by no means in danger of collapse, but the dynamics are changing faster than ever. 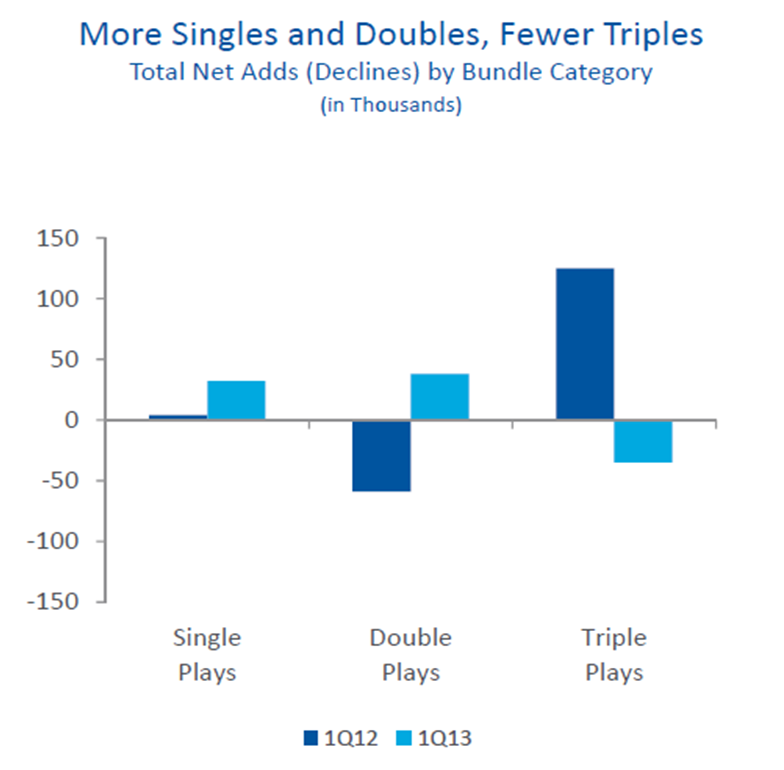 The cable industry is also reaching a turning point.  The Triple Play offerings so popular several years ago have run their course (see Time Warner’s chart at right), and home phone’s attractiveness has waned/ disappeared (Time Warner Cable lost 35K residential subscribers in Q1 and revenues are headed lower).  Video margins are sinking (Time Warner’s video subscriber base sank by 119K subscribers in the quarter driving down revenues 1.5%, with programming costs rising 6.8%), with viewers increasingly being peeled off to device-specific third-party content options.  Cable values are continuing to rise solely because of two product lines – High Speed Data and Commercial (Ethernet) Services.  With the exception of Comcast (who now owns NBC Universal), the relationship between cable and content is as divisive as ever.  Something’s gotta give.

Next we enter the “Now What?” phase in telecom.  This is where marketing, product, and distribution replace network milestone metrics.  Capital spending levels begin to fall (as witnessed by AT&T’s $4 billion revision to total Project VIP expenditures), and retention and loyalty become the buzzwords (again) for the industry.

This is a mammoth reset of the base, and, while it has little effect on revenues, does highlight subscriber volatility (vs. postpaid) in this segment.  Sprint begins the second quarter with an active user base equal to 4Q 2011 levels.

These questions have not been answered.  They require a keen understanding of the customer base, applications market, chipset costs, in-building coverage and cloud computing.  Frankly, they can be answered without regard to Rich Communications Services (higher quality voice for those 25 minutes or fewer that one fifth of the postpaid base uses) or VoLTE adoption.  Marketing takes center stage, and network, while critical, moves into the background.

Twenty years ago, the long-distance industry faced the same dilemma – multiple competitors, similar networks (after a decade of fiber deployments), and arcane regulatory structures.  After Sprint rejected the idea (folklore confirmed this week through my Sprint sources), MCI proceeded to aggressively roll out a billing change called Friends & Family (F&F).  As this link to the commercial implies, 1990s-style data mining led to a five million customer shift in just about a year.

It’s time for another “F&F.”  Cable needs it.  Wireless (except Verizon Wireless) needs it.  What coalition will lead this next phase in the Broadband War?   Will the cable + VZW relationship create “Double Data” bonuses for all VZW families who are also Comcast, Time Warner or Cox Triple Play subscribers?  Will super-fast in-building deployments (paid for with Project VIP capital) reward all of those “Bring Your Own Data” devices with free or discounted service if they use AT&T in the office(but not Sprint or T-Mobile)?   Will Salesforce develop a premium product which pays for additional LTE data charges incurred by mobile users?

These are all within grasp.  They are not technological triple somersaults.  But they require targeted messaging, an experimental culture, and flexibility.  Marketing is the critical element in the next front of the Broadband War.  New alliances will create strange bedfellows.  The action begins in 2013 – stay tuned.

For more detailed analysis and daily updates, bookmark www.sundaybrief.com on your website.  Thanks again for the many Sunday Brief referrals.  If you have friends who would like to be added to this email blog, please have them drop a quick note to sundaybrief@gmail.com and we’ll add them to the following week’s issue.  Have a terrific week!