2015 Halftime Report: Verizon on Edge and AT&T through the Knothole 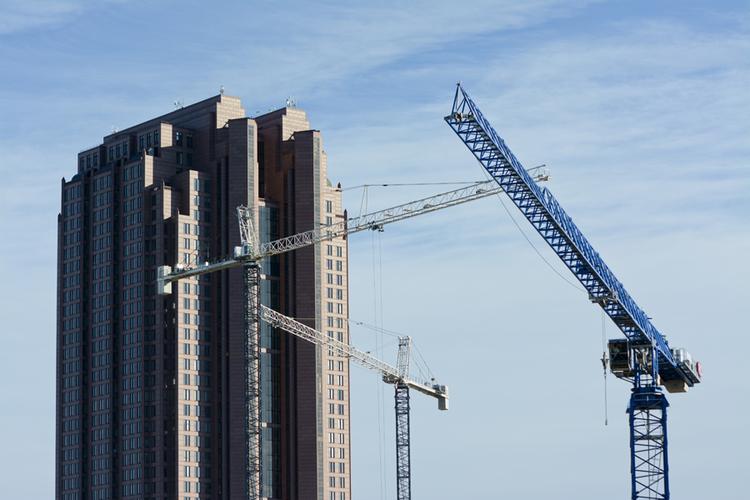 Greetings from New York City, Charlotte, and Dallas (pictured – cranes have become a part of the urban landscape).  It was good to see many of you at the Wells Fargo Conference on Thursday where I was honored to be the morning keynote speaker.  Davis Hebert and Jennifer Fritzsche were terrific interviewers, and I hope to have a link to the audio feed soon.

This week’s Sunday Brief will focus on AT&T and Verizon earnings.  While there were many other significant events that warrant additional review, their implications will have to wait for another week.  In the meantime, here’s a link to five of those events:

Verizon led off the earnings parade this week on Tuesday, and the headline was their anticipated growth rate (3%) compared to their previously stated growth rate (4%).  The primary reason cited by Fran Shammo, Verizon’s CFO, was the Edge take rate:

…Some of the other changes in the assumption fact is the take rate of Edge. I would tell you we never anticipated that Edge would accelerate as much as it has, and looking forward into 3Q being at 60%, that’s much higher than we had anticipated. But the market has moved us there…  Coming into this year we knew that service revenue would dilute. We are seeing more dilution than we anticipated because more customers are selecting that Edge plan.

Moving customers from subsidized to Equipment Installment Plans (EIP) isn’t easy, and a higher percentage of customers moved to EIP-based plans than anticipated (49% in 2Q, up from 38% in 1Q and over twice the 2Q 2014 of 18%).  With each EIP line conversion, $15-25 moves from service to equipmet revenue.  Worst of all, this transition is just beginning for Verizon, with 16% of the retail postpaid base converting.

Even with all of these changes, Verizon still managed to grow its segment, service, and overall operating margins.  Those trends are likely to benefit from increased EIP conversions in the short term (less subsidy costs taken into the “Cost of equipment” line item).

Edge/ EIP is a transitional event.  It is not a statement of Verizon’s cost competitiveness.  In fact, with more dark fiber leases going into the ground and 700 MHz purchased at what looks like a fairly attractive price, one could argue that for the next several years, Verizon could grow their margins considerably.  What will trigger this growth?  Video, whether it comes from their summer launch or from continued “price ups” in the traditional buckets.

What should put the telecom community on edge (pun intended) is Verizon’s deteriorating wireline performance.  Yes, they are selling three island properties which may have taken some wind out of the marketing sales for Tampa, Irving, and California, and yes, Time Warner Cable came back roaring with aggressive New York City/ New Jersey promotions after their Comcast merger was scuttled, but the wireline business is sick, and price/ promotion in the Northeast seems to be Verizon’s only way out.  Technology/ speed is not resonating with potential cable (or DSL) converters, and this should be very troubling.  More on this when TWC announces what should be strong subscriber numbers on Thursday.

Bottom line:  Verizon will grow their way out of the EIP transition.  How soon depends on data growth.  The real worries should be the ability to execute a new line of business launch (not done since FiOS and that was a new network and not a content broadcast business) and the ability to manage the DSL and TDM (circuit-switched voice to packet voice) transitions in their wireline business.

AT&T:  Through the Knothole?

AT&T announced earnings on Thursday after the markets closed (but before the FCC officially approved their merger with DirecTV).  There were many things to be encouraged about with AT&T’s current state, but the most important development was that they appeared to have hit the important subsidy-based to equipment installment plan conversion milestone.  This drove phone-only ARPUs sequentially higher (see below) and phone-only + Next billings to historical highs:

Driving the phone-only ARPU is the fact that AT&T is beginning to see upgrades from the $100 for 10 GB data plans to the $130 for 15 GB and $150 for 20 GB levels.  Even with the addition of a one month rollover buffer (a smaller knothole added in response to T-Mobile’s Data Stash plans), ARPUs grew. 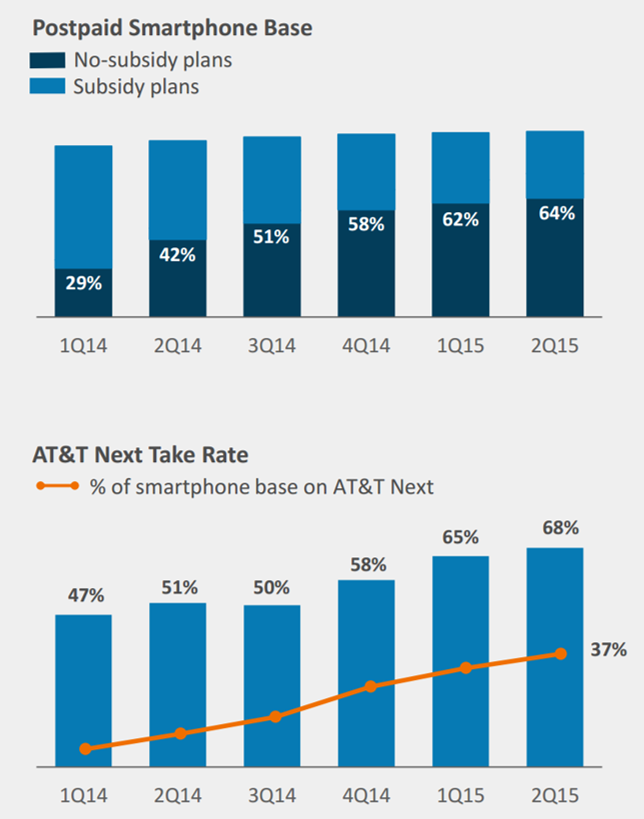 What allowed AT&T to pull through this plan change knothole so quickly?  As the chart above shows, the massive ARPU decline resulted from their decision to allow existing customers (smartphone customers prior to Feb 2, 2014) to switch to the Mobile Share Value plans (including the $15/ month unlimited talk and text plan) with no termination penalties. With 77% of smartphones already on MVP, and 37% of the base already on Next (see nearby picture), AT&T now has to manage the impact of additional Next conversions (especially during the next iPhone cycle).

AT&T is through the worst of it.  Even with rollover, vacation schedules will drive phone-only ARPU higher (see 2013 and 2014 2Q to 3Q changes), and the fourth quarter iPhone cycle will continue the trend.   While postpaid phones continue their slow decline as customers leave for other carriers (likely Verizon and T-Mobile), the value from the existing base continues to grow.

Also worth noting in comparison to Verizon is AT&T’s improvement in prepaid metrics (Verizon’s prepaid and wholesale businesses get minimal focus compared to postpaid retail).  Rather than decommission Cricket, AT&T revived the brand and the prepaid subscriber base is now larger (both growing faster and churning less) then when AT&T combined AIO and Cricket a little over a year ago.  AT&T’s CFO John Stephens seeemed very comfortable with the tradeoff between Cricket and AT&T brands:

… on the prepaid side with both our Cricket and GoPhone brands, we added some premium customers. I think I mentioned that two-thirds of our Cricket customers are buying out of the higher plans. Those are $50, $60 month plans… And those ARPUs are higher than the feature phone ARPUs we are losing and quite frankly, higher than a lot of – some people in the markets postpaid ARPU. So we are getting great tradeoff…there is very low acquisition subsidy costs with regard to those customers. We did sell over 7 million smartphones through the – in the quarter. A lot of those were in our prepaid space…Beauty of it is that the customers are satisfying the financial requirements of those phones such that it’s allowing us to keep our margins up.

From these and other recent comments, AT&T does not appear to be punting on Cricket any time soon.

While AT&T seems to have pulled through one knothole, the transformation of AT&T as a result of the DirecTV merger represents a “make or break” event.  As the metrics above show, AT&T’s wireline broadband metrics were weak, and transitioning video customers from U-Verse to satellite is not as easy as it appears (versus Sling and other emerging over the top alternatives).  And, while AT&T was quick to take credit for reaching 900,000 small and medium business locations with fiber, it’s not clear from the second quarter broadband figures that it actually helped stem the exodus to commercial cable offerings (Comcast had over 20% or $200 million annual growth in 2Q, yet only has 25% penetration in small and less than 10% in medium/ regional businesses).

Bottom line:  While one knothole has been cleared in postpaid wireless, and AT&T has successfully integrated Cricket into the larger wireless portfolio, broadband continues to be weak.  AT&T faces a substantial challenge with new in-region satellite products, continued bandwidth disadvantages compared to cable in residential broadband (cable will likely account for more than 100% share of decisions relative to their telco breathern), and small business will become a highly competitive battlefield for the next several years.

Next week, we’ll fold in T-Mobile, Comcast, and Time Warner Cable earnings (Spolier alert:  they will all be strong).  Until then, if you have friends who would like to be added to The Sunday Brief, please have them drop a quick note to sundaybrief@gmail.com and we’ll subscribe them as soon as we can (and they can go to www.sundaybrief.com for the full archive).  Thanks again for your readership, and enjoy the remaining weeks of summer!