The Sunday Brief: Why CES is Important (CES Preview Edition) 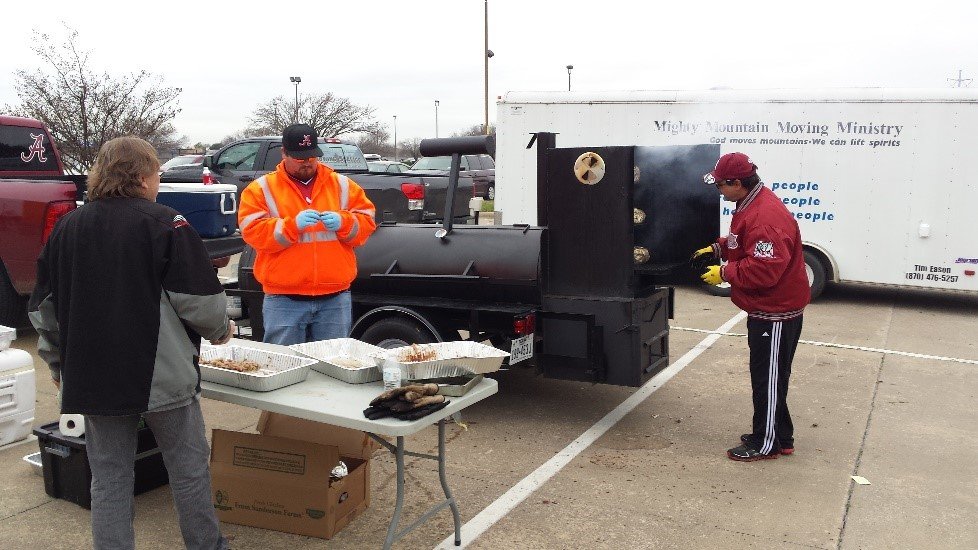 2016 greetings from Kansas City, Springfield (MO), and Dallas (volunteer crews from Alabama serving BBQ to victims of the Rowlett, Texas  EF4 tornadoes, pictured.  Thanks to Tom Osvold for volunteering and sending the photo). Our hearts and prayers go out to the victims of the flooding and storms throughout Missouri, Oklahoma, Arkansas and Texas.

As most of you will agree, 2015 was a mixed year at best for the telecom industry.  Wireless subscriber growth (especially for higher ARPU smartphones) slowed, but housing showed signs of recovery which increased homes passed and High Speed Internet connection opportunities.  The scope of regulatory reach was much smaller than most anticipated, yet uncertainty remains for businesses and carriers alike.  The stock market was flat but so was the cost of borrowing.  Mixed just seems like the right word.

This week’s Sunday Brief will touch on two topics – public company equity value creation, and the upcoming Consumer Electronics Show.  In other words, a look back and also a (long) look forward.

Below is the chart we have been using for some time to track who is creating value.  While the purpose of this chart is not to precisely identify the exact amounts of value created, it does provide some indication about who is headed in which direction.  Here’s the latest snapshot: 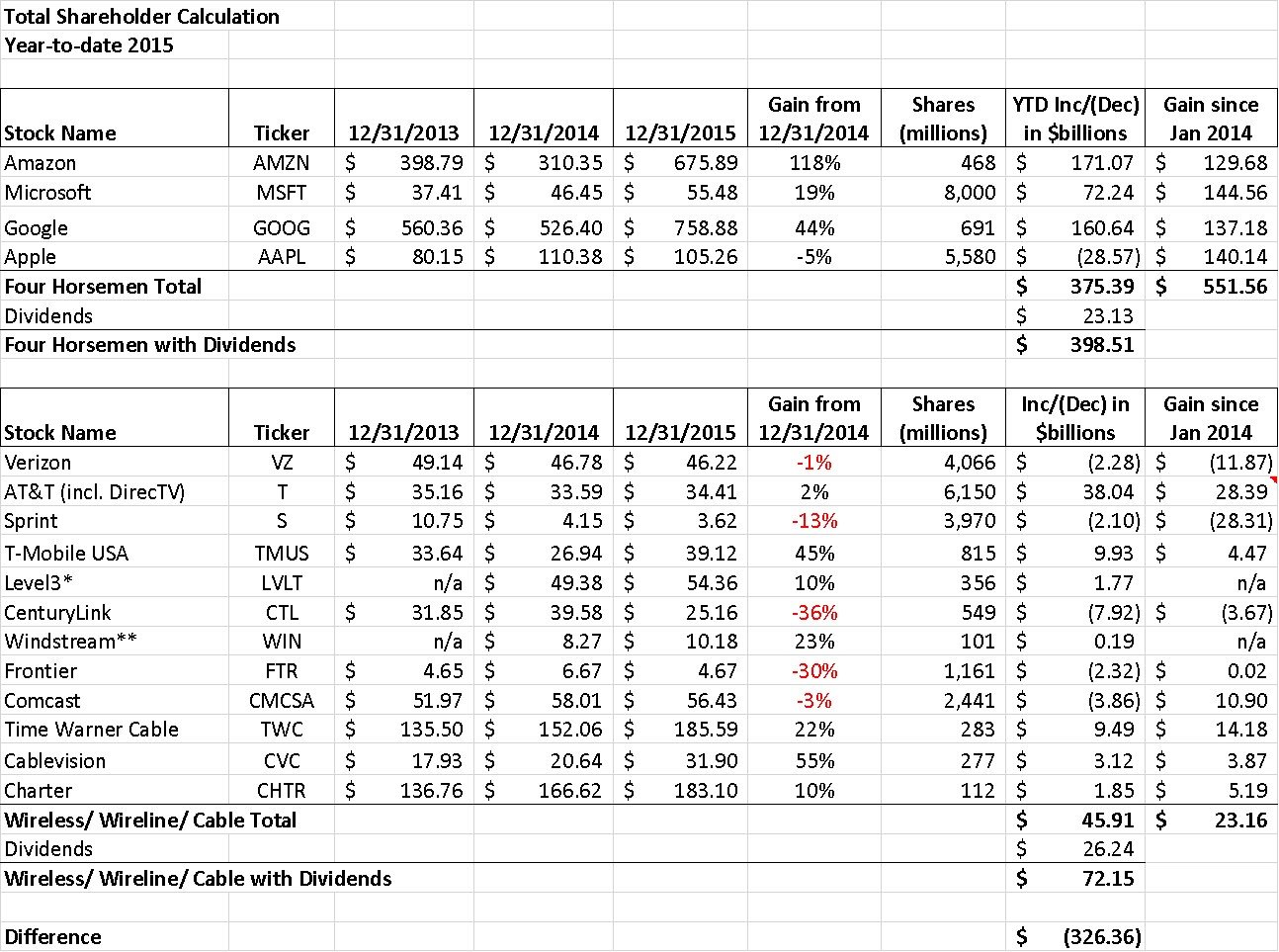 Of biggest note is Apple’s decline in overall market value in 2015.  This loss is somewhat offset by Apple’s dividend ($12 billion), but also could have been worse had Apple not repurchased ~ $13 billion (120 million shares) in stock.  Investors need not worry about Apple’s liquidity, however, as they still have ~$150 billion in negative net debt (total debt less cash and marketable securities).

While Apple was marking time, Amazon, Microsoft and Google Alphabet were racing to grow their presence in cloud services.  Amazon appeared to have been the big winner in 2015, with total equity value up 118% and an ending market capitalization of $317 billion (Amazon’s equity market cap is now $120 billion more than Walmart and $180 billion more than IBM).  While many will argue that Amazon’s logistical improvements are driving increased value in the stock, this year’s gain was more than likely due to the gains made from Amazon Web Services (AWS).  For a good article on the history of AWS, read on here.

With dividends, the Four Horsemen added just under $400 billion in value this year (as a reminder, the Dow Industrial Average and S&P 500 were both down in 2015).  Including the Fifth Horseman (Facebook was not public in 2010 when we started tracking value creation), they are closer to $460 billion… in one year.

Meanwhile, the telecom industry had a flat to down year for equity values.  Most of AT&T’s value creation came from issuing new shares to acquire DirecTV in August (~ $34 billion).  Without this share issuance, and T-Mobile’s gain which came as a result of organic growth and outstanding management, the industry as a whole would have been close to negative ($44 billion of the $46 billion in equity market value increase was due to these two events).

Interestingly, Time Warner Cable, who is in the process of being acquired by Comcast Charter, continued to increase in value, rising another 22% or $9.5 billion in value.  While many of us scratched our heads when John Malone’s Liberty Media Group took a 27% stake in Charter Communications at $95.50/ share in March 2013, it has turned out to be one of the best investments of this decade, having produced a paper gain of over $2.6 billion for Liberty in less than three years.

Meanwhile, CenturyLink and Sprint combined for close to $10 billion in equity losses in 2015 and $32 billion over the past two years.  While most expect Sprint to operationally recover in 2016, financial (balance sheet) recovery may take considerably longer as the company works through some hefty debt repayments (see last week’s Sunday Brief for more on the topic).

The traditional telecom industry (and their partners such as IBM and Accenture) is losing to new entrants at a rapid rate – first in applications, then in voice-over-IP and managed hosting, and now in cloud services.  This is not a one-time event, but a multi-year run as many long-time Sunday Brief readers can attest.  Wireless services have produced tens of billions in value, but that pales in comparison to the value created over the last decade by Facebook, WhatsApp, Skype, YouTube, Chrome, Android, iOS and iTunes.  Verizon is trying to stem the flow through Go90 (see milestone achievement here), but there need to be many more innovations to reverse the current trend.

Why CES is (Still) Important

I have talked to many of you about attending CES this year, and to my surprise have found some regular attendees choosing to stay home and monitor the event through social media.  While it’s a logistical challenge, CES is still very relevant to those in the telecom and Internet industries.  Here’s why:

For those of us who like to look and touch what’s new, but don’t necessarily have the money (or space) to buy, CES provides the ultimate playground.  Beyond the sizzle and flair, however, there are big bets being placed on companies and standards that exhibit at CES.  Because this first-of-the-year trade show draws broad audiences, which in turn stimulate broader conversations, it should not be missed.

That said, here’s five questions I am hoping to see answered at the show:

That’s it for the CES preview.  Next week, we’ll recap what we (and you) thought were the most (and least) attractive parts of CES and look for hints of earnings news from an investor conference occurring in parallel with the show.  Until then, please invite one of your colleagues to become a regular Sunday Brief reader by having them drop a quick note to sundaybrief@gmail.com.  We’ll subscribe them as soon as we can (and they can go to www.sundaybrief.com for the full archive).  Thanks again for your readership, and Go Chiefs!