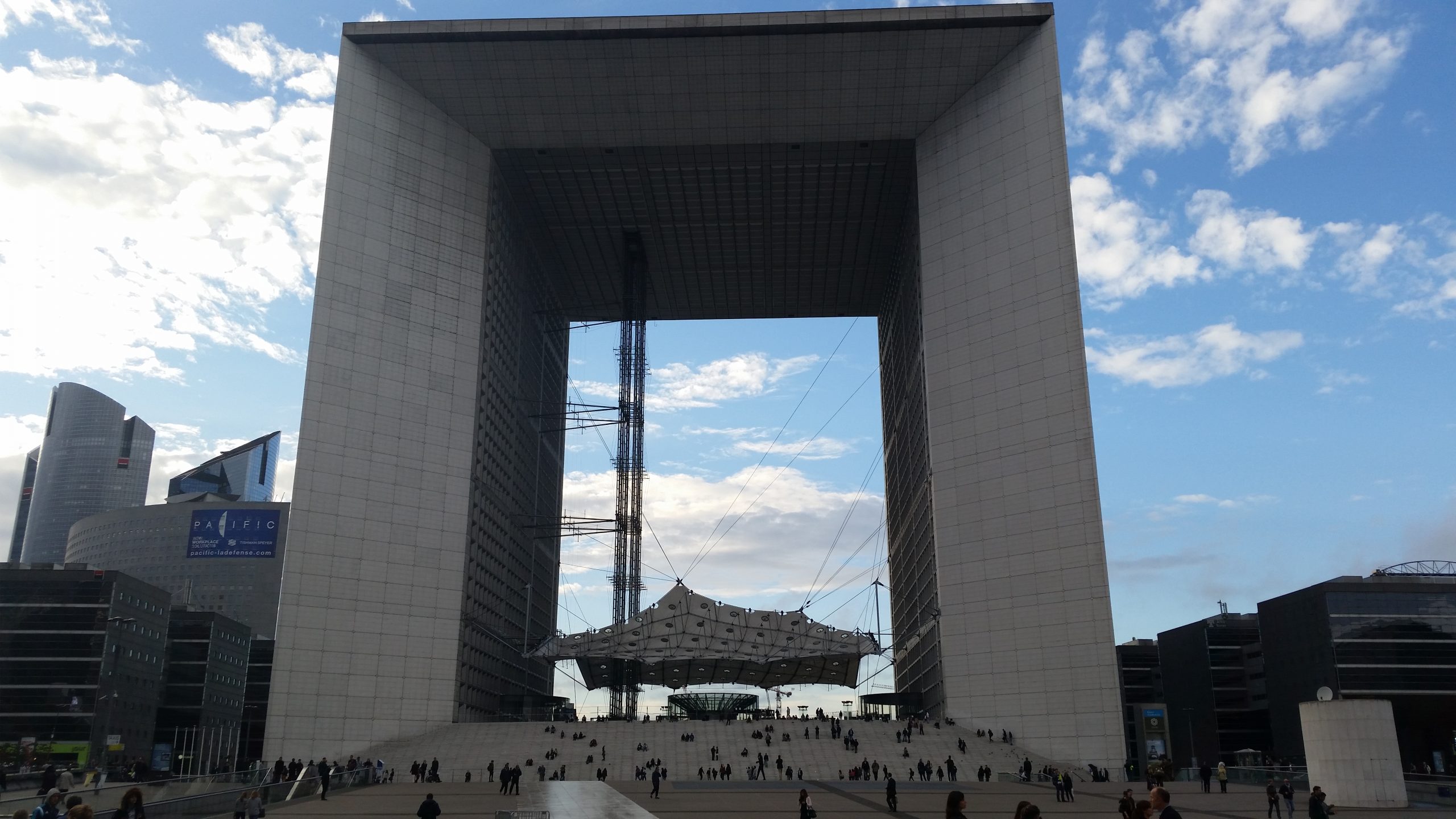 Greetings from Paris and Dallas.  This has been an event-filled week outside of third quarter earnings news, with the FCC placing both the Comcast/ Time Warner Cable and the AT&T/ DirecTV merger review processes on hold (see announcement here).  Also, Friday afternoon, the FCC announced that the 600 MHz auction was going to be delayed until 2016, the second delay in a year for this critical and valuable asset (see the FCC blog post on the topic here).

The delay in the incentive auction is the more troubling of the two announcements.  With data consumption continuing to grow at a rapid clip, delays place more pressure on an efficient auction process and will undoubtedly drive up bids when it ocurrs.  It will slow down development of equipment and other technologies that are needed to maximize speeds and utilization for the 600 MHz frequency.  This event may even drive up prices for the AWS auctions which begin in a few weeks.

The US regulatory process is not the primary topic of The Sunday Brief, but when the government acts (or, in this case, fails to act), the consequences can be significant.  The placement of this auction in the eighth year of a two-term administration will bring new challenges.  Based on the case that is currently in the courts, I would not be surprised to see an actual late 2016/ early 2017 auction date (presumably under a new FCC Chairman).

Both Verizon and AT&T announced earnings this week, and their results confirmed several standing hypotheses:  1) Scale matters; 2) Accelerating change is hard with larger companies; 3) Transitions between technologies take more time than most expect.  These insights are not news to most of The Sunday Brief subscribers.

One of the hypotheses that is new, however, is that AT&T and Verizon are creating competitive advantage in different ways.  Both are at scale in LTE, and both have implemented metered plans and are reaping the benefits of increased data usage.  While Verizon had an excellent quarter of tablet sales  (1.1 million of 1.5 million postpaid retail net adds were from tablets), AT&T has a huge headstart with five years of embedded Amazon Kindle and iPad sales.

Verizon seeks to create competitive advantage through operational excellence in wireless.  Whether it’s increasing use of fiber Indefeasible Rights to Use (IRUs) for cellsite backhaul in major metropolitan areas or the structured rollout of the AWS spectrum over the past year, or the acceleration of their eMBMS (wireless multicast) efforts, Verizon focuses on delivering technology consistently and efficiently to each of its subscribers.

However, Verizon is also a financially focused company, especially in the non-Vodaphone world ($109 billion in gross and $102 billion in net debt after their buyout).  This discipline is one of the reasons why Verizon did not follow AT&T’s move to allow existing customers (under subsidized devices) to opt into more attractively priced bundled data plans.  Both Verizon and AT&T offer 10 Gigabyte shared plans with unlimited voice and text for four lines for $160, but existing customers cannot make the transition to these plans as easily at Verizon. As a result, service revenues continue to grow at Verizon (4.8% annually) and are flat at AT&T. 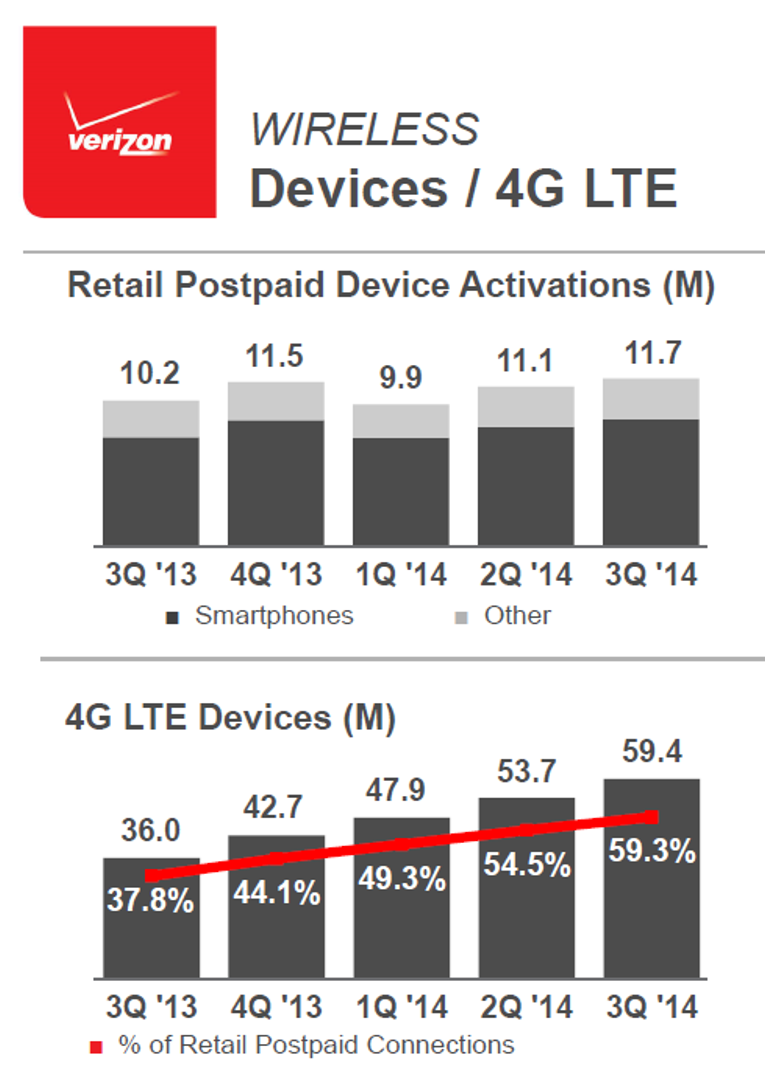 As a result, Verizon touts a 49.5% EBITDA margin (AT&T’s comparable margin = 35%) and has no issues with 12% of 3Q gross additions selecting the Verizon Edge (monthly phone payment) plans (although they noted that this figure will be 20-25% in the fourth quarter).  With Verizon, the issue is the pace of change and the associated financial impacts of acceleration, not the overall direction.

AT&T, however, takes a very different view, focusing instead on intermediate to long-term financial impacts and product/ system-related competitive advantage.  The integration of technology, especially in the home, drives AT&T’s investments.  Verizon has no equivalent product to Digital Life (currently at 140,000 subscribers in 82 markets, and which will be a big grower for AT&T in 2015).  They have different approaches to connected vehicle (AT&T had 500,000 embedded modules in 3Q and this figure will be in the millions in 2015).  Even U-Verse and FiOS take very different approaches to address marketplace needs (FiOS added 162K broadband customers in the quarter; U-Verse 601K).

AT&T clearly sees the transition to Mobile Share accounts as “Phase 1” of a multi-part strategy.  The first step is to make the transition to shared plans easy by allowing existing customers to make the change with no immediate penalty (all of these customers will need to upgrade to their monthly phone payment plan called AT&T Next when their contracts expire).  Have customers get used to the concept of sharing data before adding on the additional phone payment charges.  Nearly 17 million accounts representing 47 million connections have made the change, and this customer-friendly policy has resulted in record low post-paid churn.

In parallel with the migration efforts, continue to develop products and services (or partnerships) to make the Mobile Share a competitive weapon.  Want to add your car’s data consumption to your Mobile Share plan?  No problem.  Want to add data used by your home security (camera) system to the mix?  No issue.  Want to use AT&T’s in-flight services but afraid of increased data consumption?  It all comes from the same data bucket.  (On the flip side, AT&T also has fully developed sponsored data platforms which could add to monthly bucket levels).

If Digital Life, connected vehicle, and in-flight services were not enough, AT&T is currently creating a software development platform that is designed to be compatible with Silicon Valley and not (traditional telco) Basking Ridge partners.  While the risks from this platform development are enormous, AT&T will be able to activate new products and services more quickly than their competitors when the IT is implemented. 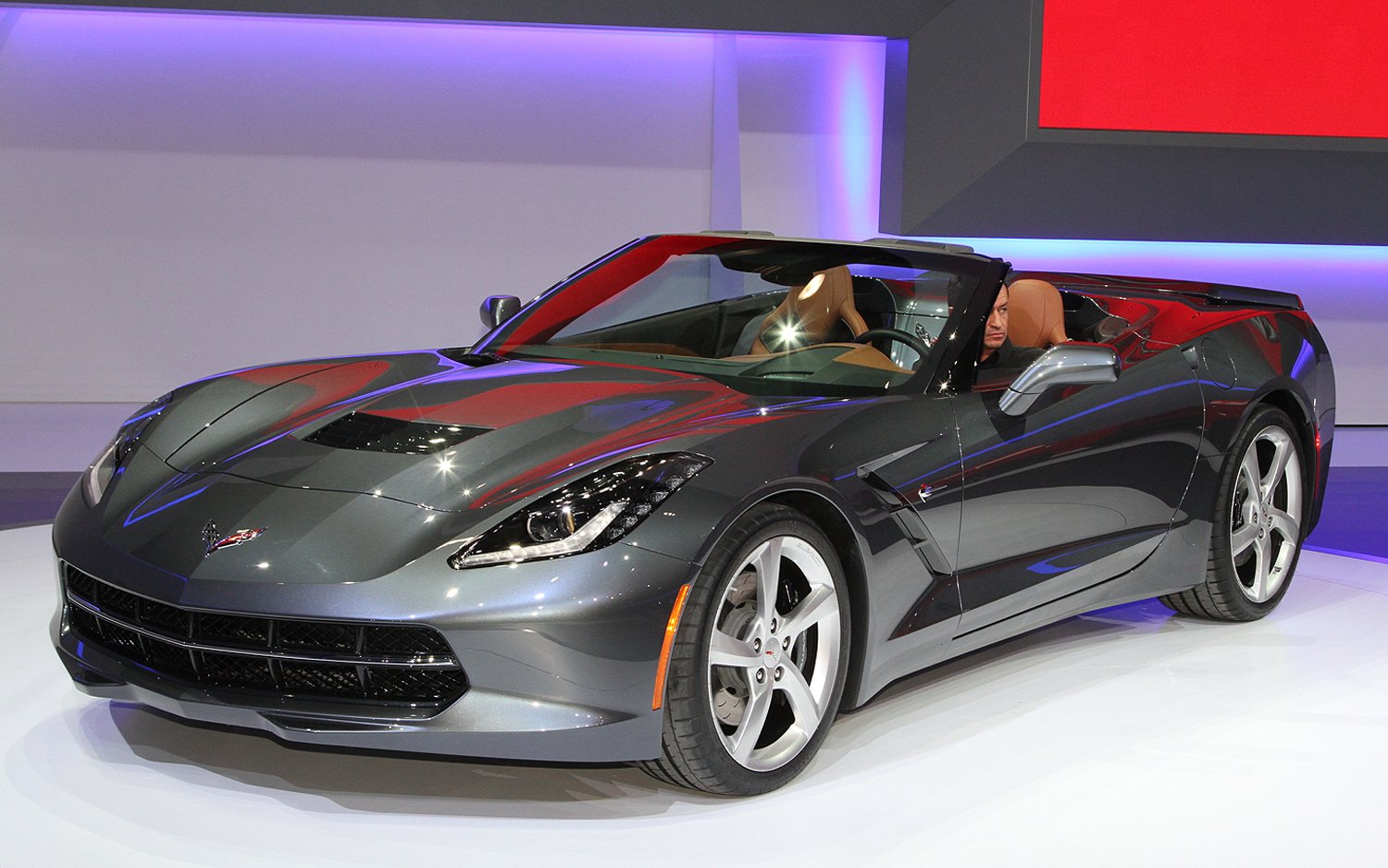 AT&T has expanded their scope to include their wireline assets as well.  On their conference call, AT&T announced that two thirds of their U-Verse video platform footprint has access to 45 Mbps speeds and that their overall broadband footprint now reaches 57 million locations.  While their speeds cannot match those of FiOS today, AT&T’s GigaPower fiber initiatives across 17 markets will be able to compete with multi-hundred Mbps cable offerings.

AT&T is changing their structure:  From systems to products to internal organization, the theme of an “integrated end” is clear.  It’s a very hard path to execute, especially with T-Mobile and Sprint strengthening their competitive offerings.  If they are successful, the opportunity to drive long-term shareholder value will not be in doubt.

While there is not enough time or space to chronicle Microsoft’s earnings, the result of their earnings announcement was very clear: 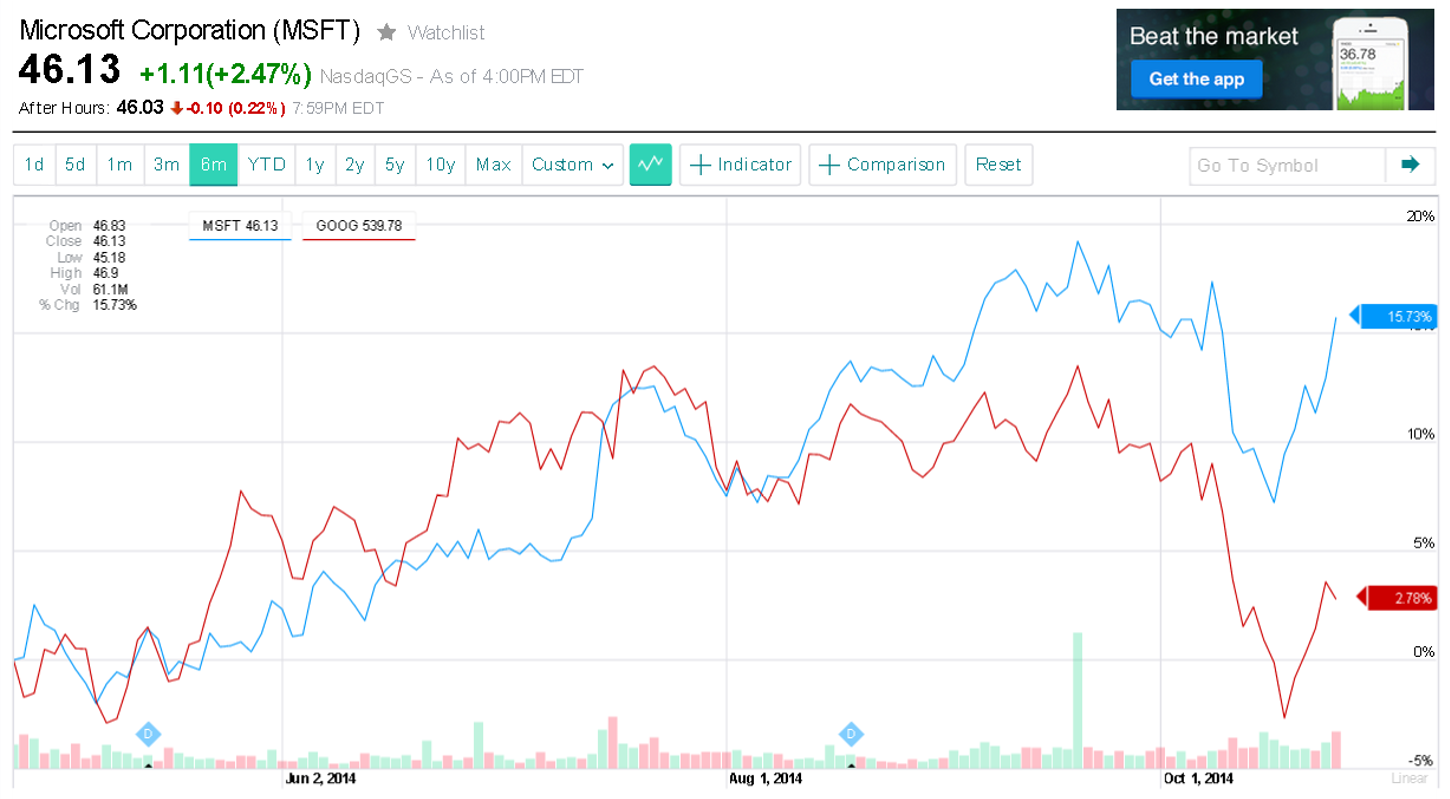 Over the past six months, Microsoft has quietly overtaken Google in market capitalization (as of October 24, MSFT’s market cap was $380 billion, and GOOG’s was $366 billion).  This would have been unthinkable in a pre-Nadella era.  We’ll go into greater detail about how this is occurring in a future Sunday Brief, but Microsoft’s transformation is headed to be one of the big stories of 2014 (and 2015).

This reiterates a theme noted by several of you that the Valley is too volatile (“daily TechCrunch headline-focused” was one term) to create competitive advantage.  While that might be true (I think it’s overblown, but there’s some evidence that the Valley is receiving significant competition from Austin, Chicago, Kansas City and Atlanta), this is more about the changes occurring in Seattle, not Valley happenings.

The Level3/ tw telecom Merger is Approved:  What’s Next?

Rather than doing a poor job of covering Comcast’s terrific earnings (see here for full set – we’ll cover more when Time Warner Cable, Cablevision and Charter announce earnings), the closing comment will be devoted to Level3.  On Friday, they received word that their merger with tw telecom was approved by the FCC (announcement here).

Besides acquiring a great company, the tw telecom acquisiiton strengthens their domestic footprint and creates an opportunity to drive additional cloud and data center services to tw telecom’s customers.  Level3 has a storied history of implementing locally-focused acquisiitons (Telcove, ICG, Progress Telecom, and Looking Glass Networks were difficult to integrate and created a lot of customer headaches), but tw telecom has a terrific back office and has no acquisition history.

The resulting asset (Tier 1 backbone, 21K+ fiber-fed buildings, lots of fiber, enterprise and carrier focus) is ready made for Sprint or T-Mobile (or both) to form an in-building high-speed data network.  Level3’s ability to create an additional $5-10 billion in shareholder value depends on better asset utilization.  Looks like the seeds of a successful partnership are in the making.  For a good overview of the asset Level3 is buying, click here for the latest (and probably last) Investor Presentation from tw telecom.

Next week, we’ll continue our discussion of third quarter earnings.  Until then, if you have friends who would like to be added to The Sunday Brief, please have them drop a quick note to sundaybrief@gmail.com and we’ll subscribe them as soon as we can (and they can go to www.sundaybrief.com for the full archive).